My Margherita Pizzas that don’t exist…

There’s an old joke about timing.  “What’s the secret of telling a good joke?  TIMING!”  Of course, “timing” has to be said loudly and right over the end of the question.  Teach a little kid that joke and you’ll have a comedian on your hands.  Here’s a wonderful rendition of the joke I found on the internet:

Ok, so that’s pretty funny, right?  You can’t help but smile at these two lovely women working on that joke!

So, timing — how does that relate to a Margherita pizza that apparently doesn’t exist?  Well let me tell you.  A friend sent me an great article that I knew I had to share here on Pizza Quest right away.  What I didn’t know until now was how much it would help me explain to you about a couple of pizzas I made recently. 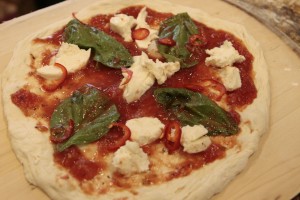 Is this a Margherita Pizza?

First, I highly advise that you go read this article.  It’s well worth it — pizza culture comedy at it’s best!

The article is called  The Day I ordered a pizza that ‘doesn’t exist’ written by Dany Mitzman of Bologna, Italy for BBC News Magazine.

Because last week I made the mistake of asking her for a marinara – which is a simple tomato and garlic pizza – with the addition of mozzarella.

As soon as I say the words, Emanuela looks at me with disbelief and, in retrospect I realize, disgust.

“You can’t have a marinara with mozzarella,” she says. “It doesn’t exist.”

OK, you’re laughing, smiling, and thinking about it, right?!  Great article!  It reminded me of a time when Turkey Burgers were thought of as a type of burger not as an option instead of a burger.  A place I loved to go to in Playa Del Rey, CA which has sadly closed, was called Outlaws.  They had BIG burgers and they were all really good.  The burger names were in theme with the rustic western-style pub/burger joint:  The Outlaw, The Outlaw Gang, The Desperado, Annie Oakley, Al Capone, Belle Starr, Pancho Villa etc.  Great burgers!

Does this Fresno Chili belong here?

I remember ordering one of my favorites, called the Al Capone, that had mozzarella (shocker, as it turns out), grilled peppers and onions, with sliced avocado.  I had been enjoying this giant juicy burger here for some time and one day decided to order it as a turkey burger.

“Can I have the Al Capone as a turkey burger?”

The waitress pointed out that the turkey burger came with cheese, lettuce tomato etc.  I looked at my menu and there it was down below all the cool Burgers – – I forgot to mention the Jack the Ripper that sported bacon, bleu cheese crumbles and the rest of the business.  There it sat like it was a signature burger – The Turkey Burger.

I looked back up the menu at all the other burgers and then back up to the waitress and said, “Can I get an Al Capone, but instead of using a beef patty, just use a turkey patty?”  I waited nervously for her answer looking over to my wife who probably thought I was being difficult.  I could have taken the turkey burger and added mozzarella, grilled onions and peppers, but instead I thought it just made sense to ask for the burger I wanted – The Al Capone!  The Al Capone is what brought me there.  I didn’t decide to go to Outlaws for nothing.  I thought of the Al Capone and found myself at Outlaws later that day, or later that week.  I didn’t want a Turkey Burger with Al Capone stuff, I wanted THE AL CAPONE with turkey.  Right? 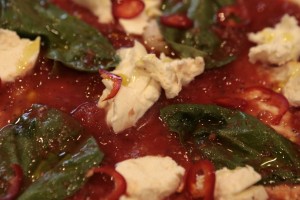 After a little back and forth and a second attempt to explain my outrageous request the waitress said she would go check with the chef about my off the menu order.  Ok.  I had a cold beer.  I was fine with this.  What could he say?  Luckily, the chef agreed with me.  It was just as easy to make the Al Capone with a turkey patty as it was with a beef patty.  I ran into this same problem for a while when veggie burgers came out.  They were always another sandwich on the menu instead of an option.  Most people wouldn’t be swapping out a beef burger with a veggie patty on a double bacon cheeseburger, but the veggie patty can be darn good and a great substitute for a meat patty — as long as you can have your burger and eat it too!

Timing!  We’re here about timing and pizzas that don’t exist! 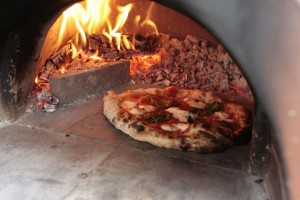 Just add the fire and watch the magic happen!

I recently made up some Margherita pizzas with some Neapolitan Doughs I had made.  I was making that delicious fire roasted seafood pizza I wrote about a few months ago, and had a left over Fresno Chili.  I am always working on perfecting the Margherita pizza which, to me, represents pizza in it’s simplest purest form.  First, you need a great dough.  Then great tomatoes, some quality fresh mozzarella and basil.  The art of a good Margherita is about finding the balance between the sauce, the creamy mozzarella and crust that is crisp, but chewy and slightly charred.  Truth be told, my version of “slightly charred” may be considered charred charred to some.  Also, while snapping photos of my pizza in the wood burning oven the exit timing often gets tested, giving me even a little more char.

Quick Recipe for my “Fresno Chilis on a Magherita Pizza”: 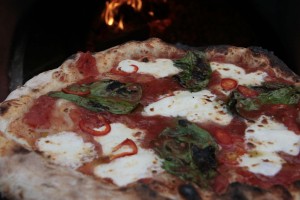 As you can see from the photos I played around with the shape of the pizza for fun.  Same ingredients, but different delivery.  I can report that they tasted the same! 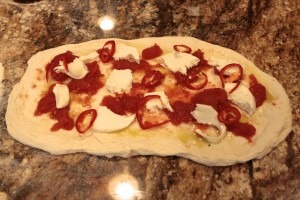 Then I went off the rails. I let this dough be what it wanted. It just didn’t want to be round.

For the tomato sauce, get the best tomatoes you can buy — the Bianco DiNapoli tomatoes are available online if you can’t find them in a store locally and are well worth the effort to find them.  After tasting these, you’ll see that many other brands fall far short but you may have your own favorite.  I hand crush the tomatoes and add in the ingredients from Peter’s Hand Crushed Tomato Sauce recipe *Link.  This simple pizza sauce transformed my home pizzas when I first tried it.  It is so simple to make and so delicious. 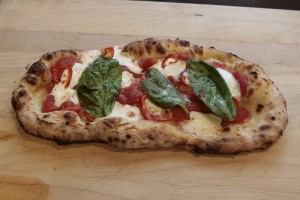 Pretty nice! Now, this is a Fresno Pizza with some other stuff on it loosely similar to some other familiar pizza…