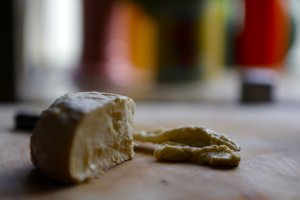 I think I stumbled onto something here. I was out market foraging one day recently and a little round of cheese caught my eye. It was a Cowgirl Creamery Triple Cream called Red Hawk. I was looking to make some pizza and I thought maybe I could play around with this, or worst case play around with it over some crackers!

When I got home I tasted it. Yeah, it was amazing — rich and earthy yet creamy and buttery. I knew right away this cheese would add a unique flavor to any pizza I could dream up.

I picked up some beautiful speck I saw, thinking this would pair well with the cheese on the pizza (or, at least, on my crackers!).  I sampled both together and it was great, but it needed something.  I realized the Red Hawk would be best blended with some fresh mozzarella to help balance it and not let it be too overpowering. I wanted the triple cream cheese to be an ingredient, rather than the main event.

What this needed was something tart to cut the creamy/buttery/salty sumptuousness of these flavors. 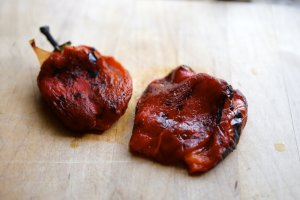 Lemon and vinegar came to mind!  Could this work with thin slices of lemons?  Definitely.  But I had one, measly, aging lemon on the shelf, and my tree didn’t have anything ripe at the moment, so it would have to be vinegar.  I also had a couple of nice red bell peppers and decided to “flash” pickle them. Yum!  This would bring a nice bright flavor, but also a visually beautiful ingredient to literally brighten up the look of the pizza.  We do eat our food with our eyes first, right?!!

Speck *A beautiful deep red cured pork similar to prosciutto.  Any salted pork you like or have could work. 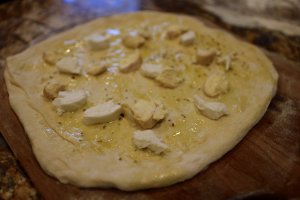 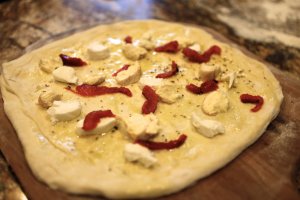 – Roast 2 Red Peppers on the grill, in the wood-fired oven, or under the broiler till charred.

– Place them in a paper bag, or cover in a bowl with plastic wrap until they steam and then cool down, and the skin separates from the flesh.

– Peel off the charred skin and discard.

NOTE: You could also use canned or jarred fire roasted peppers or any variety of pickled peppers, like Italian Cherry Peppers that come sliced or whole.

There are a ton of pickling recipes you can find online. Here’s what I did:

–In a saucepan add ½ cup of water and ½ cup of apple cider vinegar, a tablespoon of sugar, and a good pinch of salt. Heat it up and stir until the sugar and salt dissolve. Pour over the roasted pepper strips. Let them sit for a while (at least 30 minutes) and use what you need for the pizza. Save the rest for later in the fridge.

*See photo.  Such a beautiful ingredient! 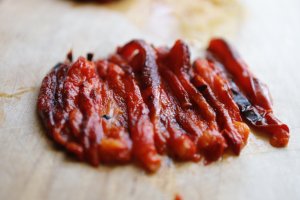 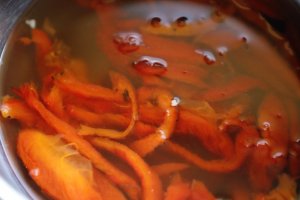 After only about 30 minutes they are ready to use, or you can store them in the fridge.

Drizzle some olive oil on the dough and use a pastry brush to spread it over the surface. Sprinkle on the herbs and spices and hit it with a little black pepper, salt and garlic powder.

Add torn pieces of the speck, or other cured pork. 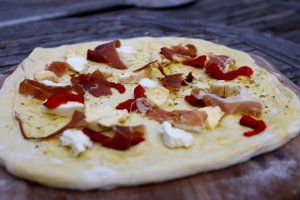 There’s a nice balance of ingredients here. The cheese will melt and spread across the dough and surround the toppings nicely!

Take it to the oven! (In a home oven crank it all the way up use use a stone or baking steel); in a wood-fire, fire it up as you would for a Neapolitan, 700-900 degrees, depending on your oven. 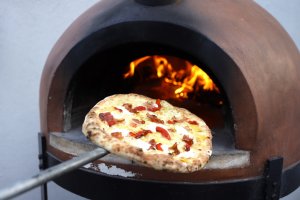 I love the crust on this pizza with just enough char, but also light and perfect for this late spring early summer pie!

Add some fresh basil when it comes out and cut and share! 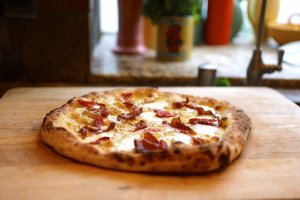 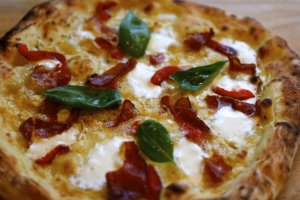 This was a beautifully balanced pizza where each ingredient stood on it’s own, but also worked together. 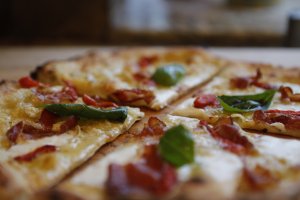 I could almost sense a hint of lemon from these pickled peppers which was one of the things I originally thought to add to this pizza to bring in a little acidic zing. 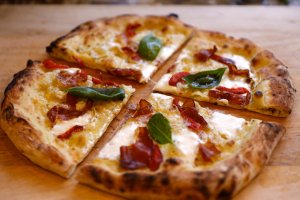 For the record, I rarely make the same pizza twice. I don’t test my recipes before making them for Pizza Quest, or for guests.  I make ’em and eat ’em!  I made this one twice because I knew the family would tear the first one up and I wanted to have more.