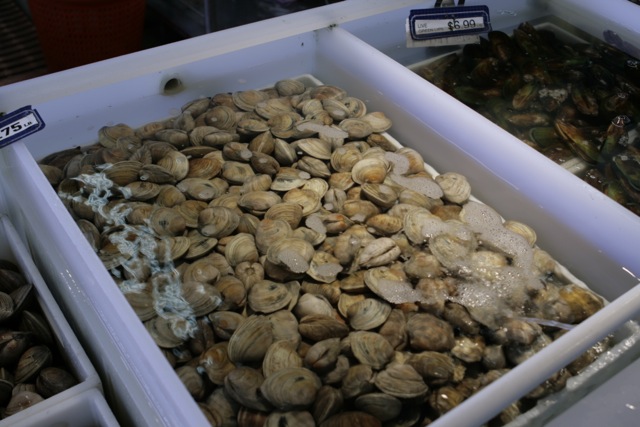 We have a great seafood market called Quality Seafood down in Redondo Harbor.

I decided to make up some clams for a friend’s going away party.  Mike is leaving again to go back to work on the TV show Grimm up in Portland, Oregon.  I don’t think of clams when I think of Mike.  I don’t think of food much either!  Let’s say he’s a little less adventurous than some of us. But, since we’re all gathering for a party, I decided that my contribution would be steamed clams with some great crusty bread.  Maybe Mikey will try it and like it after all?!

I was up early, thinking about what to do.  I browsed the internet for some ideas and remembered the clams we did at the Fire Within Pizza Conference using beer to steam the clams.  My wheels were turning as I made my plan to head down to Quality Seafood Market, one of my favorite seafood places, down at the pier in Redondo Beach.  What I like is that clams remind me of the East Coast or perhaps even something you’d find in the Pacific Northwest — both with far more robust seafood cultures than here in Los Angeles.  We do love our fish tacos here, but the “get your hands in there and tear apart your fresh steamed seafoods” just aren’t as popular here.  We have plenty of ocean, and great seafood, but culturally, it’s just not as abundant and revered.  Luckily, there are some cultures in our melting pot community that do love their seafood, and so, at least, you can find some great places like Quality Seafood. 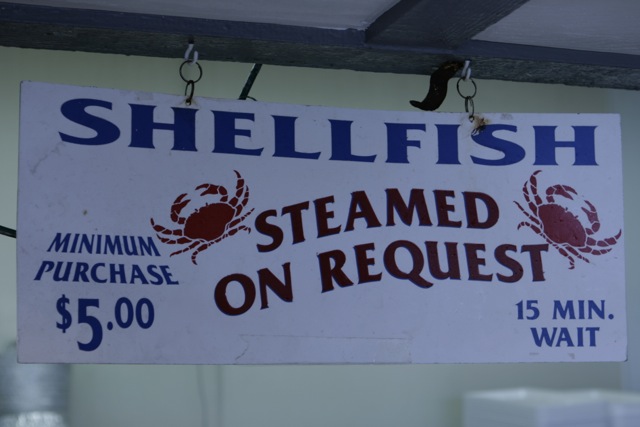 There’s an interesting energy at a seafood market/restaurant as people go about selecting their food to be taken home or prepared right there.

I decided to not waste this opportunity to make a pizza for lunch before the party.  I was just up in San Francisco and had an incredibly awesome spicy clam pizza at Pizzeria Delfina.  Why not kill two birds with one bag of clams?  As we sat having our morning coffee I talked my wife and daughter into joining me for a late morning trip to the pier.  Clams baby!  Clams!!

I got there around 10:30AM to find a relatively quiet scene at the fish market. It was before the lunch rush and, though open, the fish market was still in set-up mode.  Some people were already tearing their fresh steamed delights apart and washing it all down with a variety of beverages as the marine layer fought for control over the harbor. 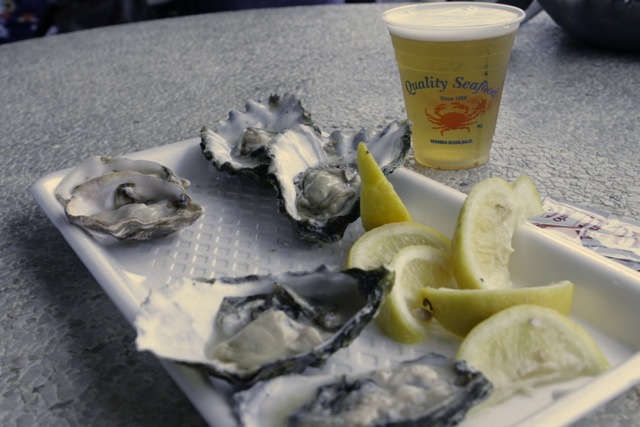 It took me a while to get served.  Quality Seafood does a good amount of business selling their food to go as well as taking it out of the fresh tanks and steaming it or preparing it right there for you.  I was only behind one gentleman, but he was ordering up a gargantuan feast of steamed shellfish and fresh sea urchin.  He walked down the line selecting clams and muscles to add to his plates and, since it was early, the other guys were all busy getting other things done.  No worries, I wasn’t in a hurry.  I took pictures and started eyeballing the oysters.  While waiting, I ordered up a half dozen oysters and a beer – it was now approaching 11 AM, why not?  It seemed fitting and would make for a better story, right? 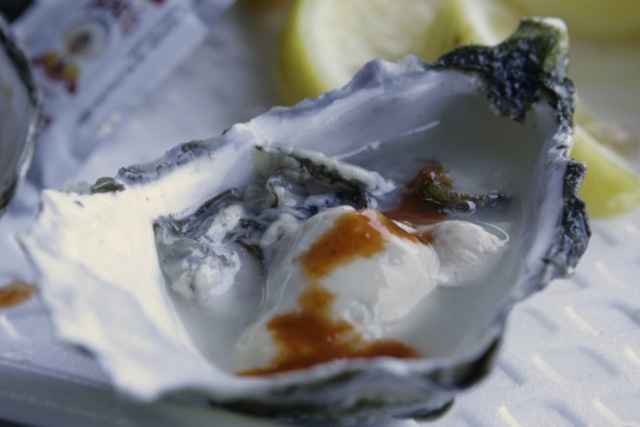 Don’t be jealous. There’s more. Besides, we’re here to make a pizza…keep reading!

I got my clams, enough for the party, and a pizza, and walked over to enjoy my oysters before we headed back.  My wife and daughter don’t eat that kind of seafood, so they were all mine and so we just sat and talked and enjoyed the morning.  The pier would soon grow crowded as the sun began to win the battle over the misty marine layer.  This time of year it’s hard to find a time when the crowds haven’t overrun our town, so it’s nice to have a moment like this in the summer.  It feels like home rather than a bustling tourist spot.

The oysters were fresh, cool, and with some Cholula Hot Sauce, and even a drizzle of beer over them — they tasted fantastic!  This was a great start to the day.

Off to make the pizza….

As I mentioned, I was up in San Francisco recently and made it to Pizzeria Delfina one night, where I had their Clam Pie.  They used cherrystone clams out of the shell, tomato sauce, oregano, a little pecorino Romano and hot peppers.  This was my inspiration for my claim pie.  It was a bright, spicy tomato pie with a delicious crust and the perfect amount of clams.  In a way, it’s a perfect Marinara pizza — a celebration of the sea. 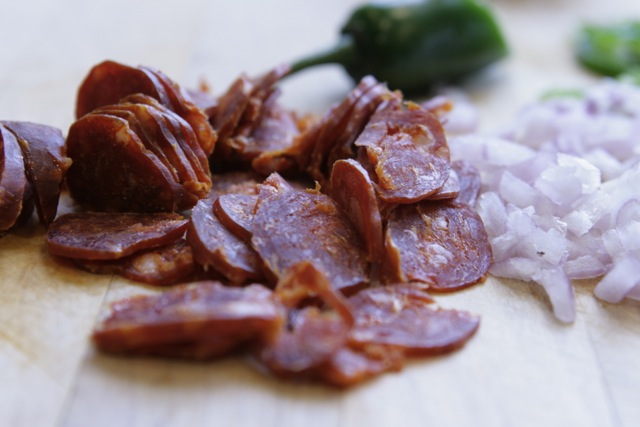 – Dough – Drunken Mesquite Dough *Edit: I checked my notes while posting a new recipe demo and realized that this pizza was actually made with my Brew in Germania Dough.  With any dough this pizza is a winner and I will be playing with this one for a while! 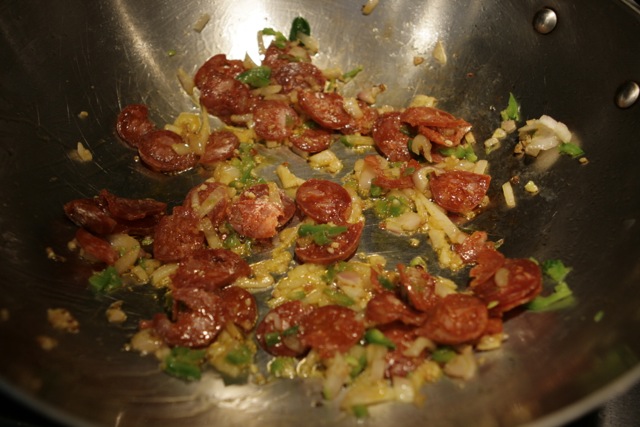 The garlic, onions, jalapeños and chorizo becoming one tasty sauce!

– Littleneck, or other suitable fresh clams

– Favorite beer (In this case, my keg was putting out a Firestone Double Barrel Ale) 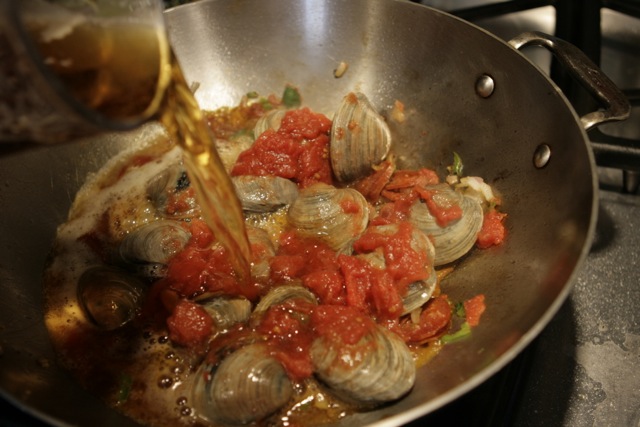 The finishing touches. A little more time and these babies will be popping open!

This is going to make the topping and the sauce for the pizza!  It’s pretty darn delish!

Saute the chopped garlic, onions and jalapeños until just soft — about 3 minutes.

Add in the sliced chorizo and continue to sauté for another few minutes.  You’ll see the ingredients all start to become one tasty looking base for the clams.

Add the clams (in the shell).

Pour in some beer.  *Note: I poured in enough to cover about 1/2 way up the clams.  Once we remove the clams, we’ll let this sauce continue to cook down to concentrate the flavors for the sauce. 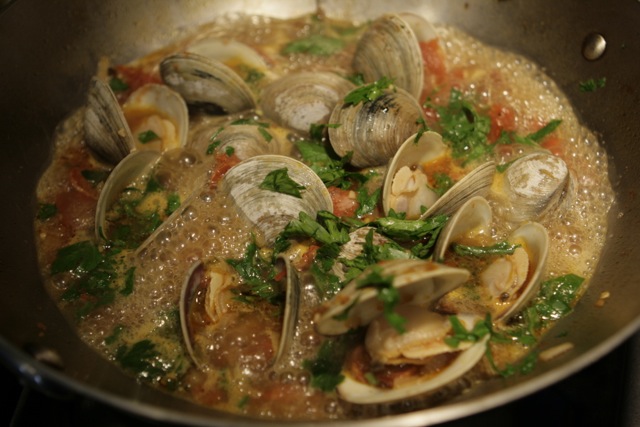 Time to pull the clams. Don’t overcook because they are heading back into the oven on board a pizza soon.

Once the liquid is boiling, cover the pot for about 5-6 minutes or until the clams open up.  Once this happens, add some more fresh chopped parsley and spoon the clams out into a separate bowl to cool.  Don’t overcook them, they are going into the oven as well!

Continue to boil the sauce with the lid off the pot.  You can use less beer to make this faster if you prefer.  The clams will steam with less.  You can also add more tomatoes to make a thicker sauce, but I was going for a combination of a pizza sauce and a clam sauce. 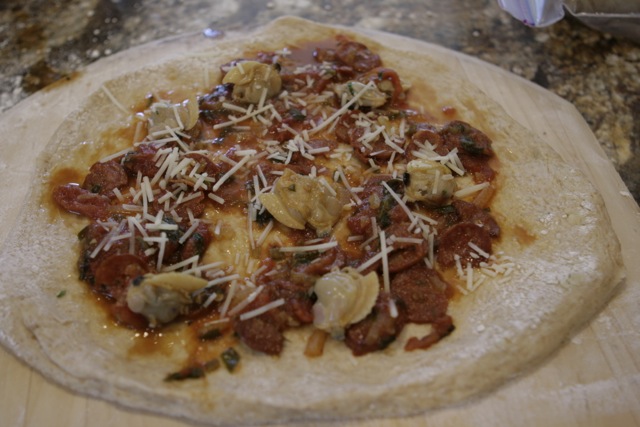 Spoon out some of your Clam/Beer/Chorizo/Jalapeno Sauce/topping onto the pizza dough.

Add your clams (pulled from their shells) onto the pizza

Sprinkle with a little Parmesan Cheese

Drizzle with a little EVO

Slide her into the oven! 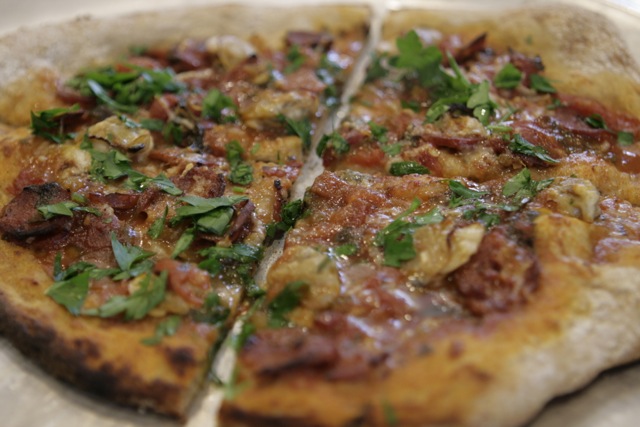 I drizzled a little more of the cool sauce over the top to finish this.

Drizzle with a little EVO and squeezed lemon juice and serve! 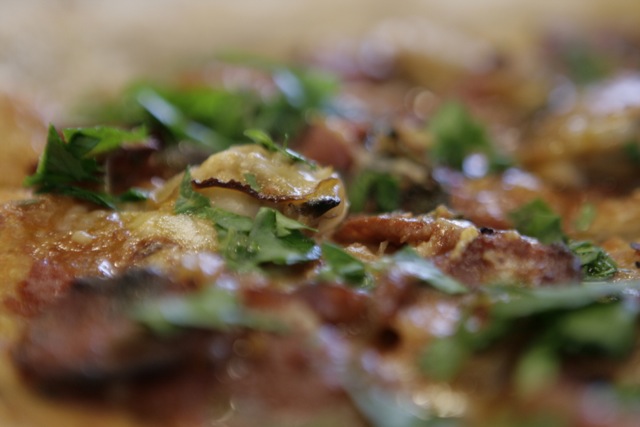 I love that the clam got a little char – even in my home oven!

It’s a nice day when you start it off with your wife and daughter (my son was sleeping at home) with a walk on the pier.  It’s nicer still when you have some fresh oysters and a light crisp beer while there.  And, it is even better when you come home and whip a pizza this good out of your home oven!

Let’s just think about this sauce.  You may say there’s some stuff going on here.  I was lucky to start with the best tomatoes you can find (Bianco Dinapoli), but we added purple onion, garlic, a relatively spicy, salty, cured spanish chorizo, jalapeño, beer and clams to it!  Let’s just say it was good! Notice I didn’t “season” the sauce.  No need.  There are flavors and seasoning coming from all angles here.

The tips/edges of the clams even charred, which was a nice textural note.  With a final drizzle of lemon this pizza rocked! 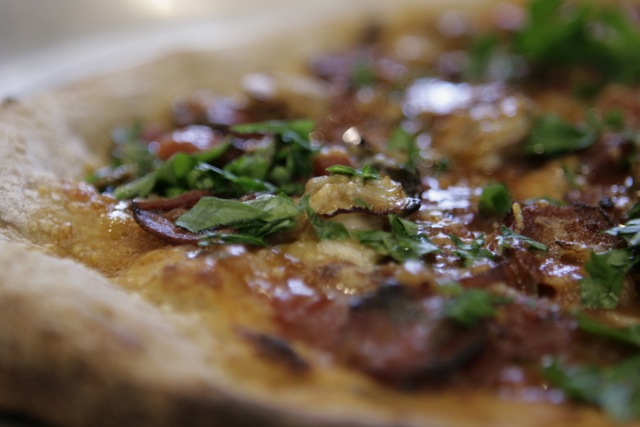 This sauce is all about flavor! I would add a few more clams normally, but I was hoarding them for the party.

I think I’ll call this the Redondo Marinara Pizza!

*I had a few clams left over and made a second pizza.  My son Owen and I devoured them.  My wife and daughter watched.

Enjoy…I took lots of pictures for this one!

The story was great & the pizza looks awesome! I’ve been wanting to make a clam pie but haven’t gotten around to making one yet. We have some local littleneck clams that would be perfect on a pizza. The are called Cedar Key “Sweets” & they have been used in clam chowder competitions in New England winning several awards. Clam Chowder…Mmmmm…I digress, but that would also be an excellent pizza. White sauce with bacon, potato, onions & clams.

Give it a shot and let us know how your’s comes out! I’ve made a few variations of pizzas with clams and always love the results. If you make up your version send us a note and some pictures. Maybe I’ll do that one next?!

A clam chowder pizza — wow, what a great idea!! I can’t wait to try that. Thanks Kenny!

I think that I’ll make good on my clam pie and document the results. I’m also working on the Clam Chowdah (as they say in the NE) Pizza.

Sounds great! Send us some pics and note, or even write up a piece about it. Email us at: info@pizzaquest.com.