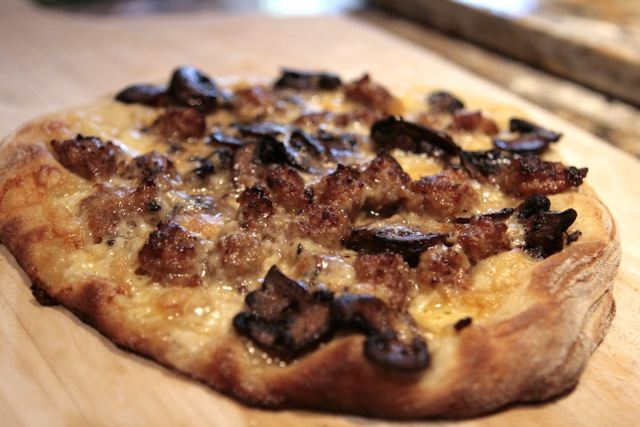 I was making a bunch of pizzas recently and taking lots of photos, so I went to the meat department where I shop to see if they happened to have any lamb sausage.  Yes, Jay Buonchristiani’s Lamb Sausage with Fennel Pizza was that good and I wanted to make it again (see the Instructional Section for the original posting on this).  And, I had another bottle of his Syrah hanging around, so I thought, why not try it again.  But, the butcher didn’t have any lamb sausage.  Since I was in a hurry, I thought I’d pick up some spicy pork sausage and give the pizza a try with that.  Jay’s recipe calls for any type of lamb sausage – but not spicy because of the wine he was pairing it with.

I was having some friends over and, because of the spices, I decided to open a different wine to use to make this pizza, as well as to drink with them – a 2008 Dover Canyon Barbarian from the Central Coast.  We had recently taken a family trip to Cambria, CA with our friends, the Dunhams, and they were coming over for dinner.  Kevin and Kristin are good friends with the owner of Dover Canyon, Dan Panico.  We were lucky enough to be able to tag along for a barbecue at the winery on one of the nights while we were up there. 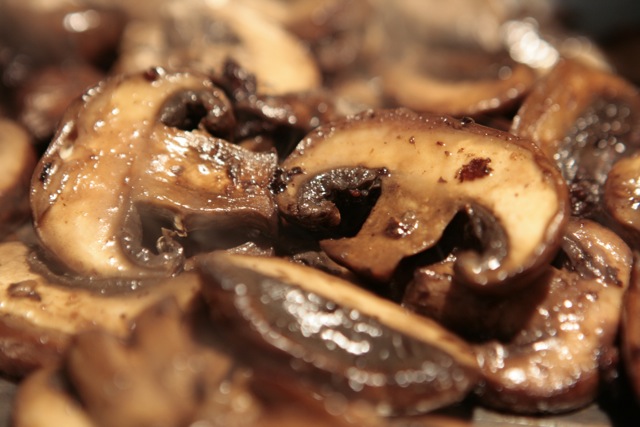 What a great time!  A number of people I know who have houses in Cambria had told me to visit Dover Canyon and were jealous when I told them we were not only going wine tasting, but also going over for a barbecue.  I’ve had their wines on numerous occasions while sitting by the Dunham’s pool snacking on cheeses and salted pork products.  You don’t often get go to a private barbecue at a winery, and almost never as a family guest, kids and all.  So, I thought it was a good idea to follow up and make this pizza with one of the delicious wines we bought that weekend. 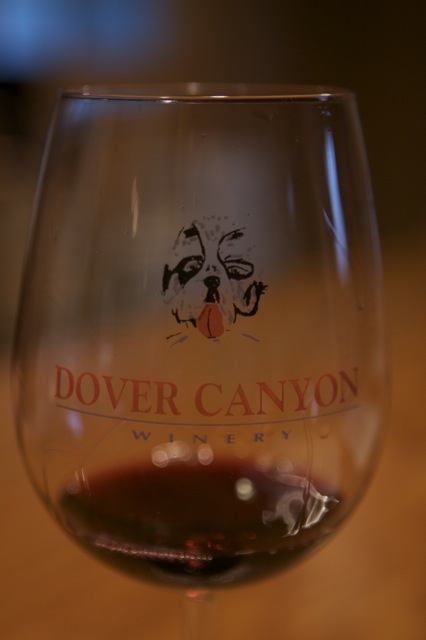 Dan and his fiance’ Glenda were gracious hosts at the winery.  When we showed up a little late, after getting out of LA traffic that Friday, we were immediately given glasses of wine and began to get acquainted.  The guys moved upstairs, above the tasting room for some pool, while the women did – something else.  Who knows?!  And, at the time, who cares!  They were busy, happy, and the kids were off running around outside, and we were drinking great wine with the winemaker and playing pool.  How do you beat that?

A little while later, we moved over to the house to start grilling.  The dinner consisted of some marinated lamb, mashed potatoes with root vegetables mixed in, grilled avocados stuffed with shrimp and mango salsa, a fresh farmers market salad, some great fresh bread, and lots of delicious wine.  We sat out on the covered back patio with a soft rain coming down and enjoyed a memorable candlelit meal.

And we even came back the next day to do some “official” wine tasting.

Dover Canyon is a small winery that sits on top of a beautiful rolling hilltop.  Dan and Glenda live in the older farm style house that overlooks it all.  If you ever visit the tasting room, you will surely be greeted by the big, gigantic, lovable “puppy” Saint Bernard named THUNDER! The logo is not actually of Thunder, but he is surely the official mascot now! 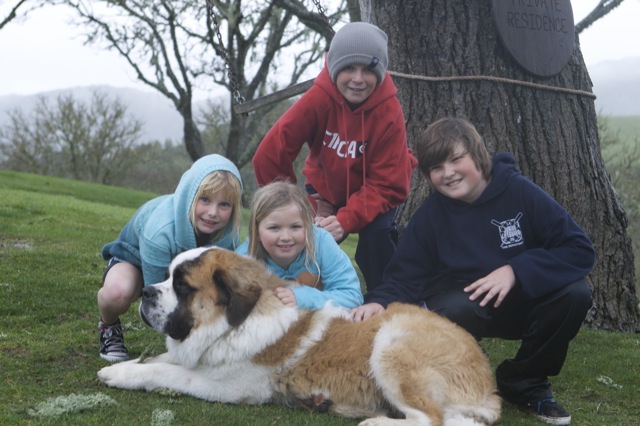 The kids (Owen and Dara English, Dash and Katy Dunham) had a ball running around the vineyard with Thunder.  It was raining most of the weekend, which gave them all a chance to get out and be real kids sloshing through the mud, wandering around the vineyard, walking through the swelling creek and generally doing exactly what they can’t do here at home in Redondo Beach, CA.

So, that’s how I got the wine but now, back home, making pizza, this one was created originally by Jay Buonchristiani, at his family’s winery in Napa. It may be wrong of me to introduce a version of his pizza so soon with another wine but, without the lamb sausage, I wanted to save my final bottle of Jay’s Syrah.  I feel like his pizza was created as a celebration of gathering and, since we did gather, and we did enjoy good company, I think the following pizza is an appropriate extension of Jay’s original recipe.  I thank him again.  And, I thank Dan Panico and Glenda for sharing their time and winery with us that weekend.

Now, to bring it all full circle, here is the pizza we then shared with the Dunhams after returning from our Dover Canyon winery adventure, inspired by my love of Jay Bunchristiani’s original version! 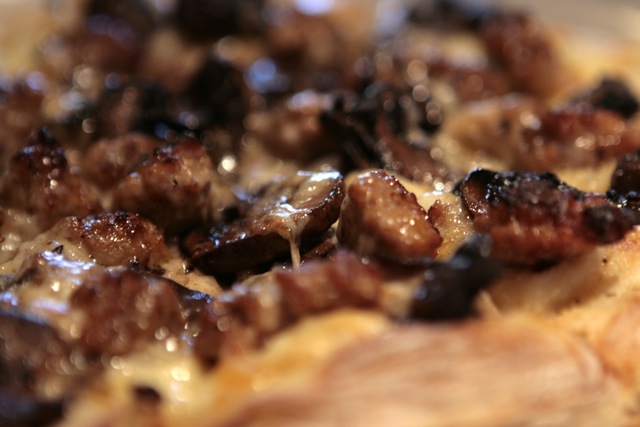 The Versatile Buonchristiani based Spicy Pork and Mushroom Pizza Recipe:

Remove the sausage from the casing (unless you bought a bulk sausage) and saute with a little garlic and olive oil.  Make sure not to fully cook the sausage, as it will continue to cook in the oven. Remove sausage and set it aside.

While the sausage cooked, I added a little dried Tarragon and Thyme to keep with the spirit of this recipe and since I didn’t have the fresh herbs on hand.  I omitted the Nutmeg.

Add the chopped mushrooms and saute in the wine and sausage bits until soft – remember they will continue to cook in the oven on the pizza.

Add the cooked mushrooms into the bowl with the sausage, and mix.

Spread your dough out to the desired size and shape

Add the Provolone, Fontina and Brie Cheeses directly to the dough

Transfer the pizza to your preheated oven and baking stone (as hot as you can get it).

Note: Needless to say, this is a great beer pizza also!

Now, I must build a pizza oven in my backyard. Finally, a place to connect with other “Pizza Lovers.”