I was talking to Peter the other day and, since I was going to make some pizzas, I asked if he had any ingredient ideas he might throw out for me to play with.  He said “Cauliflower”!  I really do like cauliflower, but to be honest, it’s one of those things that still has my childhood memories of flavorless, steamed cauliflower ingrained in how I perceive it.  It’s an ever-present connection.  But, as an adult, I really do like it.  I love it when it’s done right.  You can really create some depths of flavor by charring it up on a grill, or in the wood fired oven or searing it in a screaming pan with some oil.  That makes all the difference in the world! 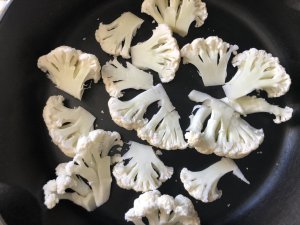 Ok, back to Peter’s suggestion!  He said he’d send me some notes about a test bake he’s doing for his new book on Detroit Style pizzas.  I’ve had a little fun playing with his Detroit Pizza Dough Recipe as a tester.  Can’t wait for the book!   I love this about Peter.  You get him on a topic and there’s always a story!  He calls his new thick-crusted, Detroit Style pie the “Kundalini Cauliflower Pizza.” (Note: Peter also wanted me to tell you that the book won’t be out for a year –late spring 2019 — as he’s still writing it, but that as it gets closer to publication, he will run some snippets from it here on Pizza Quest). 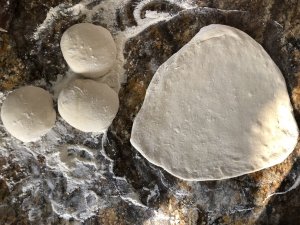 Well, he had me at cauliflower when he also said, “Garlic.”  I won’t go into his recipe, but it does have a lot of cauliflower and garlic and looks amazing.  For my wood fired cauliflower version, which is very different from his, I thought I would incorporate the cauliflower, both as part of the sauce, and also as part of the topping.  I headed over to my local little Italian market/deli called Giulian’s, in Hermosa Beach, to pick up some ingredients.  I decided to go with a nice Fontina cheese, and picked up some beautiful hot soppressata to finish this off. 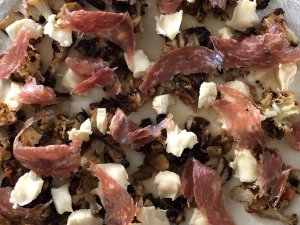 -Cut the cauliflower apart, into individual florets, and then slice each floret into smaller pieces about 1/8″ thick.

-Peel, smash, and chop the garlic.

– Salt and Pepper to your taste.  I always freshly grind my pepper for such things. 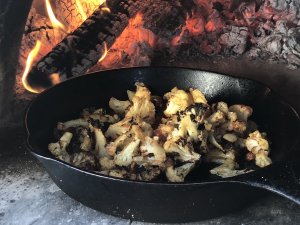 This is a wood fired pizza, so we’re going into a hot hot wood fired oven with the cauliflower and garlic goodness!  Let it char.  Toss it around and be careful to try to keep as many of the sliced florets intact. There will be a lot of smaller broken pieces which is fine also.  In a regular oven, you could start on broil and get a good char going on the cauliflower and then turn it to bake and let things soften up.  Or, you could even pan fry it on the stovetop and then turn it down and put the lid on to soften.  The smaller parts will soften quicker and I wanted to keep the larger pieces a little more al dente!  With the charred edges, this worked out nicely.

When finished set the pan aside to cool, for later use on your pizza. 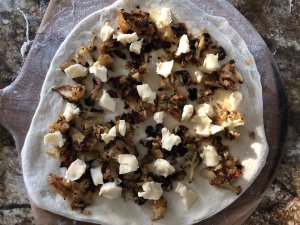 Scoop the cauliflower mixture and spread around the dough.  Scoop up some of the small broken bits and larger bits.

Tear the Fontina cheese into pieces and layer it around the cauliflower.

Tear the thinly sliced soppressata into pieces and place them all around the pizza to finish.

Into the oven we go!

In the wood fired oven, at about 750-800 degrees, this thing is coming out in about 90 seconds.  We’re just baking the dough, melting the cheese and hoping the soppressata was nice and thin enough and has some crispy edges.   Dome it for good measure and out she comes.

Once out of the oven, I finished it with just a little splash of white wine vinegar to give it a little zing.  Some chili oil may also be a nice touch as well, but I felt like the Hot Soppressata handled that end of the spectrum.

The Fontina melted and filled all the gaps in and around the cauliflower.  The roasted cauliflower and garlic were really nice acting as a sauce and a topping at the same time.  And, if you have ever read one of my recipes, I don’t have to say anything more about the soppressata. 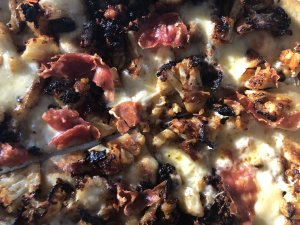 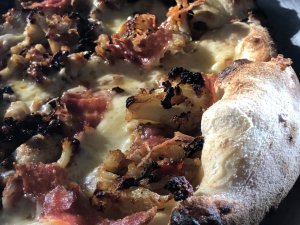