The scene of my first Bo Ssam Pork feast! It unfortunately set the bar very high! Such a fun night. Such great food!

This is my first belated post in this calendar year we’ve now entered. 2014!  It can be a wonderful thing to start into a new year.  There are all of our hopes and dreams before us. Yet it’s also bittersweet because we are leaving behind yet another moment of our lives, or a measure of time. Time seems to move faster and faster as we get older.  Ever since my wife and I had children things have really seemed to speed up.  I feel like Snake Plissken in Escape from New York sometimes. It’s as if I’m being forced to watch a giant red digital timer on my wrist counting off each second, each minute of my life!  Tick tock, tick tock…

When we’re younger we think our life clock is counting forward.  Life is ahead of us.  A big realization for my wife and I came when our second child came along.   Upon closer inspection, we realized this giant obnoxious wrist timer was actually tick-tocking backwards!  The thing was counting down not forward! We realized these kids, even this newest little baby, were working their way out the door to leave us.  This changed things!  Our baby, our daughter was now looked at with a little more suspicion!  She actually wants to leave us because she thinks her clock is ticking forward.

That’s the cycle of life I suppose.  We all go through it, experiencing time differently throughout our lives.  We seem to be always trying to get somewhere or too something and then at some point when things change, or come to an end we wish we had not rushed through them. Perhaps it’s impossible to not do that ultimately, but because these measured moments in time come and then go, I try to remember to focus on not only being where I am at that moment, but also at least as much as where I’ve been and where I’m going. 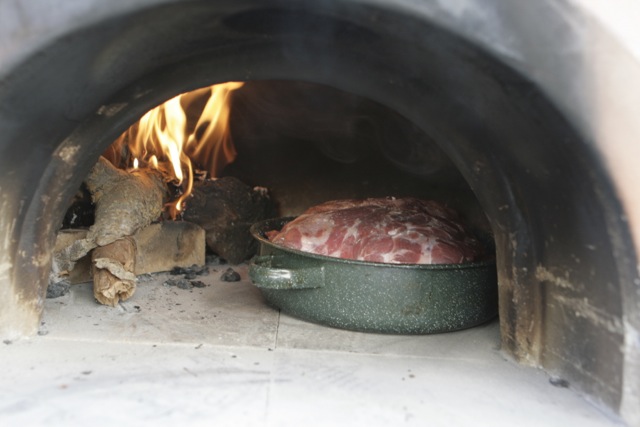 My twist on this great recipe was to take it to the fire! It was risky, but it paid off.

Where does my Wood Fired Bo Ssam Pork fit into this?  It’s funny how that works.  I couldn’t possibly have pre-planned this introduction to my latest attempt at “perfecting” David Chang’s Bo Ssam pork.  I just woke up early this morning after a busy holiday and the beginning of another new January and made myself a cup of coffee and sat down to write.  I realized what this meal meant to me as I looked at the photos and thought about our friends Kurt, Kim, Ryan and Mitchell that we shared this feast with.  It was a moment in time we shared with good friends and our families that was now gone. 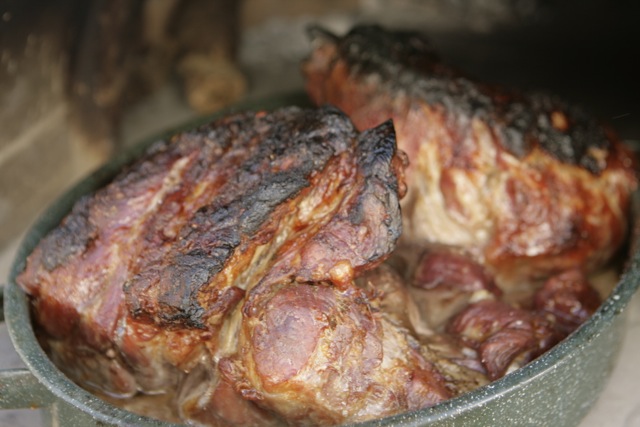 To my mind, the best meals aren’t the ones made by a master chef, or the best cooks in the best restaurants — though they can be.  Great meals are the ones that become memorable because they were part of a moment in time where you shared it all with a connection with your family or friends. It’s about good food for sure, but it’s also about the people and even the place.  It’s the overall experience that makes food and meals memorable.  The first time I made David Chang’s version of Bo Ssam pork was one of those perfect nights with good friends, good food, and some good beer that combined became a memorable stamp in time!  Perhaps a miracle?!   I’ve had quite a few of these moments around David Chang’s cooking.  While in NY on various trips, I’ve been lucky enough to find myself sitting in Momofuku Noodle Bar, or the Ssam Bar with friends and being blown away by how simple and good the food was.

I am not going to go deep into the recipe here because you can find it online, or in one of David Chang’s books – which if you buy it at one of his restaurants comes signed, which I think is a nice touch!  Here is a link to a New York Times article called “The Bo Ssam Miracle”.  The recipe is simple – it just takes some time in the oven. 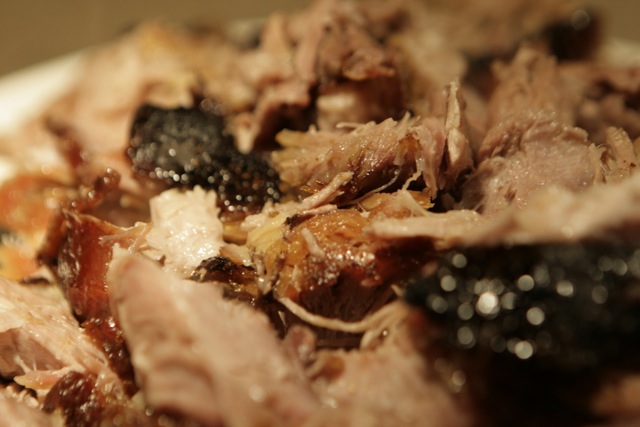 For this attempt at finding this “miracle”,  I decided I would try to cook the pork in my Primavera – Wood Fired Oven.  The original recipe calls for 6 hours in the oven at 300 degrees.  As I learn to take create different meals in my Primavera, I figured this 6 hour roast would be perfect to take this long road trip with my oven and work to keep it at a relatively low temperature for a long time.  I fired the oven with a small fire and let it go for about an hour.  At that point the oven was getting pretty hot, but I figured it was still absorbing heat and once I cut it down, I wanted enough residual heat stored in the walls to keep the process going for the duration.  After the temps were approaching pizza temps, getting up to over 700 degrees in the dome, I put the door on to kill the fire and see where the ambient temperature was.  I then pulled a lot of the coals out to allow it to cool down a bit more.  I tinkered with it for about another hour or so while going back and forth and getting the pork ready in the pan.

As you see, I had a lot of pork in that pan!  It was about 14 pounds and just barely fit. 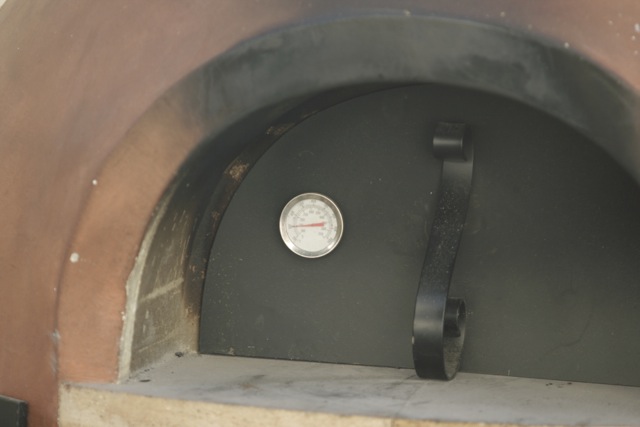 With the door closed the temperature gauge on the door read exactly 300 degrees which is right where the recipe calls for it to be in a regular oven.  I added a small piece of wood to the coals and got it to catch fire.  Since I was using the WFO I figured I may as well let it do what it does — adding some fire and smoke to the process.  In went the pork.  After about 15 minutes I closed the door to extinguish the fire and create some smoke.

After an hour I checked the roast and turned it.  I then left for my daughter’s soccer game!  My pork was important, but well, you know how I said the whole family and friend thing is at least equally important with time and life ticking away — so, off to soccer!  Besides, the oven was doing all the work, I would just be pacing back and forth trying to look busy. 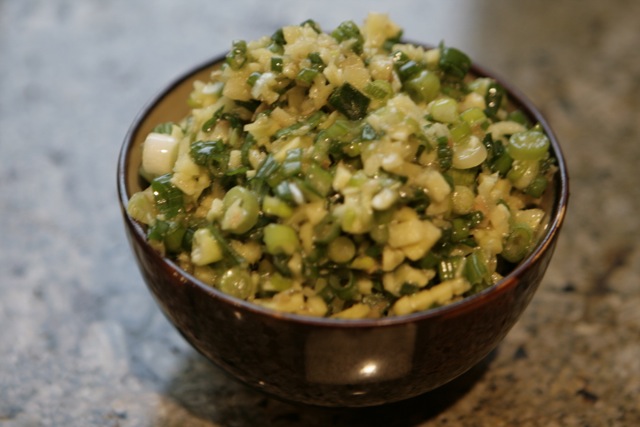 Chang’s Ginger-Scallion Sauce. I think this sauce is reason enough to build a meal around it.

I came back almost 2 hours later and rotated the pork again and basted it.  The temp was still holding and it hadn’t burnt to a crisp!  I let this baby run the full 6 hours since the temp was ever so slowly falling from 300.  At the 6 hour mark, I pulled it and covered with foil.  Since we were having dinner at our friend’s house, we wrapped the package and hit the road.

Luckily we live in an area with great Korean and Asian markets!  Kim did the shopping for the sides and ingredients for the Bo Ssam Sauces while I attempted to coax the Primavera into delivering the perfect roasted Bo Ssam Pork ever made…again!

When we got there with our package we made the Ginger Scallion Sauce and the Ssam Sauce as well as a spicy brewed fish sauce with Thai chillies.  Kim picked up some great stuff at the market for sides: kimchee, seaweed salad and a few other Korean side dishes like a Seasoned Omasum (tripe) and some other spicy pickled veggies as well. 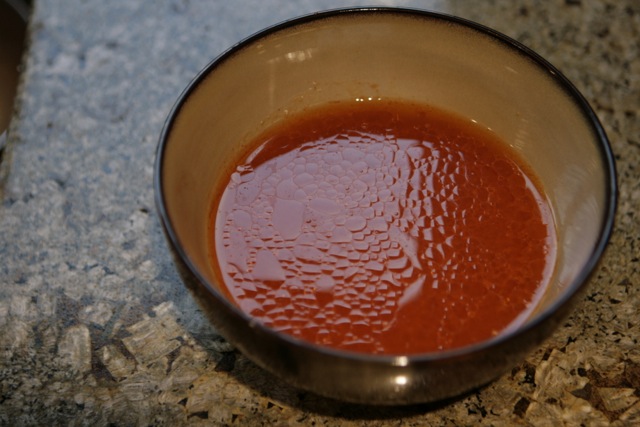 The Ssam Sauce is spicy, but has an earthy depth to it.

The pork was finished in Kim’s home oven where we caramelized the brown sugar and salt mixture on it and then pulled the pork apart and plated it and the feast began!  The thing I love about this meal besides the juicy salty-sweet pulled pork and the tangy pickled kimchee and side dishes and the warm rice in the cool lettuce that cups and the insane spicy and earthy sauces is that it is a meal that is meant to eat in a free for all style!  It’s a family style meal.  It’s a shared meal.  It’s a working meal – with everyone talking and passing plates and ingredients and eating with their hands and laughing and drinking and just having a good time with each other and with their food!  I’d call that a miracle for sure.

We sat and began eating and continued drinking some wine and beer and after a short period the smells and our laughter began to draw the kids from their various activities around the house.  As I sat there, I couldn’t help but smile as I realized we were having another one of those moments…a moment that would remain with us, but was quickly going to pass into time. 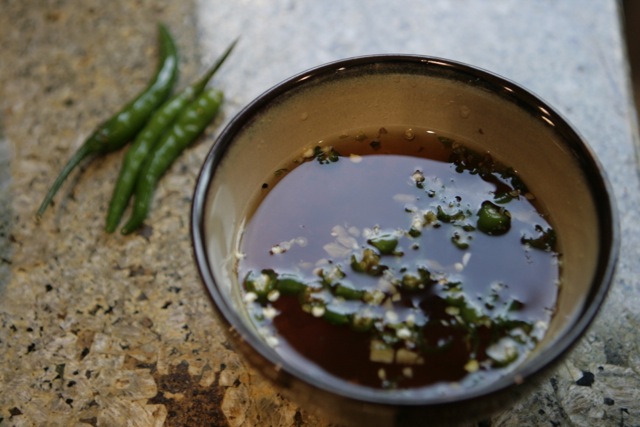 This stuff is the bomb! This is one of our additions to this meal. Our friend Kim doesn’t offer rice at her house without this standing by!

In a saucepan over medium heat add equal parts Fish Sauce, Water, Vinegar and Sugar.  Add some chopped garlic and chopped Thai Chillies and stir until sugar melts.  Be careful not to let it boil over!

Serve at room temperature.  May be stored in a covered jar in the fridge for a couple of weeks. 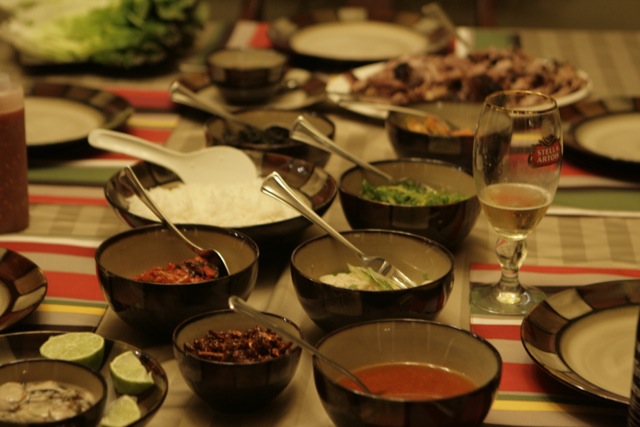 *Note:  For those cooking in a Wood Fired Oven, I suggest using a remote thermometer for this.  I think I got comfortable because my temperature gauge was exactly 300 degrees for hours.  With my diversion to a soccer game and the temp being right on the money, I let this ride.  The top of the pork was a little dry (not ruined), but the middle, sides and bottom were perfectly juicy.  That is part of the fun cooking with a wood oven, or over a fire on a grill.  Isn’t it?!!  You have an added challenge which requires experience, skill, and the use of your instinct a little more than punching the keys BAKE – 3 – 0 – 0 – START.  Love it!

I hope you all try this amazing recipe.  I realize that though I’ve eaten at several of David Chang’s restaurants numerous times, I have not had a chance to try his own version of this!  I can’t wait. It’s now on my official list of things to do.  We’ll see how he does compared to us!  Haha

In the meantime though…it’s only a matter of time before I fire up the oven again and gather some friends.

The next miracle is waiting!

*I keep meaning to make this recipe and save some of it to make a pizza with.  Once again, I have failed in my attempt to keep anything left over.  I guess we’ll have to try it again!