What is it that makes a great pizza? 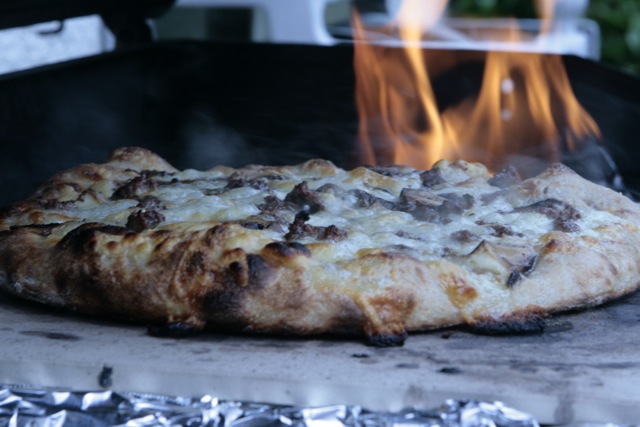 One of my attempts at making a pizza on my gas grill trying to bring some fire and smoke into the equation.

I’ve been on a personal quest searching for the answers to this question for some time.  I’ve traveled and eaten more than my share of pizza.  I’ve also spent many hours slinging my own pies in and out of my home oven in all in an attempt to further understand and expand this quest.  I’d say I’ve even gotten pretty good at it!  I’ve made some of the best pizzas I’ve ever had right here in my electric oven baking pies at 550 degrees. At least you’ll have to trust me on that because the pictures look like they are good tasting pies!

Every once in a while I end up being “wowed!”  When that happens, it usually means I’m sitting in a pizzeria with a wood fired oven.  There is something different that the intense heat, fire and smoke bring to a pizza.  My crust is getting better all the time.  I get good puff, some bubbles, and I even manage to get some decent char in my home oven.  But, it’s not the same as when Tony Gemignani, Kelly Whitaker, or so many other amazing pizza makers pull a piping hot pie out of their oven.

So, one can wish. One can ponder.  One might even go as far as I have and try to build a wood burning gas grill oven out of my existing grill! 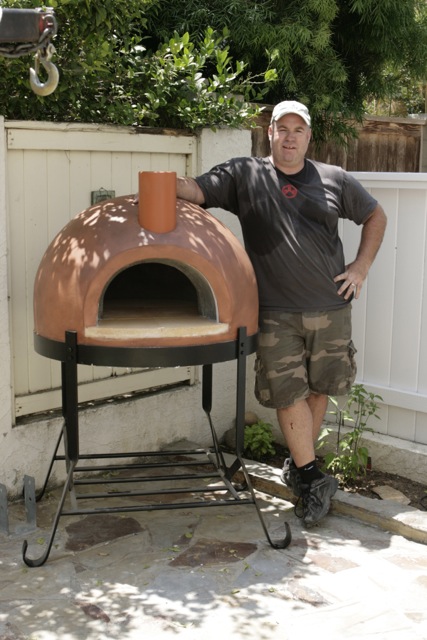 Check out the gallery, you’ll see the engine lift I rented and heavy duty straps to lift this little monster onto the stand. It would be easy to do again, but the first time it was a little scary!

I am happy and sad that a new chapter has begun in that journey.  Wood and fire and oven has come to the English household!  I’m happy because I’ve wanted one for so long!  I’m sad because now I have no excuses in my quest to be the one to make that perfect pizza!

Yes, I got a new tool, or toy to play with.  A rather large crate came to my door a couple of weeks ago.  It had the words “Forno Bravo Primavera 60” stenciled on the side!  It took some doing, which I’ll probably chronicle in the forum, but I can report that it is indeed now up and running!

I was champing at the bit, or chomping.  I champed and chomped as a few loyal and brave friends came over to help me set this oven on it’s stand. Let’s get this baby set up, fire it up, and make some pizza!  Well, maybe not so fast.  I have made some pretty amazing pizzas in my home oven.  I figured I could now just slide my pizzas into the Primavera and out would come my best pizzas ever.

Well, yes and no.

First I had to learn patience.  It takes 5 days of building “low” temperature fires to finish curing the oven.  As I began the process I remembered filming with Chef Jensen Lorenzen at The Cass House Inn in Cayucos, CA.  Jensen and Peter were talking about his new oven that Jensen and his wife had recently installed.  I remember Peter saying to him, 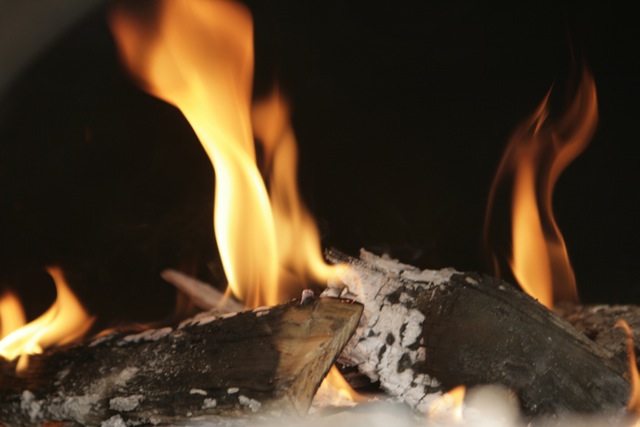 One of my curing fires. This took quite a bit of work and patience to try to maintain these lower temp fires. At the same time, it was a nice way to learn how the fire behaved in this oven.

“Over time, you’ll figure out how to drive this thing.”  As they talked further he discussed how each oven cooks differently and, as it cures and ages, it will continue to evolve in its performance.  I always thought that was interesting.  I recall how much respect he seemed to have for the oven as a sort of participant in the pizza making process — like it was an ingredient rather than a tool.  It was similar to so many conversations I have heard over the years when a winemaker talks about coaxing the full flavor potential from the land and elements out of their grapes.  It’s not just having a good grape, but how and where it’s grown.  What soil is helping to feed the vines and how the weather and climate conditions stress the grapes, which creates a better grape.   In both instances, the artisans learn to work with the elemental factors to coax “perfection” into their finished product. 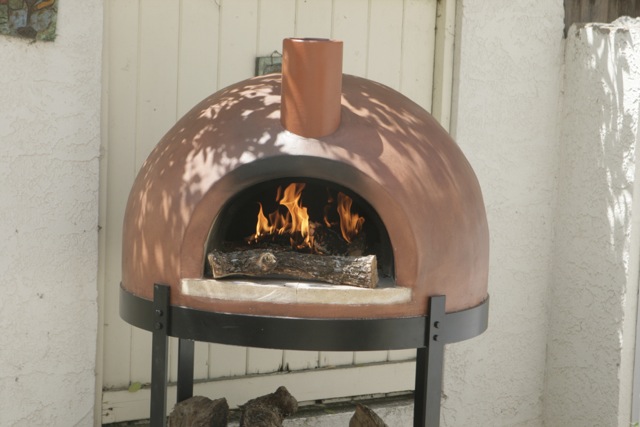 Cooking with fire is definitely a challenge.  Fire is not just heat, it is alive and moving and unpredictable.  It breathes air and exhales smoke and heat.  There is something primal about cooking with fire.  It’s never the same – you are always involved and adjusting things when cooking with open fire.  A home oven is a highly controlled heat box.  There are variations in how things cook, how each oven cooks, but in general the home oven is a relatively predictable platform to cook with.  You set the exact temperature and it hits it.  Try building a 300 degree curing fire and keep it in that range for 8 hours!  Now, that’s a dance! 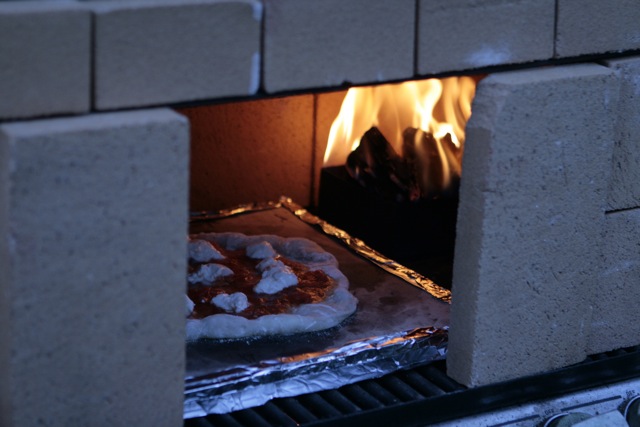 Another attempted version of my Gas Grill Wood Fired Oven!

I have always been driven to cook with fire.  I think it’s about being interactive with the food I’m cooking.  I have a gas grill, which is the easiest application of that desire and also somewhat predictable, but I also pull out my Weber Smokey Mountain cooker to patiently smoke my ribs, fish or other things that need that kind of slow time and attention.  When I want to cook a perfect piece of fish I pass up my oven and gas grill and use the bottom half of my Weber smoker to fire up some lump charcoal and, with added wood chips, try to dance a little with flames and smoke to bring that piece of fish as close to perfection as possible.  I think there’s no better way to cook fish!  We’ll see how the WFO does!

Hey, I have a Wood Fired Oven, baby!

After 5 days of firing for about 8 hours, at low and rising temperatures each day, I was now ready to take this oven out on the open road.  It’s like breaking in a new engine — you have to drive it slowly for some time before letting it open up.  In this case, it’s just to get the water out of the mortar and make sure that it doesn’t blow up on you from intense heat creating expanding steam pressure within the structure. 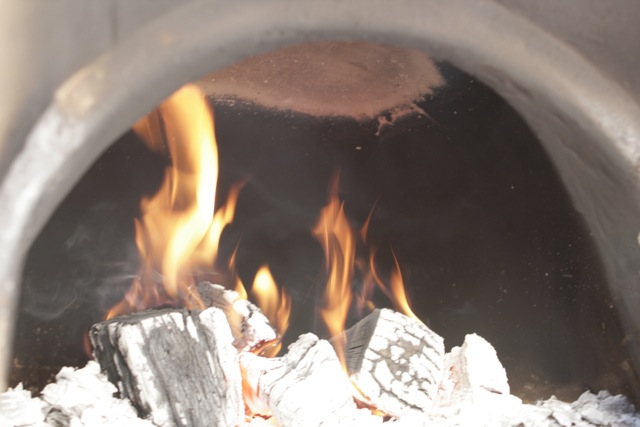 There it is! I had let things go. I added more wood. I let the fire grow. I wandered over at one point and looked up in the dome. There she blows!

It was time!  Today, more wood; more fire!  The temps were rising!  There’s a point at around 800 degrees F. when the black carbon from the fire burns off the inside of the dome.  That’s one way to know when you are finally pizza hot.  I’m only a few weeks into driving this oven, but let me tell you it was quest-worthy just seeing that!  I knew it was supposed to happen.  I was looking for it to happen, but when it did, I had a lump in my throat.  I was officially speeding down the highway!

OMG I have a pizza oven right here in my backyard!

I’m going to cut this “I got a Primavera 60” chronicle off here and call this Part I.  I will continue to tell the next part of my story as I figure out how to control this baby! Many of you reading here already have a wood fired oven and can probably relate and hopefully look back with pride and remember how you felt your first time.  For those of you who haven’t I hope my journey continues to motivate you to pursue and push your own quests forward. 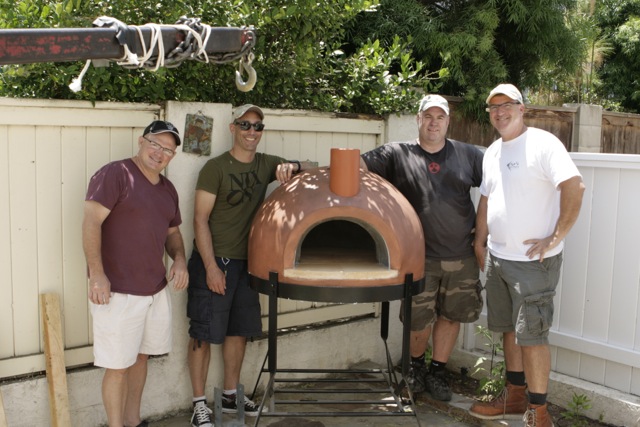 Thanks guys! From left to right: Erick, Sean, Brad and Kurt

Thanks to a few of my brave buddies who came over to help me install this thing.  I had a plan and they followed me — though skeptical at times, we continued our march forward.  Nobody was injured and no backs were hurt during the process!  A few weeks in, they still haven’t made it back to try some of my initial test drives!

Stay tuned for some more to come as I venture into this new arena.  I can tell you now that an already difficult task of making pizza and simultaneously taking pictures will now be even more difficult!  I may have to innovate!

I do remember you wrote Marc. I am just learning this oven, but from what I hear and certainly what I’ve experienced so far, I don’t think I have to worry about loosing any heat. This thing is way more efficient than I thought. I was worried I was going to have to be on a constant hunt for firewood, but to my amazement, to fire this up to pizza temps and cook for a while doesn’t take much wood at all.

The Primavera 60 is good for 1 pizza at a time. I debated about the need to make 2 at a time, but when you think about it, the pizzas bake in about 90 – 120 seconds! I couldn’t keep up with that if I tried!

There is plenty of room – as you’ll see from my photos as we go forward between the wood and the pizza. The floor is 24″ wide. I figure when the fire is pushed over to the side that takes up maybe 5-6″ which leaves 18-19″ for the pizza. For a 10″ pie, you’ve got 8-9″ to spare? Something like that.

I was thinking about getting the Primavera 70″ which has a little more real estate and that would be great, but so far, I am happy as a clam. Maybe I’ll do a clam pizza this week!

Don’t get me wrong, I am very jealous of everyone on the Forno Bravo Forum with a larger oven! I have WFO envy! I’d love to build one of their ovens from scratch some day. However, for the space I have in my “yard” here in Southern California, I’m really happy with the Primavera!