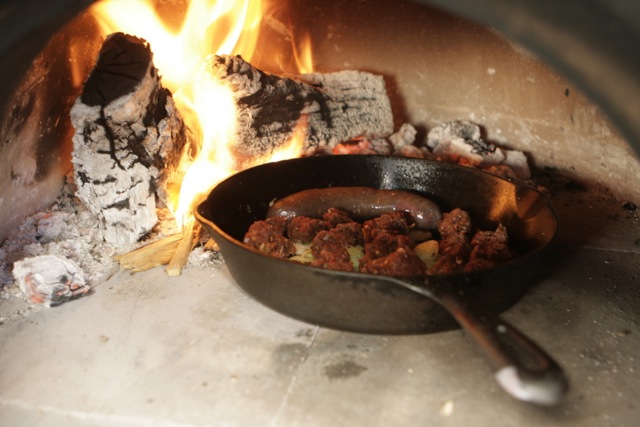 Some of the sausage is for the pizza, and some is just for some good eating!

My father-in-law is a hunter and I’m lucky enough that on our last trip up to his place for Thanksgiving he sent me home with some “fresh” Spicy Italian Venison Sausage he and a friend made up after a recently successful hunt.

When I got home I started thinking about how to use some of the sausage to make some pizza. I wanted to make something that sort of celebrated where the venison came from.  When an animal is hunted by you, or someone you know, I guess there’s just more of a connection to it.  I remembered an old Anthony Bourdain episode of “No Reservations” where he visits London and Endinburgh.  In the show, he joins the famous Michelin 3 Star Chef, Marco Pierre White, who takes him on a hunt prior to landing at his latest restaurant called the Yew Tree Inn, where they eat and drink and pontificate about food and life together. 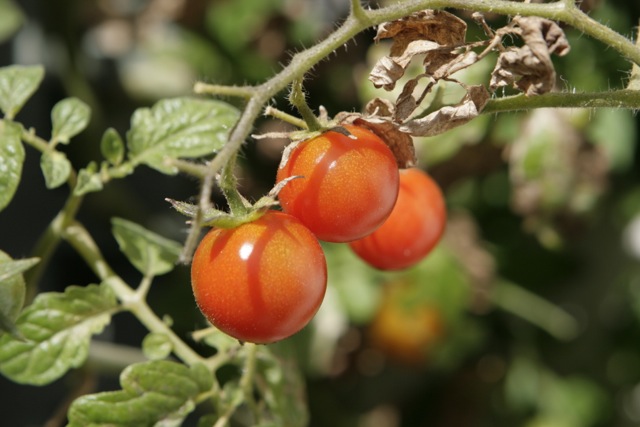 There’s a beautiful moment (as Bourdain so often captures) when he and Marco are walking along a grass covered two track dirt road on their morning hunt in the English countryside.  Bourdain asks him how often he does “this”.  Marco thinks for a second reflecting on his lifestyle and says “About 4-5 days a week. It allows me to clear my head.”  He talks about how this connects him to his childhood when life was simpler and he would spend time fishing and hunting.

As they walk the road Marco says something that stuck with me.  I had to go back and rewatch the episode to capture the entire quote.  He says:

“I don’t know how many times I saw wood pigeons eating the elderberries here. And I thought, lets roast a pigeon with elderberries.  It’s delicious. I love wild apples.  And, how many times do you see pheasants picking at them when they’ve dropped on the ground?  It’s like shooting a rabbit and then baking it in the hay. It works.  It really works.  What does a rabbit love to eat?  Hay.  Mother nature tells us everything.  We’re not the geniuses are we?  We’re just the technicians.” 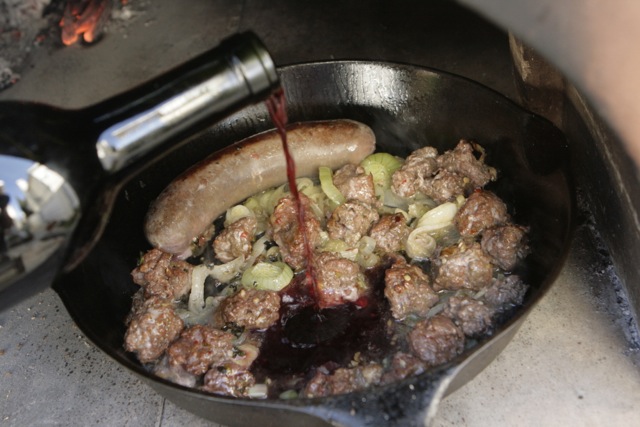 And, talking about local ingredients…this wine was made by a friend of my father-in-law. He is a serious hobbyist who plans to open a winery in a couple of years when he retires!

Anthony has an “Ah-ha!” moment.  It makes sense!  It’s what all good cooking is about.  It’s about using the available fresh ingredients that are right there wherever you are.  It’s about connecting the food, our environment and our lives.  It’s really about quality of life.  You only see it in a very brief quickly cut shot, but you see Bourdain’s almost childlike smile.  It’s a smile that says I know this, but you just taught it to me again!

Another hour or so has passed as I re-watched the episode.  Anthony Bourdain has done it again.  He’s inspired me.  His passion to search and explore the world through food is what originally gave me the idea to reach out to Peter Reinhart in the first place and why you are reading this recipe post!

For my Venison sausage pizza, I tried to bring some ingredients together that were similar to some of those that the deer may have once eaten.  I wasn’t able to to go to the location and investigate it, but tried to think about what deer eat in various locations here in the Western US.  I chose my Desert Dough because it was rustic and celebrates the western deserts where this deer came from.  I chose to add some sage, pine nuts and berries to represent what the deer may have eaten.

There are some wonderful flavors coming together in this pizza.  It was balanced with flavors ranging from earthy to sweet to spicy.  The song they created makes sense. 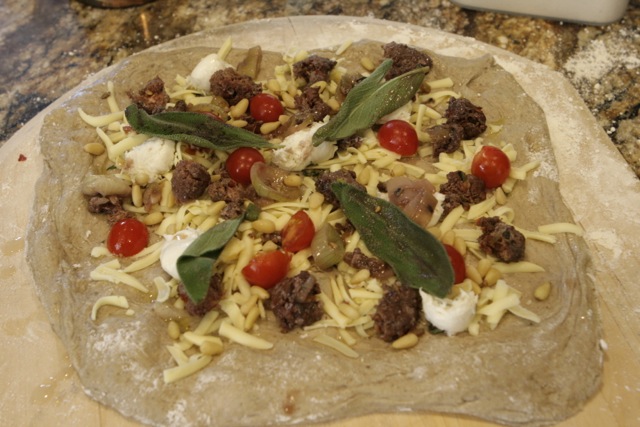 I forgot to add the cranberries to this first pizza. I added them on the second and it’s worth it. Alternatively, I think it would be interesting to add them while sautéing the sausage.

Alternately you could use Peter’s Rustic Dough *Link

– Cherry Tomatoes sliced in half

– Dried Cranberries *Because this is what I could find!  They work nicely!

– Chili Oil if you so desire as a finishing touch 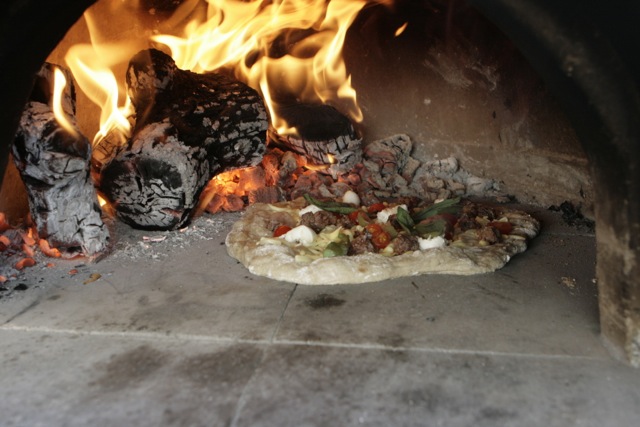 Fired with some California Oak and some Apple wood.

Pull the sausage out of it’s casing and pinch it off in pieces that are thick enough to not dry out, but thin enough to cook and eat on the pizza.

Slice up the Spring Onion

Add the garlic, onions, chopped sage, fresh thyme to the pan and slide into the fire.

Saute for a few minutes to start softening the onions and blending the flavors.

Pull the pan out and add the sausage.  After the sausage starts to brown, add some red wine to the pan.  The red wine will deglaze some of the charred bits and create a “sauce” depending on how much you use.  I wanted to also make sure my sausage didn’t dry out.

Slide it back into the oven and sauté sausage to “almost done”.  You will want to make sure there’s room for this to finish on the pizza.  Venison can get dried out.  The sausage should contain some pork fat to help keep it moist, but I still say leave some room for this to cook on the pizza.

Remove and set aside. 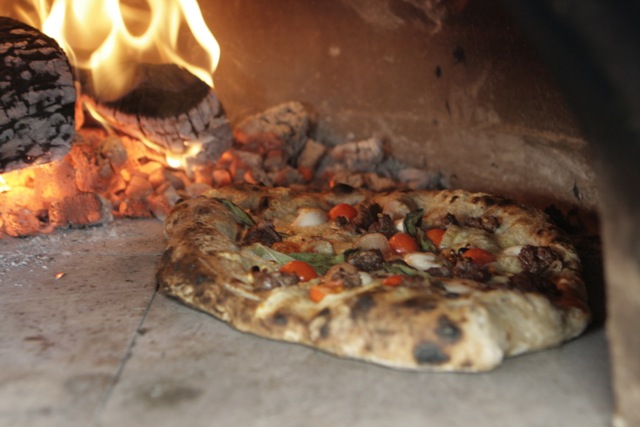 Maybe it’s just me, but I like my pizzas distinctly not round. This one got some nice color and char!

Drizzle with a little olive oil.  Sprinkle some herbs that go well with venison like: dried thyme and a little rosemary and I added some oregano as well.

Spread some grated gouda cheese and add a few pinches of the fresh mozzarella to blend with it which will also serve to smooth the gouda out as it melts.

Lay the venison sausage around the pizza and drizzle some of the sauce with the onions/garlic over the top.

Sprinkle on some pine nuts around the pizza. 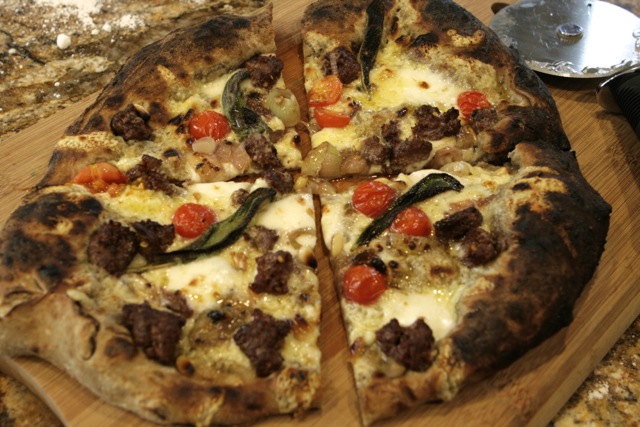 Looks good! I forgot the cranberries on this one!

Finish with 4 of the fresh sage leaves after soaking them in the sausage “sauce” and then sprinkle on a “few” dried cranberries.  *I forgot the cranberries in the first pizza, but you can see photos of them in the 2nd.  The cranberries add a nice sweet note that goes well with the more earthy venison and the slight spicy notes from the sausage mixture. 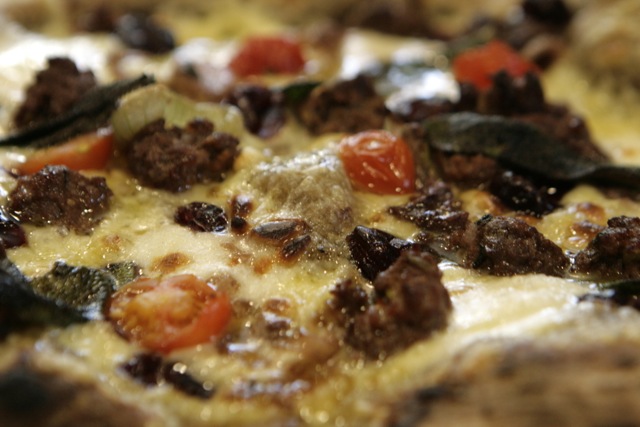 This was my second version of the pizza with the cranberries. There was some natural sweetness from the tomatoes, but the sweetness of the dried berries had more of a connection with the venison.

What can I say here.  We have about 90 – 120 seconds to wait.  As soon as the dough sets up from the heat on the floor of the oven, it’s time to slide the peel under it and turn it so it doesn’t burn!  I love cooking in fire, it’s always more interactive.

Add a little Sea Salt and Pepper to taste.

Add chili oil if you have any, but first enjoy this in it’s simplest form.

I hope you enjoy this one.

*As always send me your emails, comments on the site, and some pictures of your own pizzas!

Wow, so this is how they make one of my favorite pizza! I’ll surely make this at home, I just made a brick oven. There’s this pizza I really like from among Torino’s Pizza Oviedo that I was hoping to find in your blog. this is the link: http://www.flickr.com/photos/115753762@N04/12190752743/ of the pizza, I was just wondering you can help me with recipe. Thanks a lot.

Shoot me an email at Brad@pizzaquest.com and we can talk more about what you are looking for. Sounds interesting!