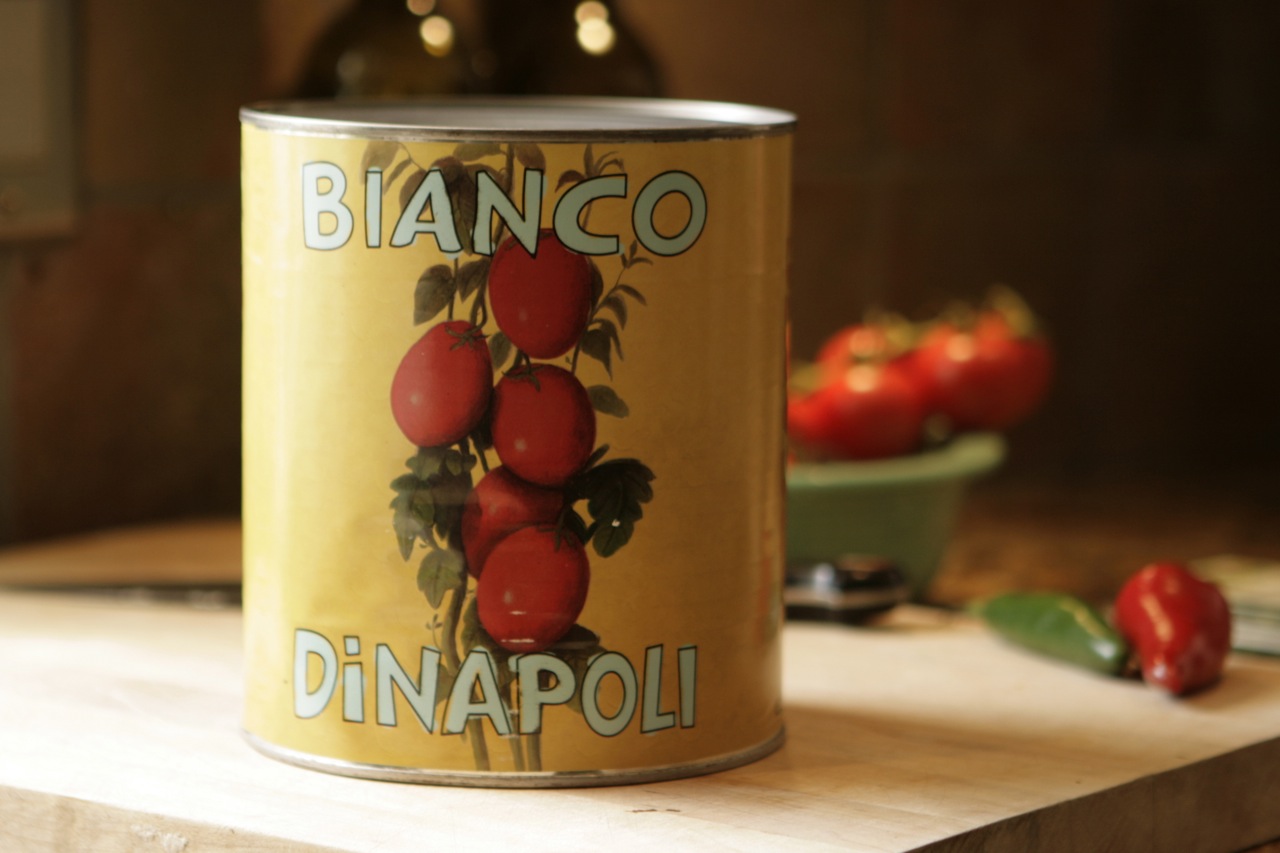 Sauce: Have Can, add can opener…

As many of you know, Chris Bianco has joined forces with Rob DiNapoli of DiNapoli Specialty Foods.  They have come up with a new product that Chris had been nudging Rob to create for some time.  There has been a limited supply of their new Bianco DiNapoli Organic Tomatoes available at some select pizzerias and restaurants and we have been lucky enough to be “in the loop”!  I happen to be sitting on a small supply.  So, I recently decided to use them here at home and make some pizzas to play with some pizzas that set the tomatoes up as the star.  Since we are running a series on Tony Gemignani and I know he’s one of the lucky ones to have a supply of these tomatoes I thought I would pick a few of his pizza to re-make here at home.

The first one I started with was his Coney Island Pizza.  This is one of his creations that featured the Bianco DiNapoli tomatoes that were simple hand crushed and placed on the pie with a little added sea salt.  It also had a number of ingredients that sing that siren song to me: hot peppers, spicy pork products, roasted yellow peppers and a blend of cheeses.

I had some of our Signature Bruery Beer Dough on hand from our last filming event down at the Bruery, so I used that.  Following is the recipe and photos.

But, there’s a big – aha moment I’d like to share!  As I was making this pizza, and setting up to make a few more afterward, my son Owen was circling the kitchen like a Great White waiting for the pizza to come out of the oven.  “Dad, when’s the pizza going to be ready?”  You all know how that goes.  I’m covered in flour, sauce, taking pictures, chopping vegetables, laying out the next set of ingredients, and I keep getting the occasional bump from my growing little Great White.  Anyway, I finished the first pizza, and he came in for his feeding – taking a slice and going to the table.

My wife, who was helping me, and I were working on the next pizza.  Out of nowhere Owen says: “Dad!  This sauce is awesome!”  I looked at Shanna, who knew that I was making all of these pizzas to play with Chris and Rob’s new tomatoes, but Owen (12) had no idea.  This hit me.  The sauce was the tomatoes processed through my fingers into a bowl.  That’s it.  I didn’t even add any sea salt, because I figured there was plenty of other things going on with the salted pork and peppers.  Maybe Rob and Chris got to Owen in a plot to make their sauce really stand out?  I don’t know.  He hasn’t purchased anything new with a secret source of income recently.  So, I’ll just say, wow!  And, it was good.  Each of the tomato pies I made that day were really good.  I’ll post the rest in the coming weeks…

I went to my local Whole Foods to get some ingredients.  I really wanted to find some good quality ingredients to put together with these tomatoes.  I had to make some substitutions while at the store, because certain things were not available.  That is part of the fun – trying something new, or finding a better option.  I couldn’t find any Calabrese Peppers – so I picked up some Hatch Peppers.  Apparently, these are the “hot” item these days.  I now see why!  They are spicy – very hot when raw.  But, I noticed that they became almost sweet when baked into my pizza while still being hot, but not overpowering.  I also found a great Spicy Coppa Piccante from La Quercia that was perfect for this pizza.

Spread your Dough *Any will do for this pizza
Add grated Mozzarella on top of the dough
Top with Hand Crushed Bianco DiNapoli Tomatoes (or, any other quality tomato)
Add the Coppa Piccante
Add sliced Hatch Peppers and Roasted Yellow Peppers
Add Chopped Serrano Chili
Top with Grated Provolone

Into the pre-heated oven it goes…when it comes out perfect…nobody knows. Ok, maybe we know – about 8-10 minutes for me.

I mucked up my dough on this pie – having it a little thin in the middle and it ripped a little.  So, the pizza wasn’t perfect.  So much effort, shopping, chopping, grating, hand crushing down the drain.  But, that’s only if we were just taking pictures.  This pizza rocked!  As Owen said, the sauce was incredible.  The blend of ingredients makes this one of my favorite pizzas in a while.  It will become a regular in my house for sure.  The hatch peppers were great, you can see I didn’t add many after tasting them raw, but next time, I wouldn’t be so shy.

Take a whirl at this one, and let us know what you come up with…