The Signature Pizza with Sopressata and Chilis 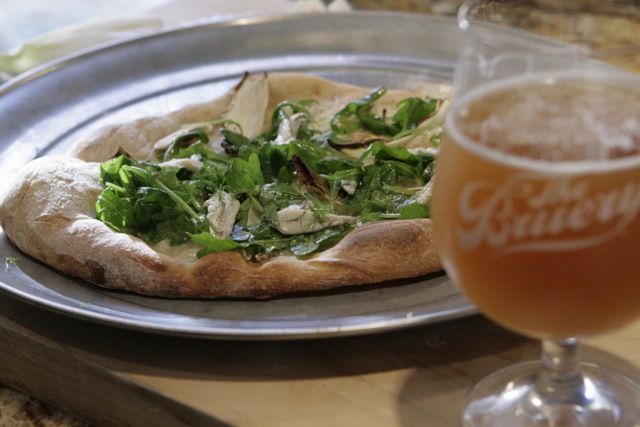 The Original with Anchovies and a Birra Basta

I love our Signature Pizza.  I didn’t come up with the recipe but, I was a part of the creation of the question, and the following ideas, that ultimately came together to become it.  I think how lucky we were to have Peter come up with a brand new dough that brought beer into the pizza – a pizza being designed to be paired with a beer that was to be created to pair with the pizza!  What came first… (no, this is not an Abbott and Costello routine, though it could be)?  As Peter wrote about in his Signature Dough Recipe post, you could just add beer in place of the water and do the same, but he “didn’t want to waste a perfectly good beer.”  (Maybe I’ll give that a shot in the coming weeks as an experiment for those of you who don’t have access to the Malted Barley crystal. When we were with Kelly Whitaker at Pizzeria Basta at the beginning of this journey we did make a test dough with a Bruery beer in it.  It was great.  I’ll definitely have to follow this up with a liquid beer dough for those of us who are just home cooks). 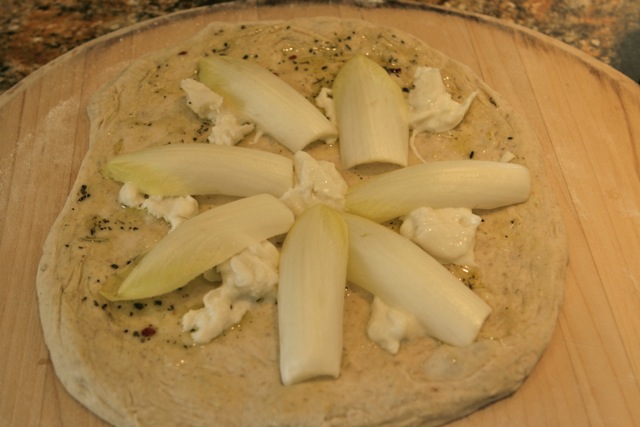 I like how the Belgian Endive works on a pizza. It is thick enough to retain a lot of it’s moisture. The edges char, but you get a warm juicy bit in the thicker parts of it.

I also think about how lucky we were to have met Kelly and his restaurant partner Alan Henkin.  They took this idea and ran with it.  They gave a lot of time, and put in a lot of effort, to create a one of a kind, truly unique pizza.  I was like a kid in a candy store watching it all happen.  Peter, Kelly, and Alan were also like kids in a candy store when we visited The Bruery, first taking a tour and then getting to make pizzas right there outside the brewery door in a mobile wood-fired oven.  I can only assume that owner Patrick Rue, and Tyler and all the guys at The Bruery felt equally delighted as they got to test their brewing skills to match the “Signature Pizza.” 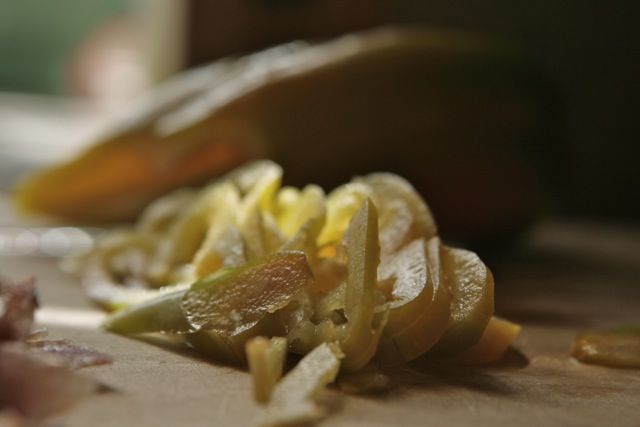 When Kelly made the final batch of pizzas in Denver for what we called “The Big Reveal,” he brought a variation for the anchovies.  I actually requested that he bring something along so we could try a a different variation with the newly created Birra Basta and see how that went with it as well.  Kelly, being Kelly brought a house cured pork belly.  If you have read any of my writing here you know I am a huge fan of salted/cured pork products.  Well, that pizza was definitely a winning combination with the Birra Basta as well.  So, here at home, I thought it only fitting to try a few versions of my own.  On top of that, my family, other than my son Owen, doesn’t much like fish.  Anchovies, I learned from them, are at or near the top of the list when you don’t like fish! 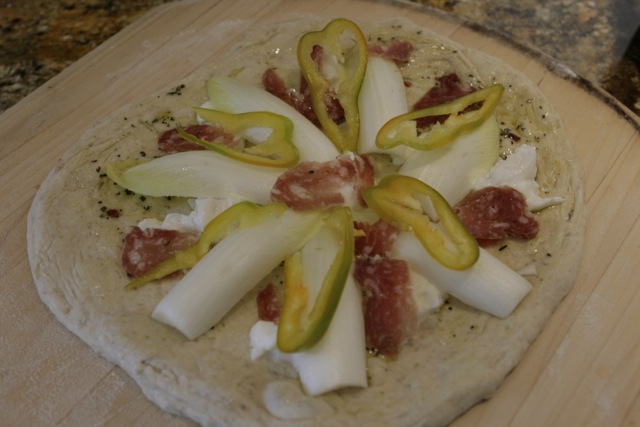 For this first variation I used a mild Sopressata salami, as well as some thinly sliced Anaheim Chili Peppers.  The rest was basically the same as the original.  I wanted to push this pizza a little toward Kelly’s house cured pork, but also adding another accent with the chilies.  It works!  There’s a lot going on here, from the savory sopressata, buratta cheese, and herb oil, through the chili’s announcement that it’s joined the party, to the subtle ping of the lemon curd popping in and saying “Hello there!”

Oh, and it did go down quite well with our “friend,” the glass of Birra Basta (yes, I managed to acquire a keg of that amazing brew now living in my special kegster fridge) playing off some of the same flavor notes that Kelly established, and adding a few more to challenge the pairing. 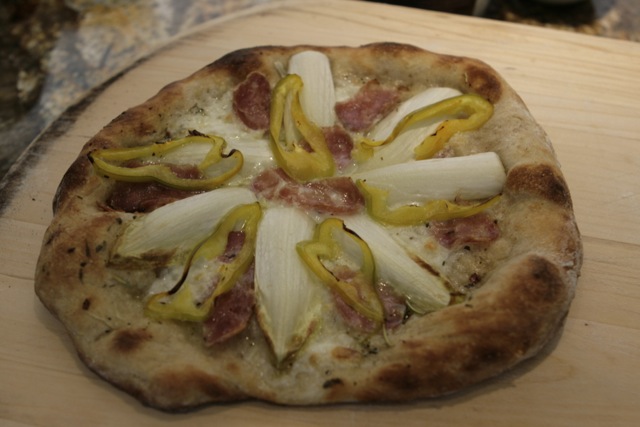 Out of the oven….

Pizza Quest Signature Beer Pizza Dough
(*Any dough will work, but I have to say it’s worth it to make this dough — see the archives in our Instructional section)

Squash Blossoms
(*I couldn’t find any, so I substituted a baby Belgian white endive)
Burrata Cheese

Preserved Lemon (*Kelly Whitaker made his own in a pressure cooker.  Lacking the time and skills, I found a baking product called Lemon Curd to use instead.  It gave a nice tart lemon flavor in bursts as well as a sweet finish.)

Anaheim Chili Peppers, or any other chili such as a Hatch, or even thinly sliced Jalapenos if you want a little more heat.

Fresh Greens
(*I had some wild arugula around.  This worked great.)

Fennel Salt
(*I didn’t have that, so I diced up a little fennel greens and sprinkled some sea salt to finish the pizza.)

Add the Burrata Cheese (considering how it will melt, spread, and cover).

Lay out the endive leaves.

Add the lemon curd, or preserved lemon, in little dabs around the pizza.  This is meant to be a surprise, not a dominating flavor.  It’s not a flavor you would think of for pizza but, as you’ll see in some coming recipes, I’ve become a big fan.  That may have to do with the fact that I have a mug of Birra Basta sitting next to me that Patrick infused with Lemon Peel during the brewing.  Maybe…

Add the Sopressata and Chili Slices 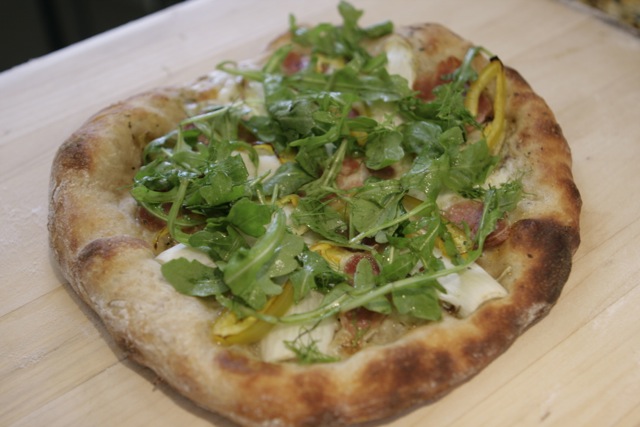 Add the greens to finish. Cut and Serve!

While the pizza cooks, toss some greens with a little of the herb oil or a favorite dressing. Or, you could just put the greens on as is.

Take the pizza out after 8-10 minutes, or when done.

Lay the greens over the hot pizza.

Sprinkle the fennel and a little sea salt across the pizza (sparingly).

Oh, and pour your second glass of bier!

This is a terrific pizza, if I do say so myself!  I hope you’ll try it and let us know what you think.

I’m not understanding how to actually find the recipe for this (and other) doughs talked about here. ‘Got to the instructionals’ OK – but I’m missing something I guess. Anyway, not finding the actual recipe when I get there.

Here is the Signature Beer Dough Recipe. Right now all of our Recipes and Instructionals are found in the Instructional section. You have to scroll to the bottom and look at the titles. I do want to fix this in our next generation website update here at Pizza Quest. Thanks for asking. Let us know how you like the dough!