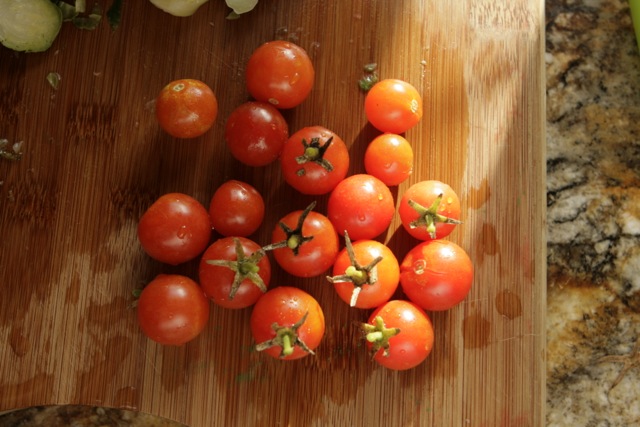 Oh my, this turned out to be a great pizza!  Take a walk with me down the wood fire brick road.

I had some Brussels sprouts sitting in a bowl on the counter that we hadn’t gotten around to cooking and I figured I better do something with them before I had to send them on their way.  I pulled a dough from the freezer and set about looking for some inspiration on the inter-webs.

I came across an interesting recipe on the Food Network site. I want to give full and due credit for the idea for this recipe. As usual, I often look around at recipes and see what I like and don’t like and basically take some of the main ideas and adapt the rest for my purposes.  I found this recipe for “Fried Brussels Sprouts with Walnuts and Capers,” which was published in the Food Network Magazine excerpted from Michael Symon’s book Live to Cook.  Though I was making a pizza, that title caught my eye and, after a quick look at the ingredients in the recipe, I knew I saw starting point here that I could work with.

Soaking some salt packed capers. I just like this photograph!

The next step was a mental run through of my assets.  What did I have around?  I had some slivered almonds, anchovies, salt-packed capers, and honey.  I believed I could pull this thing off, but instead of frying, I was — of course, going to run this all through my P-60 WFO!  What else did I have on hand to take this from playing a role as a side dish to turning it into a pizza?  I still had a cherry tomato plant that wouldn’t stop producing and some chili plants that were going strong. Prosciutto…  Fresh Mozzarella…ah!

This started sounding interesting and as the wheels were spinning, the train started to leave the station.  They started spinning and then slowed down as the frozen dough took its time to thaw on the counter.  A few hours later, though, that train was rolling again!  There was a fire growing in the belly of my oven. I was trying to finalize my loose plan to take off from the launching pad of Michael Symon’s inspired recipe and to create my own pizza.

This is the fun part of cooking for me. 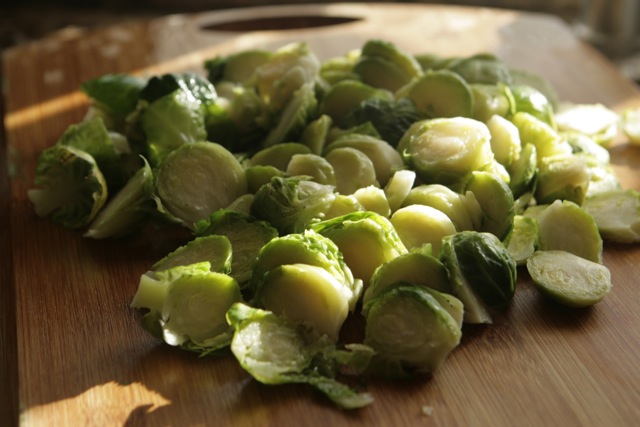 Par-boild Brussels sliced for their next part of this journey. 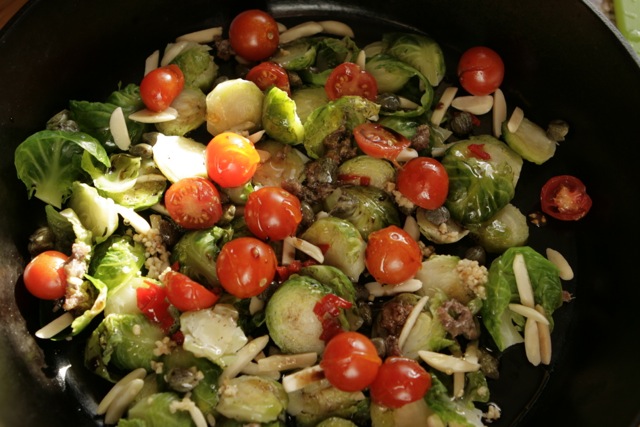 The ingredients gather in the pan…

I have a 10″ iron skillet that I use in my Primavera.  It’s about the size of a pizza, so I just used it as a visual guide while prepping my ingredients.  I like to cook without following any recipe too closely.  I prefer to “feel” how much of anything should go into a recipe.  I may have frustrated a few people here who prefer exact measurements, but I feel like that is one of the aspects of cooking that allows you to bring yourself to a recipe.  Every time you make something it will be a little different.

Par boil the Brussels sprouts.  When cool enough, slice them in half.

I grabbed enough cherry tomatoes from my garden to allow the tomatoes to become both part of the sauce and to act like an ingredient.  So, I sliced some of them in half and threw some in whole.  Cherry tomatoes are an amazing way to add a burst of flavor on a pizza!

If using salt packed capers, which seem to be the best, rinse a few times and set aside.

Chop up and seed the Serrano chili. 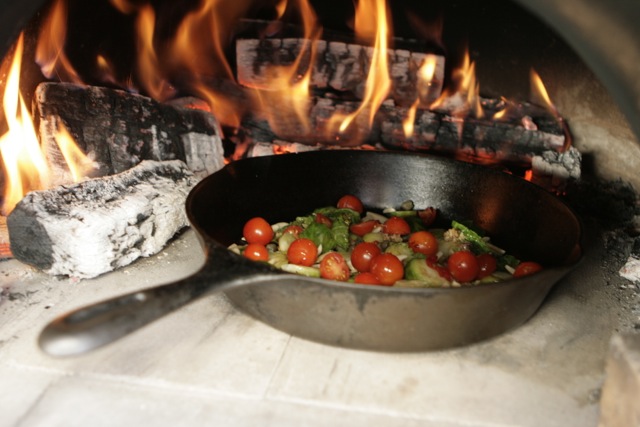 Drizzle some olive oil into the pan.  Start adding the ingredients. 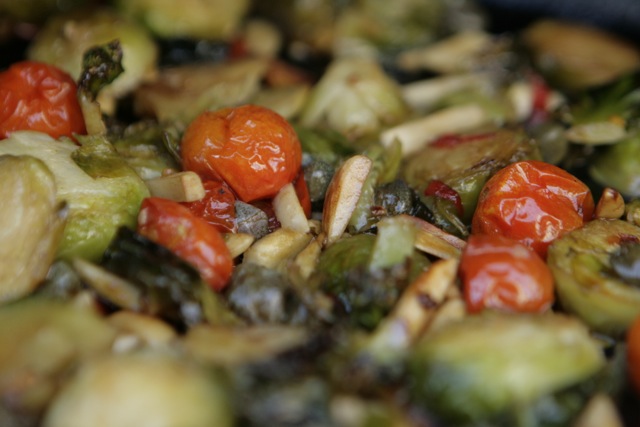 Roasted together, this becomes the sauce and topping on this pizza. A delicious side dish as it is right here!

Give it all a little toss, or mix to blend with the olive oil, and slide it into the oven.  *Note: This would work fine in a home oven as well.  I think it all roasted in about 10 minutes in the WFO at 800 degrees or so, so just give it more time in your home oven at 550 degrees.  You want to roast it to the point where it’s almost finished.  You have to consider that it will finish roasting when it goes back into the oven on your pizza.  In a way, this is par-roasting – just like par-boiling!

And now it becomes a pizza!

Spread your dough out and lay on a well floured peel. 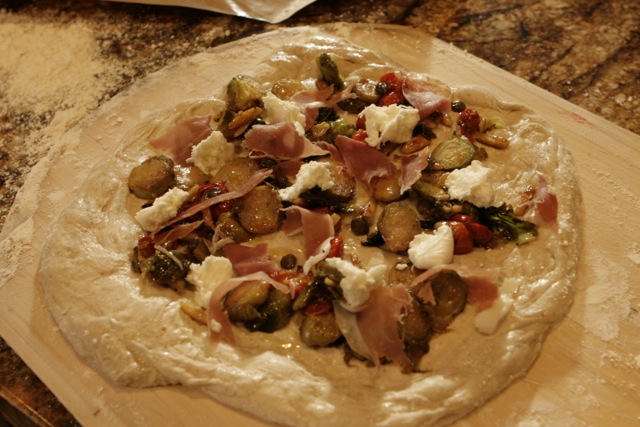 Spread the roasted brussels mixture and add the mozzarella and prosciutto…

Spread your roasted Brussels onto the pizza.

Add some pinches of your fresh mozzarella around the pie.

Tear some prosciutto and place it around the pizza.

*As I often say here, as you are placing all of these ingredients together on the pizza think about they balance with each other.  In this case, I spread the roasted Brussels out on the pizza knowing that I was also going to add some mozzarella and prosciutto.  This is important with cooking, but in a way it’s even more important when making a pizza because these ingredients don’t only have to blend together as they bake, but they also will be delivered to you on a bed of dough. Each bite will be what it is. You don’t build a forkful from your plate to do your own blending of ingredients.  With pizza you take a bite and that’s what you get. 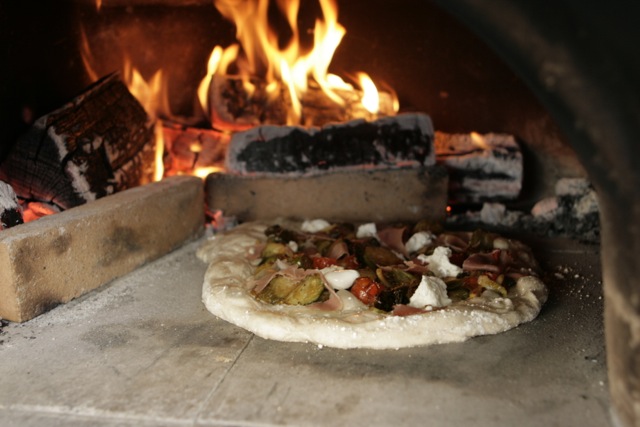 I am playing with using some low fire bricks to help the pizza cook more evenly. I’m not sure this is necessary.

Into the oven it goes.  My Primavera delivered it back to me in about 2 minutes.  It’s so giving!  So selfless!  In a way it would be nice if it took more time, because I love feeling the heat of the fire on my face as I lean down and watch the pizza rise to the occasion.

It hit the mark!  As I write this, I’m still thinking about it.  There’s really more going on in this pizza than I originally thought.  The roasted charred Brussels give that almost subtle 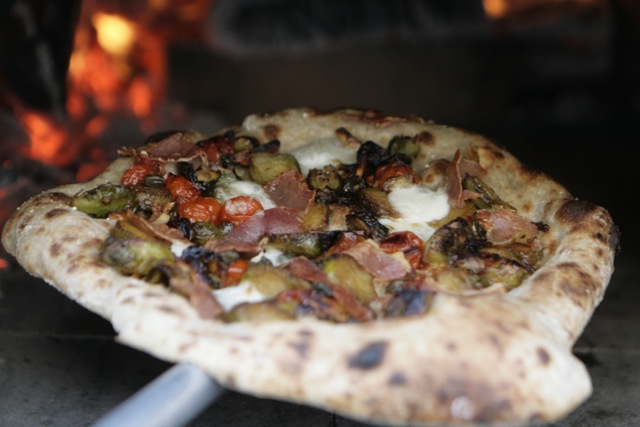 bitter base that allows the other ingredients to pop even more.  The saltiness of the prosciutto and capers pops in your mouth.  The sweetness of the honey dances around the spicy notes of the Serrano.  The soft milkiness of the mozzarella plays with the juices given out by the tomatoes as they collapse and give up their liquid to create a sauce as well as their explosive pop of sweetness.  Oh, but wait, this isn’t over.  The almonds then bring another textural experience to the whole thing.  They softly crunch as you chew up their toasty-roastiness!

What diameter pizza are you making?