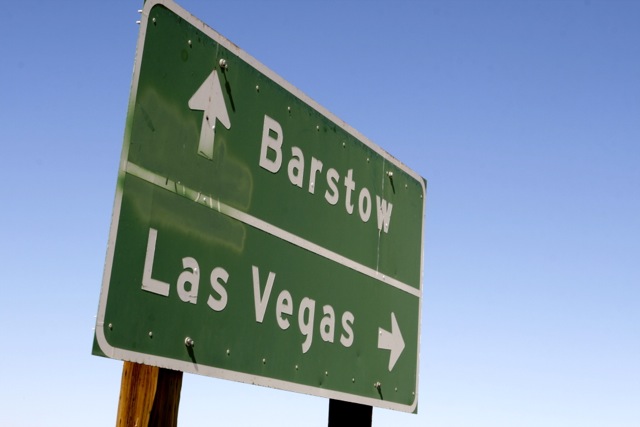 While my father still sat in denial to what the desert truly revealed about itself, I pulled off the road to get a closer look at the sage dotted landscape and grab a photo of this lonely sign.

A few months ago I went to Las Vegas for the Pizza Expo.  I wrote about visiting with John Arena of Metro Pizza.  While driving to Vegas I had been a little lost in thought.  No, I wasn’t on my phone, but I was drifting along somewhere out in there in the desert.  I was thinking about the email exchange I had with John and the fact that he mentioned he’d love to make some pizzas with me.  As this worked it’s way around my brain, I started noticing that the desert valley I was in was reminiscent of something familiar.  I was driving along in an air conditioned car, with a cool venti iced latte from a Starbucks stop a while back.  I said to my father, who was riding with me, “Look at the mountains that are encircling us.  Don’t they look like the crust of a giant pizza?” 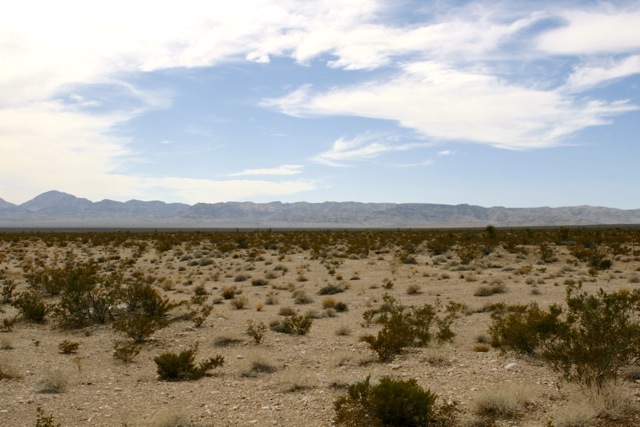 It’s right there! You see the cornicione out there? The crust?!! Look at the herbs and the cheese! I admit this flat photo may not capture it all, but if you are in one of these pizza valleys seeing it in 3-D Surround Sound with an Iced Latte…it’s a whole different story.

He looked around and said, “No.”  I told him he was crazy and unimaginative!  All he could see was the white sand and scrubby sage and rocks.  “Can’t you see how the sage brush is like little bits of herbs poking out from the desert sand (which would be the cheese)?

We then came upon a hill that appeared to be formed from a lava eruption, or burst from under the ground.  To me, that was it, it sealed the deal, I was literally in the middle of a giant 10-mile wide pizza and that burnt rock hill was a bubble in the crust.

I think I brought it up to my father again in the next valley. (There are two distinct “Pizza Valleys” on Hwy 15 from LA to Las Vegas — you heard it here first.)  He just couldn’t see my vision. Topics turned to the more mundane banter bouncing between laughter and arguments that we always have – especially while trapped in a small car for 4-5 hours together. 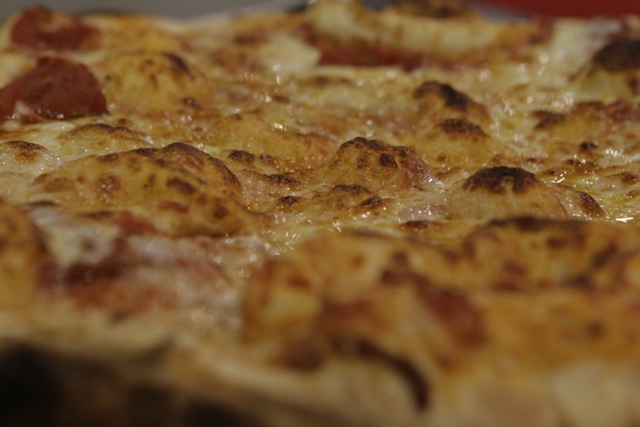 Look closely at the burnt air bubbles on this baby. This is tough to get in a home oven and is why I’d like to meet up with John and play some more with this concept.

I’ve written before about my experience meeting up with John Arena at the Pizza Expo, which was great.  During the show, John took me by a booth that he had made dough for and I noticed that there was a huge air bubble with a burnt top.  I mentioned my desert pizza “vision” to John and, being far more visionary than my father, he loved the idea.  We kicked around some ideas for desert ingredients.  On my way home I was all ready for the pizza valleys and admittedly, I did ask Dad one more time, if he could see it.  After being at the Pizza Expo, he was more receptive and inspired, and thinks he saw something.  Some people are just blind to what’s right in front of them. 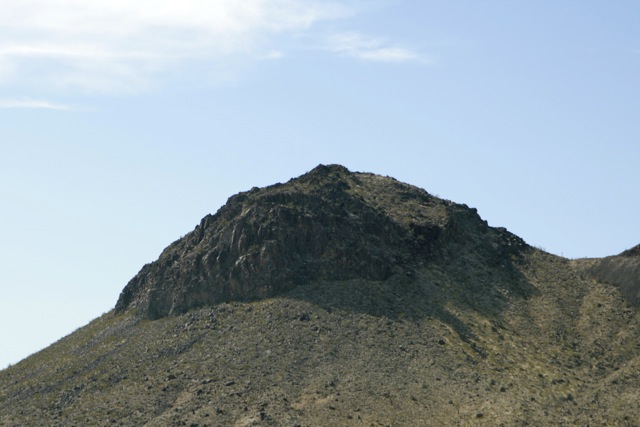 When I got home, I Googled “desert ingredients”, “desert plants”, “Native American foods of the desert”, even “Culinary History of Nevada” etc.  I was amazed at what there was.  I read a lot about how the desert Indians ate.  Interestingly, and perhaps an idea for another pizza inspired by the mid-late 1800’s, there was quite a large migration of prospectors that came to Nevada to find their fortune.  One of the culinary heritages to grow, and still remain, from this migration was a Basque population and culinary tradition.  I was now even more drawn to the desert and it’s origins, and began figuring out a way to make a pizza that could come from the land, or at least represent it.

The ingredients I chose to focus on were:  mesquite, cactus, pine nuts, pancetta (representing the wild boar, or javelina that are found in the desert), jalapeños or chilis, and sage. I made a couple of pizzas.  Here’s my first…

While researching ideas for this pizza, I inevitably came across mesquite, which many know as a “flavor” associated with grilling.  This could be an interesting thing to add to the wood mixture in a WFO.  Though it’s not necessarily associated with Nevada, I felt that it did embody desert life and was heavily used by Native Americans as a staple food source.  They create a mesquite flour by grinding the dried mesquite pods down in a mill.  It lacks any gluten and has a very intense flavoring – which changes when cooked/baked.  It can become bitter.  The website where I purchased my mesquite generally recommends blending the mesquite flour at 1/3 of the volume of what you are making. 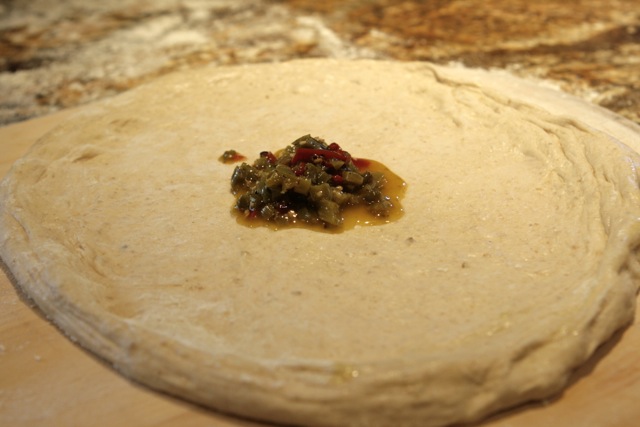 I chose a Fire-Roasted Western Honey Mesquite Flour to try.  Peter suggested I start with my first batch at 10% mesquite to flour.  I used the basic Neo-Neopolitan Pizza dough and added in my mesquite.  *If you’ve read my blogging much, you’ll have heard a few comments by my son Owen, or other family members.  Owen may have a knack or a tuned palate.  I once was making a few pizzas with some Bianco DiNapoli Tomatoes, used straight as the sauce, to see how good they were.  Owen said, “Dad, this is the best sauce you’ve ever made!”  Well, I opened the can.  Thanks Owen!  He did it again with this Mesquite Dough.  He said, “Dad, this is the best crust you’ve ever made!”  He had no idea I made this with the mesquite.  He just showed up for some testing of the finished product.  Anyway, it’s good.

Here’s a link to The Mesquitery where I got the Fire-Roasted Western Honey Mesquite Flour:  www.mesquiteflour.com 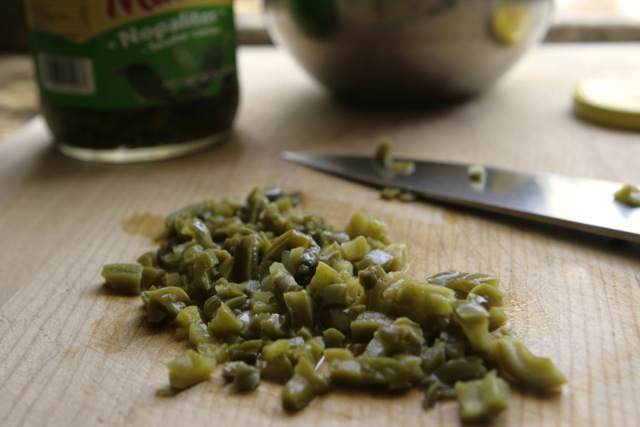 The pickled cactus are amazingly sweet and juicy with a nice pcikley bite.

The idea for this “sauce” comes right from Jersey’s own Mossuto’s Pizzeria.  Here’s the link to my version of their Fat Lip Pizza – *Link.  I wanted to incorporate cactus into the pizza for obvious reasons.  When you think of the desert it’s likely one of the first iconic images that you think of.  I picked up a jar of Pickled Nopalitos (Cactus) and had a jar of “Mom’s” Soy Pickled Jalapeños around and went from there. 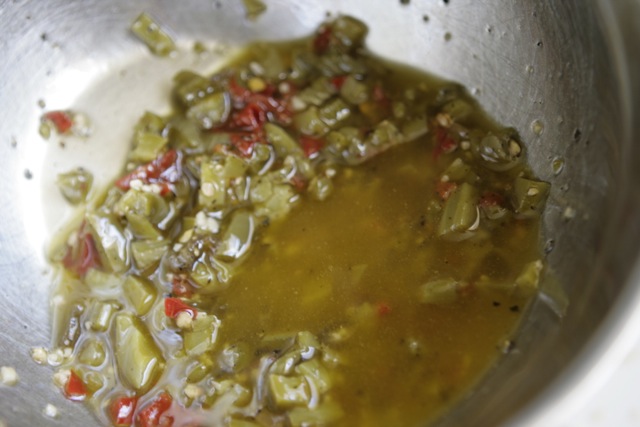 When you blend up all the ingredients, look at oil. It quickly becomes a nice herbed/spiced oil. Allow it to sit, or make ahead of time to further blend the flavors.

Chop the cactus and jalapeños and some garlic to taste and place in a bowl.

Measure and add ingredients to taste.  The cactus is somewhat sweet with a nice tang from the pickling.  The jalapeños add some heat and a little salt – because I am using my soy pickled jalapeños.  Pull the solids from the sauce onto your pizza, being careful to manage how much oil you get on the pizza. You don’t want it to be too runny.  Mix the ingredients and let sit to marinade for as long as you can for the flavors to come together. 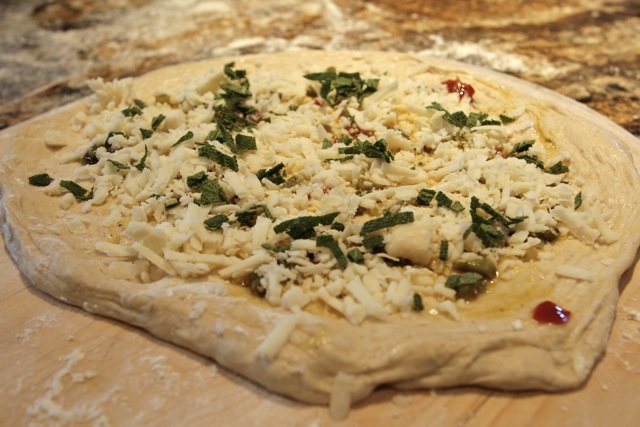 The torn pieces of sage leaf were to represent the spotted brush along the desert floor.

Add a scoop of the sauce and spread across the dough.  Add more as desired.

*When I was shopping for a cheese for this, I ran across this goat milk cheddar and thought the goat would be of an appropriate animal to have found in a desert.  If you can find it, use it!  It worked really well on this pizza.  (Then again, I’m the guy who sees pizzas in the desert, so you better decide for yourself.)

Add some of the chopped sage Leaves

*Mine are laid out representing a crossroad cutting through the pizza.  Okay, I know this is pushing it, but I’m just being honest here.  Try it, you’ll like it.

Into the oven it goes. 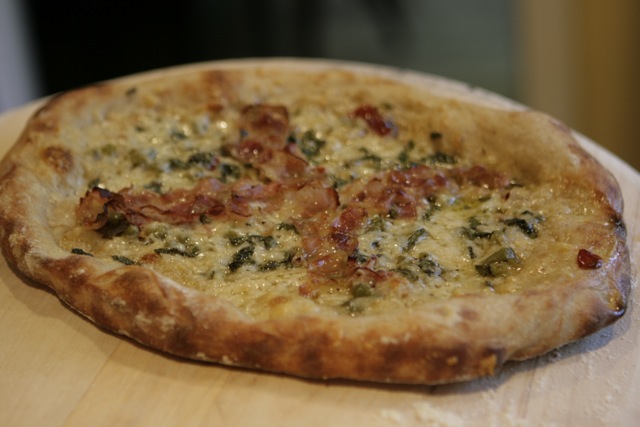 Just out of the oven.

We’re not done yet.  While baking, I took some whole sage leaves and fried them up to a crispy texture in some of the Cactus and Jalapeño Sauce oil.

When the pizza comes out of the oven, add the crispy whole sage leaves on top.  This was great.  They added an amazing flavor, but the crispiness also gave them an additional and unique texture. 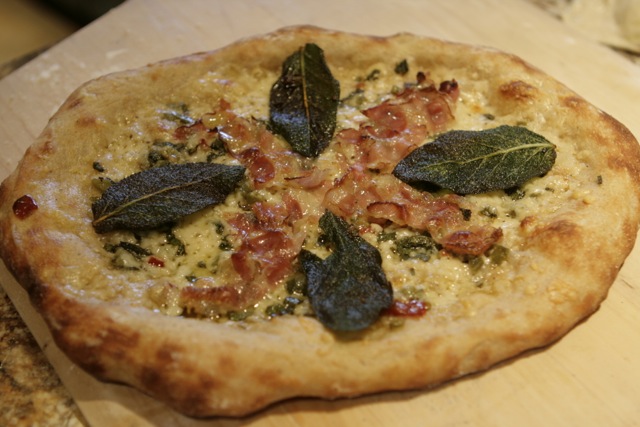 The fried sage may make this pizza, other than the mesquite dough, the cactus/jalapeno sauce and use of goats milk cheddar, it’s the ingredient that stands out.

This pizza turned out great!  Like I said, my son loved this crust.  The mesquite gave it a very earthy flavor – a toasted nuttiness that is reminiscent of Peter’s Country Dough that uses a small portion of whole wheat along with bread Flour.  The dough was soft and puffed up enough in my home oven.  The flavors all complimented one another and made the sum of the parts better than the individual pieces.  I couldn’t get a puff burst to represent my burnt hill in my home oven, but some day we’ll have to try this in a Wood Fired Oven.

Let me know if you make this pizza and what adjustments you come up with.  If you ever drive from LA to Vegas, keep an eye out for the “Pizza Valleys” and tell me if I’m insane, or if my father simply has no imagination!

On another note, I had sent photos of this pizza to both Peter and John Arena after I made it, because I was so excited about how it came out.  John responded with an interesting thought: 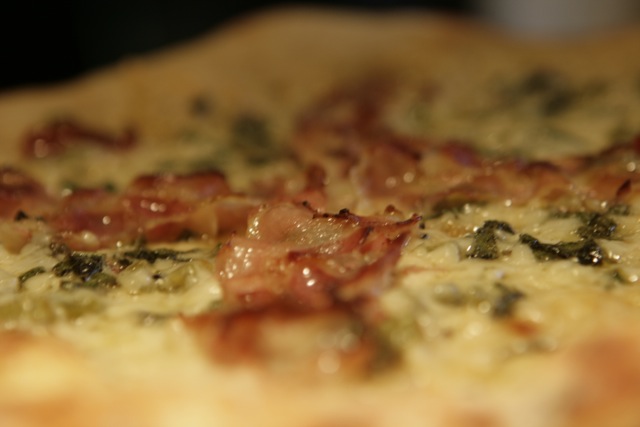 “Peter, I think Brad is really onto something with the idea of creating regional pizzas that make a conscious effort to reflect the cultural, historical and topographic influences of a particular place.  To me this is a logical extension of what Chris Bianco initiated and is far more true to the Italian model than simply trying to replicate the pizza of Naples.  Besides that, it’s fun and shouldn’t there be a spirit of joy, adventure and even whimsy in our pizza quest?”

We spoke some more and John thought it would be a great idea to do a contest, or get people involved in creating their own regionally inspired pizzas.  If we were a big website, maybe we’d do a contest.  Maybe we will some day, but I had so much fun making this pizza (and a few others along the same idea) that I thought I would share John’s call to create!  So, if you’ve got any wild ideas and a camera – make up something delicious and share it with us.

you’re really a excellent webmaster. The web site loading velocity is amazing.
It sort of feels that you are doing any distinctive trick.
Furthermore, The contents are masterpiece. you have
done a wonderful task on this matter!