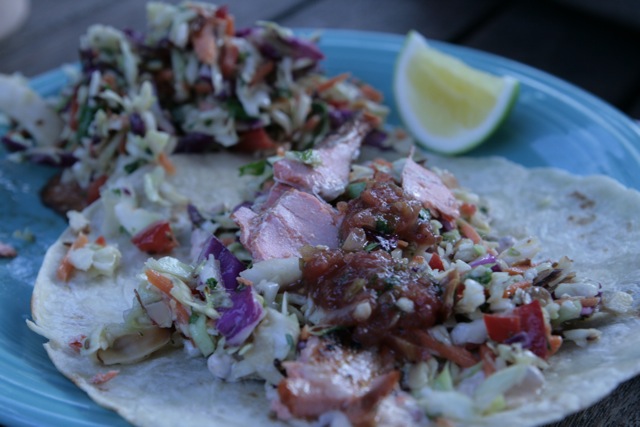 It’s officially Fish Taco season here at Pizza Quest.  Why not?  It’s summer and there isn’t a better time to enjoy the fresh summery flavors than in a great fish taco!  As you’ve seen in recent webisodes, we stumbled onto two incredible fish taco places while visiting The Cass House Inn in Cayucos, CA.  Both the Taco Temple and Ruddell’s Smokehouse create some of the most delicious fish tacos I have ever had.  You will see later this week, in an upcoming webisode, how our passion for great fish tacos translates into a truly unique Central Coast Signature Pizza designed by Chef Jensen Lorenzen and Peter, using some of Jim Ruddell’s fresh smoked Albacore.  So, sit tight, as we keep exploring the world for memorable foods. 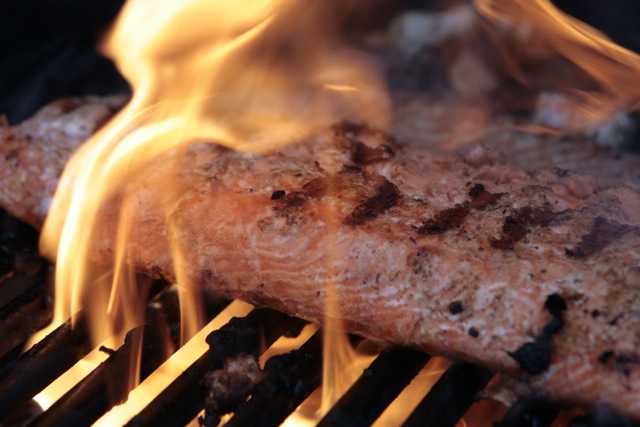 While we’re on this subject, I want to share my own fish taco recipe, one that I have worked on for a few years now.  It is an attempt to recreate what I have long considered the best fish taco I ever had.  It was in Vancouver, BC. There is a small fish shack located on the harbor just off Granville Island called Go Fish.  It is an institution there — I have seen lines winding along the sea wall, as up to 50 people wait in the sun or rain for their chance to have some of the freshest fish in the Pacific Northwest.  It is that good! 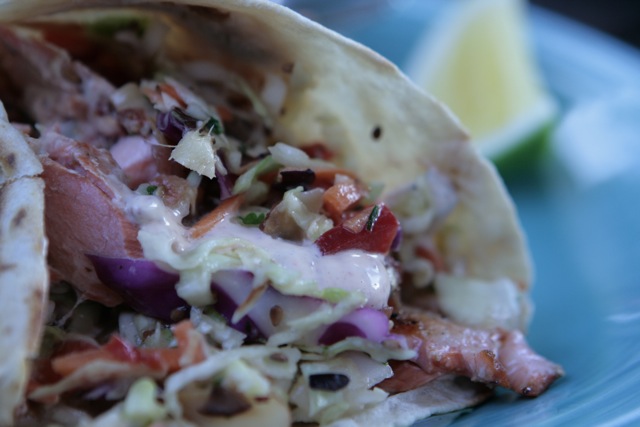 The perfect fish taco: a combination of the warm grilled fish and tortilla with the cool, chipotle tartar sauce, slaw and salsa.

I fell in love with their tacos, which they call Tacones.  These are not formed by folding a corn tortilla like a typical taco, but rather, using a flour tortilla and rolling it like a cone. The tacos are simple: fresh fish that varies based on what’s available from the boats only steps away, a delicious tangy Asian cole slaw, and a spicy tartar sauce.  But, somehow, their ingredients come alive when mixed together, creating what has remained atop my list of most memorable foods.  I will admit, it may be that sitting only steps away from the very water that the fish was caught in adds to the memories but, regardless, this taco is, for me, the very definition of memorable.

My wife, Shanna, and I became a little obsessed after one of our trips there, with trying to recreate these tacones at home.  Getting a good piece of fish is absolutely necessary, and if you can, I recommend grilling it over charcoal instead of a gas grill, but that’s the easy part.  We had to figure out the slaw and the tartar sauce – that’s what really brings it all together.  The slaw they created at Go Fish is fresh tasting, full of flavor, and really brings the fish up to a new level.

Shanna scoured the internet for Asian slaw recipes, looking to see what ingredients were in them, to see if we could find something that at least matched what was in our minds.  She found one, read the ingredients to me, and we both said, this is the one.

Shanna found a recipe and we started playing with it, making some adjustments. 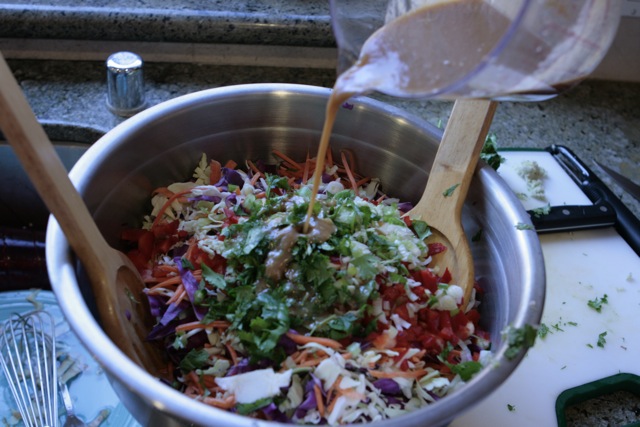 –Mix all cabbage, carrots, bell pepper, green onion, *cilantro, almonds & sesame seeds.
*I am a huge cilantro fan.  I usually throw more in over Shanna’s shoulder, or while she’s turned away. 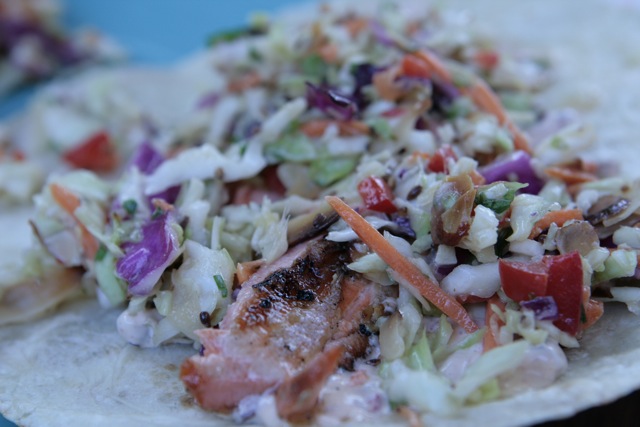 Place plenty of slaw in tacone, and serve more on the side.

–Toss it all together and it’s ready to use.
Note: Taste the dressing and, if it’s a little too sweet, you can add a bit more soy sauce and vinegar to taste.” The flavors will continue to blend in the refrigerator.

Here is the link to the recipe we originally found:

http://allrecipes.com/Recipe/Asian-Coleslaw/Detail.aspx
We cut the link recipe in half (which is the adjusted version above) and added and substituted a few things.  We changed to Seasoned Rice Vinegar, Sesame Oil, bagged cabbage and carrots.  and added the toasted almonds and sesame seeds. 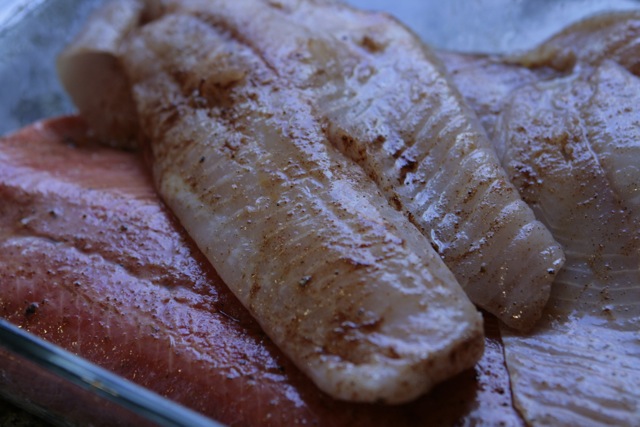 Maranade Fish just prior to grilling…

Fresh Fish: Use anything will work.  We love to use Salmon, Albacore, Red Snapper, or even Talapia.

I put a little olive oil on the fish and season it with salt, pepper and then, for color and a little spice, some paprika and a dash of Chili Powder. You can also add Adobo and maybe even a little Cayenne if you want some more kick.  Then squeeze some fresh lime, or lemon juice over the fish –or, both. 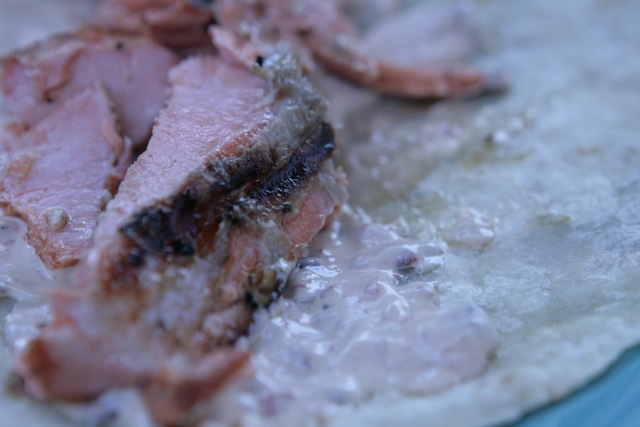 Grilling fish over charcoal, with some wood chunks always improves grilled fish dramatically.  The smoke adds another dimension to the flavor. I like to cook the fish just long enough, and then put it all on a plate and cover the plate tightly with foil.  As you are getting ready to eat, the fish keeps cooking a little and the foil seems to hold in the moisture and the fish comes out really moist.

We do a Chipotle Chili Tartar Sauce, based on any basic tartar sauce recipe, and just throw this together without much measuring.  Put in as much of the following ingredients as you want, to your taste.
(You can find exact recipes via Google, or Food Network for Spicy Tartar Sauce, or Chipotle Tartar Sauce.) 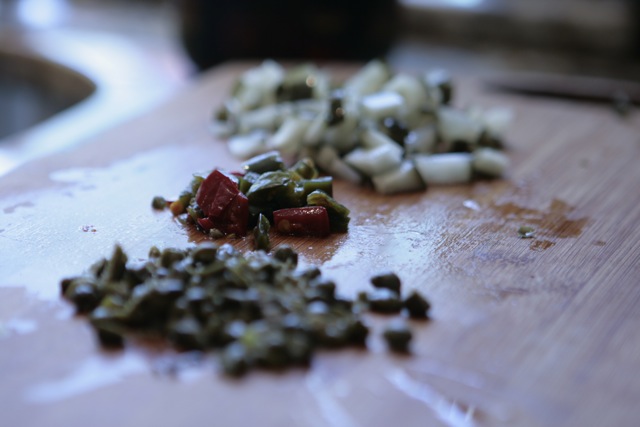 To make:
Put a big glob of mayo in a bowl. Dice and add to the Mayo:
–3 of the Chipotle Peppers and its sauce – or more later depending on taste/color. Finely chop them and scoop it all into the mayo. 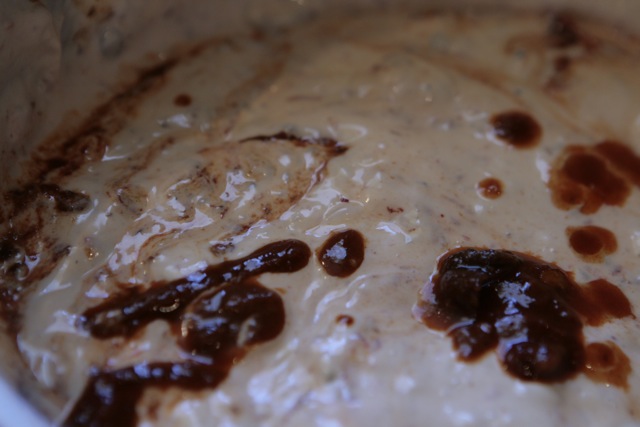 –Chopped pickles – as many as you want. I like the crunch they add.

–Capers — I give a quick chop to the caper pile.

– Stir the ingredients together.

The tartar sauce turns a beautiful burnt orange color with the Chipotle peppers. 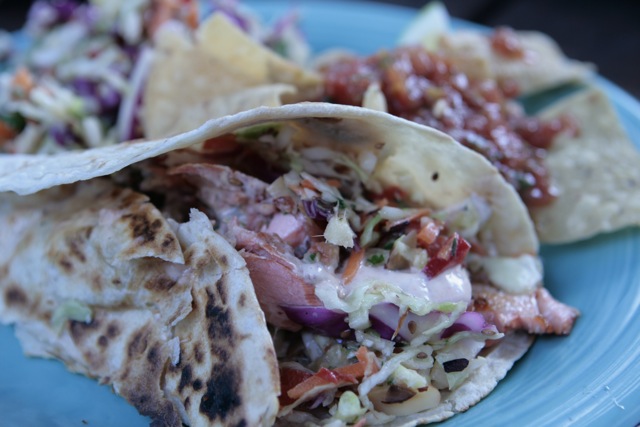 –On medium sized flour tortilla (about 8”), ideally warmed on the grill grates, giving them a slight char here and there on each tortilla, spread some of the Chili Tartar Sauce – a good amount.

–Lay out some of the Cole Slaw on the sauce.

–Break up some of the fish onto the bed of Cole Slaw.

–squeeze a bit more lemon, or lime on the fish.

–Roll the tortilla into a cone — that is, a TACONE and eat.

Serve with a pile of coleslaw on the side and, maybe some fresh salsa and tortilla chips.

To capture even more of the Go Fish experience, you should add French fries, (aka “Chips”) and sit outside next to a harbor!  Or, make the trip up there, because they not only serve amazing tacones, but the absolute best Fish and Chips you’ve ever had.

Let me know what brilliant additions you find and add to these. It’s a quest–it never ends!!

We once again found ourselves at our friend’s the Wildermuth’s where we have worked on this taco concept together many times in the past.  Here are some more pictures from our gathering that show more details of the process for making this delicious summer feast.