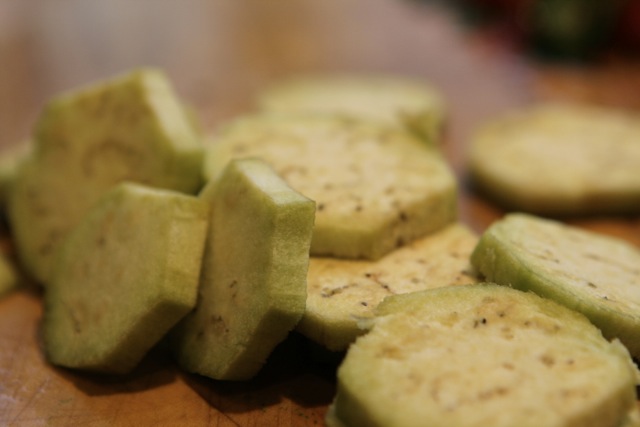 I remember standing in line late one night, or rather early one morning on New Years Eve, down in Hermosa Beach at one of our favorite local NY Style Pizza by the slice establishments called Paisanos.  I always used to joke with my wife and friends when one of the owners would call out to someone “Hey Paisano!”  I would say, “I thought I was Paisano!”  When they showed up a few years back, when I was a younger man, I would more often than not find myself wandering by, looking for a slice or two after being out for the night…if you know what I mean.   It was nice to have the added ambiance in this NY Style pizzeria here only a block off the beach in Southern California

Lightly breaded and seasoned with only a little olive oil…

that came with a cast of NY Paisanos who felt at home barking out their indignant proclamations with their freshly imported NY Style attitudes. On this fateful New Years morning I placed my order for my favorite pizza — their Roasted Eggplant and Sliced Tomato Pie.

Well, it turned out to be the LAST pizza of the night. (I already mentioned that it was late!)  I think we alll know how good a late night slice of pizza can taste.  Now imagine it’s the last late night pizza available and there’s a line out the door behind you.  My small group of friends formed a wedge as we moved out the door and ran for our lives to catch a cab home! 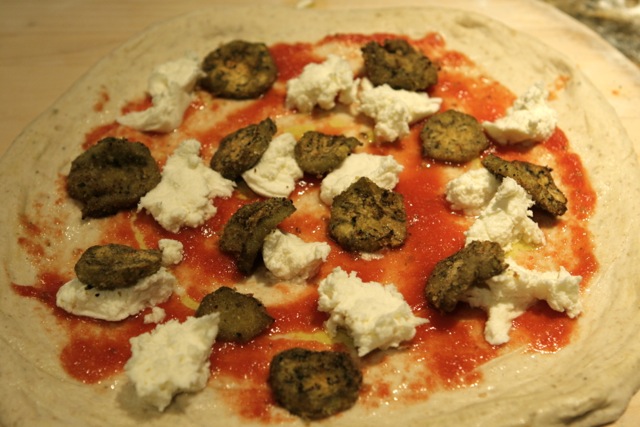 Pinch off chunks of the Fresh Mozz and spread the roasted eggplant across the pizza.

Yes, that last pizza of the night did hit the spot!  Perhaps this why I love eggplant on pizza so much.  I loved it before this, but since then, there is a more solid connection with the triumphant memory of being the “one” who won the lottery that night with this simple ingredient.  I was recently in our forum looking around and found a discussion where eggplant came up.  It hit me like a ton of bricks!  I couldn’t believe I had I waited so long to play with this ingredient in my pizza making at home.  My Paisano memories came flooding back and I knew I had to pick up some eggplant! 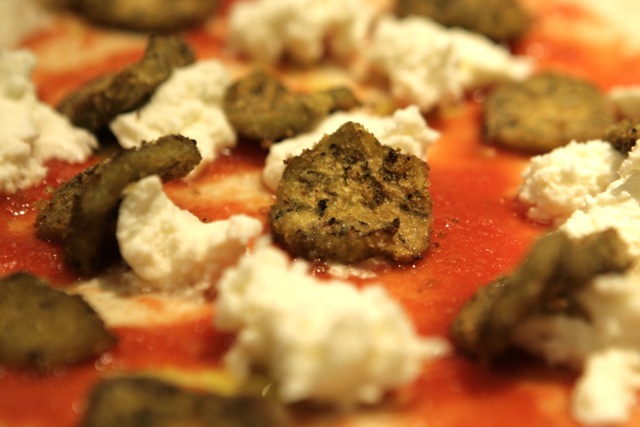 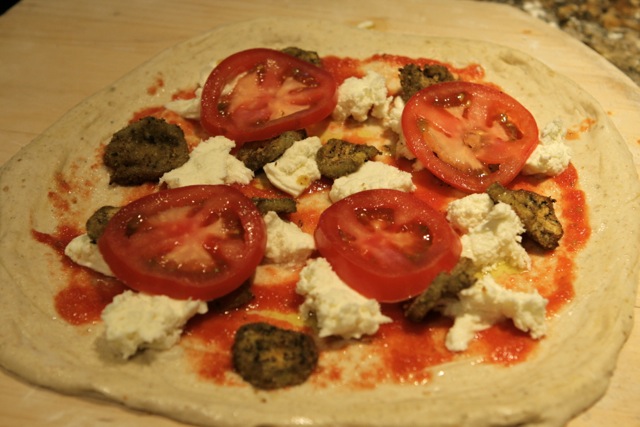 A few sliced tomatoes to roast while baking.

Peter’s Crushed Tomato Sauce is a perfect pizza sauce. Once you make it a few times following his recipe, you can start to do it on your own, just adding what feels right.  This is so simple and tastes so fresh I really don’t see any reason to do anything else when I’m using a tomato sauce.  When I first tried it after reading Peter’s book, American Pie: My Search for the Perfect Pizza, I literally thought, “This is it! This is the perfect pizza sauce.”  Now I know perfect is not possible, but this may be an exception. 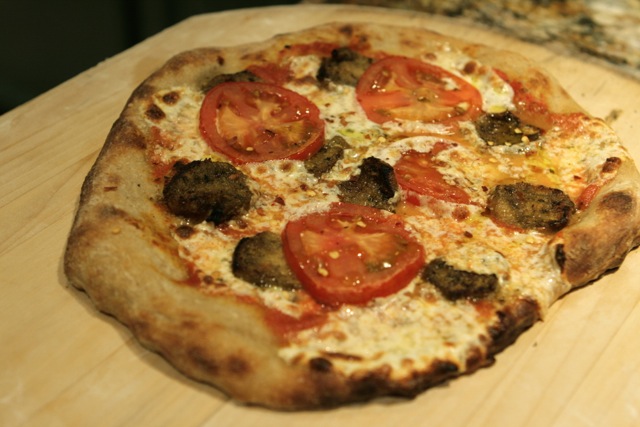 There’s a nice balance of ingredients.

Get your oven going early, to Pre-Heat your pizza stone to the highest temperature, for at least an hour before cooking your pizzas.  I threw the eggplant into the oven while it was heating up to pre-roast it.

Peel the skin off the eggplant and slice into 1/4″ slices.
In a bowl mix the slices with Bread Crumbs and add in some herbs and spices to give them that special touch.  I poured a little Olive Oil and then added some Oregano, Basil, Garlic Powder, Salt, Pepper and actually a little Cayenne because I’m insane.  You’ll see I didn’t overdo it in the photos.

I pre-roasted them until browned, pulling them out of the oven in time to allow them to finish up on the pizza (but they do need to soft when you pull them out).  I didn’t time this, but think it was about 20 minutes as my oven was already hot.  Check it after 10, 15 etc.

The Prep and Build:

The eggplant is moist and still has some nice charred crispy edges.

Build the pizza by placing the Crushed Tomato Sauce on the dough.

I added a swirl of Olive Oil to the sauce

Add pinches of the fresh Mozzaarella

Add sliced/chopped basil after the bake.

Add the sliced tomatoes (Play with the thickness of the tomatoes to affect how much moisture they will hold after baking, but a scant 1/4″ thick is probably ideal). 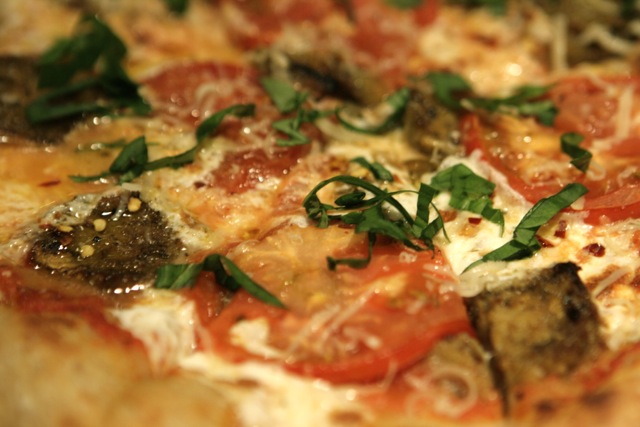 Finish with fresh basil, and maybe some chilli flakes and a little grated Parmesan.

Place pizza into the oven.  If you have it, switch the oven over to Convection Bake, which seems to give me a better bake.

Check the pizza in about 7 Minutes.  When it’s done, remove it.

This pizza came out beautifully.  I used a thicker cut on my tomatoes, so the overall pizza, was initially “wet”.  But, as it cooled, it settled down.  I added the basil, sliced it up and remembered a simpler time, before kids, late one evening, walking down the street with some friends and a piping hot Roasted Eggplant Pizza from Paisanos.

(*The cayenne was interesting.  Play with the seasoning on the eggplant, it’s a great vehicle for flavor.  With the bread crumbs and pre-roasting you also get a little crunchy texture going on after the final bake and even some charred crispy bits.)

Give this a try and send us your own versions with photos and a story!

The contrasts in textures, such as something crunchy in an otherwise smooth dish, may increase the appeal of eating it. Common examples include adding granola to yogurt, adding croutons to a salad or soup, and toasting bread to enhance its crunchiness for a smooth topping, such as jam or butter. Thanks a lot.
Regards,