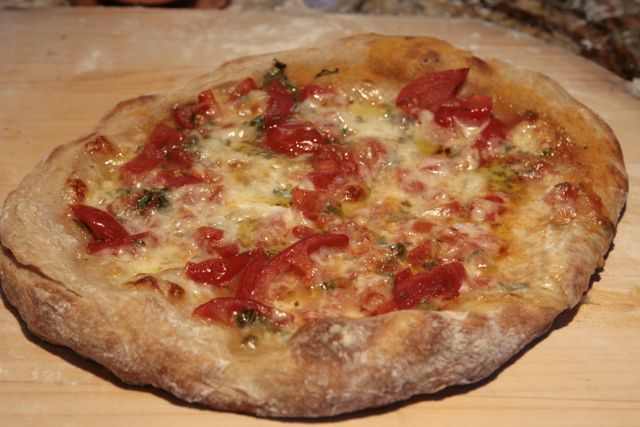 When I make pizza, it’s always an event.  Baking in a home oven, I can’t make an extra large pizza for the family, or friends and call it a day.  I’m limited by not having one of those large pizza ovens!  Frankly, I don’t think I’d like to do that anyway.  Half of the fun in making pizza is trying a few different recipes, or letting the kids or guests build their own. 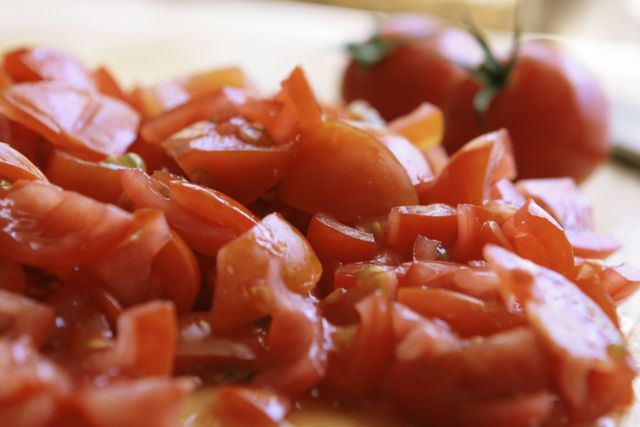 Fresh Bruschetta is so simple, yet so good!

I usually make enough dough and toppings to have enough to ensure there will be left-overs.  I think this may be one of the main things I learned in college – cold, next-day pizza is an important part of life.  It’s not as good as when you first have it fresh out of the oven, but it somehow isn’t far behind.

Another ritual that I have developed during my pizza making sessions is to come up with a few recipes and buy the ingredients for those, but leave a pizza or two to chance, or try something new and spontaneous.  I usually leave these pizzas till the end, to use up the ingredients, and to try different combinations.  This is how I came to play with Peter’s Herbed Olive Oil and Cheese combination, creating a variety of great cheese breads, and “white” pizzas (no sauce). 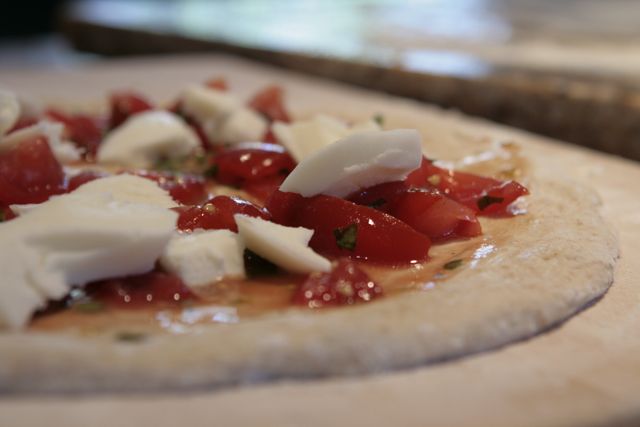 For this recent pizza session, I wanted to try to recreate one of Kelly Whitaker’s pizzas that he created for us using Bel Gioioso’s Fontina Cheese.  I’ll post that pictorial next time.  He added Prosciutto and sauteed mushrooms and used the juice of a fresh tomato bruschetta topping as the sauce, then topped it off with some fresh, wild arugula.  Sounds good, and it was!  Actually, everything Kelly made for us was off the charts amazing.

I made the bruschetta topping a few hours early so the flavors would become more and more blended as it sat, waiting for it’s supporting role.  As I was making the topping I realized I was looking at the basic ingredients of a Margherita Pizza (tomato, fresh basil – cheese to follow).  I decided that this would be my “left-overs pizza.”  I don’t know why, but I thought of it as an”Upside Down” Margherita.  I admit there is nothing upside down about it, but it’s my title and I’m sticking with it.  It’s memorable. 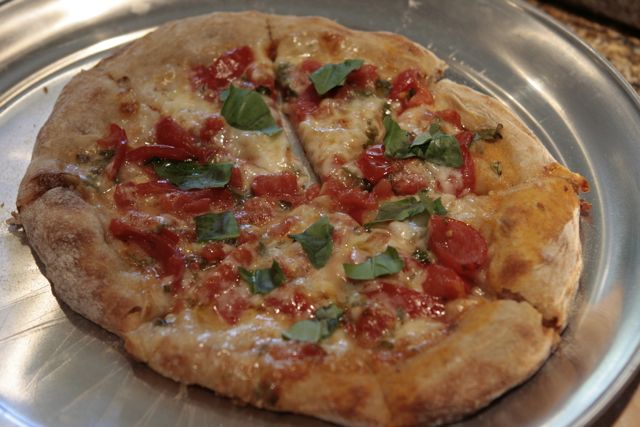 I made it in advance, again to let the flavors come together.  I’m sure you could play with this simple recipe and add all sorts of flavors – like a balsamic vinegar that would give it another layer of flavor.

“Upside Down” Margherita Pizza:
I used Peter’s Country Dough for this one (see the Instructional Section on this site).
fresh bruschetta topping
fresh mozzarella, about 2 or 3 ounces per pizza

The Oven–heated as high as it will go, with a pizza stone. 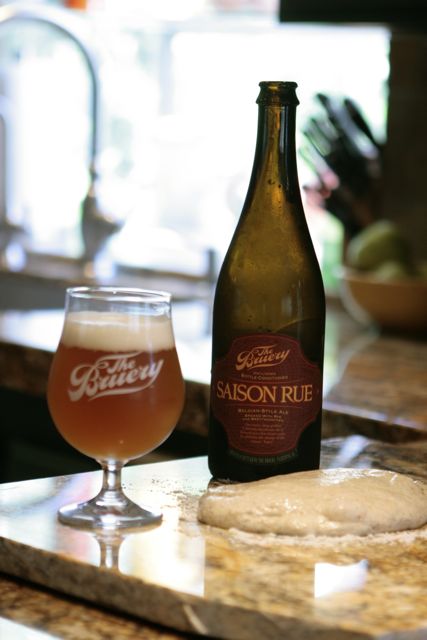 *The chef’s assistant pictured here is a beer from the artisan brewery called “The Bruery” The beer is called Saison Rue; Kelly Whitaker introduced it to me when we filmed with him back in October.  Kelly served it with a Sous Vide cooked Beef Short Rib that he finished in the wood burning oven to give it a more firm, slightly charred, crispy crust — wow! You’ll get to see that in the near future in an upcoming Instructional Video.  The Saison is an interesting French/Belgian style ale with a lot of character and depth that went terrifically with the rustic dough and fresh ingredients of this and the other pizzas I was making.

Nice looking pie there-love the fresh toppings-reminds me of summer!

Ahhhh Bruschetta. My Nana made the most incredible bruschetta. While in college, I figured that tomatoes and stale bread were in abundance so I asked her how she made her bruschetta. I cannot describe the look of confusion on her face.
Nana – “It’sa bread and tomato!!!”
Me – “I know, but what do you put in the tomato?”
Nana – “Nothing… justa tomato.”
Me – “Don’t you put oil on the tomatoes?”
Nana – “YES… it’sa tomato salad!!!”
Me – “Oh… okay. Garlic?”
Nana – “sure, you putta garlic.”
Me – “Anything else”
Nana – “Sure, you putta anything you want”

Suffice it to say, I have tried countless times but can’t find a Bruschetta like my Nana’s. But then again, that goes for everything she ever made.