When life gives you lemons the old adage suggests you make lemonade.  I love good lemonade.  It’s sweet, but it has to be tart!  When it’s perfect it balances on the edge between the two taste sensations. 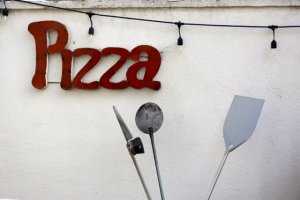 Well, today I asked for some lamb merguez sausage at the market and was instead given some pork chorizo sausage. What to do? What to do?!!

One thing was for sure, I wasn’t going to make a lamb merguez sausage pizza.  Life gave me chorizo instead.   One of the first things that comes to mind when I think of chorizo is eggs and breakfast burritos.  A pizza with runny eggs, cheese and some oily chorizo is simply delish!  But, that’s not what I was feeling. 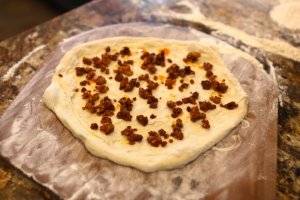 I still remember the first time I had this incredible side dish of burbling cheese with oozy chorizo oil and chorizo sausage. It was served in a little black cast iron pan hot out of the oven and it blew me away.

There’s a little Mexican joint in Santa Barbara called La Super-Rica that became known not only for it’s great street food, but also because Julia Child ate there often and sung it’s praises.  There is always a line out the door and down the street.  When you enter the building, you order right there in front of the small open busy kitchen, which is not much bigger than if it was in a food truck. 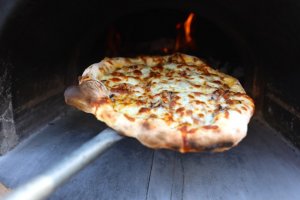 Numero Uno: Just like with a queso fundido, the cheese melts all over the top of the choirzo.

Their menu consists of small plates which lend themselves to group order and share.  No matter what we get, we order their version of queso fundido, which we enjoy in its cheesy goodness and slather on everyting.  “Fried” cheese with pork sausage is hard to beat as a combo, and just makes everything better.

So, there’s my inspiration! Let’s see what evolves when I take a happy accident and put together a pizza that celebrates this classic!  Queso Fundido is typically eaten as an appetizer on chips or, if you are lucky, with some fresh corn tortillas.  Why not on a wood fired pizza dough?

I placed the chorizo on the dough and covered it with the cheese mixture and slid this one into the oven.  When it came out, I finished it with cool fresh chopped heirloom tomatoes and cilantro.  The hot burbling “queso fundido” was topped with the cool tomatoes and cilantro which gave it a wonderful freshness when you bit into it.  It was almost like topping it with a fresh salsa or pico de gallo! 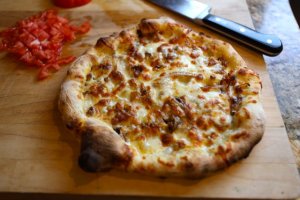 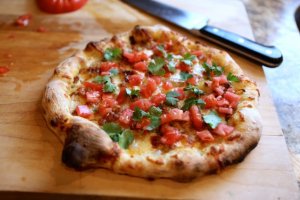 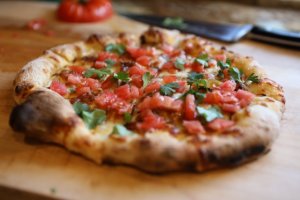 Cut and serve! The chopped tomatoes add a freshness to this pizza! 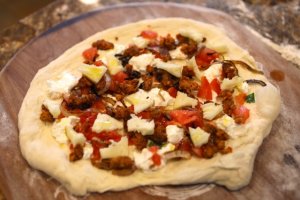 Numero Dos: For this one we went all in up front with the addition of a fresh burrata that turned out to be a winning combo!

I didn’t have the traditional cheese typically used in making Queso Fundido, but then again, I was making a pizza. The Havarti added a nice buttery flavor that worked well with the spicy chorizo and milkiness of the mozzarella.  I think a nice fontina, or gouda would have worked as well.

For the 2nd version, I used some of the burrata I had on hand to give this an even creamier texture.  For this one, everything went on the dough before going in the oven:  chorizo, burrata, havarti, and the chopped tomatoes.  After the bake, I added some more cool burrata cheese on top and the chopped cilantro and then drizzled some of my favorite chili oil (only because I didn’t have any more of the cooked chorizo juices).  OMG!  Talk about taking it up a notch!   This was amazing!  Not only was the cheese base creamier with the burrata, but the added burrata on top gave it another one of my favorite layers of flavor, cooler temperature, and texture. 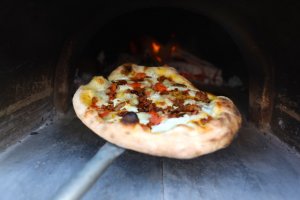 Numero Dos: This was the last pizza of the night. Call it a rustic shape, if you will, but don’t let that fool you as to how it tasted! 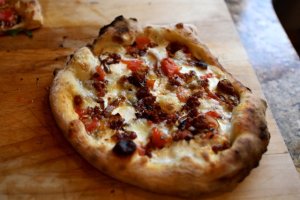 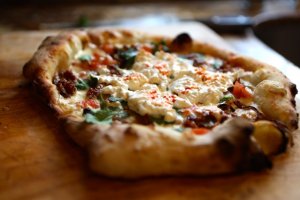 Life gave me chorizo.  I think I gave myself some pretty nice lemonade!