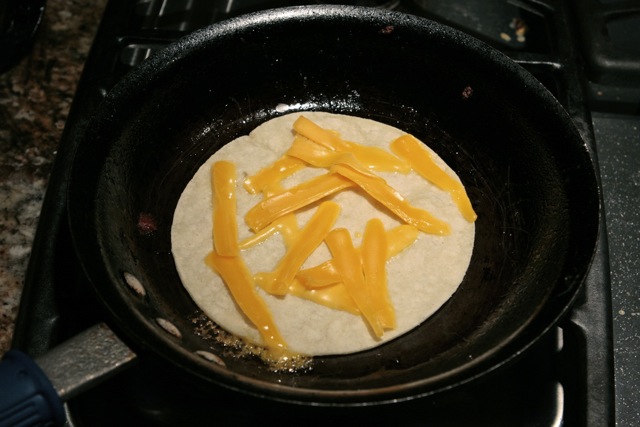 A little voice, in fact, a very persistent little voice is constantly calling out “Daddy, can you make me a quesadilla?”  Moments later the chorus continues and continues until I relent or take the dog on a walk.  This happens in the morning, after school, for dinner, or later in the night as a snack!  The result of these requests has meant that I spend a fair amount of time over my stove making up quesadillas for the kids (and others of us).  And, also the dog has gotten his fair share of walks. 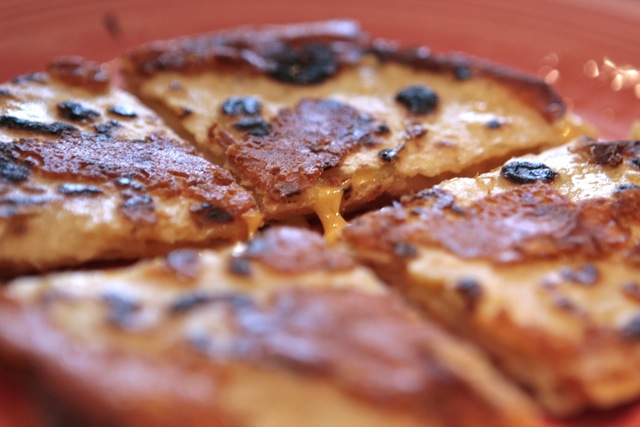 This is Pizza Quest, however, not Family Pet Quest – so let me focus on the mighty little quesadilla.  Sometimes, it can even be a mighty big quesadilla.  One of my favorite versions is a Breakfast Quesadilla, which is a cross between a breakfast sandwich and a breakfast pizza.  The dough, or tortilla is simply the delivery system.  Peter has often referred to pizza as dough with something on it, akin to a grilled cheese sandwich or any other product where dough serves as a host for a number of ingredients to make a tasty meal. The quesadilla, in my opinion, falls right in line with this concept.  It’s a dough and its main basic ingredient is cheese.  Who is going to argue this isn’t a pizza on some level?

Many great Mexican and Tex-Mex restaurants take that to a whole other level, offering a quesadilla as a meal with chicken, or as a full breakfast, or whatever they have come up with to enhance the basic cheese between two tortillas concept. 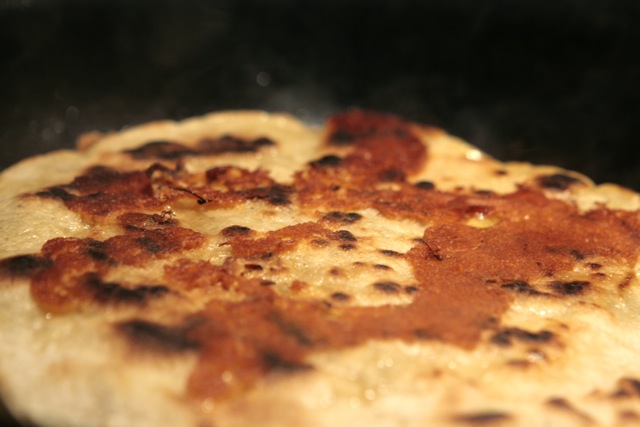 By adding the cheese under the quesadilla, you get another flavor profile and texture…

As I said, I have spent a good amount of time playing around with my versions here at home.  With my last name being English, these are now “officially” being called Quesadillas Ingles.  I never really thought about it much, it’s just cheese and a couple of tortillas heated up on the stove top but, after being “forced” to make these things over and over and having a few incidents where I might have a lucky accident, I began stretching the concept beyond slapping some cheese between two tortillas.  One of the first “accidents” I recall was noticing when a little cheese spilled out from between the tortillas and fried into a perfect crispness on the side.  I love that crunch!

Sorry for the digression, but, we have to take a short road trip up the coast.  If you live anywhere near Santa Barbara, CA, add a visit to La Superica Taqueria on Milpas Street to your list of must-do places.  You will always find a line out the door of this taqueria and you will see why after you go.  They have a side dish which is fried cheese with bits of bacon and onion.  It isn’t fried crisp, but has a bit of that flavor from the onion and bacon, and the edges can get a little crisp and charred.  You take this small bowl of pure perfection and add it to your tacos, or even to just a warm corn tortilla.  It is the only place where I’ve come across this treat and, living in Southern California with a great Mexican restaurant always around the corner, that’s pretty noteworthy.  I happened to be in the area this past weekend and took some photos that I’ll share soon. 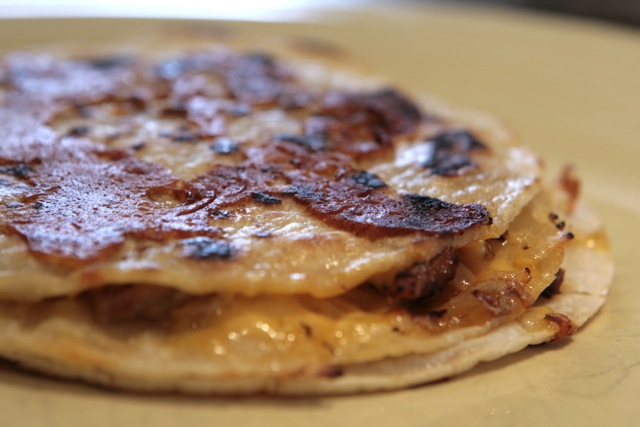 Ok, so back to Quesadillas Ingles. One day, I thought of double decking the little corn tortillas to make them more substantial.  I think I was trying to just make them a little bigger so that I would have to make fewer of them.  I like to use corn tortillas for these and they’re small and the kids are always calling out for more.  My daughter starts this pleading, usually, and then my son shows up and joins in.  Then I’m making these for two people and I’m inevitably cutting them up like small pizzas and stealing a wedge or two for myself before delivery.  Thus, the double-decker was born.

You can add all sorts of ingredients besides cheese to make these more of a meal.  I’ve added sauteed onions, Mom’s Pickled Jalapenos (see the Instructional archives for this recipe), chicken, and a mixture of cheeses.  You don’t add much, these are more like street tacos than over-filled restaurant tacos.  A little goes a long way. 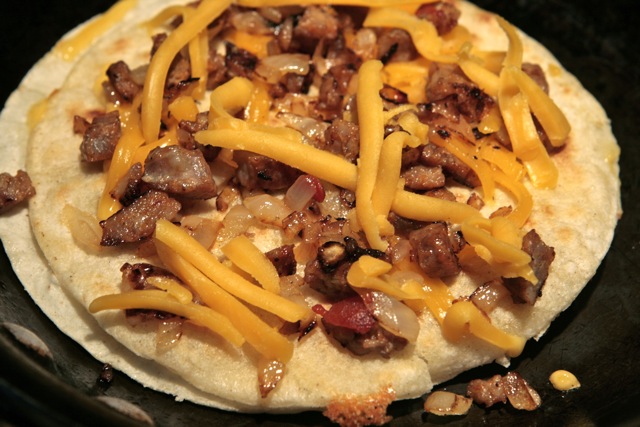 Add ingredients plus cheese on each layer to hold the tortillas together as it melts.

I made two versions here in these photos.  The first is a basic double-decker with cheddar cheese.  The second has some leftover spicy Italian sausage that I had used in a pasta dish the night before.  I chopped up the sausage, which I fished out of some great tomato sauce, and sauteed it with onions.  I added some new, freshly chopped onions and sauteed those until soft.  I then added this mixture with each cheese layer and suddenly had a nice spicy sausage pizza, er, I mean a double-decked Quesadilla Ingles with Spicy Sausage and Sauteed Onions. 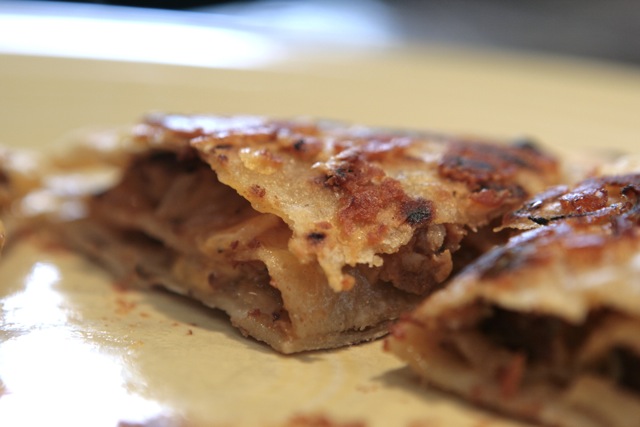 Peter always says that pizza is just dough with something on it. How about this spicy Italian sausage and onion quesapizza??

Options:
Add anything you can think of.
I have triple stacked these babies, but find a double stack holds up better and has the right balance of cheese and tortilla.  If you follow my technique you can get all three layers of tortillas  crispy, which is better than having a soft middle layer (in my humble opinion).

Set your dial to medium high; you may have to adjust.  This can be a smokey operation.  You want the heat to make things go quickly, to melt the cheese and give a little char on the tortilla, but it’s a bit of a dance, so be prepared to make adjustments as you learn.

Hit the pan with a little non-stick cooking spray.  This works best to make sure the cheese doesn’t stick.

Lay down your first tortilla.

Put your first layer of cheese on the tortilla and cover with a second tortilla.  Let this go until you get the bottom tortilla crisp before flipping.  What I’m trying to do here is get that 1st tortilla crisp because it will become the middle tortilla when you flip it over.  It adds another layer of crunch in the middle.  Trust me, it’s worth it.

Flip the tortilla over (after giving the top another spray so it won’t stick when you flip it over).

Now add your second layer of cheese on the charred bottom, which is now your top.  Add other toppings, or fillings if using with each cheese layer. Place the 3rd tortilla on top of that and hit that with some more spray. Allow the bottom one enough time to crisp and char to your liking.  You can flip them and check, and then flip them back as many times as you need to.  The cheese will be melted quickly enough, so you are just looking for the texture/crispy finish on the tortilla.

Flip it again onto the 3rd tortilla (the top) to finish.

After the last flip, allow the tortilla to cook a bit. Then, pick it up and throw a couple pieces of shredded cheese on the pan and place the tortilla back down on the cheese.  Add cooking spray if you think you need it so it won’t stick.  The cheese will fry/crisp quickly and stick to the tortilla.  Flip and repeat and you will have added a nice toasty crunchy cheese crust to your Quesadilla Ingles.

Enjoy! Then walk the dog….