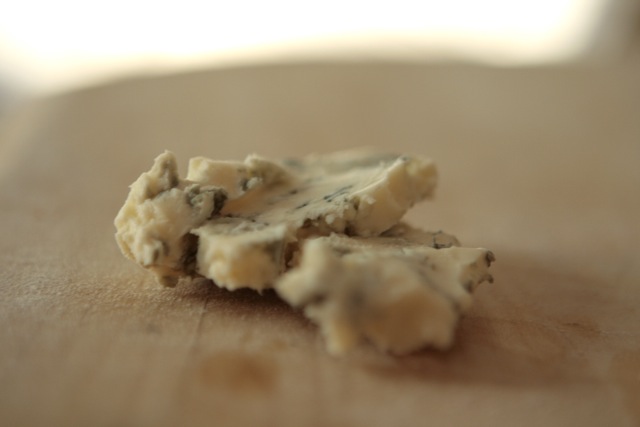 So, I had some Bel Gioioso Creamy Gorgonzola cheese in the fridge.  I wanted to make some pizzas. What came to mind was my friend’s grandfather.  I don’t know why, but often, when I cook it seems distant memories come flooding back to me.

My friend Brian had introduced me to his Nono (Grandfather) while we were back in college. As I sat there contemplating this Creamy-Gorg pizza, I got lost in the thought that if I had gotten the chance to make Nono this pizza, he would have said, “Atsa Creamy-Gorg a-peezz!”  Nono had a little shop in San Francisco where he repaired furniture for years and years and years after emigrating from Italia.  I had met Brian on my first day of college.  He’s Italian and Irish with bright red hair and his nickname, which is known to half the living universe, is “Flame!”  We became fast friends. To be clear, we weren’t particular fast — as in speedy — unless there was a last beer, or slice of pizza, or something we wanted across the room.  In that case, watch out!  I don’t know why this Creamy-Gorg Pizza brought up my memory of Brian’s grandfather.  But, it did.

One day, while visiting him in San Francisco, Brian was telling Nono about something we had done, or were intending to do.  He warned us from behind his waiving finger, “Atsa tha dange!”  What he meant was that it was dangerous.  What it’s meant to me is countless fond memories of that moment and a constant anchor that will instantly bring me back in time to those visits I made with Brian to his grandparent’s home in San Francisco.  He would always come back to school after a break with all kinds of salamis.  It was good to visit the source.  How popular do you think he was in a dorm? 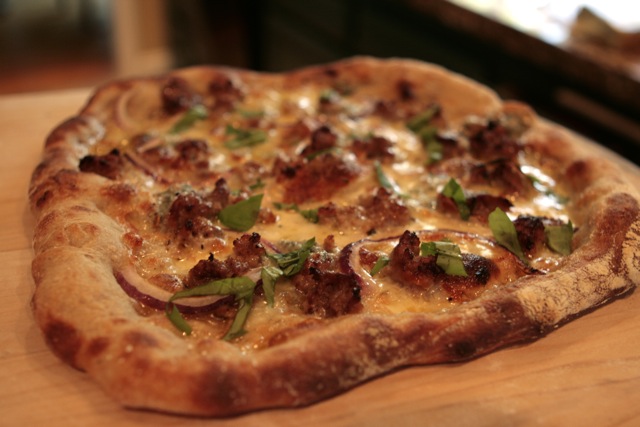 We had made a lot of dough to use during our last Pizza Quest filming, so I pulled out one of Peter’s Signature Bruery Challenge Pizza Doughs, which was made with Central Milling Company’s Organic Pizza Germania flour.  We’ll eventually post the recipe and show a video demo of how this is made.  But, so you know, I’ll tell you it has some beer malt in it.  And, it is delicious!

When I took out the cheese and took a bite, the very first thing I did — after thinking “Atsa tha peezz!” to myself again — was to go to the garage refrigerator and grab a beer.  This cheese and the smell of the dough, the loose flour, and fermenting yeast left me no choice.  I finished most of my beer while making this pizza, as I continued to swipe my finger through a chunk of the cheese I had laid out on the counter and take sample tastings every few minutes, and then followed each tasting with a swig from the bottle.  My mouth is watering now just thinking about it.

This “A-peezz” was rich with various flavors and paired really nicely with the New Belgium Skinny Dip that I had on hand.  I felt like I could almost smell the yeast fermentation that seemed to be shared between the beer and the dough.

I decided to let this Creamy-Gorg cheese be the accent on my pizza.  I laid down some mozzarella and other fresh ingredients, including a slightly spicy Italian sausage and some sliced red onions.  Following is my recipe and a few photos (as usual)! 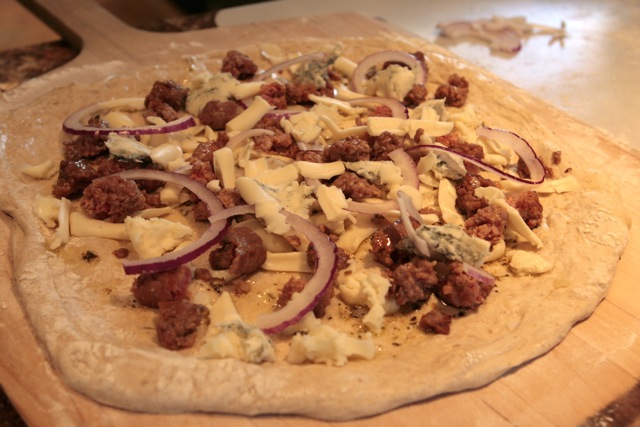 –Peter’s Signature Bruery Challenge Dough (as of now still a secret but you can use your own favorite dough)
–Peter’s Herb Oil (see Instructionals or also the Summer Caprese Pizza recipe)
–Thick grated Mozzarella
–Any Spicy Italian Sausage (The spiciness cuts through the rich flavor of the Gorg nicely), lightly sauteed but not fully cooked
–Bel Gioioso’s Creamy Gorgonzola cheese (or your favorite blue cheese)
–Sliced Red Onions
–Finish with some chopped fresh basil 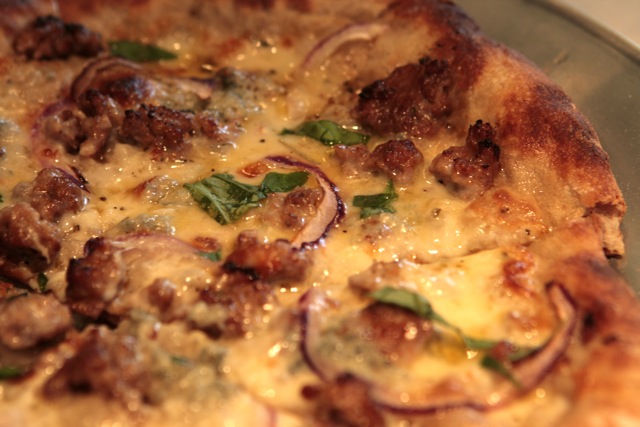 Spread some herb oil on the dough.
Add thick grated mozzarella
Add pre-sauteed sausage *Note don’t cook it all the way, it will finish in the oven
Add chunks of the Creamy-Gorg, not too much – it will spread out and wants to be a flavor surprise more than a base.
Add sliced red onions

Bake on your pre-heated pizza stone in a super hot oven, till done 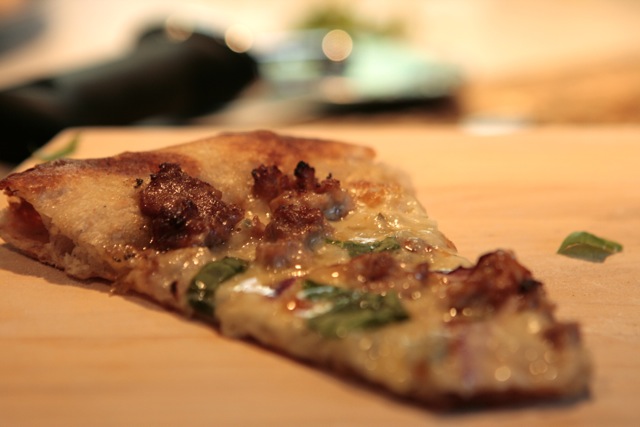 When it comes out of the oven, add some chopped fresh basil and serve.

My mouth continues to water as I write this.  Use this recipe as a starting point and let us know what you do that’s similar, or what you find to make it even better!  And don’t forget to give a toast to Nono!

I like the teaser on a secret dough recipe to come. My sister and I have had a lot of fun with a pear gorgonzola pizza. Sometimes just thinly sliced pear and a blend of Mozzarella and gorgonzola, and for something special we top that with mixed greens lightly tossed in blue cheese dressing and a few candied pecans. I know it sounds like too much but it doesn’t taste that way. TJ

TJ, can you send us a photo the next time you make one of these? It sounds great! Thanks!! Send it to Info@pizzaquest.com

Send us photos and the recipe and we’ll do up another recipe pictorial! Sounds great!