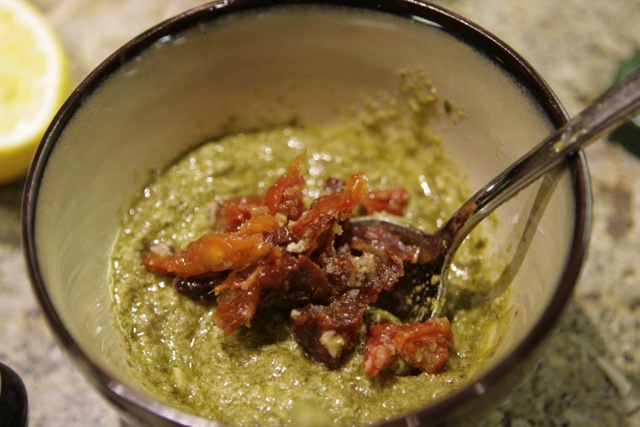 At first, we just thought of making a nice pesto with some fresh basil we had picked up…

When you do a pizza night, half the fun is coming up with the menu.  With the prep work that goes into making pizza, it just doesn’t make sense making one type of pizza for the night.  You usually have the idea pizza for the night and then you borrow ingredients, add others and come up with supporting pizzas for that particular event.

Our friends had us over and as you have hopefully read, they brought down some fresh seafood and some fresh ideas.  We made a Vietnamese inspired Banh Mi Pork Pizza and then moved on to use the freshly caught (or dug up) Coos Bay Empire Clams on a White Clam Pizza.  Both of these were delicious and I’d say the Bahn Mi Pizza was more like inspiring.  We weren’t done yet.  Knowing we had a good supply of clams, we planned on doing a couple of pizzas with the clams as well as a pasta dish for the evening. 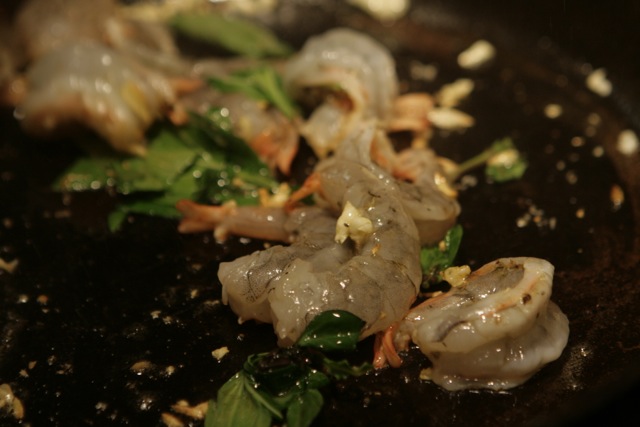 Saute up some shrimp in a little olive oil and garlic, but stop cooking before they are all of the way done. They will finish on the pizza in the oven.

For this second seafood pizza, we wanted to do something different than with the first which was a clean white sauce — herbed olive oil pizza.  What else would go well with the the clams and some other seafood?  Loan (pronounced Lan, who is our friend’s sister from Oregon who I would say has become our friend as well) suggested doing a fresh pesto.  Bam!  That pulled the idea together. The pesto sauce would be a nice adjustment while using some of the same ingredients.  As this pizza came together it continued to evolve as a work of performance art.  Our creative juices were flowing and I think we came up with a winner! 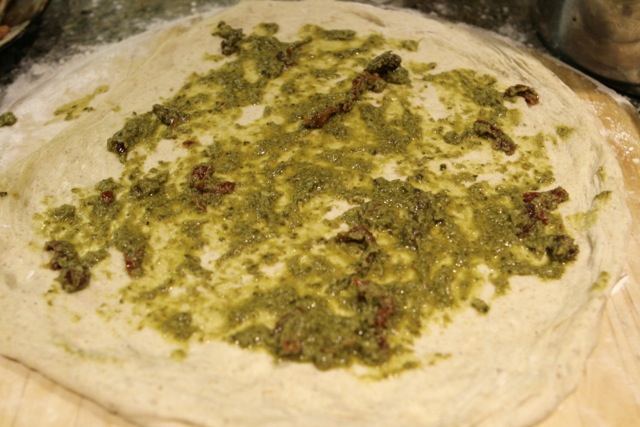 Spread the pesto with sun dried tomatoes on the pizza dough…

*Note from “American Pie” about selecting clams for this pizza: 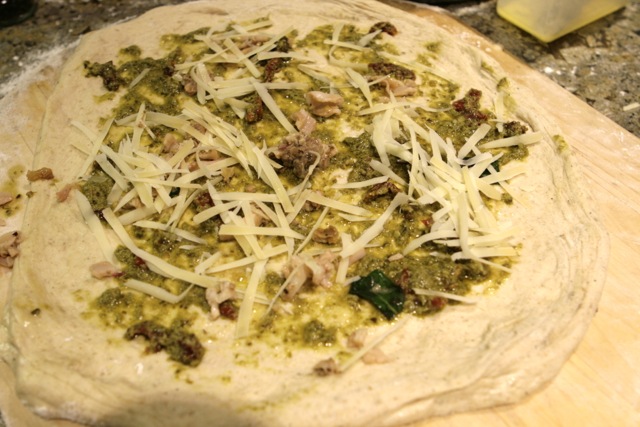 I added a little thick graded Parmigiano Reggiano and some of the raw clams.

“When making this pizza, look for freshly shucked medium-sized whole clams, such as manila, cherrystone, or littlenecks.  You can also shuck them yourself or steam them open.  An easier method, however, is to use either canned whole baby clams or another canned product called cocktail clams… (With these canned products, just drain the clams well…)  I do not suggest using chopped clams, even fresh ones, unless that is all you can find, as they tend to toughen during the bake.”  I can back this up. I have used whole baby clams on my pizzas ever since I got Peter’s book and have always had great results.

We were using these larger clams for this recipe, which had to be chopped.  They were hand picked, shucked and frozen by Loan and her family and brought down to us for this feast.  I did notice that some of the meat was tough, as Peter mentioned, but how do you not use the hand dug clams that came packed with passion and the sole purpose of becoming part of our meal?  I continue to reap the benefits of Loan’s generosity as she brings and even ships down fresh seafood that they caught up there.  One day, we’ll make the trip to visit them and join in on a crabbing trip, or clam dig on the beautiful beaches there.

As I mentioned, I have also used the canned baby clams for my pizzas and they always comes out perfect.

Some things to Prep: 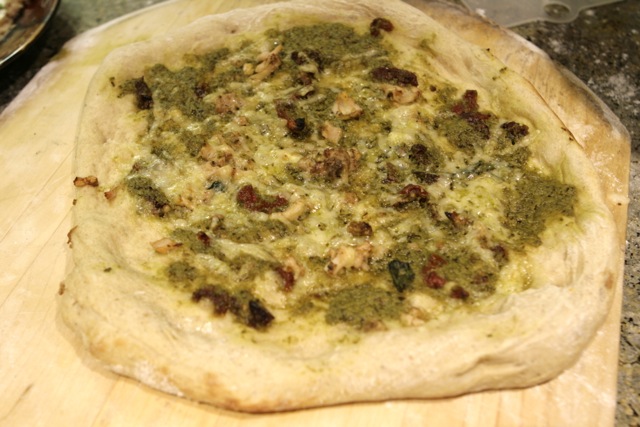 Bake the pizza for a few minutes (3-4) to set it up and allow you to control how much time the shrimp are in the oven.

Make up the Pesto *See Link above for recipe.  As our creative juices were flowing we rummaged through the fridge and found some marinaded sun dried tomatoes and added them to the pesto.

Saute the Shrimp in a hot skillet:

– Add a little olive oil to a hot skillet

– Add some chopped garlic and sauté until translucent

– Toss in the shrimp and season with a little salt/pepper

*Saute until almost cooked to allow the shrimp to finish cooking on the pizza. I cooked this pizza in two stages.  I placed the shrimp on at the second stage placing it in the oven to finish for about 3 minutes. 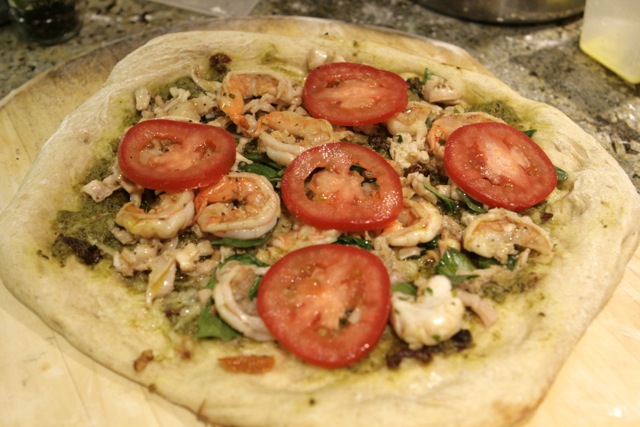 Place the cooked shrimp on the pizza and top with sliced tomatoes and a little more cheese.

Pre-heat your oven to the highest temperature (about 550 degrees) for at least an hour prior to baking your pizzas to make sure your pizza stone comes up to temperature.

Lay your dough out on the pizza peel.

Spread the Pesto with Sundried Tomatoes across the dough.

Toss the pizza in the oven for a few minutes.  The shrimp have been mostly cooked, so you don’t want to over cook them.  Allow the pizza to bake for about 4 Minutes and check it. 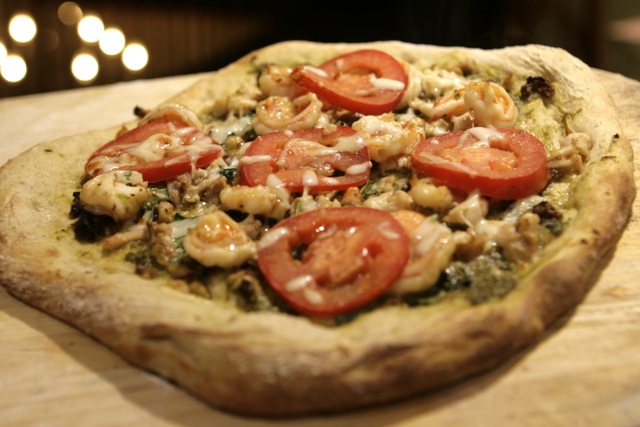 Keep an eye on this so you don’t overcook the shrimp. You just want to get the tomatoes to soften up and become moist and juicy.

Pull it out of the oven and add the rest of the pre-cooked Shrimp and add the sliced tomatoes on top.

Place it back in the oven to finish cooking (about another 3-5 minutes depending on your oven).

Remove from the oven and squeeze a little fresh lemon over the pizza cut and serve.

The pesto sets a nice base tone for the seafood to shine.  The addition of the sun dried tomatoes adds an intense burst of flavor while the thick sliced tomatoes are a nice juicy addition to the medley.  This is a totally 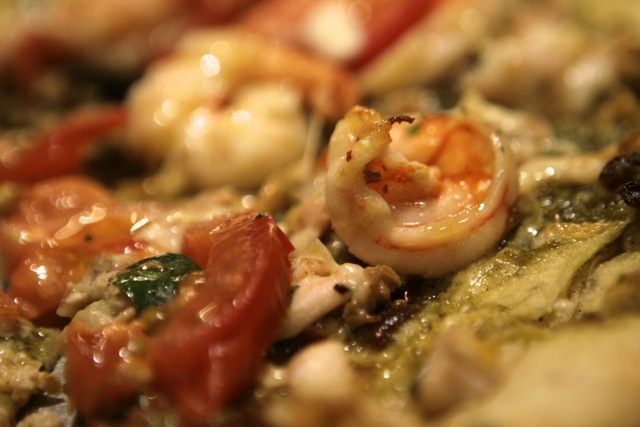 different experience than the previous clam pizza we made, which was more about the simplicity of the clams blended with a nice herb oil and a the cheeses.  This was a more robust statement playing on the earthy pesto and the rich sun dried tomatoes that all seemed to balance one another.

Another way to go with this same pizza, would be to make it “Al Diavlo”!  I almost can’t believe we didn’t do this!  Next time.  *If you’re ever in Vegas, check out John Arena’s Seafood Al Diavlo Pie at Metro Pizza.  I’ll have to get his recipe and try that one here sometime soon.

Ahhh, seafood. My absolute favorite food, next to spaghetti, is shrimp. This article reminded me of a biker show in the spring of this year that my husband and I sold our pizza at. In the evening, when the public left and the vendors were hanging around the fire getting hungry,they ordered a couple thin crust, white pizzas with shrimp on them, our first time putting shrimp on our pizza. I delivered them around 1am and sat with them at the fire eating one of the slices offered to me (loved it). Our white pizzas always have olive oil and chopped garlic with Italian seasoning and thinly sliced tomatoes on top. The owner of the venue said, “I want to throw it up so I can eat it all over again”! Gross, yes. But it was that good. The next rally is next weekend. I’m shopping for shrimp. And maybe some pesto???

That’s great! Send me some photos of your pizzas and the rally – maybe a story? I’ll publish your Shrimp “Rally” pizza for our viewers!