On Pizza and Beer

I was reading Part 4 of John Arena’s “Are You Ready to Turn Pro” series on our site and noticed an interesting comment from one of our readers, Kevin Szot.  Well, truth be told, it was interesting in that the commenter owned a micro-brewery in Chile and loves to make pizza!  I checked out his site and realized that he didn’t just love making pizza, but had really thought things through, even dedicating a section of his website to gourmet pairings featuring pizza. So, intrigued, I wrote to him.  After trading a few emails with Kevin, he sent us some additional thoughts on pizza and beer, which we are sharing with you below.

Peter and I think this is an interesting piece about two of our favorite subjects, especially in light of the great beer and cheese info contained in the recent Basta webisode we posted.  I am hoping to drag Kevin into another kind of beer and pizza collaboration, where the two of us do some recipe pairings over the internet in the coming months — maybe even featuring his beers.  Stay tuned and, in the meantime, enjoy this very informative Guest Column.  Thank you Kevin! (Note, Kevin’s website and e-address for Szot Microbrewery Chile are: 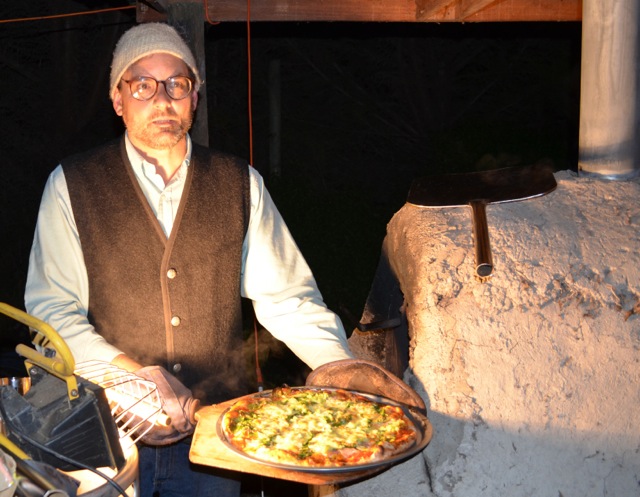 It looks to me that Kevin is having some fun in Chile!

Although we’re in the beer business (we own a microbrewery located near Santiago, Chile), we are also “homebrew” pizza fanatics.  My wife is a bread and cookie baker, so we have a bakery quality oven at home, plus we had an outside “barrel oven” (http://www.szot.cl/hornobarro.html) which we just destroyed to make way for a refractory brick pizza oven (work-in-progress).  Our home kitchen has even been approved by the local health authorities for commercial baking.  There is a bit of overlap between our beer and pizza since, in most of our doughs, we use beer where the recipe would normally call for water.  We also use a small percentage of freshly ground malted barley grains (either pilsen malt or crystal/caramel) in our dough.  We have tried the use of spent grains (leftovers from the beer making process) like some have recommend in the beer press, but these have already had most of their complex sugars, enzymes and flavor removed by the brewing “mash” process. We find it’s much better to use a small quantity of new ground fresh malt and just send the spent grains off to the cows. It’s easy to grind the dry barley malt in a home coffee grinder.  Barley adds a nice touch, plus has enzymes which probably have some effect on breaking down the starches in the wheat during the rise, but you have to be careful – too much barley makes the dough too sticky.  We tend to make our dough on the morning of “pizza night” or even the night before, to allow a nice rise or two.  In Chile we do not have the selection of flours that you have in the States, so we tend to use 50% common white bakers flour and 50% fresh ground whole wheat (no specifications).  We have no qualms about throwing in small quantities of other grains or seeds (sunflower, etc.) We are inspired by Italian pizza styles, but do not try to replicate them.  We do have locally made cow, goat and sheep cheeses.  There are no local blue-cheeses in Chile, though imported cheeses are easily available in supermarkets where the “gourmet” selection is actually quite good. Chile has a tradition of accompanying food with sauces, one of which is “pebre”.  Similar in concept to Mexican “pico de gallo” this can be made with big chunks of tomato, onion, cilantro, garlic, oil and vinegar (like a salad), or chopped up more finely, or even made almost liquid (like a sauce).  Nice topping, especially cold on top of a hot pizza right-out-of the oven. We start with simple “Margherita” type pizzas, then move up to more flavorful toppings as the night progresses.  “Empanadas” are big in Chile, the local way of making a beef and onion filling for them also makes a nice Chilean-style topping. We invite friends to bring their own special toppings (we give hints, like octopus, wild boar, imported cheeses etc.) and ask them to make their own pizzas (we do the dough and oven work).  That said, our favorite family pizza has a Thai inspired topping made of chicken sauteed with onion, then mixed with a peanut butter sauce cut with olive oil, and ample fresh-cut ginger, a bit of either mozzarella or blue cheese, no tomato.   Good pizza to finish the night and great with a high alcohol Barley Wine. 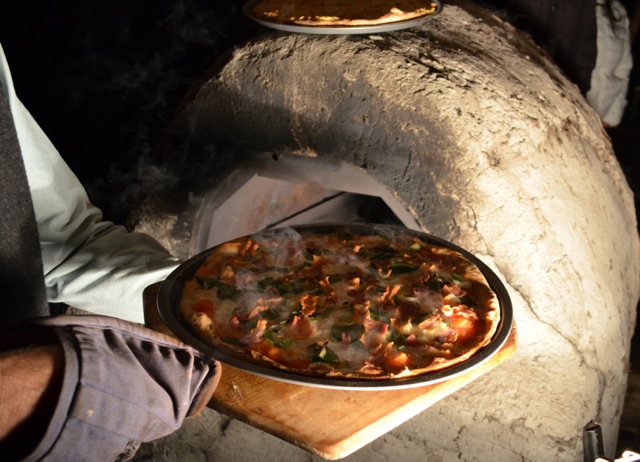 We need to find out if Szot’s beers are sold in the states!

Our style of pizza making has been driven by how we cook and eat them.  We are a family of six, so even if nobody else is invited, we each only get one or two slices per pizza.  With guests, we just cut more and smaller slices to go around!  So, we have lots of variety on pizza nights, but you only get a little of each.   Our dynamics of pizza making mean that we are rolling out the dough, putting on toppings, baking and eating simultaneously. It is quite a bit of work – and the oven must be watched very carefully.

Chile’s national drink is the “pisco sour”, a 35-45% alcohol distilled from grapes, then mixed with lime, crushed ice and lots of sugar (sort of like a caipirinha).  It’s great for receiving the guests as they arrive, but it is not for pairing with pizza.

Beer, however, does go well with pizza. It is really hard to go wrong!  However, I find that there are combinations that work better than others.  Same as we make a wide variety of pizzas at home, from simple mild-cheese to extremely spiced pizza bombs, there is probably a beer to best accompany each style.  The following are some generalizations based on my beer and pizza-making experience.  Please note that whenever we do pizza and beer pairings with a group, we are rarely in unanimous agreement as to the best matches.  Usually 60-80% of those participating are in agreement, but there is frequently a sub-group that thinks some other pairing worked better.  In fact, in most cases several beer styles will go well with any pizza.

We start our pizza sessions with simple, Margherita-inspired or similar pizzas. A Pale Ale tends to be a good match, but look for one that is not too sweet nor too hoppy.  You don’t want the beer to overpower the pizza.  Simple pizza, simple craft beer.  However, what brewers call “pale ale” is such a broad spectrum – you might want to buy a couple of different craft brands and try each with your pizzas. Generally the Pale Ales are the “jack of all trades” beers, they go well with any kind of pizza.  We have found that our Pale Ale goes well with ham, arugula, olive and parmesan cheese pizzas, all relatively mild ingredients:  It’s just that as the pizza session progresses, and you make more flavorful pizzas, with stronger ingredients, other beers will go better!   An alternative here would be a mild wheat-beer.  A fresh rosé wine offers a nice counterpoint to the beer if you intend to make several varieties of “simple pizzas” and wish to contrast barley and grape fermented beverages.

As you add tomato to the mix, I find the more amber and slightly hoppier beers make a better match.  The amber coloring comes from the use of caramel malts that leave a residual sweetness in the beer.  This balances well with the tomato flavors, kind of neutralizing any acidic components, while harmonizing with any sweetness that you may have in the sauce recipe.  This is especially true if you caramelize onions on a skillet prior to using them on the pizza.  Oregano tends to go well with these amber beers, same for salami and other cured meats.

Garlic can at times be overpowering, but we have discovered that one of our beers has an affinity for this flavor – our version of a “steam beer” inspired amber, but bitter, lager.  Also known as “California Common”, this style is exemplified by Anchor Steam in the USA.  Our version has a way of reducing the garlic flavor and allowing you to continue eating more garlic infused pizza!  This style also goes well with ceviche, white fish and California rolls. 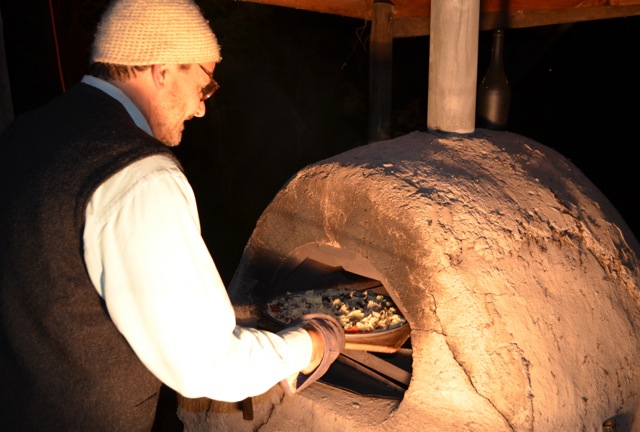 I’m curious to know more about this oven!

As your pizzas get more “flavorful”, you will need a stronger beer to keep up.  With the blue-cheeses a Scotch Ale, Barley Wine, Old Ale or Strong Ale is a nice alternative.  These tend to be sweeter, higher alcohol beers that clean the pallet of the overwhelming cheese or spice taste, allowing you to continue eating these heavy-duty pizzas.  In fact, sometimes the strong beer and cheese flavors meld so nicely that the end result is even better than each separately! They are made to be combined.  An alternative would be an IPA where the hops are predominant.  I find that both the alcoholic and the hoppy beers go well with strong pizzas – try both! In fact, an Imperial IPA (which is both alcoholic and hoppy) might be a nice choice. Complex pizzas require more complex beers!

Dark beers, such as porters and stouts go well with salty flavorings.  But here again there is a broad range of beer flavors, between dry and sweet stouts, and hopping levels.  It is difficult to generalize and simply say use a “stout”.  I find that our SZOT Stout balances a salty cheese or anchovy pizza, although a higher alcohol Barley Wine also does a nice job. Camembert type cheeses are another good match with the darker Stout beers.

Making pizza is quite a bit different from brewing beer, even though both “ferment”. Once the dough is ready, pizza is an almost instant gratification (however long you wait for the dough to rise, usually less than a day), whereas beer is not ready until several weeks later. Good combinations of beer and pizza will make both taste even better together than they do separately. Experiment!

Great piece! Thanks Brad for encouraging Kevin to share his story.

Thanks for sharing this Brad! As both a homebrewer and amateur pizzaiolo I love reading pieces like this. Garrett Oliver’s “The Brewmaster’s Table” is a great read on beer & food pairing if you’re interested in more ideas like Kevin is suggesting.