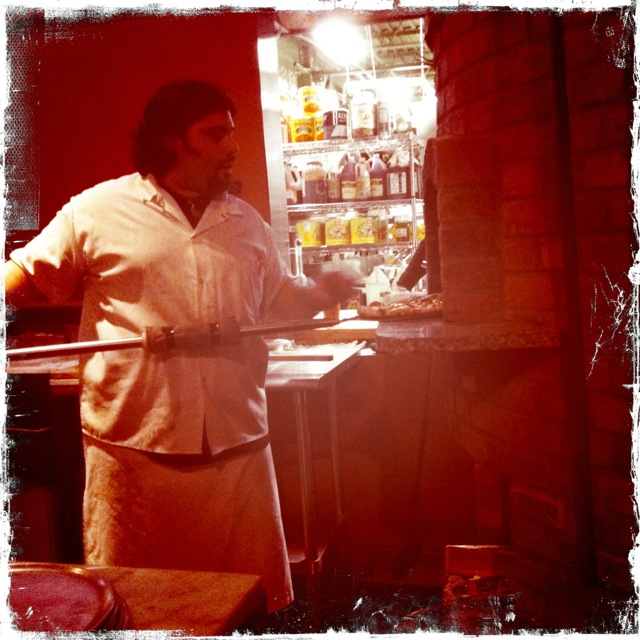 I was recently working back in NYC.  I had a number of pizza adventures on this short trip, which I started writing about a few weeks ago, and this pizza recipe is from one of the more interesting visits, which I haven’t written about.  I was staying with my good friend Holly, who is like a sister to me.  I grew up next door to her family, where her twin brother Billy and she quickly became my big sister and brother by proxy.  They were five years older than I was and helped “keep me in line” like I kept my younger brother and sisters in line!  Our two houses may as well have been connected by a hallway, that should have been built, to make the trip across the well worn path more hospitable during the cold winter months.  But, that would have ruined the Stoop-Ball court between the houses. 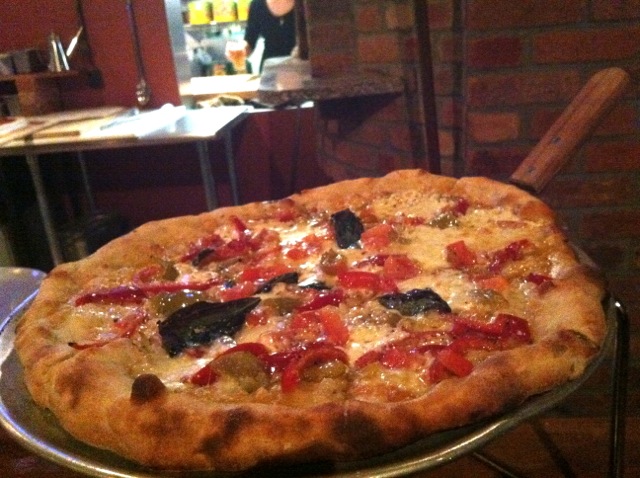 Biagio smacked me with my first Fat Lip!

Holly was dying to take me out for pizza.  I had just come from New York City where I had lunch at the new Don Antonio by Starita, where I met Roberto Caporuscio (who also owns Keste, one of my favorites), and had a truly unique new pizza for lunch and got to spend some time with Roberto and his daughter Giorgia back in the kitchen.  How can you follow that up?  I am never pizza’d out but I wasn’t currently in the mood.  Holly kept insisting we go try this new place.  I wasn’t really hungry and frankly, she isn’t a pizza fan.  A few days before, she boldly said to me that she wished I was on a Wine Quest instead of a Pizza Quest. What she didn’t realize, though, is that I was on one of those also.  The Quest is the “Quest”.  Period!  So, anyway, I was a little skeptical of getting dragged out to a Jersey shore pizzeria that night!  She insisted, though, wanting to show me this new place that wasn’t far from where we grew up over in Wall Township on Route 35. 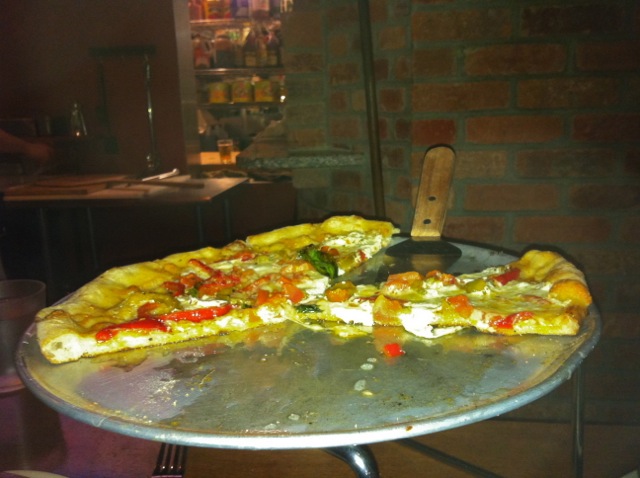 Holly and I did some damage to this Fat Lip. I don’t think we brough much home. And, let me add that Holly had a bit of a pizza awakening.

The place is called Mossuto’s Market.  It’s an Italian Market/Deli turned Market/Deli/Pizzeria/Restaurant.  I’ll tell you more about it all in a follow up article, or two.  But, what I want to tell you about now is the new pizza I ran into that night.  Its name is “The Fat Lip” and it’s a signature pizza of Biagio Schiano, who is one of the owner’s and head pizzaiolo at Mossuto’s.

After we ate (there’s lots more to tell about the part between when I arrived until after we ate, but that’s for another day) I asked Biagio, with whom I’d enjoyed a lot of conversation as we sat at the pizza bar near the wood burning oven, what type of peppers those were on the pizza.  He told me that they were actually a local product that he got from a guy who makes them from an old Italian family recipe.  He then said, “Oh, he’s right over there.  He the one who makes the peppers.” 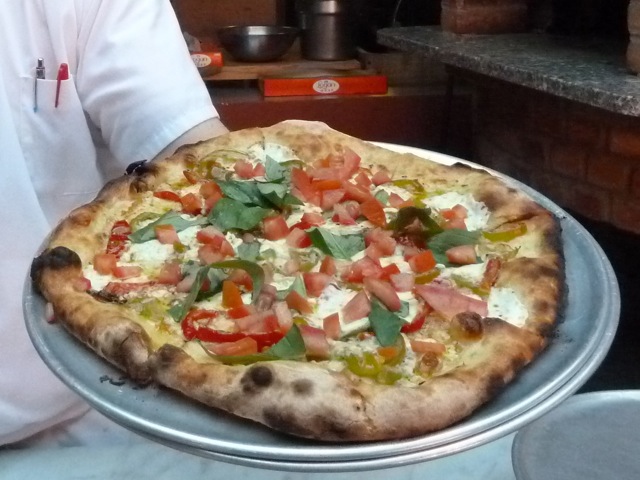 I swung by Mossuto’s the next day and missed Biagio. But, one of his pizzaiolo’s Sean took care of me and made up another Fat Lip for me to take better pictures of. Sean placed the tomatoes and basil on after cooking.

Let me again say, it was a very interesting night and I hope you’ll tune in to read all about it in the coming weeks.  But, for now, I’m going to share the recipe of my first attempt at making my own “Fat Lip” at home.  I couldn’t wait any longer because they gave me a jar of those peppers and I felt that they had sat in my cupboard too long (about 2 weeks — okay, that wasn’t really that long a time).  But, their pizza was so delicious and I had a hankering for some more and, hey, I had the peppers!

To make this pizza, first you have to make the sauce.  I’ll find out more about the peppers so you can find something similar and maybe even try to follow up with the owner and figure out how we can make something similar from scratch, like our Mom’s Soy Pickled Jalapenos (recipe link here), but for now, you may have to visit the source on Route 35 in Wall Township, N.J. – Mossuto’s Market.

*Note:  These peppers are pickled in Vinegar, Water, Oil with Garlic, and Salt and I see a little Dill floating in the juice.  They are sweet and a little spicy and certainly vinegary.  Delicious! 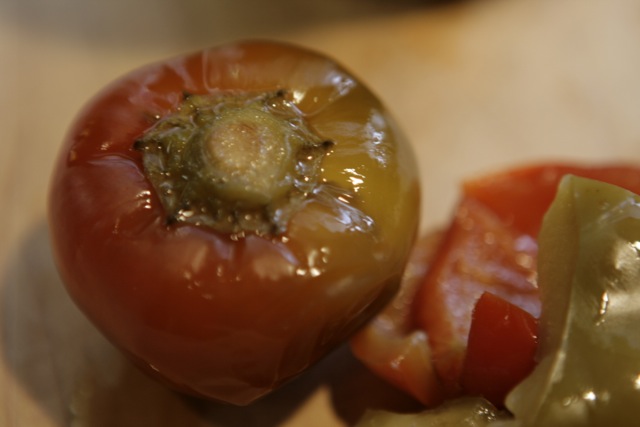 I have a limited supply of these. Next time, I’ll almost double the amount used. They are so good!

Sometimes you can read the ingredients in a recipe and know you don’t need the instructions.  This is one of those times.  Chop and combine and let your instinct (or your gut) guide you on the amounts.

Just to be formal about it though, here’s what you do:

Chop, or slice the peppers and place in a bowl.
Chop up garlic
Add Extra Virgin Olive Oil (add enough that you will create a sauce for drizzling)
Add a little of the pickling juice if you want (I do and I did!)
Add Oregano, Salt, Pepper and Chili Flakes, to taste 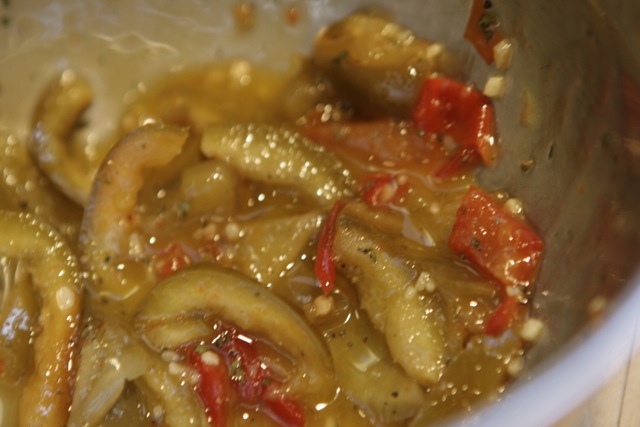 Mix up the pepper sauce and save in the fridge as long as you can.

Mix the ingredients and allow them to become one, with at least a little time. I imagine the more time you give them, the better.

When I sat with Sean, one of the pizzaiolos at Mossuto’s, the next morning he talked me through the process as he made up a batch.  This is definitely a place where the pizzas and ingredients are evolving.  As he made up a new batch of the peppers it was not by a recipe.  I could tell by his discussion that they were always playing with this and other things on their menu allowing a little fluctuation in the cooking process due to varying ingredients etc. 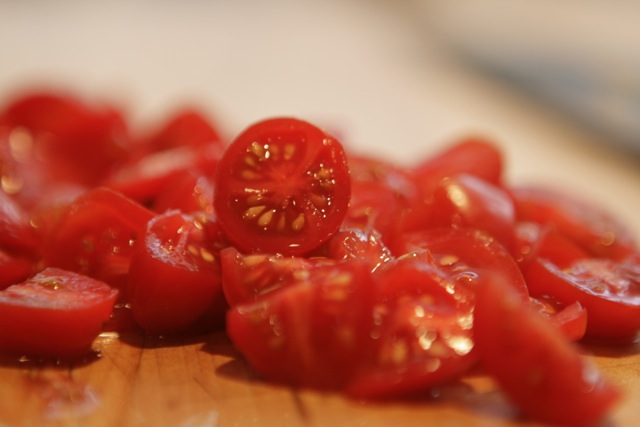 Use what’s fresh. I found some nice cherry tomatoes for my first Fat Lip.

– Your favorite Pizza Dough
*I used our Signature Bruery Dough.  *Click Here for Recipe
– Mossuto’s “Fat Lip” Finelli Pepper Sauce
– Fresh Mozzarella *About 70%
– Provolone Cheese *About 30%
*I used what I had on hand, which was a Bel Gioioso Italico Cheese that is a soft cheese with a nice earthy, almost nutty flavor – which added a little more depth to the pizza.  I used about 85/15 split of Mozz to Italico for this pizza.
– Chopped Cherry Tomatoes (or the freshest tomatoes you can find)
– Chopped Fresh Basil 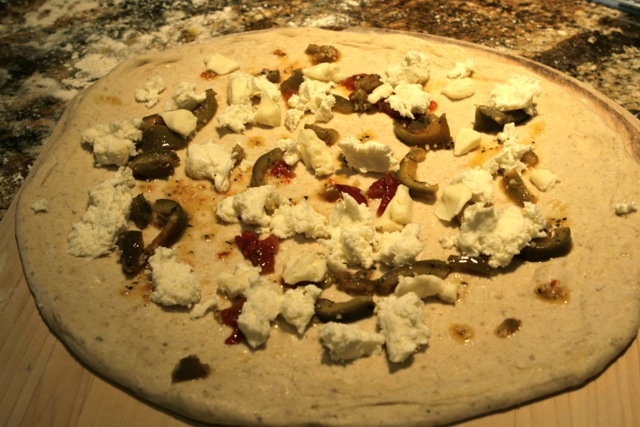 Spread the peppers and sauce around the dough and pinch off and arrange the chunks of the fresh mozz and the secondary cheese.

Spread your dough out on the peel.

Lay the peppers onto the dough and sprinkle the oil/sauce around the dough.
(It would look nice to just cover this with a lot of oil/sauce, but you don’t want the pizza to be too oily in the end.)

Add the cheese.  I pinched off pieces of the fresh mozz and then the Italico and spread them around the pie.

That’s it.  It goes into the oven now.

Pre-heat your oven, of course, to 550 degrees for at least an hour if using a pizza stone.
(I baked this for about 7 Minutes on my bottom stone and then moved it to the top stone for about a minute – just to try to give it a little more top heat to finish it off.) 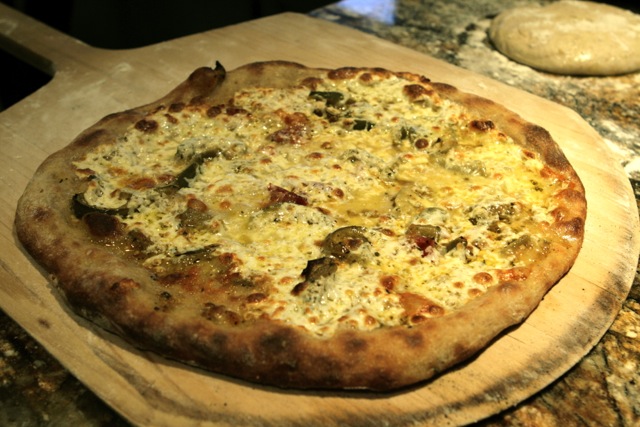 Word to your mother!

It comes out cheesy and gooey and blended with the peppers and sauce!  It looks good already!

This is my first attempt at the Mossuto’s Fat Lip Pizza at home.  My ingredients varied a little from theirs, but this turned out beautiful!y.  Look how fresh and tasty this thing looked.  I will have to follow up and find out more about these peppers as I quench my obsession.  They are a little spicy, but not too much.  They are vinegary, 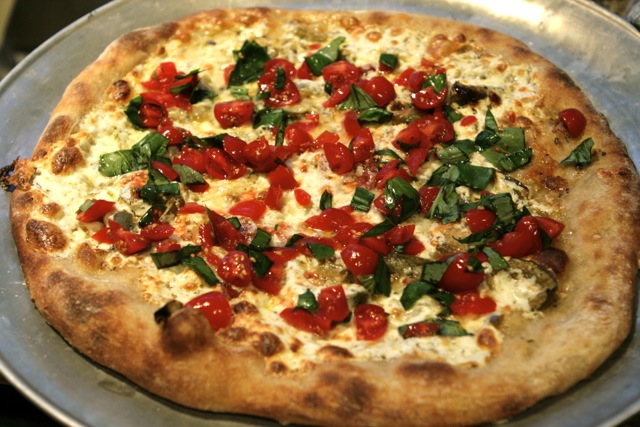 but not too much.  The sensation of biting through the warm crust on the bottom and the cooler tomatoes on top that sandwich the oozy melty cheese blend and the “zaazy” flavors of the Finelli Peppers and Sauce is like a symphony in your mouth.

I loved this pizza when I had it that night at Mossuto’s,  and again the next morning before my flight home to LA, and then again with my wife approximately two weeks later!  As you know, I like to brag when my family likes my pizzas, and my wife said this was one her favorite pizzas to date!  It’s a growing list, these ‘favorites,” and I’m happy to keep adding to it. 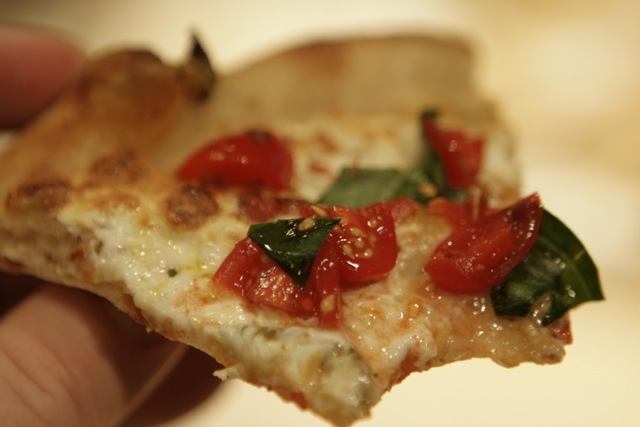 Not bad for a first run. It will only get better from here.

Let us know how you like it and good luck creating your own version.  If you’re ever in Wall Township, NJ stop in and try the original!  Tell Biagio I said hello and I’ll see him next time I’m in the area.  I will be writing up more of a story about my visit to Mossuto’s in the coming weeks.

Looks great! Any idea what type of peppers those are?

They are delicious peppers! A local guy makes them and sells them exclusively to Biagio! I have one jar and hope to get more and do up a story/follow up on these. They are amazing! This was one of my wife’s favorite pizzas that I’ve made at home. The peppers are a big part of that.