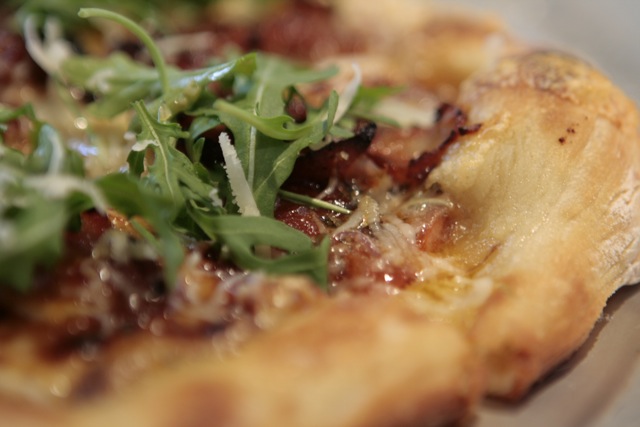 One of our Guest Columns by Tom Carrig was called “BBQ Pizza–Not”.  It got me thinking about, what else, barbecue pizza.  My first introduction to this type of pizza was back in the 90’s when the BBQ Chicken Pizza became all the rage at California Pizza Kitchen, and also at Louise’s Trattoria here in Los Angeles, CA.  We could talk a lot about this explosion of “new” pizza ingredients that really brought so many new pizza concepts to public attention, and I’m sure much has already been written about it.  I also understand Tom’s perspective about this abuse of the term “barbecue” and have learned over the years, as I’ve become more and more of a lover of “process” in my food quests, that barbecue, as a word, is butchered more than the butchers at national market chains carve up cuts of meat.  Wow, that was a mouthful of words even to type –hey Mom, I’m writing in metaphors and analogies now! 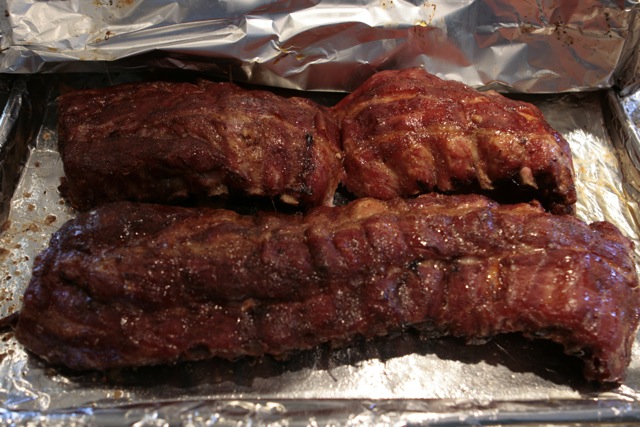 But, Tom really got me thinking about barbecue and pizza.  I’d love to try an official BARBECUED PIZZA (as he defined it), where all the ingredients are indeed touched by the fire, the smoke, and all that low and slow temperature and time.  It sounds like an adventure but would also require time, equipment, and expertise I’m not sure I have.  Maybe at a later date, though. For now, I need to satisfy my taste cravings in shorter order than that project would allow. But I did get an idea.

So, I emailed Peter and requested a jar of his next batch of “Pete and Sue’s Holy Smoke BBQ Sauce” (something he only gives out as gifts, and only to people he really likes, so I wasn’t sure if I’d qualify) And then I emailed him again, not long after, to harass him.  I had never come across a BBQ rib pizza before, but I was in the mood to do some ribs and I asked Peter to kick some ideas back and forth to help me create a BBQ Baby Back Rib Pizza. 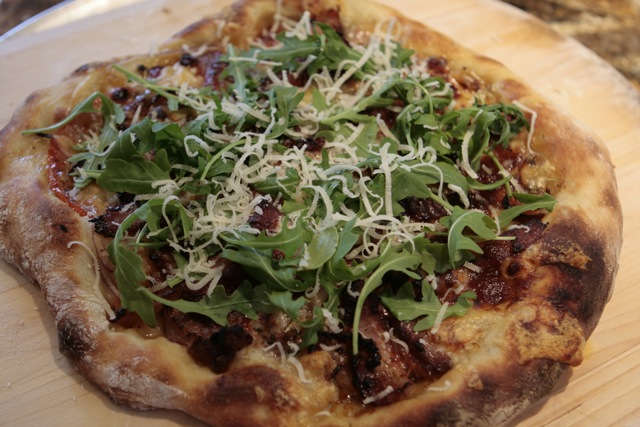 Now this isn’t a real barbecued pizza, in the full sense that Tom Carrig spoke, with all ingredients, even the crust, being slow cooked in a smoker.  What it is , though, is a really good Barbecued Baby Back Ribs on a Pizza – Pizza! Peter gave me some great ideas (and he did, in fact, send me a jar of his “Holy Smoke”), and here’s what I created.  My wife Shanna said this was her absolute favorite pizza of any I have ever made.  What can I say–it was really really really good! 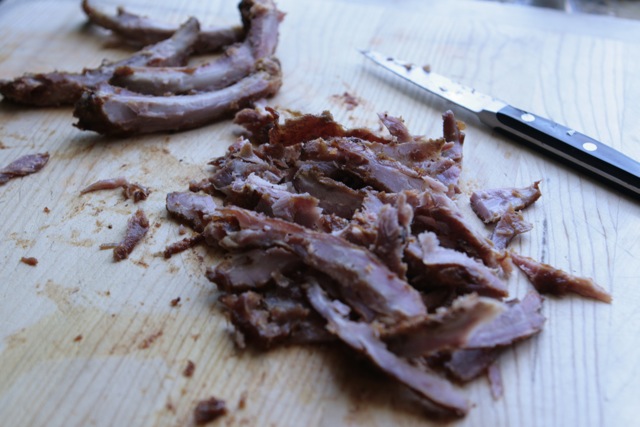 Left over ribs, cut off the bone into strips, which I tore into pieces to lay onto the pizza

Peter’s Classic Dough (see the Instructionals archive)
Thinly Sliced Red Onions
Sliced Tomatoes marinaded in Peter’s Herb Oil (again, check the archives)
Grated Provolone Cheese
Smoked – Barbecued Baby Back Ribs, (or Spare Ribs), cut off the bone and torn into strips
Pete and Sue’s Holy Smoke BBQ Sauce (sorry, but he made me tell you, do not to write to him for this — I’m working on him, though, to get this killer stuff bottled and into the Forno Bravo Products Store — so you’ll just have to use your own favorite sauce for now)
Fresh Wild Arugula
Grated Grano Padano cheese or your favorite dried cheese 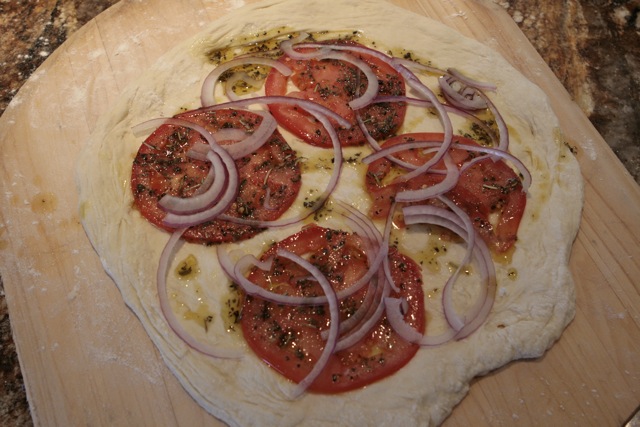 Left under the cheese, they almost steam and the cheese holds in the moisture

Build the pizza by placing tomatoes on the dough.  Drizzle additional herb oil on the dough, to taste.
Add the sliced red onions.
Add grated provolone cheese on top of the vegetables, to taste/texture you are looking for.
Add BBQ pork rib strips, or pieces, and drizzle a little more BBQ sauce over the top
(*Note:  My ribs already had sauce on them from the previous night’s dinner.  I will post the rib smoking photos in a separate instructional for those who are interested. If you can’t make your own, get some good ones from your favorite rib shack.)

Place the pizza into a pre-heated (550 Degree) oven on your (preheated) pizza stone.  Bake till done, probably about 7-10 minutes.

The smoked ribs, are now baked and slightly charred…

Remove pizza – Look at the slightly charred rib tips!  Remind you of bacon?!
Garnish with fresh wild arugula all over the top.
Grate some Grano Padano or any hard, aged cheese over the top.

Cut and dig in.

The suggestion that Peter had was to put the sliced tomatoes and onions under the cheese.  This kept them very moist and, when sandwiched between the warm dough and the cool greens on top, there was just a whole lot going on here.  He also suggested, originally, to put the arugula under the cheese.  But, by accident I forgot and ended up finishing the pizza with this large cool pile of organic greens.  This proved to be a great mistake on my part.  I loved how it contrasted with the warm, melted ingredients.  This pizza just worked!  Give it a shot, and let us know what you come up with. 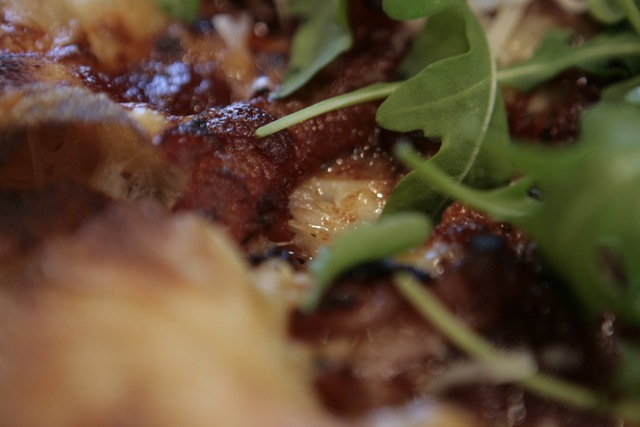 I’m sure this would also work well with grilled chicken in BBQ sauce instead of the ribs.  And, if you don’t have a smoker, then even doing your ribs in the oven would work as well.  You would miss that true smoke flavor, but I believe you can add some of it with a little liquid smoke (again with the heresy, but a guy has to do what a guy has to do to get his smoke fix; fortunately, in this instance, I had already slow-smoked my ribs the proper way but, if push came to shove, I’d do whatever it took to get some rib meat on top of another one of these pies!).

Don’t let Tom Carrig’s bizarre definition intimidate you. What you made IS a barbecue pizza and not merely pizza with barbecue ingredients. By Tom’s definition a bbq sandwich at Memphis’s finest joint isn’t bbq because the bread was made quickly in a hot oven. Or when Tom’s in Kansas City, it’s laughable to think that when he orders a sandwich at Gates, he says, “I want a piece of bread with pickles and bbq on it.” Those mean old servers would probably throw him out on his ear — they’re in too big a hurry to listen to someone make those sorts of fallacious distinctions.

I only have one quibble. Arugula, imho, disqualifies this as bbq. It needs to be topped with coleslaw. Only sissies eat a green leaf salad with their bbq!

Jim,
I wasn’t really intimidated by Tom’s article, it just got me thinking. I thought it was an interesting perspective, but that wasn’t going to stop me from playing with those ribs!

Don’t knock the Arugula! It was great. But, I do really like your suggestion about the cole slaw. I’ll have to give that a shot next time.