Of all the controversies in the world, the one that makes the least sense to me is that of how to properly eat pizza. Not a week goes by without a tour guest asking my opinion on the subject, citing alleged faux pas by public figures like Donald Trump and Bill Deblasio. They clearly expect me to react like Jon Stewart, with complete disgust for any method requiring utensils other than those built into the ends of the arms. This much could be expected from a typical New Yorker, but I consider myself more of a global pizza lover. That’s why it drives me nuts when people expect that there’s a right and wrong way to consume their pizza. 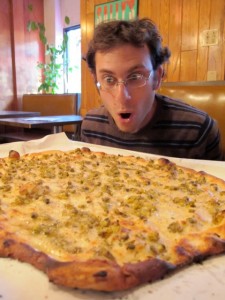 Scott, pondering the mysteries of the universe over a Frank Pepe’s White Clam Pizza

Think about what made you love pizza in the first place. It probably wasn’t your respect for old traditions, your fascination with the fermentation process, or your interest in perfect cheese application. You fell in love with pizza because you don’t have to worry about any of those things in order to enjoy it. You can eat it in a nice restaurant just as easily as you can while sitting on your couch wearing sweatpants. If pizza is the ultimate casual food, why does it matter how you eat it? He who thinks there’s a right and wrong way to eat pizza doesn’t really understand the inherent beauty of pizza in the first place.

Some people think it’s only proper to eat pizza with a knife and fork because “that’s the way they do it in Italy.” It’s great to respect cultural traditions, but this one’s not entirely accurate. Italy is a big place and people certainly don’t eat it the same way across from one region to the next. Even in pizza’s birthplace of Naples you’ll find several accepted methods of consumption. Some Neapolitans cut the pizza into slices that can be picked up and eaten one at a time. Others approach the entire pizza with fork and knife, cutting and eating bite by bite.

However, if we look back at pizza’s historical origin, it’s clear that utensils were never part of the plan. The poor lazzeroni of Naples ate pizza with their hands because they couldn’t afford any other way. Those who couldn’t afford an entire pizza could pay for a single slice. It wasn’t until pizza reached mass appeal after WWII that regional and cultural variation created new contexts for it. As the food changed, so too did methods for consuming it.

Let’s take this controversy one step further and investigate the New York obsession with folding slices. New York slices are big, thin, and often eaten on the go. The easiest way to manage these characteristics is to fold the slice in half. It’s about architecture, not tradition or authenticity. Pizza in the Midwest is often thick enough that it retains its structural integrity while being eaten with the hands. Those who have never had to fold a slice in order to safely eat it, as we do in New York, are often taken aback by the mere idea of doing so – until they are confronted with a situation that requires it. Again, function follows form. 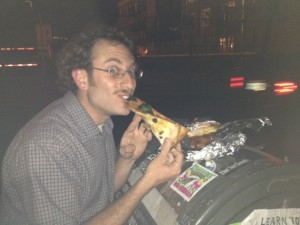 There are no global rules for pizza. It can be any shape, any size, any toppings, and any bake method. I’m not personally into dipping my pizza in ranch dressing, but I support your right to do so. If someone’s bullying you because of the way you eat your pizza, kindly remind them that pizza has no rules. Rules are for foods that would rather stand still than adapt. Rules are for foods that feel the need to be exclusive. Pizza is inclusive and constantly adapting. That’s why we love it so much! 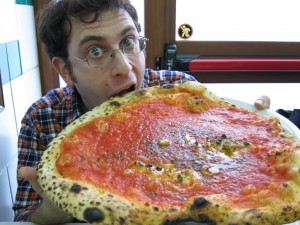 “No one gets to tell me how to eat my pizza!”