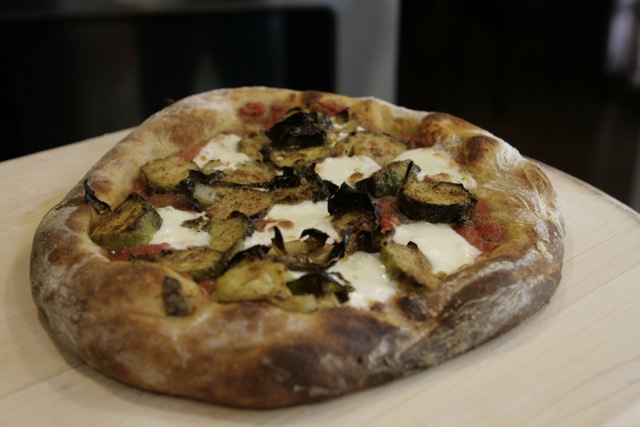 Not your standard pepperoni pizza!

You may think I’ve gone off the rails here with my pepperoni-ing of everything, but realize this isn’t all I eat!  I sit around and come up with an idea and make a bunch of pizzas to try something out.  As you can see from the last few weeks, it takes some time to get these postings together.  It doesn’t take nearly the time to make and devour the actual pizzas!

I have always been a fan of Brussel Sprouts.  Fortunately, these strange tasting little bulbs have become quite popular lately.  I was at Momofuku Noodle Bar in New York not long ago and had some amazing Brussel Sprouts and also swung through Boulder recently and had an amazing pizza that Kelly Whitaker adorned with clusters of brussels as a topping.  My favorite way to eat them is roasted with some olive oil, salt and pepper and then, sometimes, slicing them in half and finishing them in a pan with some shallots and pancetta.  There are tons of great recipes out there for these babies. 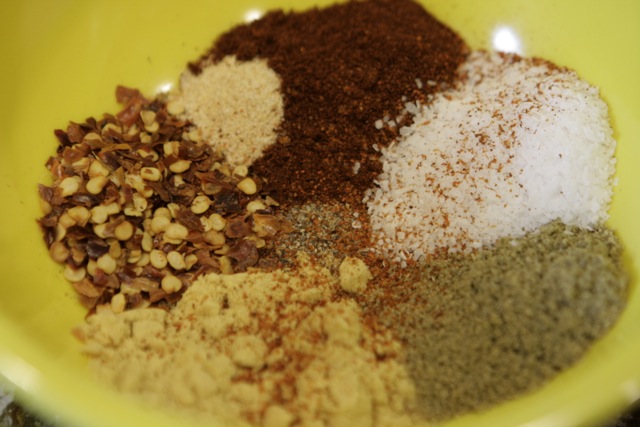 It’s all in the seasoning…

While I was thinking of my pepperon-ification of everything, Kelly’s pizza popped into my mind.  What if I roasted them 80% of the way and then sliced them into thick discs and seasoned them to taste a bit like pepperoni?  That could be interesting.  There is a little bite in a brussel.  That slight bitterness may be interesting with the spicy pepperoni flavors.

I looked up Momofuku Roasted Brussels Sprouts and found this recipe online – which I will now have to try!  Of course David Chang uses fish sauce which adds such an amazing flavor to almost everything.  My friend Kim, who runs my favorite home kitchen (I’ve featured her here, along with her mom, making “Mom’s Soy Pickled Jalapeños” along with her sister, who came down to help us make some amazing Vietnamese inspired pizzas) says she adds fish sauce to almost everything.  “It just intensifies the flavors and tastes so good!”  When I made my first pepperoni vegetable with broccoli stalks, I used a liquid pepperoni sauce that used fish sauce and it came out great.  But, lately I have just been using dry ingredients because some of my family don’t like that flavor as much.

Here is the link the the recipe for the Momofuku Roasted Brussels on a food blog called Food52:  *LINK

I would recommend blending this or maybe sprinkling some fish sauce into my brussels-pepperoni sprouts as an option! 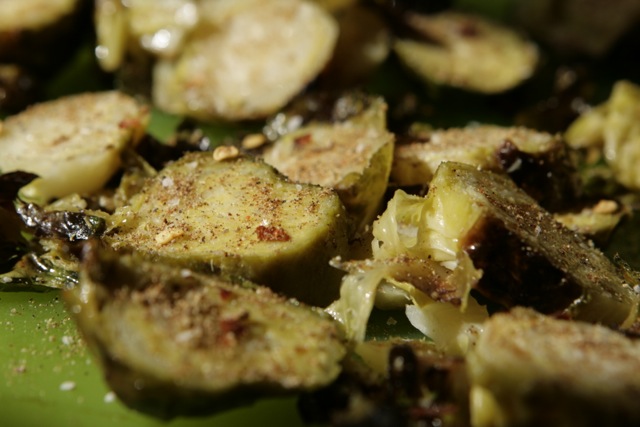 Slice the brussels and sprinkle with seasoning. Drizzle a little fish sauce as an option.

*I made up my “desert dough” with 10% Fire Roasted Mesquite Flour!  *Link

*I had a #10 Can of Bianco Dinapoli Tomatoes and I wasn’t afraid to use it! 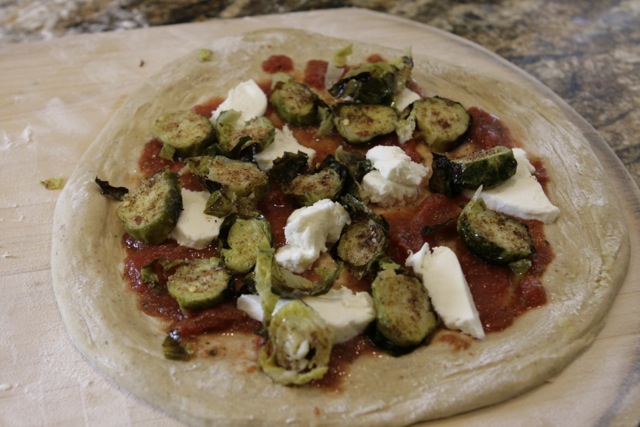 Right before the oven…

Roast your brussels.  Clean off any dirty tips and wash the brussel bulbs.  Place them in a bowl and drizzle some olive oil over them and sprinkle with salt and pepper.  Place them into the oven to roast until just done, or maybe just a little underdone – so you can cut them into slices and have them hold together.  Most recipes call for about 30-40 minutes in an oven at 400 degrees.  But, I had my oven cranked to 550, so I checked them at 20 minutes and pulled them a little bit after that when the tips were turning brown and they were soft enough.  You could do this earlier as well and let them cool.  Mine were still hot when I was cutting them, which makes that dance a little more entertaining for your fingers.

After slicing them up, sprinkle them with your pepperoni seasoning. 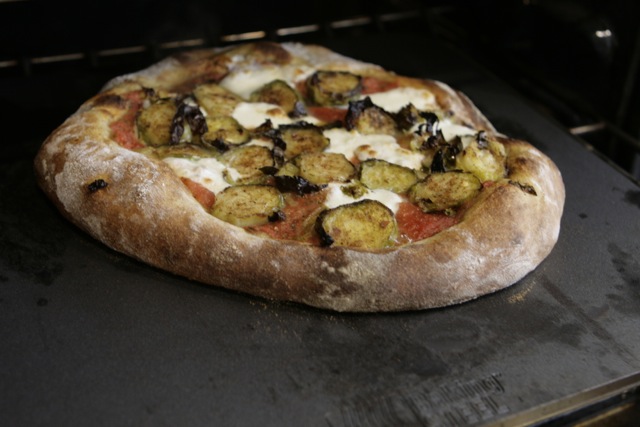 This is where I started.  After I mixed it up, I added a little more paprika and played with it a little.  My next run with the Brussel Sprouts will see some fish sauce added into the mix.

Season the sprouts on both sides! 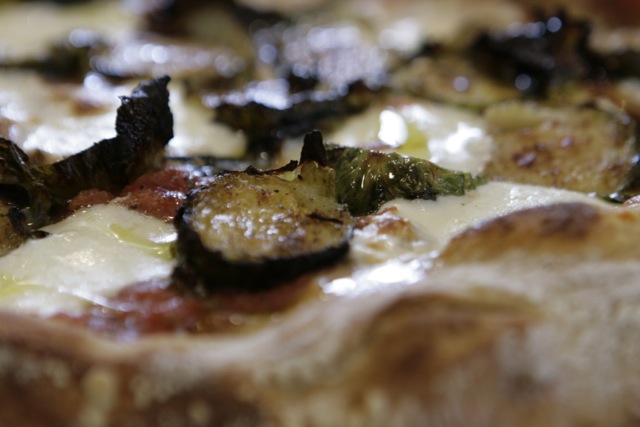 Drizzle with a little olive oil to finish.

– Place some of your fresh mozzarella around the pizza

– Lay out your sprouts

So, here we go into the oven.  In these photos you will see a new item in my oven.  I recently acquired a new pizza cooking surface – called The Baking Steel.  I’ve been using this for the past few pizza making sessions in my oven set up.  I’ve placed this in the center of my oven and used my thick Forno Bravo Pizza Stone on top of this because I like the idea that the heat retained in the top stone would radiate back down onto my pizza.  (My other theory is that having a couple stones in the oven, helps maintain the temperature when making multiple pizzas.  You can also rotate which stone you use as the pizzas take heat out of one stone you can cook the next one on the other stone etc.) 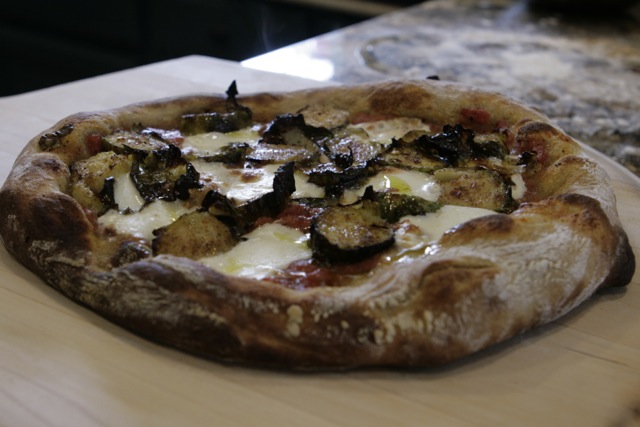 You know that looks good!

Anyway, there’s something interesting going on here with this Baking Steel product.  I’m getting 6 minute pizzas consistently.  My stone-only set-up may come close to that for the first pizza, but usually is in the 8-9 minute range.  There seems to be a very good heat distribution going on with the steel.

The other nice thing is that it comes with a carrying case and since it’s steel, it’s easily transported without fear of it cracking.  I’m still a huge fan of my thick stone, but this new product is a great addition to the potential tools we have for cooking pizza in our home ovens! 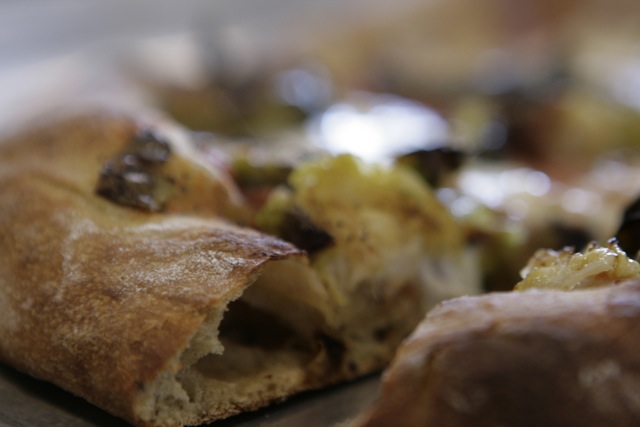 Nice puffed crust and you wouldn’t believe how velvety this dough is!

I pulled the pizza and steel out on the rack to take a picture of the pizza before it came out of the oven.  Looks great!  Nice crust.  If you haven’t tried this “desert pizza crust” I came up with, I highly recommend it.  The mesquite flour makes the whole dough smooth and almost velvety.  Very interesting.

Look at this oozy pile of brussels-eroni and melted fresh mozz swimming in a sea of Bianco Dinapoli goodness.  I’d call this pizza a success.  Give it a whirl and let us know how it comes out for you.

This is on my list to try! Love this blog! Thanks for the inspiration.