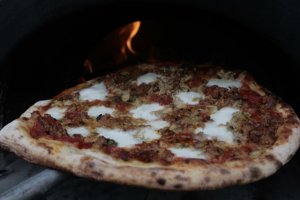 I was in the mood for a sausage pizza with milky fresh mozzarella. It would be too easy to just fire up the sausage in the oven and plop it down on the pizza and call it a day. This is Pizza Quest after all! I wanted to do something different – not just a pizza with sausage but a really good pizza that was about sausage.

As you hopefully have seen on previous recipe posts of mine, I precook my sausage out of the casing, pinching off bite-size pieces and pre-cooking them in the WFO as it is heating up to pizza time. I almost always toss in some chopped onions, and maybe add some tomatoes, chile peppers, or whatever I have around that makes sense, and then pour some beer over it to sort of baste it and give the sausage more complexity. This is a great way to do sausage. You cook it until just barely done so it will finish on the pizza later and not be overdone. 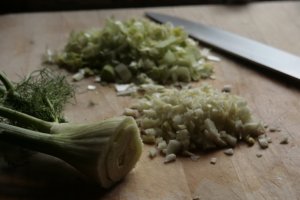 The flavors that the fennel, leek, garlic, fire roasted tomato pizza sauce and beer added to the already delicious sausage was amazing!

A few recipes popped up featuring steamed clams with fennel and sausage. What a great combo that is, with the sausage adding flavor pops to the briny seafood broth and aromas of the fennel. 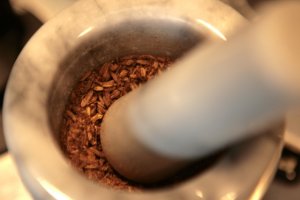 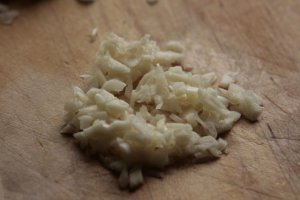 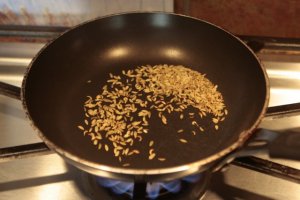 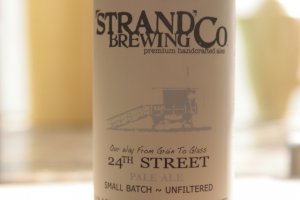 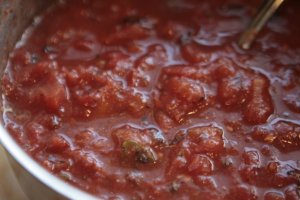 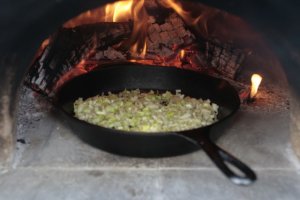 But, this pizza was about sausage and it would become my South Bay Sausage Pizza because I was localizing it as a coastal pizza by adding the clams. 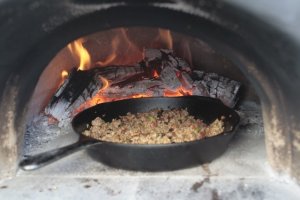 Once the herbs are ready, mix in the sausage…

I went to the Italian market/deli, Giulliano’s in Torrance, CA, where I picked up some of their house made spicy Italian sausages. These are delicious as they are, but I had other plans. I added some chopped up fennel bulb, sliced leek, chopped garlic, a good pour of a local beer from The Strand Brewery here in the South Bay, and some of my trusty DiNapoli Fire Roasted tomato sauce that I previously had made up for the pizzas.

Finally, pour in some beer and tomato sauce and mix it all together.

Let me just say that this is my all time favorite sausage mixture and, as you can see by the title, I’m naming it my South Bay Sausage, which incidentally led to the following pizza combination getting the same name. It is amazing how that works!

*Note: I ran out of time shopping and didn’t get down the my favorite fresh fish market at the harbor, and ended up using some canned baby clams for this recipe, which is still great, but not quite as fun as steaming the live ones open. 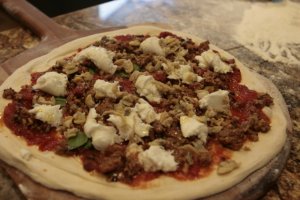 I used two cans of DiNapoli Fire Roasted tomatoes. These are really delicious on their own, but I added a touch of a few things to create the pizza sauce: about a tablespoon of dried oregano and basil, some chopped fresh basil, some garlic powder, pepper, and finally just a little bit of salt. Set aside to use for the sausage mixture and pizza. Hand crush the tomatoes to break them up a bit more, leaving some chunks of tomatoes. 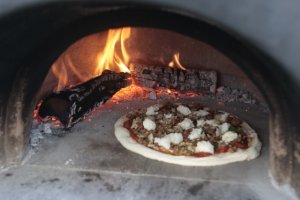 I used 4 sausages, which was more than enough for a few pizzas. (I had a good amount of left-over sausage and clams that my son and I tossed in with some pasta the next day for a fantastic lunch!)

– Chop up a small bulb of fennel – about 1 cup.
– Slice and roughly chop 1 leek – maybe 2.
– Chop up 2 large garlic cloves.
– Toast 1 tbs. of fennel seeds – mash up roughly in a mortar-pestle.
– Add crushed fennel seeds to sausage and mix together.
– Toss the fennel, leek and garlic into a cast iron pan and slide it into the oven while it’s heating up.
(Saute’ until soft is what they usually say. I say, let it rip to get some good char on things.)
– Add sausage to the pan and mix in the fennel/leek/garlic mixture.
– Let sausage start to brown a bit and then add a some beer which will pull the ingredients together.
– Finally add some of the DiNapoli Fire Roasted tomato sauce for more juiciness and flavor. 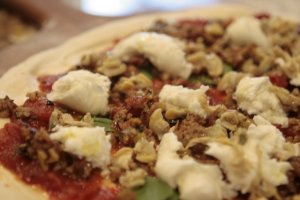 * If I was using live littleneck clams, I would put them into the sausage mixture at this point and maybe add a little more beer and, or tomatoes to help them steam open.

Cook this until “just” done. It will cook further when we put it on the pizza. 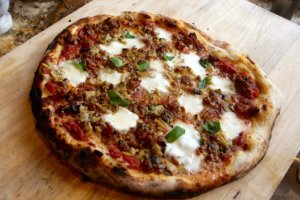 – Shape the dough.
– Add sauce to your desired thickness
– Add a nice layer of the sausage mixture
– I added some torn basil next, which will steam under the cheese giving another layer of flavor/aromas.
– Add some of the fresh mozzarella.
– Top with the baby clams — I wanted these to cook up fast and char up a bit as they cooked so I put them on top.
Into the oven.

When it comes out:
– Drizzle with some olive oil.
– Top with some more fresh torn pieces of basil. 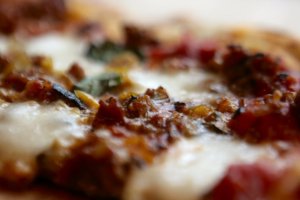 The fresh mozzarella pooled within and around the sausage. So nice, really allowing you to taste the creamy milky mozzarella as a separate element of the pizza.

This pizza rocked! It looks gorgeous, doesn’t it?!!! It was delicious. It was balanced and FULL of flavors from the Spicy South Bay Sausage and sweet roasted tomato sauce and the creamy fresh mozzarella. I made another pizza without the clams and it was equally awesome. As I said above, we also took the left over sausage and put it over some spaghetti the next day for another ridiculously tasty meal. 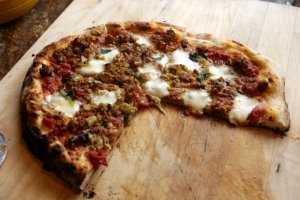 I loved this pizza!

By cooking up the sausage this way, I have found that the flavors of the ingredients blend together to become an ingredient that is more complex than just the sausage. If I simply added some cooked sausage and some cooked leeks and fennel they would be great on a pizza because they would come together in each bite. However, blending them together beforehand allows the liquids (beer and tomato sauce) to bond them together, creating something more luscious.

I hope you’ll give this one a try and let us know about your results!