The full name of this sauce is actually Big Brad’s Super Fantastic Smashed Tomato Sauce, but I am only mostly serious about that. 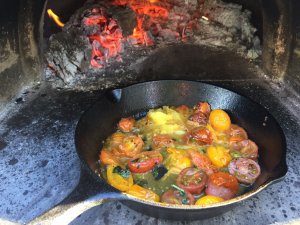 Brad’s first ever Smashed Tomato Sauce! I added some beer while cooking just to add some liquid because I was trying to lead these tomatoes down Saucy Road.

I like to alternate the sauces I’m using to find new flavor combinations, textures, and themes for my pizzas.  I do make a lot of pizzas and I’m always looking for something new, or ways to make something different and, ultimately, “better.”   I often use cherry tomatoes alone on a pizza without any sauce.  I slice them in half and place them cut side down which creates little tomato bombs of flavor around the pizza.  As the pizza bakes, the tomatoes steam inside their own skin and soften and begin to ooze onto the pizza.  The liquid blends with the drizzled olive oil and even blends into the melting cheese.  What you end up with is a topping — a burst of tomatoes — but the liquid from the tomatoes also becomes a sauce.  It’s a nice way to use and feature beautiful fresh tomatoes. 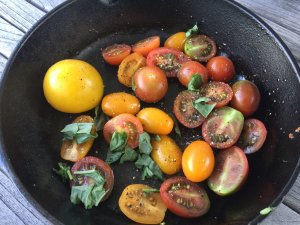 When I started making them, it looked more like I was gonna cook up my tomato salad. haha

I picked up some freshly harvested, colorful heirloom cherry sized tomatoes at the market.   As I was preparing to make my pizza and slicing up the tomatoes I got the idea to toss these into the wood fired oven to pre-roast them before putting them on the pizza.   After placing them into a cast iron pan, I added some basil, salt, pepper and drizzled olive oil all over them.  I could have stopped there and served it as a salad with the addition of some balsamic vinegar, but for some reason I thought about SMASHING them after they came out of the fire. 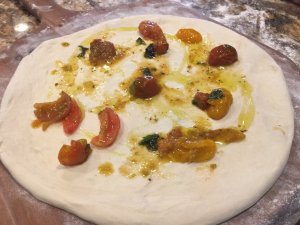 Sort of like when I just used to place cherry tomatoes onto the dough and bake them into the pizza. This creates more sauce and more opportunity to play with the flavor profile.

I don’t know where the idea to smash them came from, but it was one of those aha ideas where you envision the end product beforehand.  I poured more olive oil onto the tomatoes, not to coat them more, but to add to what would become the sauce.  I could see the roasted tomatoes smashed around in the pan with the tomato juices blending with the olive oil.  Really, I guess this is just a simple quick rustic tomato sauce but, in a way, the left over flesh of the tomato solids also remains as both part of the sauce and a topping ingredient.  While I was cooking my first batch of these I also poured in some beer as a way to add more liquid as I saw things coming together.  I wanted this to become a sauce along with being about the roasted tomatoes.  It came out really nice. 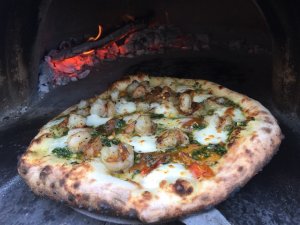 This was over the top! The tomato sauce and pesto became a couple of old friends instantly! The shrimp were done to a turn and there was just enough fresh mozz to warm your soul! Yummmmm!

For the shrimp pizza, I blended it with some homemade pesto, and this turned out to be nothing short of amazing!  The tomato sauce and pesto blended together and went beautifully with the shrimp pizza.  It was light and fresh and full of flavor.  I’ve also done this on my stove top when making the sauce and pizza in my kitchen oven.   It’s delicious and, of course, there’s no reason not to add other things to this, like roasted red peppers, or thinly sliced red onions, garlic,  or even chilis.  And, since I’m putting my thought process out there for you, I think adding some balsamic would be wonderful as well. 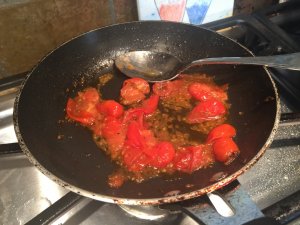 Not just for a wood fired oven. Smashing tomatoes works on the stovetop as well!

This is not only a really good sauce, but it’s simple and fun to create and play with.  What do you have in your kitchen right now that may enhance this?  What are you craving?  It can be sweet and savory, or spicy, or perhaps have a little tang to it.  Just as this works nicely on a pizza, it would also work well on a lightly dressed fresh pasta.  I’m just throwing this out there, but how about a little Super Fantastic Smashed Tomato Sauce, a touch of pesto, some grilled or broiled shrimp, all tossed into some nice pasta?  That’s really the pizza you see above, except as a pasta, right? Like I said, play around with this one and enjoy!