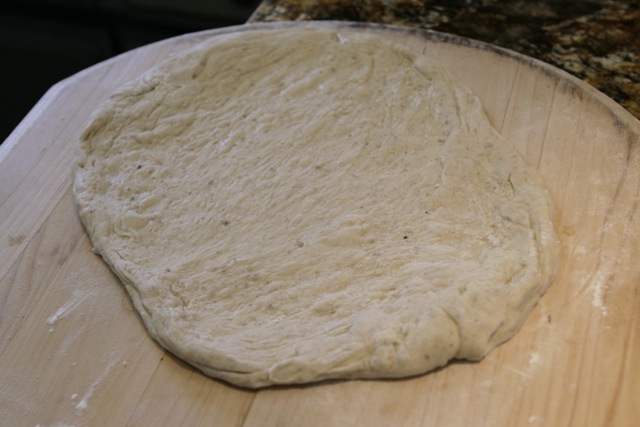 Being last isn’t always a bad thing.  As I often say, one of my favorite pizzas to make is the one that develops with left over ingredients or by chance.  Making pizzas is no small task.  You don’t generally just make one pizza – at home anyway.  You prep and throw a few pies together because it’s a bit of work and the operation does create a bit of a mess no matter how you manage it.  When you add in photography as part of your mise en place you get flour and ingredients all over the place — but it’s so much fun!  Besides all that, pizza is also meant to be eaten as a left over.  It’s good cold the next day for breakfast straight out of the fridge and how many things can you say that about? 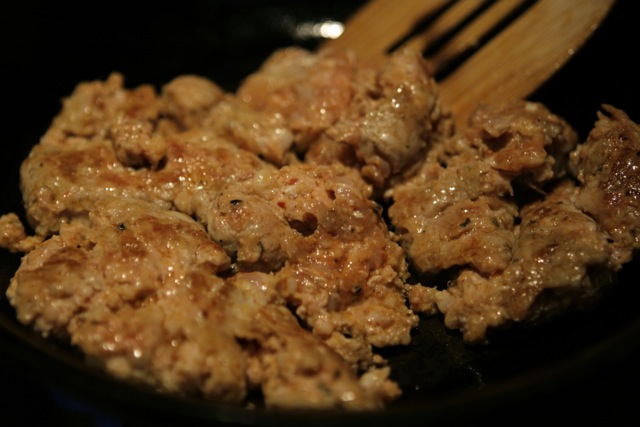 Pre-cook the sausage leaving room for it to finish cooking while it bakes on the pizza.

I set out to make my 4th version of the Signature Pizza using a Hot Italian Sausage as the anchovy replacement.  As I was shopping, I thought of the Buonchristiani Lamb Fennel Sausage Pizza I first made earlier this past year (see archives) and decided to pick up some fresh goat cheese to go toward that concept, and to also try changing another main ingredient to see what would happen.  So, here I was about to make version 4.  I think there was a leak in my glass.  I kept having to refill it as I made my pizzas.  I have to say, I think I enjoy having a sip of good wine or beer while I’m cooking as much as I do when eating the finished product.  In the same sense I think, for me, the act of cooking is half the fun of eating, 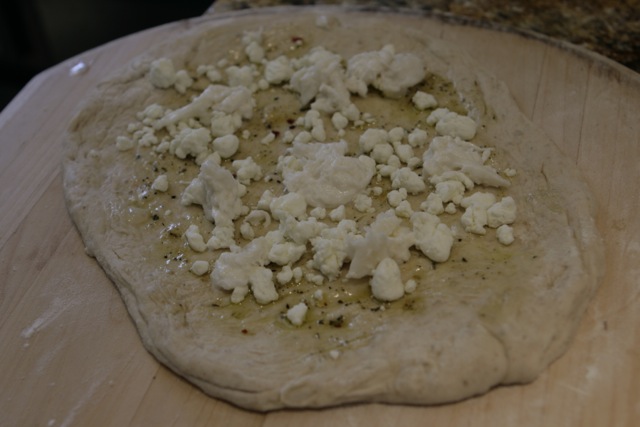 so why wouldn’t the tasting of wine or beer while you pull your ingredients together make for an enhanced experience just as when you pair the final dish?  I think this further explains why food is so important to us.  It really is a a gift that we gather around on a daily basis as we share our lives with one another.  I enjoy sharing a home cooked meal with friends, either here or at their house, but for all of these reasons, I think some of my favorite dinner parties are when you gather and cook together, essentially making the dinner prep part of the dinner party.

But, this time I was alone in the kitchen.  The family was circling, but busy doing other things while they waited for the next pizza to emerge from the oven.  Alone, I had to march on, knowing that they would soon gather and, hopefully, enjoy what I was making.  I know Owen would.  He’s like Mikey – he eats everything! 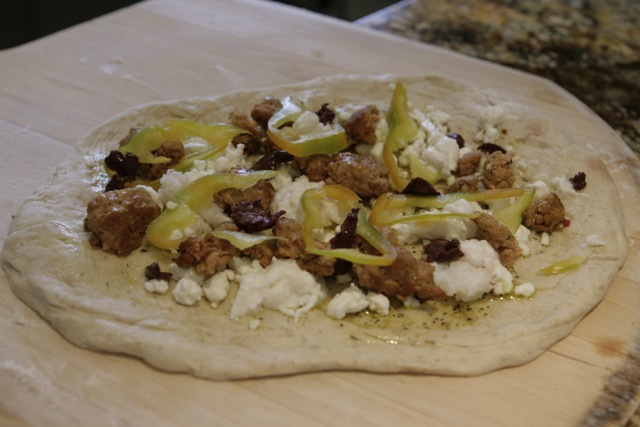 The ingredients on top of this version of the Signature Pizza are basically the same as the previous except for the substitution of the Sausage and Goat Cheese.  As I was assembling the pizza an avocado, sitting in a bowl on the counter, caught my eye.  It was ripe.  Okay, why not?  When life puts a chalkboard sign in your path, pay attention!  While the pizza cooked, I decided to cut it open and throw it on the pizza after.  It was green and would certainly look cool, and I thought it would be an interesting texture and mellow flavor accent on top of the spicier sausage and distinct goat cheese.  I have a nice bottle of balsamic vinegar that a friend gave me from the Central Coast.  It’s surprising that I still have it, because it’s so good you feel compelled to drink it, not drizzle it!  At the end, this sweet vinegary drizzle proved to be the final touch of a lucky accident. 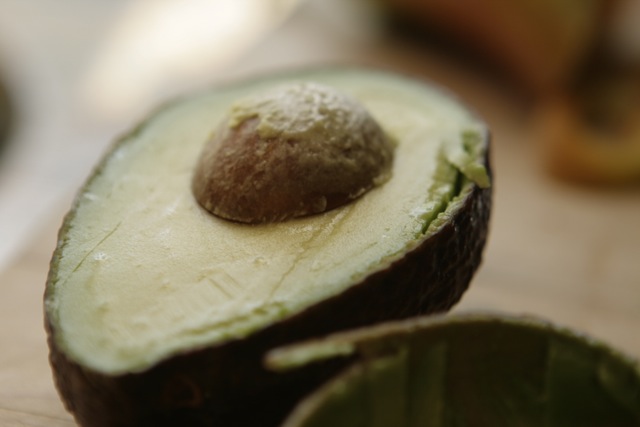 Using what you have, or using what is fresh will almost always give you a better meal.

This is a terrific pizza!  There are layers and layers of flavors that come at you from between the cool topping of avocado to the warm crusty dough on the bottom.  The Birra Basta, with it’s fruity earthiness, handled this quite well.  Each of my four variations of the Signature Challenge Pizza (see previous postings), in fact, delivered a slight variation of flavors to work with,  challenge, and blend with the Bruery’s beer.  What a great way to experiment on playing with a pizza and pairing concept, coming up with a number of similar but interesting variations.  It was also a pizza feast!  I’m still a fan of Kelly Whitaker’s original anchovy version, but I sure had fun creating some options to share with my family, who all agreed that these were some of the best pizzas yet! 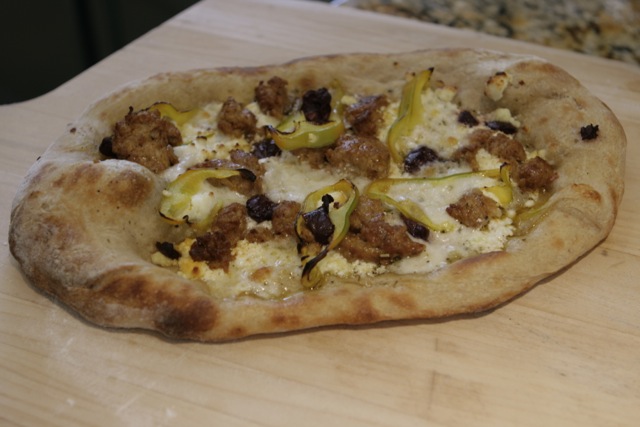 Just out of the oven it’s all melted together.

Pizza Quest Signature Beer Pizza Dough  *Any dough will work, but I have to say it’s worth it to make this dough.

Hot Italian Sausage – or, any other sausage you may feel like trying

Preserved Lemon   *Kelly Whitaker made his own in a pressure cooker.  Lacking the time and skills, I found a baking product called Lemon Curd to use instead.  It gave a nice tart lemon flavor in bursts, as well as a sweet finish.

Greens  *I had some wild arugula around.  This worked great.

Kalamata Olives – I had picked up some at the market and decided to use a few.

Fennel Salt
*I didn’t have that, so I diced up a little fennel greens and sprinkled some sea salt to finish the pizza. 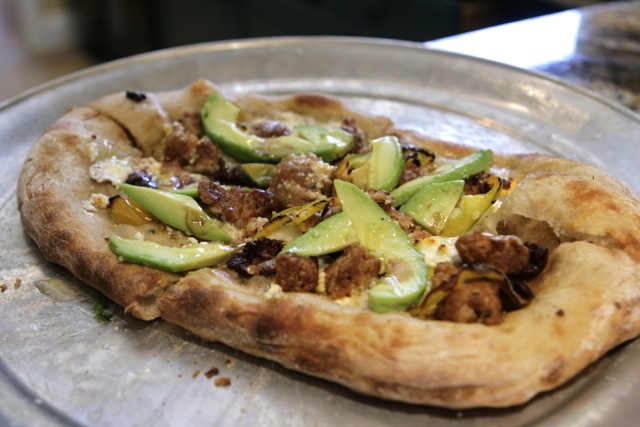 Add the avocado and drizzle with the balsamic. Cut to serve.

Add the Goat Cheese and then put a little Burrata in the center (bear in mind that it will melt and cover).

Add the pre-cooked, but not browned sausage (it will brown and crisp in the oven on the pizza)

Add the lemon curd, or preserved lemon in little dabs around the pizza.  This is meant to be a surprise, not an all over flavor.  It’s not a flavor you would think of for pizza, but when used sparingly I’ve become a big fan.  That may have to do with the fact that I have a Birra Basta sitting next to me that Patrick Rue and his team infused with lemon peel during the brewing.  Maybe… 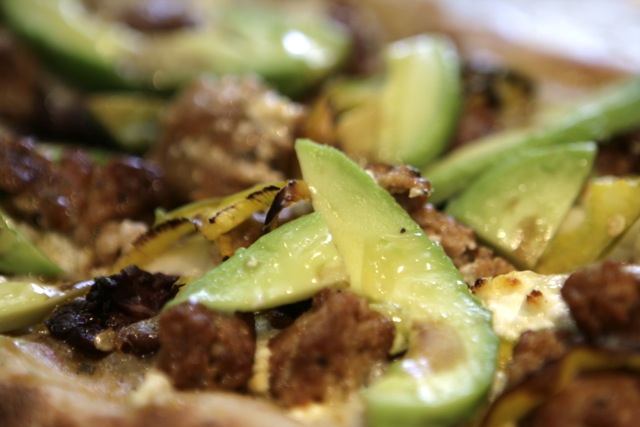 The final ingredient, of course, is a sip of Birra Basta to complete the pairing. Together they are better than the sum of the parts!

While the pizza cooks, cut the avocado in half.  In the skin, make 1/8″ slices lengthwise.  Scoop them out with a spoon.

Lay the avocado slices over the hot pizza.

Sprinkle or drizzle the balsamic vinegar over the pizza