Pizza Quest was an idea that popped into my mind a couple of years ago.  I called my buddy Jeff about the book I just read  – Peter’s “American Pie: My Search for the Perfect Pizza”.  Not long after I was corresponding with Peter and Jeff about how we could make this idea a show.  It still isn’t a show on TV, but we have launched the website and if it’s anything, it is an adventure in and of itself.  We have put some hard work into the site and hope it’s been as enjoyable to our guests as it has been for us. 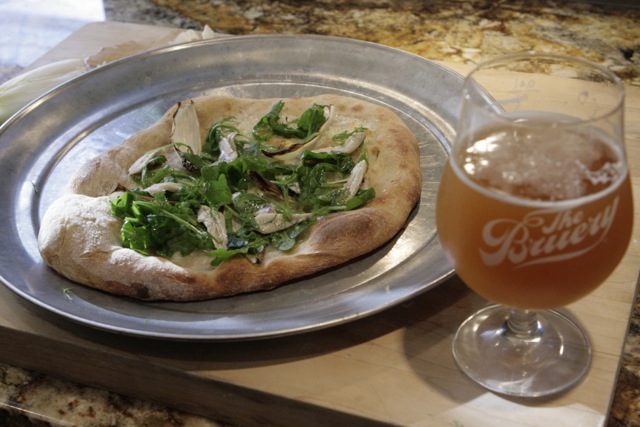 Which came first? The Pizza, or the Biere?

Another idea came along about 6 months ago and many of you have been following our quest to challenge Patrick Rue and his brewers over at The Bruery.  It was quite an experience watching and living that idea as it blossomed from it’s inception to us chasing this unique beer and pizza pairing across the western United States.  I find myself at home now, thinking back on the whole thing, and I’m smiling.  It was just amazing to be me standing with the likes of Peter Reinhart, Kelly Whitaker and Patrick Rue.  My father is an actor.  I remember when I was younger – oh, so much younger. He had come home from filming an episode on Cheers during it’s hay day.  He said it was like stepping in and playing on a Super Bowl Team for the week.  As I wrote in a previous photo caption, I felt like I was standing with giants. 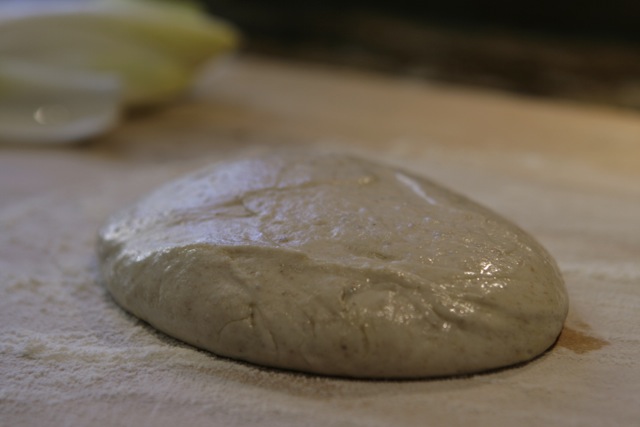 We didn’t move the world.  But, we moved our lives a good measure toward our common quest for a better quality of life.  Each of us can participate in this everyday, or as often as we wish.  True artisans like Kelly, Patrick or so many others we have met along the way do it for a living.  But, it’s there for all of us to experience as we challenge ourselves to participate in life.  It’s amazing to me, even as one of the nuts behind Pizza Quest, that pizza can be such an interesting way of exploring these aspects of life. 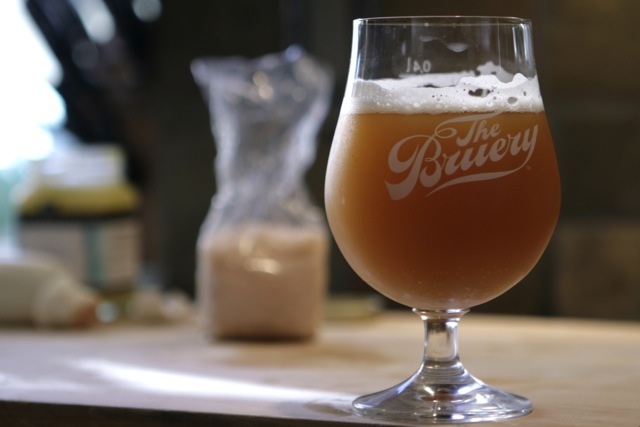 What will I do, when my friends run me out of my beer? I have to make a lot of pizza while it lasts…

One of the benefits of being a Pizza Quester is that you get a few perks.  We don’t get many, but the few we’ve gotten have been nice indeed.  Patrick offered me a keg of Birra Basta since they didn’t bottle it.  I didn’t have a kegerator, but always wanted one.  So, now I have a kegerator and a keg of Birra Basta – a beer brewed by a great brewery that was at least partially inspired by my ideas.  How cool is that?

Now, what better way to enjoy the beer than to make the pizza it was created for?

Here’s my first version of the pizza that Kelly created to rest atop of Peter’s Signature Bruery Pizza Dough.  I will follow this up with a few more variations on this pizza in the coming weeks, which all turned out amazing as well. 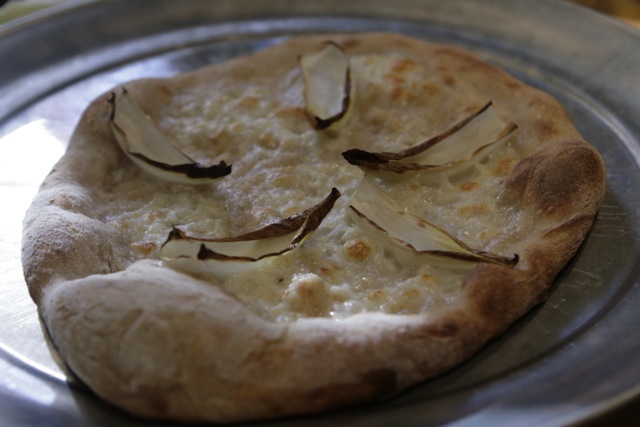 Hot out of the oven. Waiting for the finishing touches.

-Pizza Quest Signature Beer Pizza Dough
*Any dough will work, but I have to say it’s worth it to make this dough (you can get the flour by contacting Central Milling — see the link to their site at the top of this page).
-Squash Blossoms
*I couldn’t find any, so I substituted baby Belgian endives
-Burrata Cheese — it’s a blend of fresh mozzarella filled with creme fraiche or mascarpone cheese.
-Preserved Lemon
*Kelly Whitaker made his own in a pressure cooker.  Lacking the time and skills, I found a baking product called Lemon Curd to use instead.  It gave a nice tart lemon flavor in bursts as well as a sweet finish.
-White Anchovies
*I found a marinaded white anchovy at Whole Foods.  It was delicious – was dressed 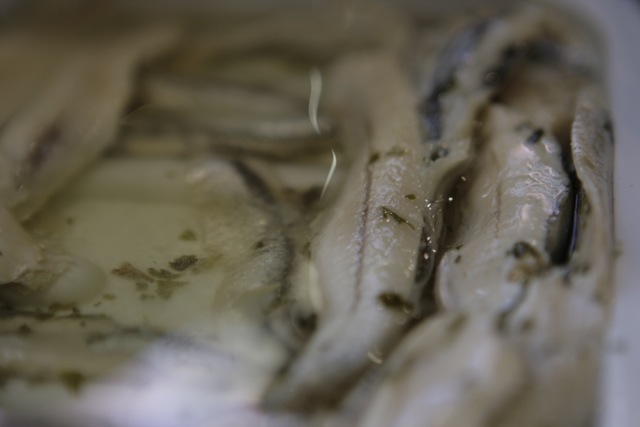 You can cut these up, or use whole.

in a lemony/herby oil – which I used to toss into the greens.
-Greens
*I had some wild arugula around.  This worked great.
-Fennel Salt
*I didn’t have that, so I diced up a little fennel greens and sprinkled some sea salt to finish the pizza. 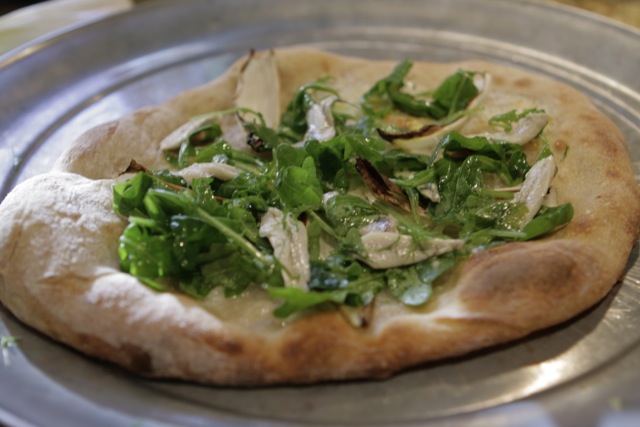 Add the Burrata Cheese around the center of the dough (it will melt and spread).

Lay out the endive leaves.

While the pizza cooks, toss some greens with the white anchovies.  Again, these were dressed in a nice lemony herby oil.  I didn’t add anything else to the salad.

Take the pizza out after 8-10 minutes. 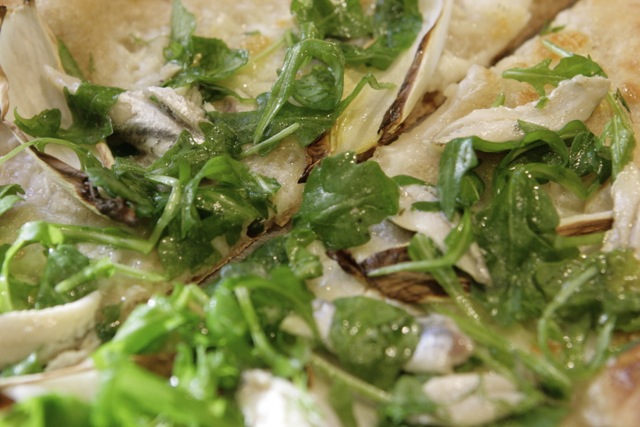 Add the lemon curd, or preserved lemon in little dabs around the pizza.  This is meant to be a surprise, not an all over flavor.  It’s not a flavor you would think of for pizza but, as you’ll see in some coming recipes, I’ve become a big fan.  That may have to do with the fact that I have a Birra Basta sitting next to me that Patrick infused with Lemon Peel during the brewing.  Maybe…

Lay the salad mixture over the hot pizza.

Sprinkle the fennel and a little sea salt across the pizza (sparingly).

Oh, and pour your second glass of bier! 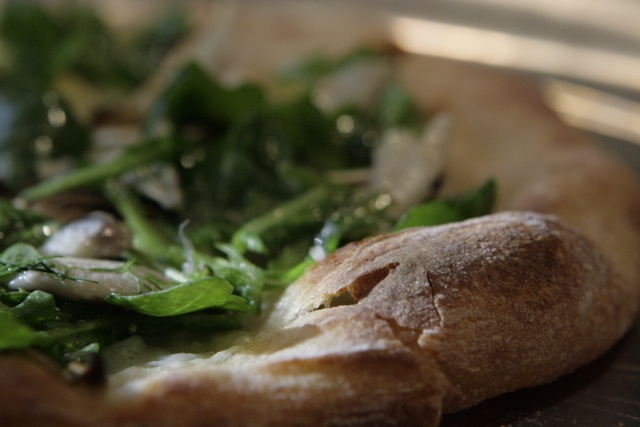 This pairing works.  The crust sets it all up and you are literally experiencing a flavor affair in your mouth.  You then take a sip and it becomes something else, similar but altogether different.  Enjoyable is a word that comes to mind.

I ate this pizza all by myself.  I had some other ideas along these lines that I wanted to share with my family – but they wouldn’t go near the white anchovies with a 10 foot fishing pole!  Of course, I’m not talking about my son Owen – he actually walked in and had one of the slices.

More to come on this…