What do you do when life gives you lemons? Well, of course, we all know you make lemonade! Recently, life delivered a volunteer jalapeño plant in a section of my yard that shouldn’t have been growing anything because my sprinklers are on the fritz and we’re in the middle of a drought here on the West Coast. 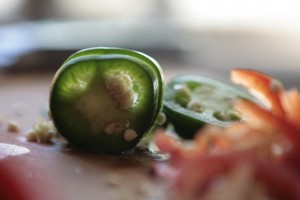 My jalapeños were turning red. I love the contrast having the two colors. Does it taste different? Probably not if you were blind folded, but…

A few weeks later, while the fire in my Primavera wood-fired oven was working things up to pizza temperatures, I noticed the jalapeño plant trying to stand tall there in the garden. The jalapeños were in the stage of turning from green to red. You don’t often find red jalapeños in the store, at least not for long stretches, because they are generally picked before they ripen. Jalapeños start their journey green and, if not picked while green, eventually ripen and become red and then, at some point, a good amount of them end up on my plate.

If you’ve read many of my pizza story-recipes you’ll know I’m also a fan of the Fresno Chili. These work really well for this great pizza topping I came up with.  Fresnos can be a bit hotter than a jalapeño, and they also have a little more flavor.  I find them to be sweeter and smokier tasting, but this is no cut down on Mr. Jalapeño! 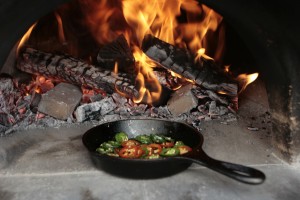 This is so easy to make – perfect for when you are waiting for the oven to come up to temperature!

Ever take a big bite into a raw jalapeño or other hot chili pepper? Taste what?!! It’s burns! But, as you probably know, cooking chilies reduces the heat, allowing more of the flavor of the chilies to come through.  For topping my pizzas I would often pre-roast, or saute my chilies taking a little edge off the heat and bringing out some of their inherent flavors.

As I was trying to come up with a way to use these jalapeños on my volunteer “guest” plant, I came up with an interesting new topping! 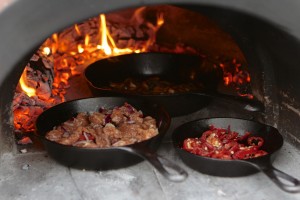 Here I have some mushrooms going in the back, some beer soaked italian sausage with red onions and, of course, another batch of chilis (these are fresnos).

I thought about just sautéing them up as usual in a cast iron pan on the hearth of the oven as the fire was building.  I often use this time to pre-cook some things like peppers, sausage, and mushrooms that I’ll later use on my pizzas.  After slicing up the chilies I tossed them into the pan. I drizzled some olive oil on them and thought, why not add some kosher salt and black pepper because, well, it felt like the right thing to do.

I roasted them until they got softer and some of the seeds and edges begin to char.  They looked good, really good! So I figured I’d just use these to toss on my pizzas, before or after I baked them. Nice… 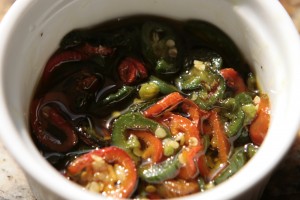 After the WFO, I put them in a ramekin and add some rice wine vinegar. Taste and adjust by adding oil, salt or more vinegar as necessary.

But, wait! I had another impulse while looking at them and inhaling their aroma. I remembered when we were filming with Kelly Whitaker of Basta, in Boulder and, while he was making a dish, at the end he grabbed a plastic squirt bottle and shot some vinegar into it and said, “This is to brighten it up a bit.”

“Hey,” I thought, “How about brightening these babies up!” I pulled down some Rice Wine Vinegar we had in the cabinet and added a little. I stirred the jalapeños and tasted. There was definitely something going on here. I’ve heard of quick pickling, but what about INSTANT pickling? I decided to add a little more vinegar and then a little more oil and salt and I found myself chomping away at these “instant” fire roasted jalapeño pickles before they ever got to the pizza.

The beauty is that they are so easy to make, you can just make them fresh each time; no need to worry about storing them (though I supposed they would store well for a week or two in the fridge but I haven’t managed to save any because, well, you know). You can make up more whenever you fire the oven up. If I didn’t have a pizza oven I would sauté the chilies on the stove top and I think get the same effect – maybe with a little less char — or roast them in my home oven at the highest setting it will give me.

Because this is also a recipe post, here’s what to do “officially”, or at least as official as it gets here: 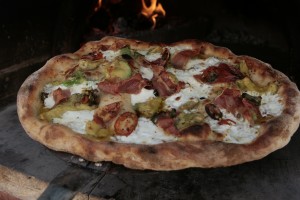 Slice up some chilies
* Not too thin! Not too thick!! Just right, maybe about 1/3-inch wide circles or strips.

Place in a Cast Iron Pan, seeds and all.

Sprinkle a good amount of salt and pepper over the chilies, to taste.

Drizzle with olive oil.
(* I sometimes add additional olive oil to also create a nice CHILI OIL in the process. Okay, I pretty much soak them in oil ‘cuz the finished chili oil is pretty awesome in and of itself.)

Heat it up in the fire (pizza oven), or over the fire (stove top), or in a home oven heated as hot as it will go. Cook till slightly charred.
* Check out some of my video clips on our INSTAGRAM feed @pizzaquesting of the chilies in the oven.

Pour the hot oil/chilies into a bowl to cool. 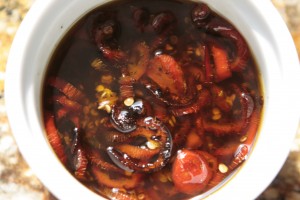 This batch of fresnos looked so good, I added more olive oil and vinegar to create “more” chili oil to save. Beautiful!

Add some Rice Wine Vinegar to taste. I haven’t measured the amount I use, but I would guess I’m tipping the bottle and adding about a 15-20% vinegar to oil ratio. Do it a little at a time and you will find your sweet (or sour) spot. If you add a little too much vinegar, never fear, the oil is near. Just add a little more oil. You can also touch it up with more salt/pepper if you think it’s needed.

This topping is the hot new thing here at Casa Ingles Pizzeria. Each batch has a slightly different flavor. The last round I did with Fresno chilies were sitting on top of a fresh mozzarella pizza with La Quercia prosciutto and a little of their Nduja (prosciutto spread), and finished with dressed baby arugula, and the chilies added a nice spicy sweetness, but also hinted at a lemony note in the background. 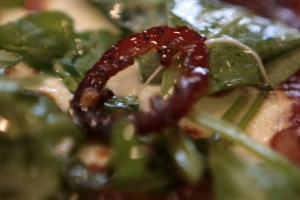 On this pizza which had some Bianco DiNapoli tomatoes, fresh mozz, arugula and some of La Quercia’s delicious prosciutto as well as a bit of their Nduja, which is a spicy prosciutto spread, the pickled fresno chilies also gave added a hint of lemon into the equation. This pizza had salt, spice and sweetness all going at once. Awesome!

To use, just drizzle on some of the chili oil and place the chilies around your pizza and, in the words of Kelly Whitaker, these will “brighten up” your pizzas (or eggs, sandwiches, pastas, and pretty much everything else you make). 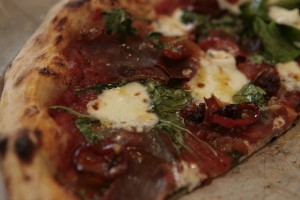 I yearn for this pizza again as I’m writing this! I yearn! I have issues! Have fun and enjoy!!

Have fun and enjoy!!

*Note: There is no reason not to add other veggies in with these chilies while doing this. How about sliced red onions? Garlic? Or what about zucchini? Time to play some more — let me get back to you on that….

Brad is on fire with his recent recipes, literally and figuratively. Inspiring!!!