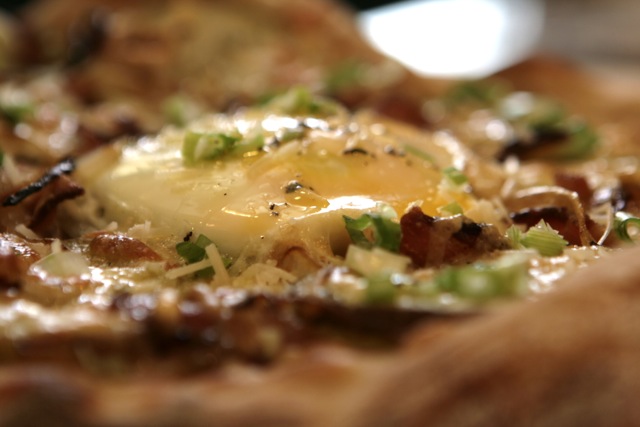 The first time I had egg on a pizza was at a little French Creperie in Victoria on Vancouver Island, British Columbia.  My family was visiting me while I was working up there, and we took a weekend trip over to the island.  One morning we went to this little place I read about known for having a good cappuccino.  When I saw that there was a pizza with eggs, I had to try it.  I don’t know about you, but when I am eating eggs, toast is the primary delivery system for getting those eggs with the sauce, bacon, sausage, etc. up to my mouth.  Why wouldn’t a pizza with the egg breakfast already arranged on it be the perfect meal? 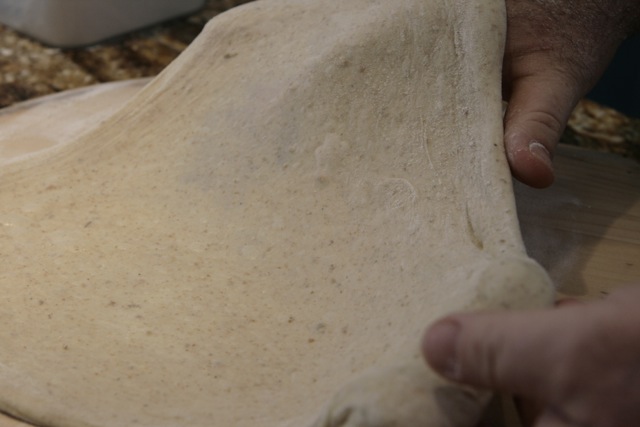 Lay the dough out on a well floured peel so the egg will not fly off the end if your pizza decides to stay with the peel.

That first egg pizza was a scrambled egg version with some Tyrolean bacon, chives and a little cheese mixed in.  It was truly delicious.  The eggs were still moist.  It was cheesy and the bacon, I found out, was painstakingly chosen over many others based on how it performed on the pizza.  I would have to say it was an epiphany moment for me.

A few years later, while we were filming the original Pizza Quest road trip, we were in San Francisco at Pizzeria Delfina and these guys opened my eyes a little wider.  They made a pizza and finished it off by simply cracking an egg on top.  It came out sunny side up.  Craig Stoll, the owner, cut up the yolk with a fork and knife, spreading it around the top of the pizza.  Egg epiphany numero dos!  I love the runny yolk dripping off of my “toast.”  It’s a wonderful textural eating experience.  The yolk is, in effect, both the meal and a sauce. 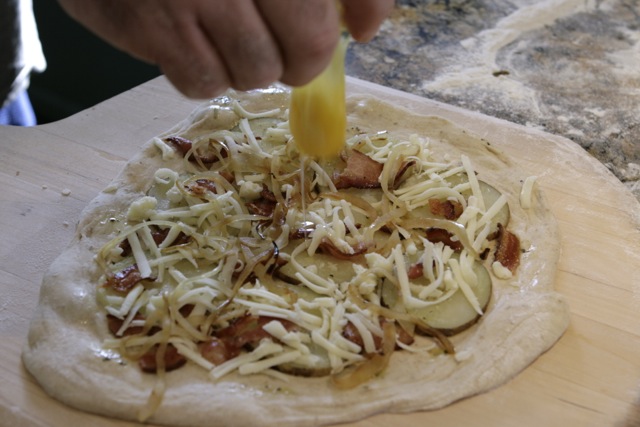 Fast forward to now: I was in the mood for some runny yolk and pizza.  So I decided to have a Pizza Egg Fest!   I’ll release these in three short recipe pictorials.  They all came out delicious and made a fantastic breakfast the next day. The first was inspired by Nancy Silverton at Pizzeria Mozza, and it has egg, bacon, Yukon Gold potato with Bermuda onions to finish it off.  It’s amazing!  Here’s how I did it:  I had some plain old russets laying around and a few boring scallions, but my eggs looked just like Nancy’s!  I’m sure hers are fancy, free-range eggs from chickens with actual names (Portlandia reference), but looking at them, my eggs were just fine. 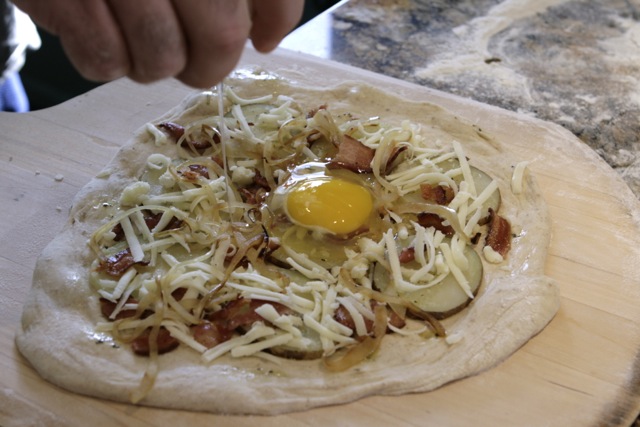 With a direct hit in the middle, it was off to the pizza stone. 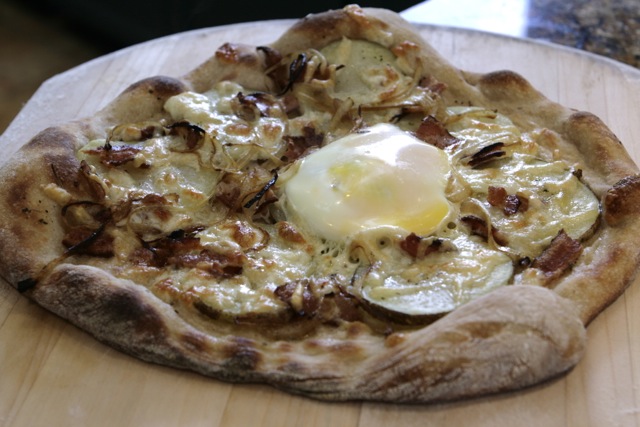 The trick is to get this out of the oven so your egg is like you want it. You have to watch very closely.

Spread the dough on a well floured peel.  Notice that I stretched the dough with my hands fairly thin.  You can see in the one shot that light is coming through.  I left the edge, or cornicione, in an irregular rustic “mess.”  You’ll see how nicely this ends up when I the baked pizza.  I think it’s a good way to create a real hand-made look, and I love the thicker puffed up areas that result.

Sprinkle a little of the Herb Oil on the dough.

Add a layer of sliced potatoes that are pre-baked but still firm enough to slice.  They will finish cooking on the pizza.

Break some bacon into pieces and spread them around the pizza.

Crack an egg over the pizza.  *Note: I used a lot of flour under this pizza to make sure when I put the pizza into the oven that the pizza came off the peel with the egg! 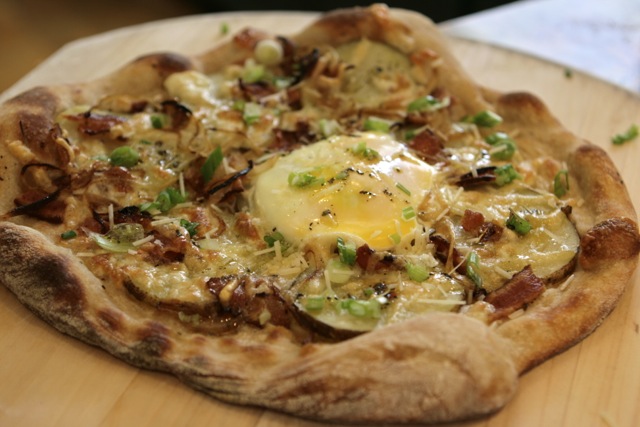 Add the finishing touches. The scallions go perfectly with this as a final topping, as well as, making a nice visual statement.

Bake in your oven for approximately 7-10 minutes.  For this one, you want to check on the progress of the egg.  The idea is to get it out before it gets too hard.  You want it to be soft, ideally runny so you can spread the yolk all over the pizza right before you cut it into slices.

*Note: Make sure you pre-heat the oven for at least an hour to get your pizza stone up to temperature.  I pre-heat at 550 degrees and then turn it to Convection Bake before loading my first pizza, which lowers the temp to 525 degrees. 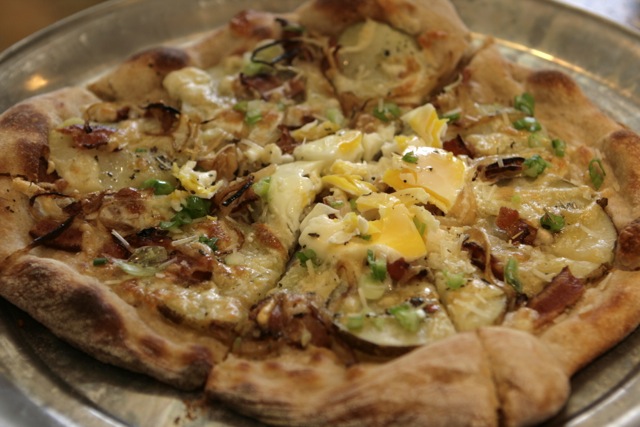 When this came out of the oven, the egg was still sunny. As I took pictures, it cooked a little more. The hard part with this is the timing! It still tasted great.

When the pizza comes out, sprinkle the chopped scallions over the top and add your grated Parmesan to finish.  (You’ll see that when this came out the egg appears soft, but as I took pictures and finished topping it, the yolk continued to cook.  By the time I cut it, it had solidified into more of a soft-hard boiled egg.  It was still great, but this is a good example of how you have to manage the time in the oven to bring the egg out on time.  Perhaps 30-60 seconds less for this one would have been perfect. Or, you can wait until the pizza has baked for a minute or two and then add the egg to the top. Your oven will determine this for you.)

Bacon, Egg, Cheese, and Hash-browns…Oh my!

Give this a whirl and let us know how you like to play with eggs on your pizza.

Brad,
The Egg Pizza looks AMAZING!!! I wanted to try making egg pizza last weekend, but didn’t have a recipe, so now I do. We had one in Sonoma that had spinich, bacon and egg, it was yummy too. LOVE MY WOOD OVEN.

Nice Pizza. One of my favorites is ham and egg and I make them all of the time. I find that if I back the Pizza half way and then put the egg on half way through you get the perfect runny yolk egg. Just me.

thought this was a wood fired oven site but the recipe is for a plain vanilla oven! 7-10 minutes in my forno bravo oven and you’d have charcoal.

This is a pizza site! It’s not only a wood oven site. I hope to get myself a wood oven soon, but for now I have to use my plain old vanilla oven!

Send us some pictures of your wood oven pizzas!

The idea of pairing bacon, eggs and pizza may seem a little off the wall at first, but after looking at the pictures, and the incredible recipe, I’m a true believer.

The proof is in the pairing of the different tastes. And you hit a hoerun with this one!

Thanks so much for sharing your insights and your amazing recipe.