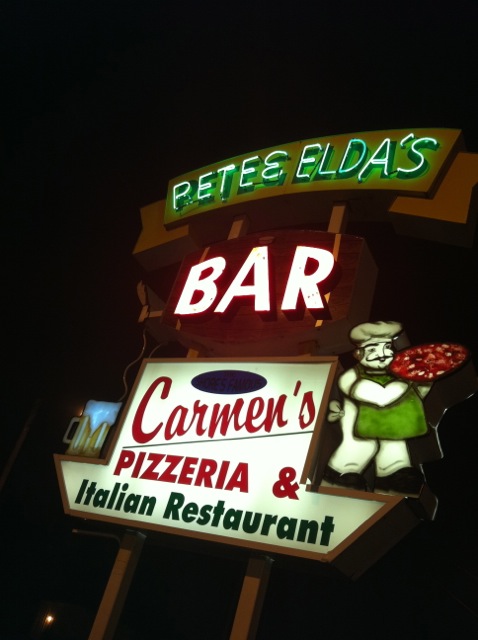 I got an email from a Pizza Quest member recently asking about pizza stones and “00” flours.  We chatted back and forth and he has enthusiastically shared one of his family’s favorite pizza recipes.  It’s the pizza he starts every pizza making session with.  From what he says, if he doesn’t get it right “The Family” let’s him know.

I’m really excited to try this pizza.  When Andy described his crust, I remembered a place my friend Holly Subhan took me to, while I was visiting her in New Jersey last year.  If you remember, she is the one who also introduced me to Mossuto’s where we found the Fat Lip Pizza. *Link She’s batting a thousand.  The pressure is mounting!

There’s always a debate when I’m around regarding what the best pizza place is.  She had been dying to take me to this Jersey Shore favorite called Pete and Elda’s in Neptune, NJ for some time.  They make a crust very similar to what Andy describes below.  It’s a very thin cracker like crust.  It is light, crisp, and doesn’t fill you up.  This is really, I believe, the quality that Holly loves about the pizza!   I also think she loves the atmosphere of the place.  The main part of the pizzeria is a huge winding bar that wanders through the large dining room. 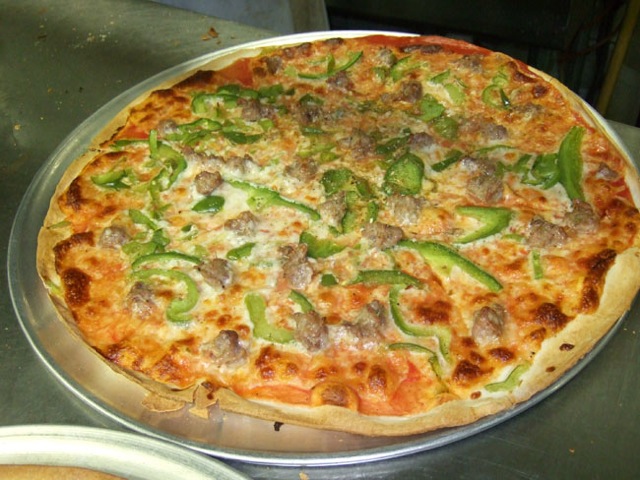 I pulled this off the Pete & Elda’s site. It looks like a sausage and pepper pizza and is making me hungry!

I can see that, even without a good pizza, this is a place I would like to hang out.  The people are friendly and, as it turns out the pizza is quite good!  I let her order her favorite the black olive and hot pepper pizza and we enjoyed a few beers and conversation with some of the locals.  If you are ever in the area I recommend you check this place out.

Now onto the Andy’s Potato Pizza…I can’t wait to try it!

Andy’s starter pizza. The family likes to start a pizza night with this and only this!

I asked Andy to give me a brief introduction to his obvious pizza obsession.  He said it all started in 1983 when he was helping a friend make some wine.  As the morning wore on, his friend said, “This is taking longer than we thought so you’ll have to stay for lunch, I’m making pizza”.  He remembers panicking, looking at the windows for a way out of the basement!  The idea of a homemade pizza had him looking for excuses to escape.  They made the pizza on unglazed quarry tiles in a hot oven and, at the moment he took a bite, he was hooked.  His friend referenced Ada Boni’s book, Italian Regional Cooking, which now gave him some great recipes to work with as he began feeding his new obsession.  He said that things remained essentially the same till 2003, when “I discovered Peter Reinhart’s book, American Pie.  This was an unbelievable source of information and inspiration.  Now the knowledge base has expanded again with Pizza Quest, all limits have been removed.”

How great is that?!  I have a similar story and the birth of Pizza Quest does too.  I too found Peter’s book American Pie and then contacted him and a while later Pizza Quest was born.

Here is his recipe for Pizza Romana or, as his family knows it, Potato Pizza.   Here on Pizza Quest, we’ll be calling it The Andy Trottier!

A rolled and smooth dough…

When I started making pizza in 1983 I used Ada Boni’s recipe from Regional Italian cooking, making 12″ X  14″ pies.   I now use Peter’s Napoletana Pizza Dough from American Pie.   I tried to create a table for multiple pies, using Peter’s original recipe and I messed up the calculations but made really nice, thin crust pizzas that the family loves.  Every once in a while I go back to Peter’s original recipe, but the family finds it a little too thick and chewy for this pizza.

The pizza in the photos is a 14″ X 16″ crust made from a 275g dough ball using KA Unbleached AP flour.  I always roll the dough; if I leave CO2 in the dough the family does not like it.  They prefer the crisp crackle and the flavor without CO2.  I make the dough for 5 pizzas. I used to ferment it in bulk in the fridge, but after Stan Ginsburg’s Tale of Two Flours, in which he outlined the VPN and fermenting dough balls separately, I am experimenting and find the individual doughs ferment better…. so far.

The recipe comes from a friend who worked at Mama Grazzi’s and they served this when they first opened.  Customers complained it was not pizza, because it didn’t have cheese.  It is still served today with pancetta, tomato, mozz & parm.   We start every Pizza Night with this one.

2 T Olive Oil (in addition to above)

Roll out the pizza dough, top with 2T Olive Oil.

Slice the potato on the finest setting (1/32″ thick max), on a Benriner (Japanese mandolin), arrange in concentric circles on the crust.

Bake at 550F Convection  (I have a GE Profile electric oven, 1/2″King Arthur stone on the bottom shelf) for approx 5 minutes.

You can’t see through too many pizzas.

Hope you enjoy it as much as we do!

Hi Brad,
I was wondering how this pizza would cook in my Pompeii WFO? At 750 to 800 degrees, do you think it would just cook faster or would I end up with “potato chip” pizza?
Thanks, and please keep posting those photos!
Rick M.

I usually cook this at 550F convection (electric) and it takes 5 minutes. The crust ia always the crispiest of the night because there is no cheese to slow the evaporation in the crust.

At 750-800F you would have a much shorter cooking time, 1-2 minutes max. It will just cook that much faster but should turn out good. I think at 750-800 for 5 minutes you would have a burnt cracker.

Let me know if you try it and how long it takes to look like the final photo.

Andy
I’ll try it soon! A cheese pizza takes from 2 to 4 mins. in my oven (picasaweb.google.com/xharleyguy) so I think you’re right on time.
Thanks so much for your response!
Rick

Definitely send us some pics, or info on how this turns out in your WFO!