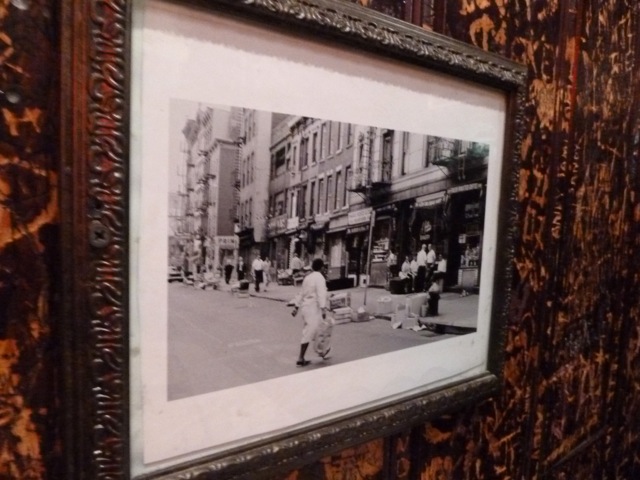 John’s Pizzeria on Bleeker since 1929 with carvings to prove it.

John Arena recently wrote a Guest Column here on Pizza Quest about one of the best areas in the country to go on a pizza tasting tour, or to engage in a personal pizza quest in one single neighborhood.  He doesn’t claim that this is the “best” place to go, lest he start a pizza turf war.  Rather, he defines Greenwich Village, NY as a special place that will deliver some of the best and certainly some of the most diverse and interesting pizzerias in one neighborhood that you will find.  I happened to have been headed back to New York the very same week that we published John’s article.  I knew I wouldn’t have much free time, but then again, I don’t need much of a window to seek out a good slice of pizza while in New York.  I always try my best to find something new, as well as to stop in at some of my other favorite places.  In a city this large the list is always growing – especially, when you only get to come in for a visit a couple times a year. 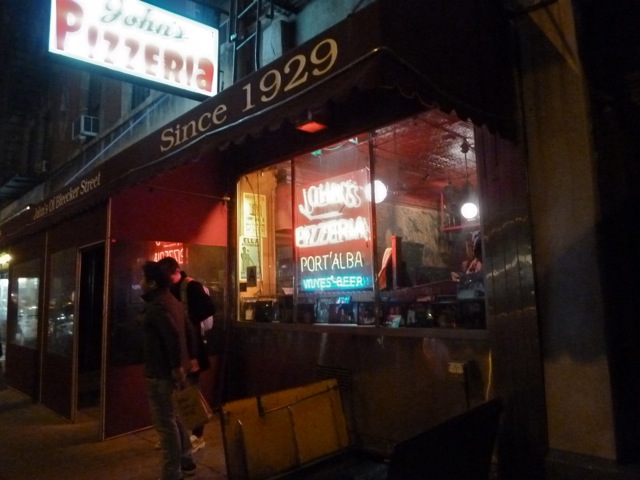 You can see the blood red walls and ceiling through the window. The place oozes old time New York – since 1929!

John had connected me with Scott Weiner of Scott’s Pizza Tours.  We tried to figure out a time to get together, but our schedule’s weren’t lining up.  When my first moment to escape for some “me time” came I targeted Bleecker Street in the Village, where I could practically crawl to hit some of the top pizzerias in the city in short order.  My hotel had a subway stop only steps from the lobby door.  The #1 train took me to within a block or two of John’s of Bleecker where I decided to start.  I had always wanted to go there, but my visits to Bleecker had thus far always taken me straight to Keste (if you’ve been to Keste, you’ll know why I kept returning!).  But, tonight I was following John Arena’s lead and was going to try a couple new places that he spoke about.  For a winter’s night in New York, it was quite pleasant.  There was a light rain just starting that felt like a little mist as the tiny drops began to hit my face while I walked down the street. 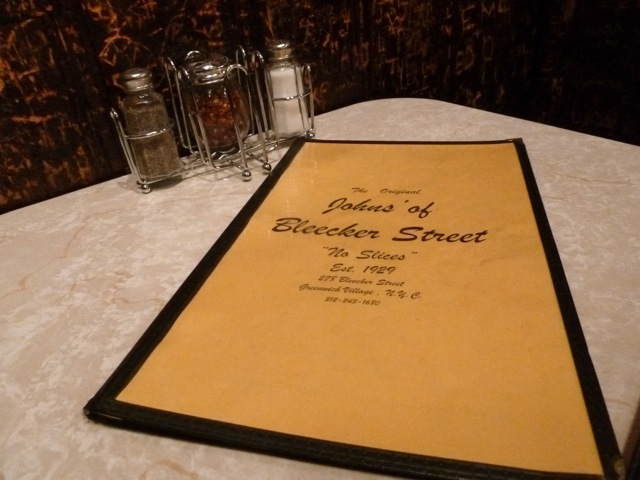 No slices! Sit down and have a-pizz!

I got to John’s and took a few pictures outside and could see through the windows that the place had a simple charm to it that had been worn in over time.  You quickly see just how worn in it is as you notice the carved wooden booths that so many customers, over so many years, have chosen to “decorate.”  I looked over the menu and the long list of pizzas.  These are just starting points, or suggestions.  The menu encourages that you build your pie from scratch.  Each suggestion starts with Cheese, then Tomato Sauce and it goes from there.  A few things popped out at me right away: Anchovies, Sausage and Mushrooms.  It was as if these ingredients came off the page at me from different lines.  I didn’t find that exact combination, but stopped looking much beyond my realization that this was the pizza I wanted. 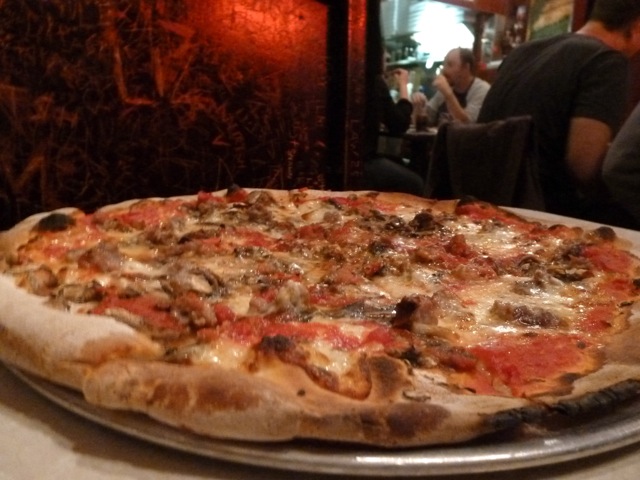 My anchovies were calling me. This is a beautiful looking pie.

I ordered a beer, a simple salad, my pizza and waited.  As a pizza quester this place, on this night, was perfect.  The pizzeria is old, worn, comfortable in a cozy sort of way and just oozes what a New York Pizzeria is meant to be.  It was raining outside, which always makes being inside just a little better.  It’s like that difference between reading a book on your couch, or watching a movie when it’s raining outside.  The room was busy.  There were a few larger groups, some smaller ones and some couples gathered around the tables in various configurations just talking, eating pizza and enjoying their night out.  I forgot it was Valentine’s day here. It felt like any night in what would otherwise be a small neighborhood pizzeria in any city or small town across the world. 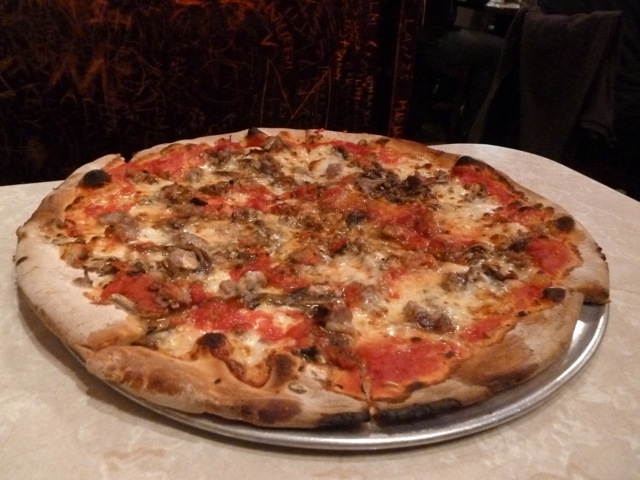 What I notice here is a simple balance of ingredients.

My pizza came and looked terrific.  It said New York to me.  It was the classic New York style pizza that called back to my childhood memories of what defined what pizza was and should be.  This isn’t what I would call street slice pizza that I also loved so much.  The coal fired crust separates it there.  But, it was that simple New York Pizza that so many west coast pizzerias just couldn’t seem to reproduce for so many years.  You find a decent one, or a good one once in a while, but it’s not the same.  Maybe it is the water?  Or, maybe it’s an East Coast/West Coast thing?  This could be an interesting Quest series to tackle some day. 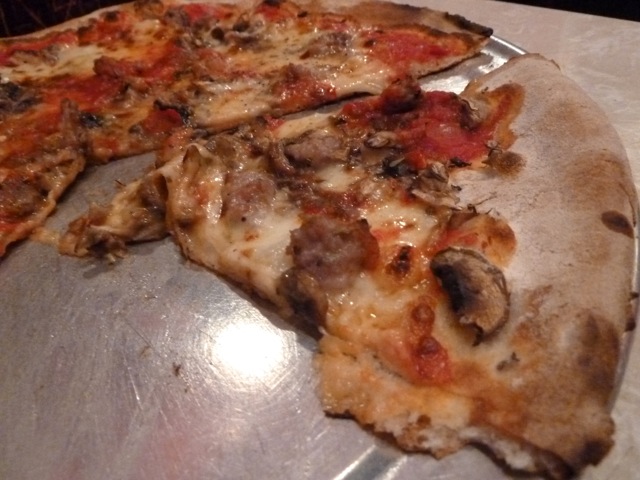 The coal fired crust which is the beginning of this pizza, is also the end note that you really appreciate.

I rarely get to have anchovies on a pizza at home because my family isn’t “down” with the concept.  I’ll hide a little in here and there, and sometimes get away with it if I chop them up really fine and sneak them into the sauce below the melted cheese, but that’s not really a good idea. When they figure it out, it’s bad news!  So, these anchovies were that much better!  This pizza had a perfect balance of ingredients: cheese, tomato sauce, anchovies, sausage and mushrooms.  I can’t fail to mention the delicious coal fired crust again!  My pizza was a great example of how the simplest ingredients, combined in balance, can create a truly satisfying meal.

I am not here to review Johns.  I didn’t speak to anyone about their ovens, or find anything else out about the place.  I was here to experience it.  I grew up in New Jersey and my pizza benchmark is based on this kind of pizza.  This is the city and the style of pizza that laid the foundation of what would later become this more formal quest.  At some point I remembered I was on a little Greenwich Village pizza crawl here and stopped short of eating the whole pie to save room for then next stop.  Let me tell you, that was tough! Johns on Bleeker St. lived up to it’s reputation.  I would love to come back and explore the full range of this place some more in the future.