How do you re-heat your pizza? 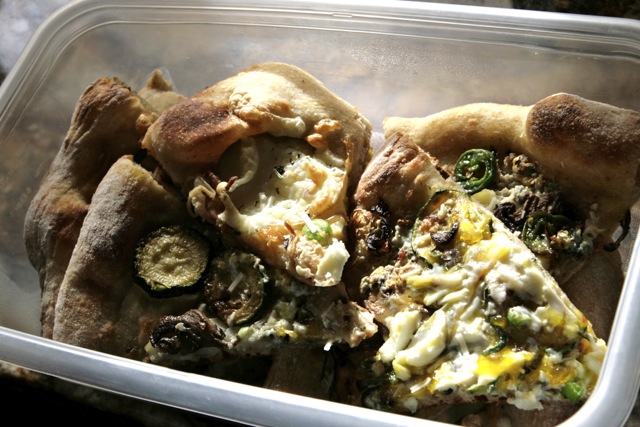 A few left over slices waiting for round two…

A Second Transformation – How do you reheat your pizza?

One morning recently I woke up thinking of making my second favorite pizza: Left-Over Pizza.  I often eat these babies cold, right out of the fridge — there’s just something I really like about a cold slice of pizza.  This is a great grab and go breakfast, washed down by a hot cup of coffee as I drive to work.  Ideally though, if there’s time, I’ll reheat my pizzas.

I thought about writing about my reheating process because of a recent incident.  I was working with a fellow pizza nut.  I had ordered some pizza from a new place in LA and sent a box up to her office.  I was out prepping a job and when I asked her later how the pizza was, she told me that her assistant had re-heated the pizza in the microwave and she wouldn’t eat it.  I loved that, as I feel the same way.  Microwaves are great for soup and left-over Mexican food, but not pizza.  The dough is totally turned into something else — a hot, tough-chewy sort of space dough, or cardboard type of thing.  Not good. 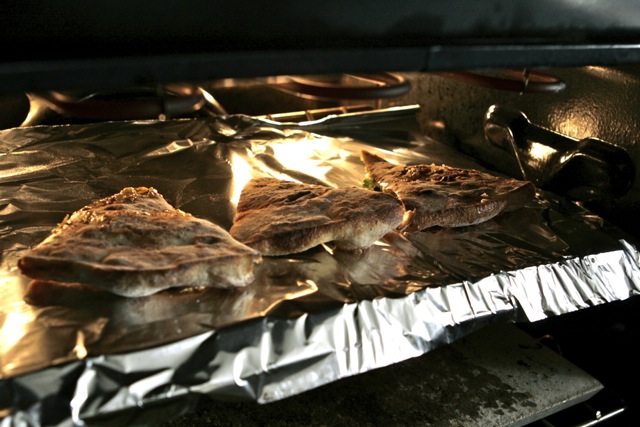 Place on a cool foil covered pan and place into oven – face down. Get that crust in the right place and then invite the cheese and toppings to the party.

Over the years, I can’t say when, I developed my pizza re-heating routine.  It’s not complicated, but I think it’s worth a post.  I hope we’ll get some feedback and some new secret tricks from you as well.

My secret: I broil my left-over wedges.

It’s not as fast as the microwave would be to bring it up to temperature, but it also doesn’t destroy what was once a good slice of pizza.  I would even go so far as to say that it may breathe another bit of life into the pizza.  It transforms it to something similar, but adds another aspect of handling, or cooking to it — a short high intensity exposure to heat creating a crisp and bubbly hot slice. 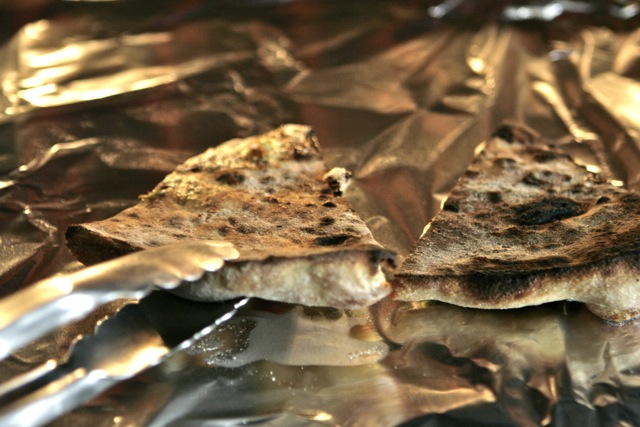 I try to get the crust to be warm, a little crisp and still have some of it’s soft – moist interior.

I use the top rack.

Cover a cookie sheet with foil.  Place the pizza slices on the foil top down (cheese side down – crust up).  Sometimes toppings may come off, but you can grab them when you flip the pizza and place them back where they belong.

You have to pay attention here.  The broiler is hot and we’re way up top on the upper rack and you will burn the pizza if you get distracted.  The trick is to find that perfect moment to flip the pizza.  You want to see the crust bottom turning brown.  You may see moisture bubbling loose from the crust.  You may let a little of it actually char.  Be careful, 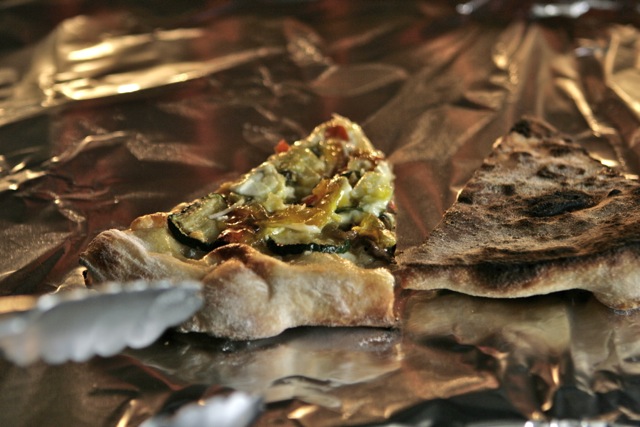 Now it’s time to cook the top. The cheese side (facing down) remains solid enough that it shouldn’t stick when you turn it over.

it will turn brown and then go black (too far gone!) rather quickly, so pay attention.  It is a matter of personal choice how far you take this.  Think of it as dialing in your crust.

Pull the rack out a little, or reach in with long tongs and flip your slices.  Pick up any fallen toppings and place back on the pizza.  Again, watch closely.  I’m looking to get things bubbling and turning a little brown.  You can decide how far to take this. Again, a little char here is good, as long as you don’t over-brown everything along the way. 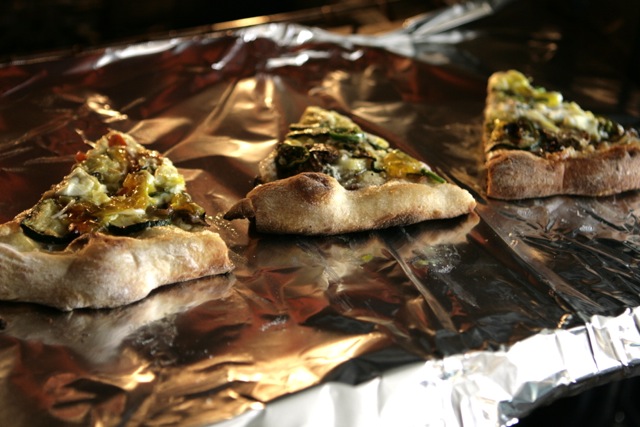 The crust is warm-hot-crusty and now the toppings melt bringing the slices back to life.

What you get with this method, in my opinion, is a new slice of pizza.  It’s not the same as the original because you have transformed it a little, or a lot depending on how far you take it.  The crust is crisper than the original, but it’s still tasty and crunchy and feels like bread should.  It’s still a nice pizza dough.  The toppings are melty, caramelized, and slightly more melded to each other than the time the pie first came to life.

Delicious in my opinion!

I know Peter has another method and I want him to share that here as well.  He said that it’s the same idea focusing on bringing the pizza back to life, or giving it another life although slightly transformed from the original. (See his note at the end of this post.) 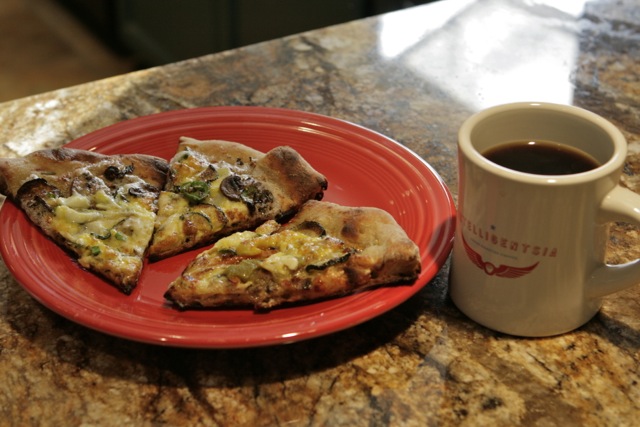 My egg pizzas become my breakfast pizza! You can’t beat that.

One last thing on this.  I was just in NY again and took a train out to Di Fara’s Pizza in Brooklyn.  Let me first say, this was well worth the trip and the wait, as Dom DeMarco made one pizza at a time for a long list of customers.  Afterward, I spoke with Peter to tell him about the pizza and he said he heard a secret to experiencing these pies.  The “secret” was that if you order a slice, they will re-heat it and that second time in the oven really brings it all together.  Can I rest my case here?!  I didn’t try this at Di Fara, but I can now imagine what this secret is all about.

Let us know if you have any other secrets, or procedures in re-heating your pizza.

Note from Peter: Okay, here’s my variation on Brad’s excellent method:  use a non-stick frying pan and heat it up over a medium hot burner. Mist it lightly with olive oil pan spray or rub it with olive oil and place the slice (or slices), cheese and sauce side up, into the pan and put a heavy pan or pot or weight on it to press it into the pan (or press it down with your hand or a Teflon spatula or burger flipper). As soon as the bottom of the crust gets piping hot — about 30 to 60 seconds– flip the slice over, cheese side down, and again press it into the pan until the cheese melts, about 30 to 60 seconds. Use the spatula (or Teflon burger flipper) to get under the cheese and transfer the slice, right side up, to your plate where a hot, cheesy slice awaits you for breakfast or any time of the day or night.

I definitely think there’s something to that! If you find yourself at Di Fara’s you’ll have to see if the rumors are correct!

I go for a simple two part reheat process similar to Peter’s method but just a little different. First, microwave the leftover slice for about 30 seconds to jumpstart the reheat. Next, transfer the slice to a preheated medium hot frying pan and cover. Let it ride for five minutes or so until the crust is hot and just crispy enough (careful not to burn it – you really have to be patient and keep the heat at or just below medium) and the cheese is “melty” (my wife’s adjective of choice) once again. Occasionally I’ve spritzed just a tiny amount of water in there too (once the crust has come back to life a bit) which creates just enough steam to get a nice gooey melt on the cheese. It takes a little time and patience but this method beats any other method I’ve ever tried (and I’ve tried many). Give it a go and see what you think.

I’ve got a method that works quite well and seems simpler than those suggested. I place a thicker cookie sheet (I have Vollrath) in the oven and pre-heat it to 350°. Once the oven is pre-heated and the pan just as hot, I simlpy toss the leftover slices onto the pan and bake for five minutes. Convection fan is a plus and 3-4 minutes might be enough. The hot pan does a nice job of crisping up the bottom of the slice and the top gets heated through just fine. Really brings it back to life.

Well, I find that the best way to reheat my pizza is to preheat my pizza stone or cast iron pan if you don’t have a stone, ok so preheat stone 550 degrees, spray pizza with olive oil, place on stone, lower heat to 300 and let sit in oven for about 8-10 min and you should have a great tasting reheated pizza. What you don’t want is that flabby wet slice you sometimes get when too little heat is applied and the moisture from the frige makes the crust soft…try it it works every time

I found a great way to heat a slice in no time…Grab a shallow frying pan drop the slice in there and heat it up for 4-5 minutes on medium heat…I place a sheet of foil over the pan…The crust is crispy and the pizza top (cheese) is heated through as well….