A brew in Germania Dough 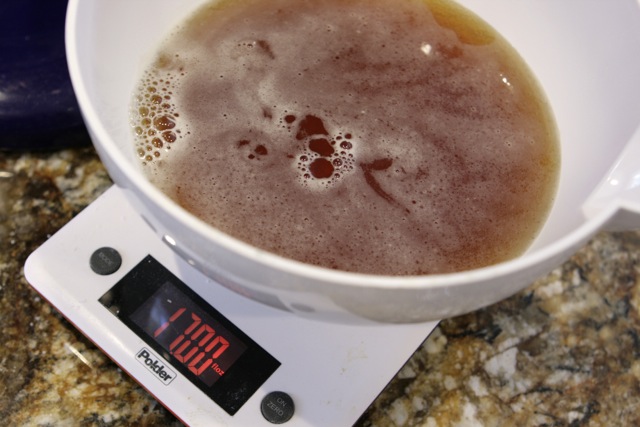 Quite literally, this dough truly is a brew in Germania!  I’m “working on” a keg of Firestone Double Barrel Ale.  I’ve had it a while and been too busy to use it up!  No time for friends to come help me get to the bottom of this keg. So, I thought I’d draw a pint or two and also use it in my Germania Flour blend from Central Milling.

I first tried this flour, which is officially called, Organic Germania Pizza Flour, when Peter decided to use it to make our Pizza Quest Signature Bruery Dough (as shown in a recent webisode); it is still one of my favorite pizza doughs.  It’s a little more difficult to acquire the malted barley crystal, which Peter used in the place of an actual beer, so I am using an actual beer as a substitute for my lack of malted barley crystal.  Also, it’s a fun way to make a pizza dough.  What goes better with a pizza than a cold beer?  It’s a nice way to introduce the beer to the pizza before it comes out of the oven. 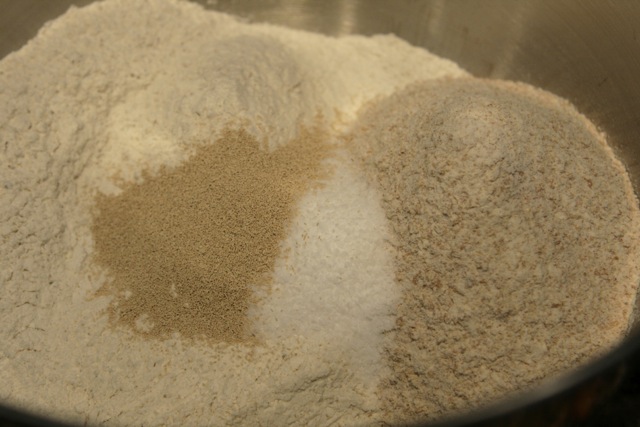 Central Milling’s simple description for their Organic Germania Pizza Flour is:  “Italian-German inspired rustic blend for pizza and flatbreads.”   I emailed Nicky Giusto of Central Milling and he told me the blend uses three types of flour:  00 Normal, Type 85 (T-85), and Pumpernickel.  The mix of 00 Normal and T-85 is the rustic Italian “bit” because Nicky uses that blend for his ciabatta; the Pumpernickel is the German “bit,” which makes it Germania (the word “German” in Italian).  I love it!

There is definitely a rustic, country quality to this dough.  I added some whole wheat flour to the pictured batch to enhance that even more.  On top of that, if you’ve tasted the Firestone Double Barrel Ale, you will find the same flavor tones in the beer.  So, I’m interested to see how this all comes out.  As a sort of contro batch, I also am making the dough without the whole wheat to see the difference. 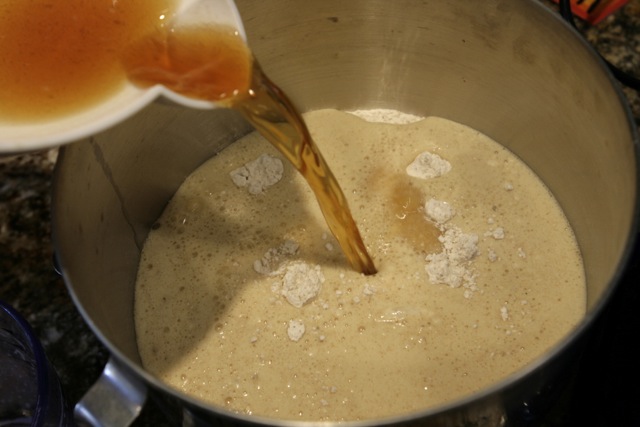 Bottoms up! It sure looks good when you pour a beer into the dough as it foams up!

The dough is based on Peter’s Country Pizza Dough, which is another great home pizza dough!  If you saw my previous post, where I made a similar dough with the addition of some mesquite flour, you’ll see I’ve adjusted my liquids a little.  This time the dough handled more easily.  I did a couple of stretch and folds after mixing, and popped the doughs into the fridge to allow them their own sweet time to get ready for some baking action.

I reduced the oil to 1 tbsp instead of 2, because the dough absorbs plenty more oil from the counter as I rolled it and stretched it and folded it.  I also wanted to manage the stickiness of these doughs for ease.  It’s a little easier for me to add more liquid, if needed, than it is to add more flour to find the right balance (though Peter says he finds it easier to add flour to a sticky dough than water to a stiff dough, so I guess you’ll have to decide for yourself) .

A Brew in Germania – The Pizza Dough

*Alternatively, I made a second batch and only used the Germania Flour (24 oz).  *See photos for the two examples. 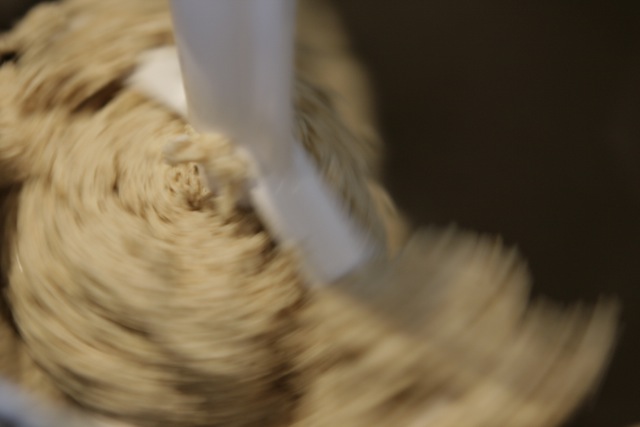 I pre-mix the dry ingredients before adding the liquid.

Combine the dry ingredients in the mixing bowl and mix with a spoon.  I like to do this to make sure the ingredients are well distributed before adding the liquid.

Add the olive oil and honey, if using, followed by the beer.  (Note: At about 10AM it was too early to have a beer during my dough-making session, but I would be lying if I didn’t say I did taste the beer a few times as the doughs came together.  Again, it’s an interesting connection when you taste how similar the flavor profiles of the beer and the dough are.  There is a distinct yeasty nuttiness that comes across your tastebuds, once with a pinch of the newly formed dough and then again as the liquid beer washes through the scene.  After all, beer is liquid bread — as they say.) 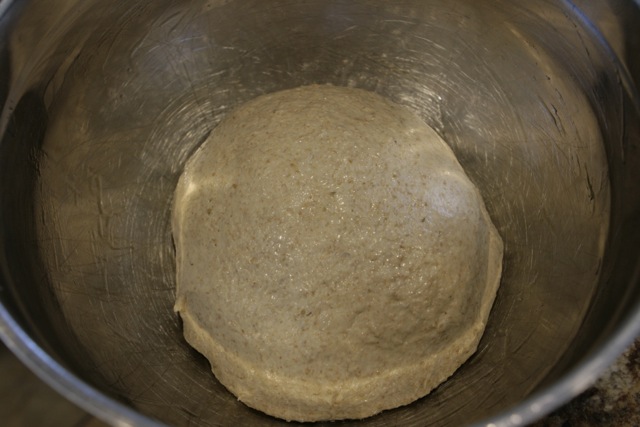 After a few stretch and folds, it goes into an oiled bowl and is covered and placed int he fridge.

Mix for about 1 minute to get the ingredients to come together.  Let the dough rest for about 5 minutes and mix again for another minute until it’s a relatively smooth ball that has come together.

Transfer the dough to a lightly oiled surface/counter.  With a little oil on both the counter and on your hands, stretch and fold the dough into a ball and let it rest for another 5 minutes.

Then, stretch the dough again and fold it.  Stretch it another direction and fold it onto itself again.  Do this a few times and form the dough into a ball again.  Place a bowl over it and let it rest for another 5 minutes on the counter.

Repeat this process 1 more times, maybe 2 depending on how it’s setting up.  It will become more firm and bouncy each time as the gluten begins to form.

Finally, form the dough into a ball and place it in an oiled bowl and cover with plastic wrap.  Put the covered bowl in the fridge overnight for best results.  Make sure to take the dough out of the fridge about 2 hours before you want to bake and form it into dough balls.  In a rush, I will set a cold dough by my oven and try to get it to warm up a little quicker, but it’s best to just let it come to room temperature on it’s own. 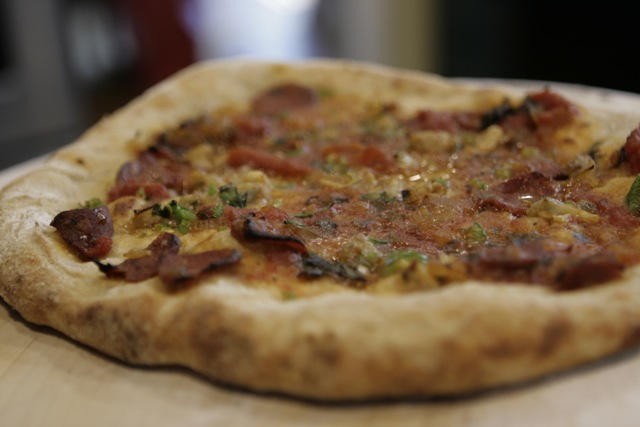 I used this dough for my Redondo Marina with Clams Pizza. It came out great!

Note: If you prefer, divide the dough as soon it is finished the last stretch and fold it into about 4 or 5 dough balls and place each ball into an oiled zip-lock bag, and they can go in the freezer for a few months.  To use these later, pull them out of the freezer the day before you want to make pizza and place in the fridge.  If making pizza that same day, you can, instead, place the frozen dough in the zip lock on the counter and allow a few hours to thaw.  I would guess about 4 hours would get you close.