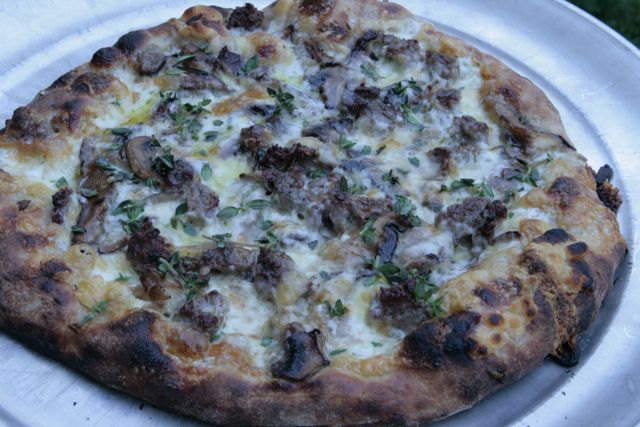 1st Pizza done on the grill…

You saw the making of the the first pizza in the original pictorial.  I continued on, making 2 more pizzas since you can never just make one pizza anyway, right?!  But, the reason I split this pictorial up was because I sort of stumbled on something interesting.  I have had great results with the Forno Bravo pizza stone in my convection oven (which I posted about previously).  I also use a second stone on the top shelf, which helps retain the heat from above and can even be used to cook a second pizza as you alternate between stones, because the pizzas actually suck the heat out of them as you place a cold one in.  I usually tend to cook my pizzas between 8-10 minutes in the oven.  I’m very happy with this set up and have gotten great results that continue to get better.  Even still, it is nothing like the pizzas coming out of a super hot wood fired oven, as we all know.

I was thinking about the earthiness of this pizza recipe – covered in lamb sausage with added garlic and fresh fennel and sauteed mushrooms, or Mushies, as Jay calls them.  I also thought I would try this on Peter’s Country Dough, which I thought would really go well with the cheesey/earthiness of this recipe. And then, I finally decided I would make one or two of the pies on my grill – which seemed at least a little more rustic. 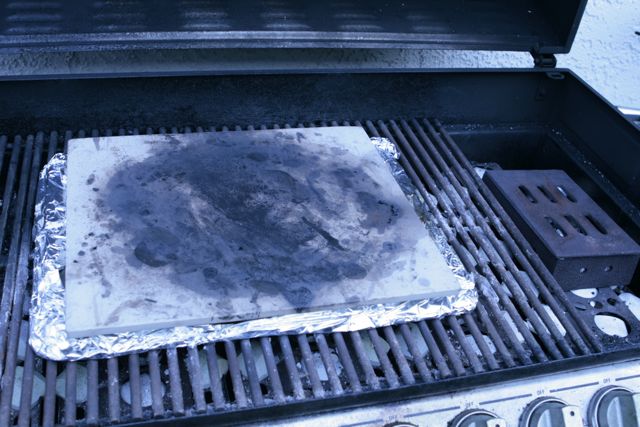 While I was pre-heating the inside oven, I turned on my grill.  I placed a pizza stone on an inverted baking pan covered in foil to protect the pan.  I have read on the FB Forum that a pizza stone placed straight on a grill would likely crack.  So this was just a precaution.  As I was turning on the grill I noticed my iron wood-smoker box sitting on the side of the grill.  A light bulb went off (I have to confess, it wasn’t a green one, I’m still thinking in incandescent brainstorms): “Why not use the box and see if I can bring some smoke into the picture here”. I’ll do this when cooking up certain things like a Santa Maria Tri-Tip and it works beautifully. 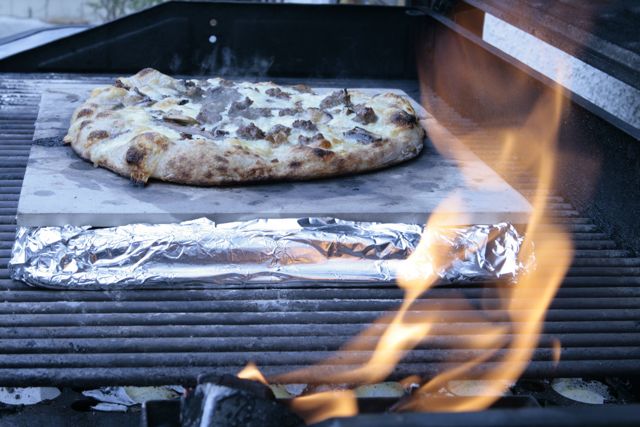 I let the grill heat up for a long time to get the stone up to temperature while I was making the indoors pizza and taking photos along the way.  When I came outside, the grill was raging.  I had put some wood in the box, but not turned on the burner that it sat on, yet the wood had been consumed.  So, I put in some fresh chunks of apple wood, which is what I had around for use in my smoker.  They soon took to smoking and then flaming.

I cooked this next pizza. 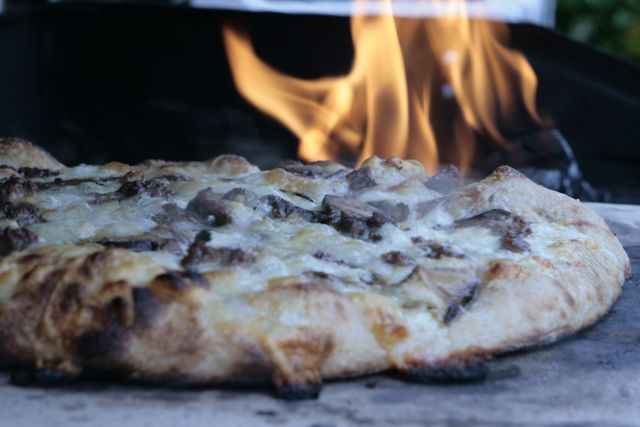 It seemed to go pretty quickly and you can see it got some serious char on it compared with the oven.  Check out the steam coming off the pie in the picture above on the right.

I cooked the 3rd pie with the leftover ingredients.  I timed this pizza and it was just under 6 minutes.  The grill was hot!  The temperature gauge was off the chart.  I don’t know how hot it got, but the white ceramic coals built into the grill turned green by the end of all this.  Does Green Heat come after Red Hea?  Can I take credit for this new discovery? 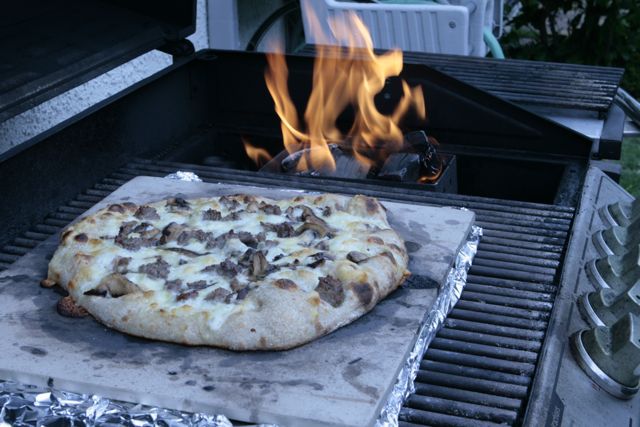 This was a really fun addition to my pizza making process.  It is definitely something I will be playing with in the near future.  I was able to put the pizza together with more elements that I think enhanced the flavor and certainly the fun and experience.  I can’t wait to get a real wood fired oven, but this definitely brought some of the benefits of those ovens within my grasp. 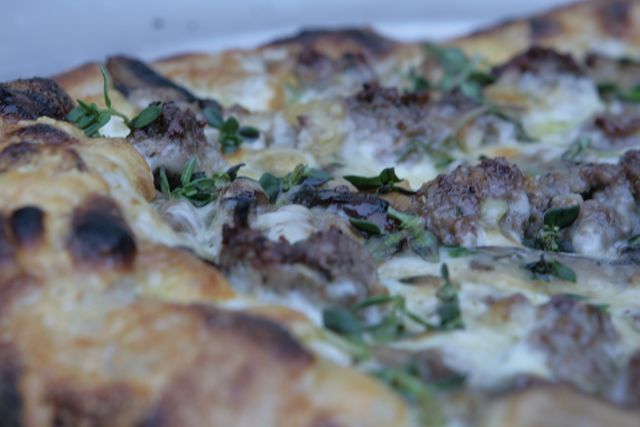 Again, I want to thank Jay Buonchristiani for the delicious Lamb with Fennel Sausage and Mushroom Pizza recipe.  This one moved right up to the top of my list.  My wife and daughter, who don’t even like lamb, loved it!  I do have to admit though, when my daughter asked what was on the pizza and the words, “lamb sausage and mushrooms” entered the room, I ended up having another half of a slice to eat instantly!  But, she did love it first, before she knew what was in it!  Here’s PROOF! 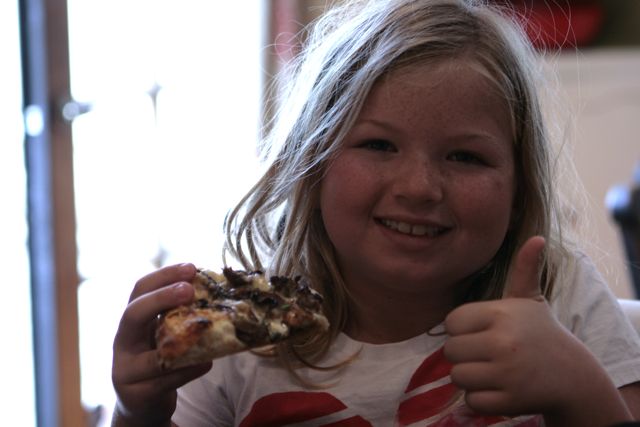 Let us know in the Forums, Comments, or email if any of you have any more ideas on using the equipment you have to enhance your cooking experience.

The other day I put a 3/4″ stone on the grate of my 6 burner 60,000 BTU “Summitt” Weber grill. To best emulate an oven I heated the stone up to 600 and when I placed the pie on it I turned down the 2 burners beneath to 50% and kept the other 4 burners at 100% – oh, and I left the infared burner above on hi. This kept the stone close to 550 and the air above it hot enough to make it cook properly. I would guess it took about 6 minutes to cook. I used 50% KA bread flour and 50% Caputo 00. It came out awesome. I would like to try it hotter but Im not sure I can keep the air above the pie high enough without insulation.
Caio