Creating Steam in a Brick Oven

Without steam in your oven, your rustic hearth bread will never have the appearance, volume, and crust you want.

Commercial wood fired bakeries in Europe commonly have steam injection systems to manage the look of their bread and ensure proper crust development and caramelization. This type of system is out of reach for home bakers, and even for most micro-bakeries. However, that does not mean we can’t get good results with much simpler methods.

When our oven hearth is fully loaded with bread, the dough itself creates a fair bit of steam as it bakes, but it’s usually still not enough.

Here’s the procedure we follow. It has proven both successful and consistent.

Baking Science: How It Works 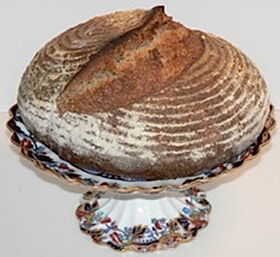 Multi-grain breads made with a wheat sourdough starter do not rise as high as loaves made entirely with hard, unbleached bread flour and a white leaven. However, the loaf volume shown in this example would not be nearly as great without the oven spring produced by steam in the baking chamber.