Written By Peter Reinhart
Tuesday, 12 September 2017 Interviews
Note from Peter: I first met Chris Bianco just before he burst on the national scene, sometime back in the late 1990’s. One of my baking students was from Phoenix and told me about him and, when I went to Phoenix for an IACP Conference and needed a place to bake breads for a presentation I was making, my student said, “He not only makes the best pizza in Phoenix but also the best bread. You should call him.” She was right about the bread but, and who knew at the time, his pizza was not only the best in Phoenix but, as word got out and even the James Beard Society noted (along with writers like Jeffery Steingarten and pretty much every food writer and, as many of us now know, even Jimmy Kimmel), perhaps the best pizza in the USA and, OMG, maybe the world!  Regardless of where you stand on that declaration (which is clearly something that makes Chris very uncomfortable), there is no doubt that he has become the poster boy of what I’ve called, both here and in my books, the Artisan Pizza Movement, establishing new benchmarks for what simple pizza can be when executed at the highest level of quality and craftsmanship. In my 2003 book, “American Pie: My Search for the Perfect Pizza,” I interviewed Chris and, when I asked him about tips and secrets that he could share with other pizza makers, the following quote became the single biggest takeaway from the book: “The secret is, well, it’s me. I’m the secret. It’s my passion, my energy, my commitment. I can’t bottle that and give it to someone else. Maybe someone else has the passion and talent and I could teach them, but, really, there aren’t too many people who feel the way I do, who care as much as I care.” Fifteen years later, I feel as if Chris is still hitting his stride, still growing as an artist and as a person, and his new book, “Bianco: Pizza, Pasta, and Other Food I Like,” helps us to better understand the way he feels and why he cares as much as he does. We recently caught up with each other and explored this further. Enjoy our conversation and keep tracking this guy — somehow I feel that a lot more is yet to come…. 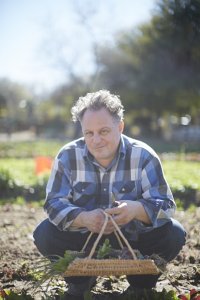 Peter (PQ):  Chris, thanks for doing this interview with us. It’s been such a joy watching you grow and succeed since we first met almost 20 years ago. Between your new book, your restaurants, television appearances, and your various products you are one busy guy. Most of our followers know of you and, maybe, a little about you, but for those who are new to our little pizza universe and readership, would you mind giving us a short recap of your journey? How you went from a young East Coast guy to become the pizza rock star of Phoenix and beyond? At least the Reader’s Digest version?
Chris:  Well I don’t know about any of the rock star stuff. I feel I have as much to prove now as I did back then.  I ended up in Phoenix in 1985. I was just looking for a place to call home and the people here were nice enough to let me stay. I was able to scratch out a living by making mozzarella out of my apartment. Then I had a little catering business making pizza and pasta which led to first little Pizzeria Bianco in 1988. And the rest I guess you can google, if you’re bored.
PQ: Or, I guess they can read the book.  I know what a humble guy you are, not prone to tooting your own horn, but success like you’ve had is only partly a result of good luck and good timing. There is a lot of intentionality at play also. What do you think are some of the guiding principles or, perhaps, philosophical ethics that helped shaped your life and success?
Chris: The thing about the humble part is I find life is very humbling.  I think that, when we allow ourselves to have real conversations about fears and vulnerability, valuable truths come out. My principals were pretty simple. I didn’t even know that I had a a specific concept. Pizza is something I just did. My first job was at a pizzeria when I was 13 – dragging bags of flour from the basement to the mixer upstairs.
My ethics come pretty much from what my family instilled in me —  work hard and don’t be an asshole. And I share the PG version of that with my kids. Playing well with others, well, that’s the only subject I did my homework on every day.

Life itself is the relationship business whether it’s family, friends or our environment. We try to show gratitude for time spent on earth and the opportunity to make it,maybe, even in the smallest bit better than we found it. 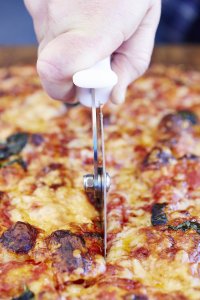 PQ:  Who were some of the mentors or guiding lights in your journey, and what did you learn from them?
Chris:  Most of my mentors have come for the most unexpected places.  When I was a kid there was a crossing guard named Dutch. And Dutch was always a powerful man because he could stop traffic and let me get where I needed to go. He helped people find their way.
As for the cooking mentors, well the easy ones are my mom and my aunt, who I spent a large part of my early years in the kitchen with. As far as being inspired by cooks, Alice Waters and Jean-Louis Palladin are at the top. And there is really an endless list of others. The opportunity to evolve still presents itself daily, so my inspiration today could be from doctors working tirelessly to cure this world of cancer, and architects that look to build roofs over our heads that will last generations.
PQ:  Now that you’ve written your first book, and it’s far more than a pizza book, can you explain what you hoped to convey in it and, also, if you see the possibility of writing more books in the future?  Are there still things you want to say? And, also, why do you think your work, or message, has had such emotional resonance with folks, even beyond the world of pizza?

Chris:  Excellent question.  As you well know it took me many years to realize people would want to read what I had to say.  I got to a point of self-confidence that how to explain making pizza actually had so little to do with making pizza. So the book itself gives a basic understanding of that process. It is my first book and it was an opportunity to write about pizza, pasta and other food I like.  So the book was a chance for me share some recipes that I hold important — some family recipes and some principles of how make a salad or how I revere my mother’s meatballs. 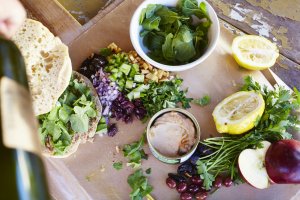 When I get old recipes, the thought that my house can smell like your house and my grandma’s house, well that sense of time in our lives and a bit of aromatherapy as a reference personally fascinates me. I thought there would maybe a few people that might dig that too.

Also, I have hundreds of cookbooks that inspire me. I love that they are tactile and my own personal mosaic of ideas. I thought if my book could be a raindrop in that ocean, of coloring that scene, that they might see pizza as a great bread, only flattened and put in harmony and balance with other great ingredients. 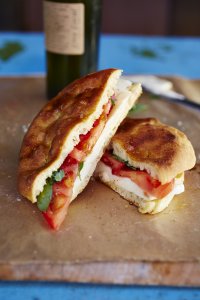 PQ:   Where do you see yourself in, say, 5 years from now? Or 10? I guess this is more like a legacy question—what do you see as your most lasting or important impact on others, in either the pizza world or the world at large?

Chris: That would assume that I have an actual plan.  Pretty much my life has been responding to the situation presented.  In 5 years, well, my hope will be to spend as much time with family. I hope put my life in the same balance that I’ve that I worked so hard to put in food.  I urge other young chefs every day — do as I say not as I did. Putting life in balance is something I can’t stress enough, the importance of that. 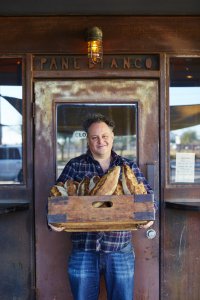 “That would assume I have an actual plan….”

Whether it’s today or next week or in 10 years, I hope I am doing things that matter.
PQ: Bringing things closer to present times, what are some of the immediate projects you’ll be working on and with whom will you be working? You seem like a natural collaborator when you find kindred spirits to create with.  I’m thinking of the Tartine Manufactory project in LA, for instance, with Chad Robertson. Anything else on your to-do list along this line?
Chris:  Man this will be a big chapter. We are working on so many things internally to make our current restaurants better. From new milling techniques to grain varieties and farming practices, I work with our farmers and millers trying to go deeper into what makes good food good. Looking at anything I jump into whether it be music or food; is it only a good guitar that makes the song good or is it the practice and intention someone puts into it.
With Chad (Robertson of Tartine), in downtown Los Angeles, we are delving into some deep and exciting stuff – milling grains, pressing olive oil, and other sourcing of ingredients.
Of course, our tomato company, Bianco DiNapoli, is something that, along with my partners Rob DiNapoli and Scott Park, we are continuing to share with people. These are tomatoes that I am extremely proud of as they come from such good earth.
I’ve learned so much more about tomatoes that, before, I only thought I knew something about. I did know what tasted good and where they came from, but I’m still fascinated by how we can affect them deeply through crop rotation, dry farming and the packing process. What I’ve found in the last 10 years is that something that tastes good and is nutritionally at its highest level, due to proper farming practices without compromise, allows us to receive food that is not only red and ripe, but with a rooting system that finds all the nutrients that mother nature intended.
PQ:  Speaking of rooting, you know how much we are all rooting for you. Thanks so much, Chris, for all you’ve done, especially for setting a new bar of excellence that has inspired so many others. I can’t wait to see what else you will accomplish over the coming years. 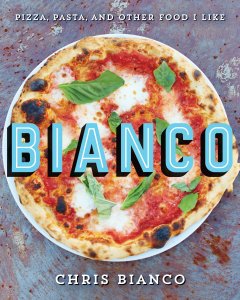 The book — now, let the next chapter begin….