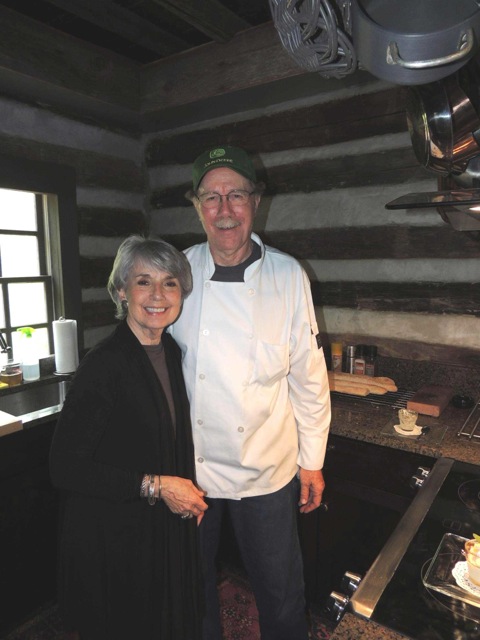 Like Mikey in the old cereal TV commercial, here in the South, when it comes to tomatoes it’s often a pleading, “Try it, you’ll like it.”  That’s because down South, leafy greens and butter beans take center stage, leaving tomatoes relegated to salads and canned spaghetti sauce.  I first had to decide which tomatoes to buy. Heck, why would you buy them, when you can grow them -– right?  I’m sure most of you aren’t looking to hold a tomato taste test, but that’s what I did.

In 2004, I ordered 18 different plum and paste tomato varieties of seed, with enticing names like Cour di Bue, Costuluto Fiorentino, Opalka, Polish Linguisa and Viva Italia. Can’t you just taste those beauties? I planted the seeds, transplanted and secretly labeled the rows and, about three months later, sand-bagged Nick Thomas, a food writer at the time for the Raleigh News and Observer, into a blind taste testing of the lot by promising him exclusive rights to the story. I also arranged to take several baskets to a local Italian restaurant (since closed) to make tomato sauce.

Well, what do you think happened?  Nick concluded that San Marzano’s were the best. Yet, although he loved those varietals, the restaurateur found it was too much trouble to cook them down. 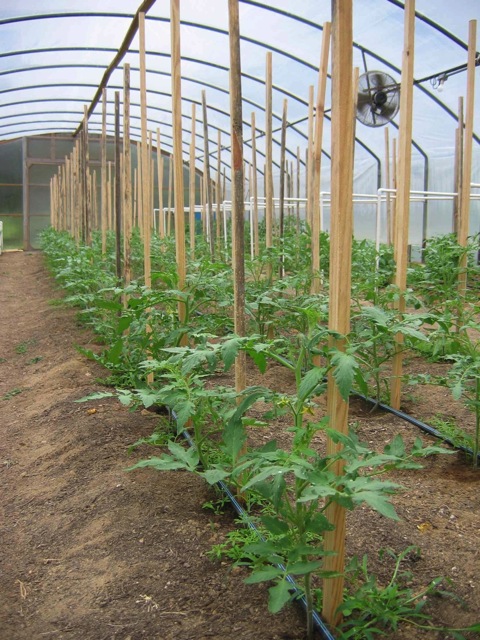 Subsequently, I experimented by growing different strains of San Marzano’s, but just wasn’t happy with the taste. I grew them outdoors; I grew them in a greenhouse; I tried different organic approaches with fertilizers and irrigation schemes for watering. Forgive me, again, but I cussed a lot – thankfully, no one was nearby (well maybe Kerry, my wife).

I can grow tomatoes, but the soil and climate here just isn’t their favorite. Then I realized, “Wouldn’t an agricultural state like North Carolina be growing tomatoes instead of tobacco, cotton, soy beans, wheat, sweet potatoes and collards if it could?”  Dah!

Alas, I finally understood what terroir meant. It certainly has nothing to do with North Carolina being an English Colony instead of a French one. Terroir is the set of special characteristics that the geography, geology, and climate of a certain place, interacting with plant genetics, express in agricultural products. Wine connoisseurs know it permeates the grapes. It’s simple: Italian tomatoes have terroir, and my Rocky Ford tomatoes do not! Italy’s San Marzano tomatoes simply taste better!

It’s embarrassing for me to admit how much time and effort I wasted trying to grow this crucial ingredient for my Tomato Pie.  What had seemed like a sensible idea was,in fact, a big bust! But you only learn from your mistakes. Chef Sean Brock on the “Taste of a Chef” would have been proud of me, but I can see the tears of laughter coming down his face, and hear him howling as he reaches for another brew. Always use the food ingredients that taste the best. 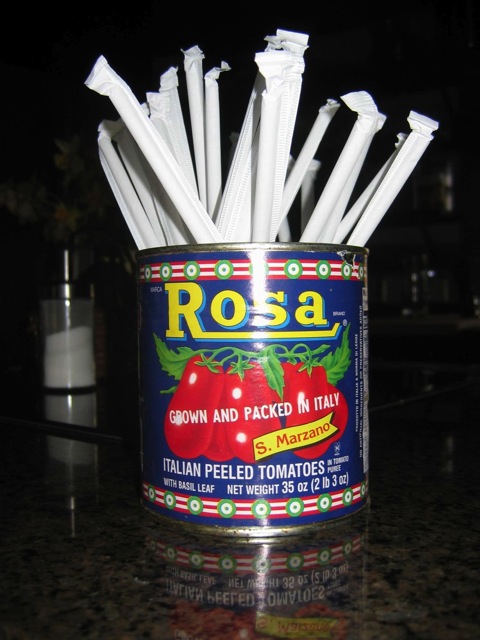 So, we now buy imported San Marzano Tomatoes from Italy by the case each month, from Philadelphia of course, when Kerry travels there for work. The Rosa brand we use are imported into Philadelphia and Baltimore, while the Cento brand is available in Camden, N.J., just over the Ben Franklin Bridge. They are always intrigued when Kerry arrives at the warehouse as their only North Carolina customer yet who always gets their “best” cash discount price (of course). By the way, I also have to admit that these imported tomatoes cost less to buy than if I were to grow them. (Wow, will I be happy to finish telling you my tomato story.)

Each can is opened, the fruits individually cleaned and broken into pieces, and then adjusted with sugar (if need be). Every can tastes different – I adjust each can separately and then combine the tomatoes together. Handling and cleaning each fruit is usually deemed unnecessary by everyone else. Yet I always do this! (Maybe it’s just the training I received at Jack’s Firehouse, the many hours I spent picking crab, cleaning squid, and de-boning salmon.) No other spices or seasoning are added; no salt or pepper nor any olive oil. I like to prepare my tomatoes a day ahead and refrigerate them overnight. They simply taste better this way. “Last-minute” tomatoes just lack the flavor I want. I always return the tomatoes to room temperature before using them.

Yes, this is a Tomato Pie: it’s all about the bread and the tomatoes. The care I take with the tomatoes seems in keeping with their overall importance. What do you think?

Now, let’s talk about cheese. I was going to discuss cheese later, but after my tomato-growing debacle, I decided to continue my confessional and get my embarrassing stuff out of the way. Does this introduction sound familiar? Heck, why would you buy cheese when you can make it – right? Try to contain your laughter, as it can become contagious. 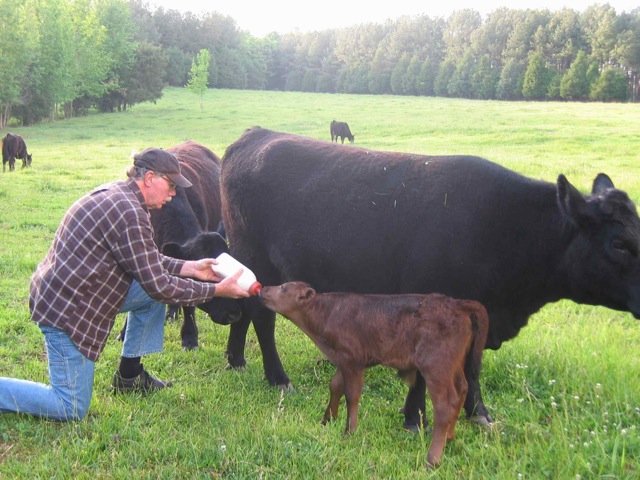 Before setting out to make cheese, I had to decide exactly what type of cheese I would use. Obviously mozzarella, but low-fat, skim, part-skim, whole milk or what? After cooking pies with them all, I found that whole milk was the only one that did not separate on the pie. Hands down, always buy whole milk mozzarella! I have made pies with both fresh cow’s milk and buffalo mozzarella but the cost and softness usually rule them out for me because I am typically making about 40 pies at a BreadWorks Event. For a small family affair, though, cost is not a factor.  Since I always slice my cheese and never grate it, I buy 1-pound blocks, the firmer the better. I always keep it refrigerated and cut it while it’s cold into thin (less than 1/8”) slices. I usually find that I can prepare about 5 pies per package.

I want you to know, though, that it really is easy to make your own mozzarella cheese. For a modest investment of $25, you can buy a kit that includes a dairy thermometer, muslin, citric acid, vegetable rennet tablets and cheese salt – and you are ready to go. (I like to shop online at the New England Cheese making Supply Company www.cheesemaking.com.)

Life on the farm…

A gallon of milk will make about a pound of mozzarella. The big problem is finding and buying good whole milk. I own beef, not dairy cattle, so no advantage there. I am not about to get a dairy cow and have one more thing I have to do every day (milk the cow). The sale of raw, unprocessed milk is illegal in most states. Folks get around this by owning a share of a milk cow, and therefore technically are not selling the milk, but own it.

When I was a kid, we still had milk delivered in glass jugs to a milk box on our side porch. The jugs were sealed with a paper disk. When it was below freezing outside, the cream would rise to the top and push the lid off. When it was spring you could taste the field “onions” the cows were eating in the milk. The milk was rich (high butter fat content) and the kind that you wish you could find today to make cheese – but good luck! Buy the least homogenized and pasteurized milk you can find; it works better for cheese making.

Actually, I was quite successful making mozzarella and would recommend you try it. I just found that the cheese I could buy saved me a lot of time without sacrificing taste. I do however sometimes make special flavored mozzarella with basil and assorted herbs which add a unique layer of flavor to the Pie.

So maybe I was being a bit paranoid, dreading the discussion of my experiences with cheese. I just so much wanted to be able to tell you to “make your own bread and cheese, and grow your own tomatoes.”  Is that so weird?

Oddly enough, my best old Confederate friend, Joe Elmore, recently gave me a book titled “Weird New Jersey.” The thought of it makes him laugh out loud every time. I know he’s really laughing at me, but that’s OK, I find him pretty funny too. I haven’t found the “Weird North Carolina” book yet, but it’s got to be out there somewhere!

I hope you’ve enjoyed this posting.  Come back for my next installment, “A Match Made in Heaven,”  where I’ll discuss toppings. Get ready to laugh and hear about my “ace-in-the-whole”.

I enjoyed your article. What do you mean precisely by “the fruits individually cleaned and broken down into pieces”? Do you rinse them? Seed them? Do you discard the juice they are packed in? Thanks again!

Michael – I use a paring knife to remove all skin, stems, unripe parts etc then cut the fruit in half and drain/discard the watery juice – I don’t worry about the seeds – if they stay or go – I do not rinse the fruit – this is just hand work over a sink – I break/cut into large lengthwise pieces (see photos) and accumulate in a glass container which I adjust with sugar as needed for each can. I do save/add the paste from the can to the product, but discard any basil. I transfer the product to a poly container (never metal) with a lid. I have not been taught this, and work alone in a rural area and just try to do what gives me the best results – does that answer your question? if not, ask again – no problem – just sharing what I do and explain why. I am more into the why? of baking/cooking – maybe the engineer in me – Bob

I additionally bag the chicken I purchase and lay it in a bit of the cart away from any other items I buy comparable to bread, lettuce or other vegies.