Guest Column: Tomato Pie and “The City that God Forgot”

Note from Peter: I’m still working on my recap of the recent Pizza Expo in Las Vegas so, in the meantime, I wanted to share this very insightful post from guest columnist Joseph Calcagno, on the venerable tomato pie. Some of you may recall a series of columns we ran a few years ago by another one of our columnists, Bob Radcliffe, on the same subject (if not, you can track them down in the Guest Column archives section). But Bob discovered his passion for tomato pies in Trenton New Jersey (like so many others of us), whereas Joseph fills us in on a whole other rich vein of tomato pie intensity, as you will see below. So, thank you, Joe, for expanding my horizons and for writing about it so eloquently. Here it is  — enjoy!!

UTICA – Home of the Tomato Pie

“The city that God forgot”

This was the moniker I found when researching the next destination of my lifelong pizza quest: Utica, New York. Undeterred, I traveled west along the Mohawk River in central New York and down into the Mohawk Valley, gazing at the snow covered mountains as the swan song of winter faded into the background of springs crescendo.

The streets of Utica are a bit weathered. It’s a blue collar city that’s struggled, plagued by a dark history of political corruption and economic hardship. It has been coined a Rust Belt city, due to the decline of the area’s industrial sector in the latter half of the 20th century. Amidst the hardship and poverty that exist within some parts of Utica, however, an inspiring identity has been quietly growing past city limits throughout the years. This identity has made Utica famous for the right reasons and one in particular – the Tomato Pie. 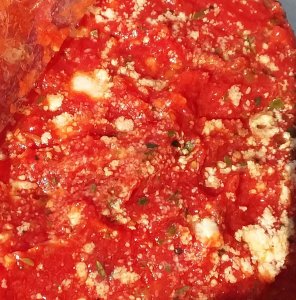 The Tomato Pie in Utica is intrinsic to the local sense of cultural identity.

As I familiarized myself with the regional vernacular, I graduated with a degree in Tomato Pie. This isn’t pizza (even though this is Pizza Quest, just trust me on this one). It would be an insult to Utica to call this pizza. This is Tomato Pie. You order it as “Tomato Pie.” This is the no frills, unpretentious, leather-jacket-wearing older cousin of pizza. Better put, the Tomato Pie is the Rocky Balboa of pies – the underdog champion who is a regular neighborhood guy.

And this is what has been keeping Utica alive and well fed over the years. A far cry from the pies seen at the picturesque, trendy pizzeria shops that celebrate different regional styles and push the culinary boundaries of pizza into a melting pot of flavors. Utica is fiercely authentic. They only need a few bold, hard-hitting simple ingredients to deliver the knockout.

So what is the Tomato Pie?

A thin and chewy crust, topped with an extra thick layer of sweet and tangy slow-cooked tomato sauce and finished with a light dusting of Pecorino Romano cheese. Give or take a few variations, that’s the Tomato Pie. Elegantly simple. Baked in a seasoned pan and served only at room temperature. I can’t romanticize it any better than that but I can guarantee you’ll fall in love at first bite. 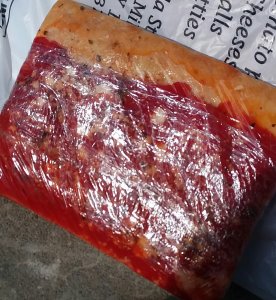 As sold in the deli — always served at room temperature!

The Tomato Pie in Utica is almost always a secondary item to the vast assortment of Italian goods a bakery has to offer, reminiscent of the way Italian immigrants introduced pizza to America. I ventured into a few of the local Italian bakeries where it’s sold and embarked on a delicious journey.

“I just got back from a funeral,” said one patron as he exchanged pleasantries with the man on the other side of the counter, behind a curtain of provolone. “Third one this week, can you believe it?” Just making small talk as he moved quickly on the line that wrapped around the store, while the clerk kept working and acknowledged him endearingly. It dawned on me that while the walls may look old in the places around here, they’re marinated with a rich history of stories, mumblings, and anecdotes like these that have created a sacred space for the people of Utica who call places like these home.

I savored every bite of my Tomato Pie in the parking lot of each place I went to, watching an endless parade of people come and go. I listened to the sounds of birds chirping as my palate tried to identify each note of flavor bursting through. 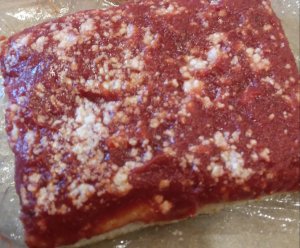 It’s all about the sauce!

The tomato sauce was unlike anything I had ever tried before. It was the star of the show and wanted you to know it. The perfect amount of sweetness to acidity, and ever so slightly touched by the salty sprinkled Pecorino Romano cheese. While pizza manifests as a holy trinity of balance in flavor and texture between the sauce, cheese and crust – the sauce on the Utica Tomato Pie creates its own rules and makes sure everyone else plays by them.

I tried to wrap my head around it as I created an entry for Tomato Pie on my personal Pizza Quest. Certainly the pies are admired much differently, yet they’re so uniquely and importantly intertwined in the history of Italian-American cuisine.

“A staple at every party,” said one Utica resident when asked about what the Tomato Pie meant to Utica. “It was always on the table every Sunday when I was growing up.” 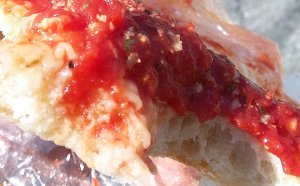 But also about the balance between sauce and crust.

And that’s where it all made sense to me. People don’t forget traditions like that. It’s one that goes back thousands of years, throughout the history of mankind, no matter where you’re from. Food has long been known to have the innate power to bring people together, shuffle off their mortal coils and define an entire community – giving a Pizza Quest a moral and magical compass to follow.

The birds continued to sing that afternoon with melodies of hope and new beginnings that accompany each spring, especially after a harsh winter in the Northeast. I listened curiously, mesmerized by the last few bites of charm that Utica had to offer. This too, was a new beginning for me.

“The city that God forgot…” I thought. “…well, hopefully He’s just too busy enjoying a Tomato Pie for now”