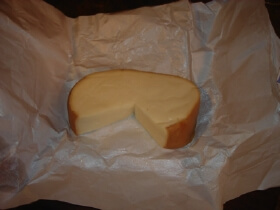 Provola is a fresh, stringy cheese made throughout the year from non-skimmed cow’s milk. The cheese originated in Campania, and there is record that it was made even before Mozzarella appeared in the valleys around Naples. The larger variant of the same cheese is called provolone, simply meaning “large provala.” This is the more common term in the United States.

The processing is similar to that used in making Mozzarella. The milk is heated and rennet is added. The curds are then cut into pieces and allowed to drain in hemp bags suspended from wooden trestles. The curds are left to “work” in the bags for a period ranging from one to three days. The “fermentation” of the cheese is completed when a piece of the paste forms a thread without breaking when it is put in boiling water. The curds are then cut into strips, which are soaked in boiling water and mixed to give the cheese elasticity.

At that point, the “filatura” is carried out, a spinning/stretching operation that can only be performed manually. The cheese-maker takes the pieces and stretches them, eliminating as much of the whey as possible. The cheeses are then plunged into cold water to cool them and allow them to become firm. They are next immersed in brine for a period that varies according to the degree of saltiness desired. Finally, the cheeses that are to be smoked are tied with a raffia cord and hung up to dry for about 10 minutes in a humid, smoke-filled room that is heated to 40-50° C. (104-122° F.)

Provola is a major cheese used by Naples pizzerias. When doing his training at Pizza Consulting, Michael (who spend days and days prepping cheese) noticed that almost 40% of the cheese used in some pizzerias was smoked Provola. Interesting.

The name of the cheese is derived from an ancient tradition, the pruvatura or pruvula. When the full chapter of religious assembled at the convent of San Lorenzo in Capua in the province of Caserta, it was the practice to offer them a taste of the cheese on a piece of bread as a proof or test of its goodness. Provola was the first Campanian cheese with a stringy paste which we are aware of. It often figured in the famous Neapolitan presepi (nativity scenes,) while Mozzarella seldom appeared in them.

The taste can range from quite sharp to mild and sweet, depending on region, ingredients, and aging times. It also comes in smoked and plain varieties and can be found in different shapes (long sausage style, a shorter bottle shape, or in a larger pear shape with a round knob for hanging the cheese.) The aging times for this cheese also vary dramatically (minimum is 4 months, but can extend up to 3 years for the sharper varieties.) Italians typically prefer the sharper varieties, while American provolone tends toward the milder side of the spectrum.