As promised, here’s a recap of my recent pan pizza crawl through Brooklyn and Manhattan, as choreographed by the indomitable Scott Wiener, founder of New York Pizza Tours (and regular contributor here on Pizza Quest). Background note: I am currently working on a book, scheduled for release next year, all about pan pizzas. These include focaccia, schiacciata, Sicilian, grandma, and the increasingly popular Roman and Detroit-styles. On this all day, epic crawl with Scott (an others who joined us along the way) my two main targets were Emmy Squared, which has been garnering national press for their interpretation of Detroit-style pizza, and the iconic L&B Spumoni Garden which, I am embarrassed to admit, I have never visited before. Along the way Scott introduced me to a number of other amazing places, ending our trek in Manhattan at the Sofia Pizza Shoppe (birthplace of the Doughdici pizza (12 hour final rise in the pan), to which I will devote a separate post next time.

I’m going to let the photos do most of the work here, and say thank you in advance to folks at Best Pizza, L’Industrie, L&B Spumoni Garden, J&V Pizza, Villabate’ Alba, Emmy Squared, and Sofia Pizza Caffe, as well as to Fornino (where we didn’t eat but got to see Michael Ayoub’s impressive ovens and commissary kitchen). Also, thanks to Adam Kuban (formerly of Serious Eats and Slice.com), Alexis Guerreros, Jason Feirman (Idreamofpizza.com), Jenny Bello (Pizza a Casa Pizza School), Omar Qadir (The Pizza Man of Pakistan), Tom DeGrazia and Matt Porter (Sophia Pizza Caffe), Massimo Laveglia (L’Industrie), Frank Pinella (Best Pizza), Joey and John Mortallaro (J&V Pizza). I mention them now as a prelude to the following photo journal of our day.

Part of the joy of a pizza crawl (or any similar crawl, whether focused on beer, wine, cheese, or anything else for that matter) is the opportunity to geek out on our shared obsessions and have a rolling, progressive party. Scott and I met at Best Pizza, Frank Pinella’s small slice shop in Williamsburg, where we were soon joined by Adam Kuban, the prolific pizza writer and, now, creator of Margot’s, a periodic pop-up proto-type that expresses his love for classic bar pizzas, and that may someday soon manifest as a brick and mortar restaurant. In other words, he’s not just writing about pizza but also walking the walk. From there we just kept adding to our crew, as you will see below. And remember, this is just Part One, the Brooklyn portion of the day. Next time I’ll focus on Sofia Pizza Caffe in Manhattan, and offer a commentary on my overall impression of this amazing pizza crawl with Scott and the gang. As always, it not just about the pizza but it’s really about the quest….. 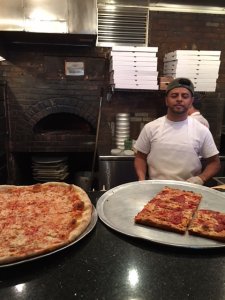 Frank Pinella, who also hosts the Pizza Show on Viceland TV, wasn’t there this day, but his pizza guy did a great job with both the round slices and the Grandma-style pan pizzas. Scott reminded me that it’s always best to ask for the squares to be re-heated to crisp up the crust. We tried them both ways and, for sure, he was right — the re-heat takes them to another level. 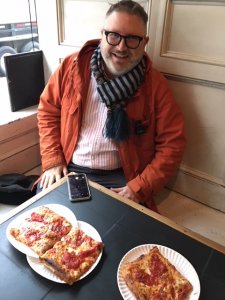 Adam Kuban about to indulge in some squares at Best Pizza (you can see how the reheated slices (the ones to the right), were clearly going to be crisper, which I think is the hallmark of a great pan pizza of any style. 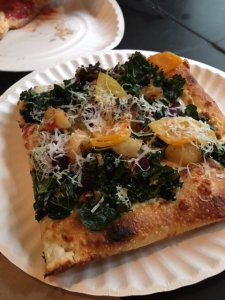 The Seasonal Fresh Veggie Grandma at Best Pizza. I really liked this square, which changes, naturally, with produce! 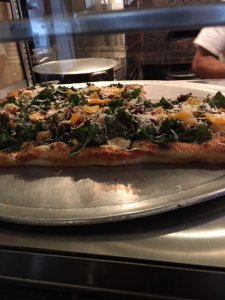 The Fresh Veg Grandma at Best Pizza in Williamsburg, Brooklyn. Not as thick as a Sicilian or Detroit-style, but a great platform for any kind of topping. 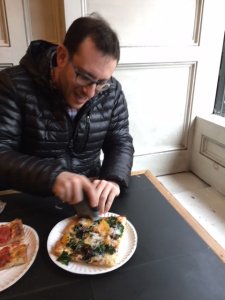 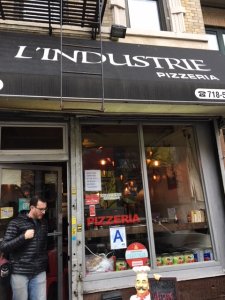 L’Industrie, excellent slices and Sicilian squares in Williamsburg, a hotbed of great slice shops and pizza of all kinds. 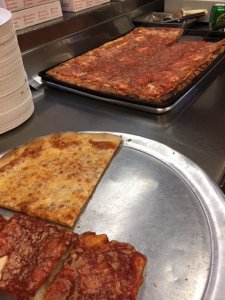 Round  slices or pan squares? You can get them both at many of the Brooklyn pizza shops. 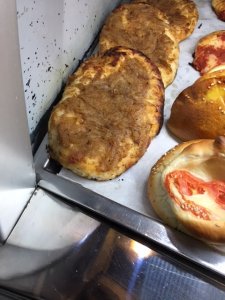 Sfingiuni (the Sicilian forerunner to pizza as we know it) at the impressive Villabate’ Alba Bakery on 18th Ave. in Brooklyn. This version is made with a topping of caramelized onions, garlic, and anchovies. 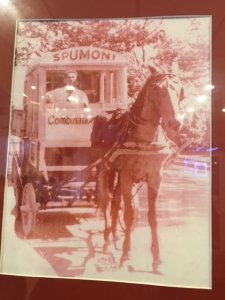 L&B Spumoni, it all began with the spumoni — the pizzas came later. 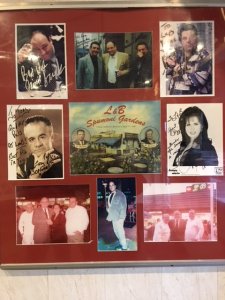 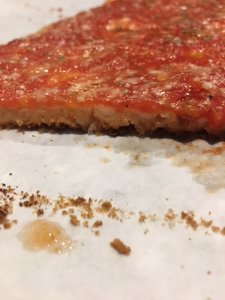 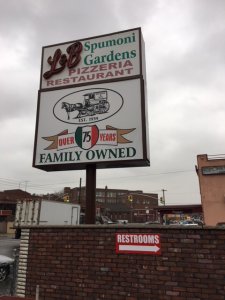 The iconic sign, still owned by the Barbati family. 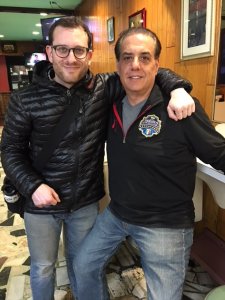 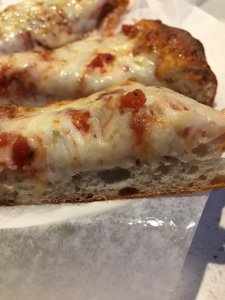 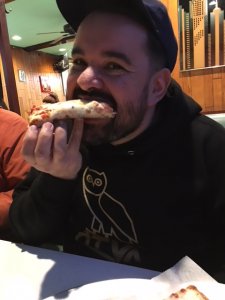 Alexis Guerreros (who, by the way, is not only a tour guide for Scott’s Pizza Tours, but also a well-known stand-up comic — check him out on YouTube). 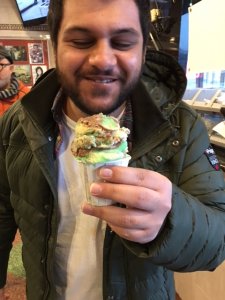 Omar and his spumoni at L&B.  Omar headed back to Pakistan a few days after this pizza crawl to open his own pizzeria. Scott dubbed him, “The Pizza Man from Pakistan” which soon became, “Pizza Pak-Man.” 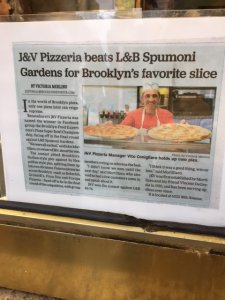 J&V is quite proud of this headline. Rightly so. I actually prefer their Sicilian over L&B’s, because the crust is more airy while still retaining a creamy texture and good snappy under-crust. 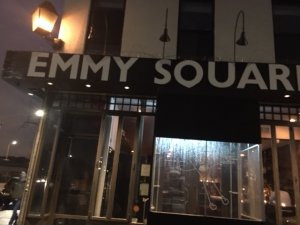 Emmy Square, in Williamsburg, raising the profile of Detroit-style pizza and garnering national attention in doing so while expanding the Emmy brand (aka Emily, of the husband and wife owner team of Emily and Matthew Hyland ) with new locations in Manhattan and even Nashville 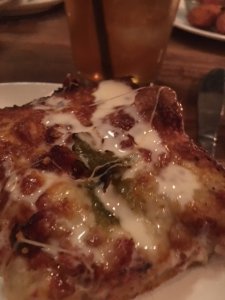 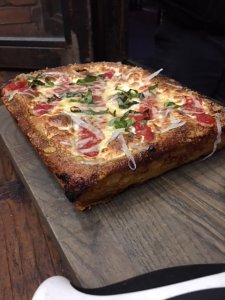 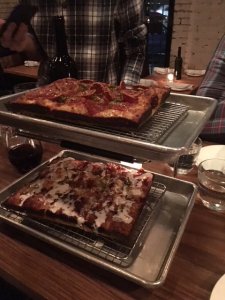 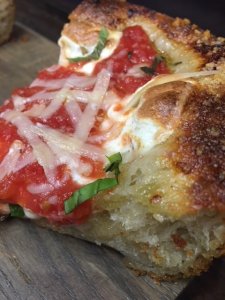 A great combination of buttery, toasty under-crust, a cheesey “frico” side crust, and a creamy internal crumb makes any topping a bonus in a well-executed Detroit-style pizza like this one at Emmy Squared. 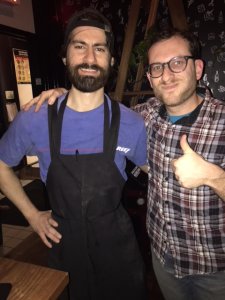 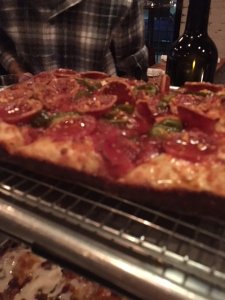 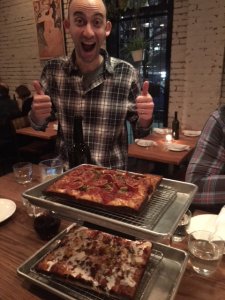 IDreamofPizza.com’s Jason Feirman, exulting over our “Roni Supreme” and also the “Hatchback,” featuring hatch chile peppers, chorizo, and a cream sauce!  Jason’s website is a must visit for any true pizza-freak (like those of you reading this) — his passion for pizza is contagious and inspiring! 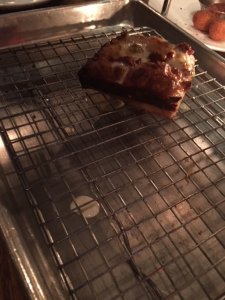