I want to start off 2016 by telling you all about my meeting yesterday with author Simran Sethi, who’s recently published book, “Bread, Wine, Chocolate: The Slow Loss of Foods We Love,” is destined to join the books of Michael Pollan and Dan Barber as must-reads for anyone interested in biodiversity and sustainability. Her book, loaded with important information about the fragility of our ecosystem and food chain, is also lush with great food writing and tasting strategies for how anyone can access the subtle flavors  and regional distinctiveness of chocolate, coffee, beer, wine, and, of course, bread. More importantly, while the book is alarming as it reveals how close we are to wiping out vital species of animals, insects, fish, grains and other foods, and also the essential micro-organisms in the soil and the sea, it also provides hope and a way that each of us can help effect a transformative change. I’m working on a full scale book review that I hope to post later, so I won’t say more other than to suggest you take a peek at Simran’s webpage and, perhaps, her Amazon page. http://simransethi.com/  and  http://www.amazon.com/Bread-Wine-Chocolate-Slow-Foods/dp/0061581070/ref=sr_1_1?s=books&ie=UTF8&qid=1452131884&sr=1-1&keywords=Simran+Sethi

Simran and I appeared on a local NPR interview program called Charlotte Talks, where we discussed these issues and tasted some great chocolates, and sipped locally roasted coffee (from Boquette Mountain Coffee) made with fair trade and hard to find beans. To listen to the podcast of our show go here: http://wfae.org/programs/charlotte-talks-wfae  and navigate to the Jan. 5th show.  A very lively hour (actually, only about 48 minutes of actual show, since the station breaks and promos have been removed).

After the show I gave Simran a tour of the Charlotte Johnson & Wales University, where we had lunch in the International Dining Class, where the menu of the day was Southeast Asian (some great Curry Laksa and Pad Thai, among other dishes). After lunch Simran had a chance to meet some of our chef instructors, including Armin Gronert, who was teaching his chocolate class (yes, more chocolate tasting for us!) and, then, Chef Harry Peemoeller with his Advanced Artisan Breads students. At the end of the tour we had just enough time for a quick duo-selfie, for your eyes only (see below).

There is a reason I’m writing about this instead of about pizza and the upcoming Global Pizza Summit (which I will write about next time): Biodiversity, in all its various permutations and expressions — like sustainability, Slow Food, the Green Movement, the Locavore Movement, etc. etc. — is, despite the overkill and numbing cliches, is the single most important issue facing human-kind at this moment. Some might say that that statement is arguable, but I say it’s inarguable (well, it’s my blog after all but, then again, you have a chance to respond and chime in on this). However, rather than buzz-kill the moment by saying any more, let me leave you with this advice: Go see the movie “The Big Short,” which explains the economic crash of 2008, caused by the junk bond “house of cards” so clearly and frighteningly that it will leave you scared, upset, and, mostly, angry. Now, when you see this movie (or read the book by Michael Lewis, upon which it is based), think of it as also the perfect analogy for the teetering ecosystem that is this earth. When the foundation begins to crumble, the whole structure comes tumbling down, as it did with the economy. And it’s real and it’s frightening, and it’s global.

The wonderful thing about Simran’s book, however, is that it offers an empowering vision for how to turn things around before it’s too late, via a transformative act called eating. So, you can be motivated either by the fear that the world’s ecosystem is just minute’s away from total collapse (a great motivator, basically), or by a more hopeful vision (a preferred but rarely experienced motivator, though we count PizzaQuest as falling into this category).  Bread, Wine, Chocolate offers both forms of motivation by scaring us and also inspiring us. Check it out. 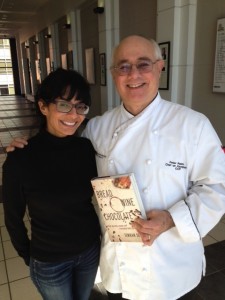 Author Simran Sethi and me in the hallowed halls of Johnson & Wales University. (photo by Melinda Law-Westmoreland)