Peter’s Blog: Back from Texas and a Visit to Home Slice Pizza

I’m back from a fun and exciting trip through Texas, which entailed visiting five cities in five days, teaching artisan bread classes at the Central Market Cooking Schools in San Antonio, Austin, Houston, Fort Worth, and Dallas. By exciting, I mean that on Sunday, while I was teaching my final class, in Dallas (and while the Cowboys were getting beat by the Packers in an amazing finish, just up the road from where we were doing the class), we were also told that the city was now under a tornado watch. It was all very surreal: the Cowboy fans were stunned by the dreaded last second field goal, and I was later told that they were not allowed to leave the stadium at first because of the pending tornado). The barometric pressure seemed unbearably depressed yet the air was tropically humid, and lightening bolts were coming down in a circle all around the city. As I walked to my car after the class I felt like I was in the eye of a hurricane; hundreds of unseen birds were chirping like crazy, which made me feel like I was in an Alfred Hitchcock movie. By the time I got to the hotel the winds had picked up considerably, so I hunkered down in my room which, unsettlingly, was on the top floor so, a few times, I felt the building sway but, lo and behold, an hour later the tornado watch passed north of us, headed for Oklahoma (why does Oklahoma always get the worst of these things?), and things settled down. So I watched the end of the other game, which the Steelers held on to win against the Chiefs. My team, the Carolina Panthers, was out of the playoffs, so I have no dog in this race, but I do have friends living in Charlotte from Pittsburgh and who may now host a playoff party, so I guess it worked out for them and maybe for me if I get invited. (Meanwhile, early prediction: the Panthers will be back in the Super Bowl next season — they are historically an every other year team so remember these words next year at this time: we’ll be baaack….).

Okay, back to Texas: Before the tornado watch added its exciting garnish to my eventful week, I had the chance to visit with Phillip Korshak, the visionary partner and head chef/pizzaiolo at the legendary Home Slice Pizza in Austin.  I’m not going to say too much here because Phil agreed to let me interview him for a future posting, but I wanted to tell you a few things about the amazing time I had there. Phil is a New Yorker, former writer and musician (well, there really is no such thing as a former writer or musician — he is still both of those things), who has helped grow Home Slice into a must-go destination pizzeria for both locals and visitors. They crank out about three thousand pies and slices a day as well as killer cheese cake, tiramisu, and chocolate chip cookies — always served with a glass of milk — and, Phil insists, the cookies must be dipped into the milk before eating, the way he was taught as a kid.  We’re going to explore this more fully in the interview, but this gets to the cruxt of the visit and why it fits so perfectly on Pizza Quest. 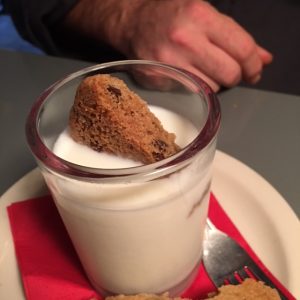 The staff will even remind you about dipping the cookie!

For Phil, and I think for many of our PQ followers, pizza is not just pizza, and food is not just food — it is a bridge to many other places, especially to memories, as well as to hopes and dreams. As we often say here, Pizza Quest is more about the quest than it is about the pizza and this was clearly evident as we ate ample amounts of pizza, both New York Style and Home Slice’s signature Sicilian, as well as a juicy hoagie on a house made sesame seed roll, and three of his favorite desserts. As we ate, Phil took me over his own bridges, through each of the foods, explaining to me how they connected to those other places, to his past. He took me into his thinking process and the choices he made when creating the doughs, textures, flavors, and every menu choice. He took me along on his quest, not only through his words but also with each bite.

For Phil, the whole point of feeding people is take them on such a journey and to help them connect not only to his own taste memories but also to their own. The fermentation method he uses for his New York pizza, for example, is somewhat radical because he ferments the dough for 72 hours — way longer than most pizzerias — because he determined that it took this long to transform the texture of the crust to just the right creamy-yet-crispy-snappy balance, while still using the classic high gluten flour favored by New York pizzerias.

I could go on and on about these choices but I’ll save it for the interview, coming soon, so that Phil can explain it in his own words. Bottom line: this approach and vision is obviously working, as Home Slice employs dozens of dedicated workers and encompasses two buildings, next door to each other, to handle the overflow of business. Those of you from Austin, or have been there, can chime in below in our comments section, if you’d like, but from what I saw and tasted, the principle of connectedness, of which I’ve written extensively both here on Pizza Quest and in my books, is alive and well at Home Slice. More on this in the coming weeks…. 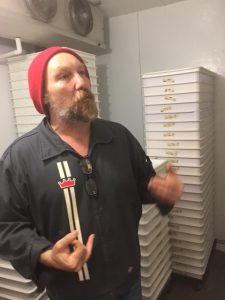 Philip is one of a kind…such an inspiration. Love his pies and his passion. Just finished a drive from Houston to Austin before flying home to NorCal…that state sure knows how to put on a storm!!!

72 hours at what temperature ?