Note to readers: This is an excerpt from my book, American Pie: My Search for the Perfect Pizza (Ten Speed Press). This recipe is one of my most requested and I think it rivals any pesto recipe I’ve seen or tried anywhere. Let me know what you think when you try it.

When I first discovered pesto about 35 years ago I thought the heavens had opened and revealed a very special secret. It was so new to Americans then, and now it’s so familiar and has been overused in so many ways that it runs the risk of being a culinary cliché. But throughout my travels in Liguria and Genoa (and thus the term Genovese), where it has been a staple for centuries, nobody seems to tire of it and my passion for it was born anew. The problem with much of the pesto of recent memory in this country is its lack of brightness–not just in color but brightness as a flavor tone. That’s where the lemon juice makes the difference in the recipe below–it’s my secret ingredient.

My favorite pesto memory in the United States was at the legendary Caffe Sport in North Beach during its glory years in the 1970’s when Tony Latona was alive, roaming back and forth between the kitchen and the dining room. His pesto was bright green, the basil flavor exploded in my mouth, carried by the cheese and pine nut base notes. A lot of restaurant pesto now is a dull green, thick and pasty, the flavors locked up, trapped in the cheese. It had been a long time since pesto sent me into ecstasy but when it was served to us at Ristorante da Vittorio in the town of Recco over some toothsome troffie pasta, I felt as though

time had compressed and I was discovering it anew, like my first time at Caffe Sport. 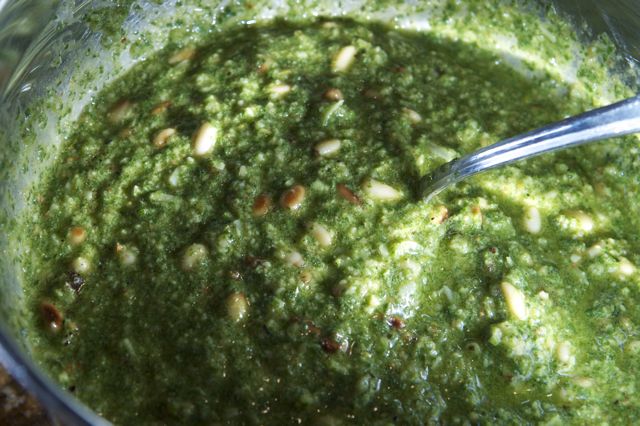 The following recipe can be baked directly on top of focaccia or pizza, or drizzled over it after it comes out of the oven (my preferred way to use it, just as you would over pasta). You can also use over any kind of pasta and also with grilled chicken. At home, we often make bruschetta with pesto and freshly diced heirloom tomatoes and just a sprinkle of coarse sea salt. Or, when no one’s looking, just slather the pesto on some fresh bread and have at it!

8 cloves fresh garlic, minced, not pressed, lightly sauteed in a tablespoon of olive oil (to take out the “hotness”)

salt and pepper to taste

Place all the ingredients in a food processor (not a blender) and process for about 30 seconds, or until smooth. Add more olive oil if it is too thick; add more grated cheese if it is too thin (lately, I’ve been using Bel Gioioso Grana for my dry aged cheese needs–nice flavor and acidity). Add salt and pepper to taste, but the cheese provides enough salt for most people, and pepper is optional.

An option is to hold back half of the toasted pine nuts and grated cheese and fold them into the pesto after it has been processed. This adds another layer of texture–little flavor bursts of toasted nuts and salty cheese. (Note: you can substitute toasted walnuts for the pine nuts if you prefer)

Keep the pesto in a tightly covered container in the refrigerator. It will be good for up to a week. If the top surface darkens, this is just oxidation–simply stir it back in–it should be bright green underneath, However, if you freeze it, it will remain bright green until you thaw it, at which time it will darken throughout (more oxidation). You can still use it but it won’t be as vibrant looking (but dark pesto is better than no pesto at all–perhaps stir in a little lemon juice). You can also replace some of the fresh basil with other fresh green herbs, such as parsley or arugula or a very small amount of stronger herbs such as fresh oregano or marjoram.  Roasted red peppers can also be substituted, to taste.

You seem like a very good chef Peter!I will try it soon

Can i use other nuts than pine nuts?

Decades ago I was working an installation around the corner, returned from a break to find two kitties in the entry, put them inside for safety, put out the word, and went back upstairs to work.
Two hours later calling from the sidewalk, stout Italian guy & wife in grey wool coat on a warm afternoon.
Tony. The health department had visited. Got his babes back. Me and my girl got dinner – and I got to sit in the kitchen to chat & watch when I next came by for lunch.
Said hi to the kitties, but they didn’t remember me – ungrateful wretches.

I agree that Caffe Sport has the best pesto I’ve ever tasted. When I’m in SF I make a point of going there just for that!
Your recipe sounds like good, solid pesto and I will try it – but it doesn’t sound like it will produce the same creamy pesto that is unique to Caffe Sport. I wonder if they add cream to theirs(?).