Note from Peter: I met Mike Kurtz at Pizza Expo in Las Vegas a couple of years ago and became fascinated with the exponential growth of the product he created, Mike’s Hot Honey, especially when I served as a judge at pizza competitions and noticed how many competitors were using it on their pizzas. As a specialty product, it seemingly tipped over into ubiquity rather suddenly. When someone creates anything that becomes “an idea whose time has come,” I can’t help but wonder about all the factors that converged to make it happen. A so-called “overnight success” usually has a long gestation on its way to suddenly becoming “hot,” so I wanted to hear directly from Mike himself how this all came about. Here’s what I learned from the Hot Honey King (photo credit to Gabriella Bhaskar): 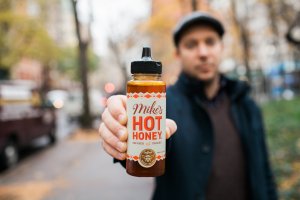 Mike Kurtz and his Hot Honey

PQ (Peter):  By now, a lot of our viewers have heard of Mike’s Hot Honey but may not have tried it yet or know where to find it. Can you give us the back story on how you created it and, also, your brand?

Mike: Many people don’t realize that the inspiration for Mike’s Hot Honey came from Brazil. As a college student, I was a Portuguese major and spent a year studying abroad in Northeastern Brazil.  While living there I visited a small pizzeria that had jars of honey with chili peppers in them for drizzling on the pizzas.  I loved the flavor combination and when I returned to the States a year later I started experimenting in my college apartment, testing out different methods for infusing chili peppers into honey.  After testing out a range of different infusion methods and types of chilies I eventually settled on the recipe that we still use today. 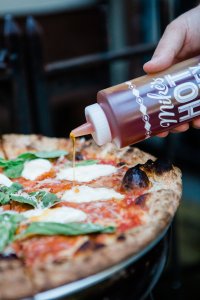 Even on a classic Margherita pizza!

For years I made it just for my own personal use to drizzle on top of pizza. Around the holidays I would make a big batch to give out to friends and family.  From Day One I called it Mike’s Hot Honey.  I moved to NYC in 2005 and started working for a record label.  I always kept a bottle of MHH in our break room at the label.  It remained a hobby until 2010 when I first met Paulie Gee.  I was an avid reader of the Slice blog on Serious Eats and read about his opening in Greenpoint, Brooklyn. At the time, I was making lots of pizza at home.  When I visited the pizzeria, I met Paulie and we struck up a conversation about dough, his oven etc.  He invited me to start coming in after my day job to apprentice.

I started practicing at the pizzeria after work. Eventually I got skilled enough to start working dinner shifts making pies.  I brought in a bottle of MHH for Paulie to try and he liked it and asked if I could make enough for the restaurant to start using it on their pies.  It got added to the menu in the summer of 2010 and was a hit.

PQ: I was listening to you and other pizza luminaries on the Zoom Pizza Party web broadcast in March, and I sensed that you and Paulie Gee have a special kind of relationship. What has Paulie meant to you in terms of the bigger picture? 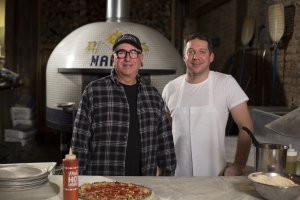 Mike: Without Paulie’s encouragement I don’t know if my business would exist.  When I first started making MHH for his pizzeria and moonlighting there making pies, I was still working full time in the music business.  I started to see an opportunity to expand production of the honey but I was afraid of leaving all of the years I had dedicated to my career in music behind to pursue something new.  I was only in my late twenties but I had it in my head that it was too late for me to change gears.  Witnessing Paulie in that first year at the pizzeria was powerful.  He was so happy and fulfilled running the restaurant, feeding his customers every night.  He had taken the plunge at age 57 to open a pizzeria with no prior experience and, once I saw his success, I knew it wasn’t too late for me to pursue a new career.

Today Paulie and I are neighbors in Greenpoint.  He is Mike’s Hot Honey’s biggest supporter and ambassador.  Many of my customers were first introduced to MHH at his restaurant. He has no formal stake in my business nor I in his but we always support each other.

I’ve learned a lot from Paulie over the years.  He showed me the power of commitment.  That if you commit to something and the people around you see that you have committed to it, they will be there to support you.  He is also is a testament to the power of building community.  Paulie wears a different cap every day but almost never his own.  He’s always wearing the hat of another pizzeria.  He constantly promotes the local businesses and people around him and they in turn reciprocate the love.  I’ve even learned some driving and life lessons from him too, like, “Speed to the light, not through the light.”

PQ: Many of our followers know you in the context of pizza. But what are some other great ways to use your honey? Do you have three favorite non pizza applications that you can share, and how can folks write to you for some recipes? 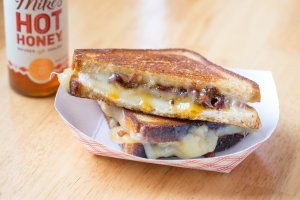 Great on grilled cheese or chicken — or both!

Mike: Pizza is absolutely the native habitat for Mike’s Hot Honey.  That’s where the product was originally intended to live, but there are many other great pairings.  I recommend trying MHH mixed into a cocktail, paired with a sharp cheddar or stinky blue cheese, drizzled over fried chicken or a plate of roasted veggies. The possibilities are truly endless and that’s been one of the joys of the business for me.  Folks can get more recipes by visiting the recipes page on our website at www.mikeshothoney.com or by checking us out on Instagram @mikeshothoney. 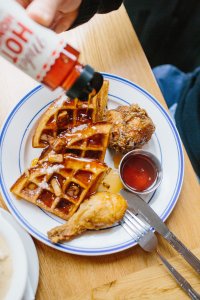 Of course, chicken and waffles are a natural.

PQ: I love it drizzled over grilled or baked salmon and also with chicken wings. But, Mike’s Hot Honey is one of many new products that have come out in the last few years that illustrate the ingenuity and entrepreneurship of both American and International food artisans.  Do you see any other new products that seem to have caught the zeitgeist and could possibly go big or make an impact on the pizza or food community? 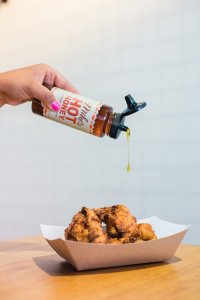 On fried chicken or wings — amazing!

Mike: In terms of the pizza community I see a lot of innovation with regard to ovens.  The emergence and availability of high heat electric ovens in the US has made a big impact for restaurants and home pizza enthusiasts alike.  And some of the smaller, home-use gas ovens have made it possible for folks to make great Neapolitan style pizzas at home without building or owning a large wood burning oven.

As far as new products go, I’ve been really impressed by NUMU, the vegan mozzarella that’s been showing up at some restaurants in NYC.  Prior to trying NUMU, I’d never had a vegan mozzarella that came anywhere close to the real thing.  I’m also seeing more American food producers really dial in on perfecting a single product like Salvatore Bklyn, a Brooklyn-based ricotta cheese producer. They make the best ricotta I’ve ever had. 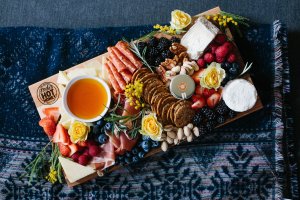 With all sorts of cheeses and appetizers.

PQ: How do you envisage growing Mike’s Hot Honey and do you plan to add any new products to your mix?  Where do you see the company in, say, 5 or even 10 years from now?

Mike: Right now we’re focused on rolling out new pack sizes for special usage occasions.  Our business is split fairly evenly between retail and food service.  Working with restaurants has always been the backbone of our business.  As restaurants adapt to the new environment in which we find ourselves we, too, must adapt.  This spring we’re rolling out new dip cups designed to accommodate an increase in takeout and delivery.  You’ll see the dip cups as well as our packets showing up more at restaurants and pizzerias.

Farther down the line you’ll start to see more line extensions that build off of the core flavor of our original product.  I can’t reveal what we have in the pipeline just yet but we do have some stuff in development that you’ll see in the not so distant future! 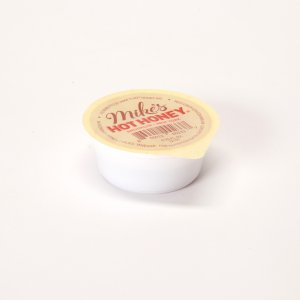 Dipping cups is one product extension.

PQ: Is there anything you want to say to our viewers, any life lessons you’ve picked up in terms of growing a business, treating people or how to be treated, and your outlook for the future?

Mike: I mentioned this earlier but I’ll say it again:  there is real power in commitment.  If you’ve been considering starting a business I encourage you to go for it.  Once your community sees that you’re all in, they will support you.  You’ll make some mistakes but you can often learn more by trying, failing, and iterating than by spending a lot of time fine-tuning your business plan without putting it into action.

And spread love, kindness, and show compassion whenever possible.  The world needs this now more than ever.

PQ:  Thanks Mike!  Can’t wait to see you at the Atlantic City Pizza and Pasta Show in September, and in Las Vegas next year at Pizza Expo.  Congratulations, again, on all your success!  See you in September! 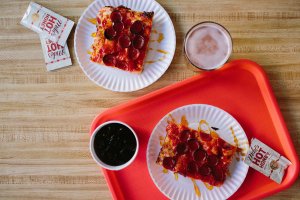 With pizza and pepperoni — a marriage made in honeybee heaven!