It’s So Obvious…Or Is It?

Note from Peter:  I recently had the great honor of spending two full days in NYC with John Arena and a host of other pizza luminaries at the World Pizza Summit and Caputo Cup Championships. I was going to blog about it but John did such a great job that I am ceding the floor to him here. Weeks later, and I’m still digesting all the great pizzas and other food we had, and also digesting the whole experience, the array of passionate pizza devotees and creativity and knowledge, and the generosity of our hosts, Orlando Foods, Caputo Flour, and Ciao Tomato Products. So I’m going to sit back and let John tell you more. Take it away John…

A few weeks ago I had the privilege of attending the 2 day Caputo Cup and World Pizza Summit in New York City. The event is open to everyone and if you’re serious about a career in pizza or just want to hang out and exchange ideas with a bunch of real pros and pizza fanatics you will want to save the date for next year as soon as it is announced.

This year the presentations included a great line up of pizza VIP’s. Among the many highlights: pasta making with 2 Star Michelin chef Gennarro Esposito; a burrata making demo by renowned pizzaiolo Roberto Caporuscio; and insights from Pizza Today publisher Pete Lachapelle, Tutta Bella founder Joe Fugere. Also, Australian pizza star Phillip Bruno, our own Scott Wiener, and Pizza Quest founder and driving force Peter Reinhart all brought their A-game with important observations about the search for pizza perfection. If that wasn’t enough, the always amazing Giulio Adriani turned his considerable talents to the task of combining the best elements of the New York and Neapolitan versions of pizza that promises to usher in a new era of cooperation between pizza makers of the world’s two most popular styles. On a personal note, Giulio graciously invited me to collaborate with him for a presentation, which was both humbling and enlightening. 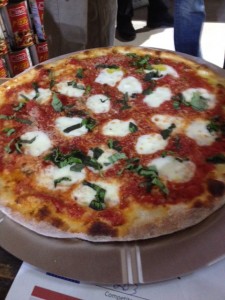 Caputo Cup Magherita-type NY-Style version — quite nice but still not the winner.

Of course no gathering of the pizza tribes would be complete without a little friendly competition and this year we had some excellent and passionate pizza makers in both the Neapolitan and New York divisions. It’s always a great learning opportunity to participate in events of this type and I was thrilled to be selected to judge the New York division alongside Pete LaChapelle and Peter Reinhart. Now, I know that most readers are never going to enter a pizza making competition but in my opinion these contest offer a great chance to reflect on just what makes for a great pizza and alas what doesn’t.  So after sampling dozens of pizzas and having a chance to observe and question each of the pizza makers about their pizza and their methods these are my thoughts:

Old timers (like me) take it for granted that everyone understands the basics of pizza making. As the inimitable Tony Gemignanni maintains, “Respect the Craft.”

So what are the fundamentals of our craft? It’s really pretty simple and comes down to 3 points.

Seems obvious right? But you would be surprised how many pizza makers focus on one component and neglect the others. 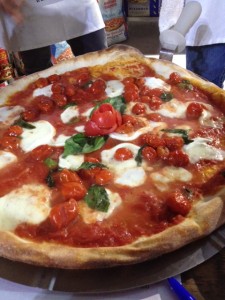 So, for all of you equipment geeks out there take note: It’s not just about having a great oven; you also have to know how to use it properly. In the case of deck ovens that are common in NY style pizzerias KEEP THE DAMN DOOR CLOSED! Every time you open the door the temperature drops. The longer it’s open the worse it gets. Don’t put pizzas in the spot where a pizza just came out. Baking is about correct temperature.

If ingredients are your thing remember that a pizza is all about balance of flavors and that means restraint. More than one pizza has been ruined by the “more is better” theory of pizza making. If you’re sourcing cheese from a near extinct breed of cows let that cheese shine (last year’s champ, Nino Coniglio, is a master of using ingredients properly). Always remember the basics of flavor enhancement. Sometimes, something as simple as a bit more salt can make all the difference between good and great. 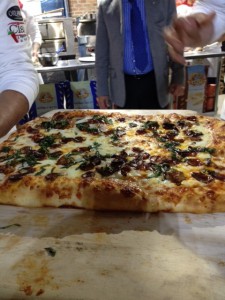 Caputo Cup Sicilian-style (aka Grandma Pizza) — nicely done but still not the winner!

Last but not least take the time to learn how do it right. The methods of one style don’t always apply to another pizza variation.

Don’t try to build an 18 inch NY-style pie on the table and drag it on to the peel like the Neapolitans do. There’s a reason why NY style pizza makers build their pies on the peel. A few simple movements can make all of the difference in the world. All styles of pizza have unique textural components. More than one competitor would have benefited from “stoning’ their pan pizza. The simple act of removing the finished pizza from the pan and placing it on the oven stones for 20 seconds will crisp up the bottom and can take a Sicilian pizza from good to amazing.

So this year, as expected, the winner nailed the three basics and came through with a pie that was well executed, balanced and displayed the pizza maker’s understanding of how all of the components can be brought together to make something really special. Congratulations New York Style Caputo Cup Champion Norma Knepp. You shocked the world by sticking to the basics and respecting the craft.  (Note: Peter told me he plans to interview Norma soon for an upcoming Pizza Quest post, so keep an eye out for that — he’ll add a photo of her winning pizza when he runs the interview.)

Thanks so much for the congrats John! Never thought that would happen.