Note from Peter: Douglas Michael, founder of “Columbia County Bread and Granola,” is all-in on sprouted grain. I, too, am a big believer in the many benefits of sprouted grain (I’ve gone on record saying that I believe sprouted wheat is the future of bread), and am a fan of Columbia County’s breads and snack crackers. Recently, Doug sent me some of his new 100% sprouted wheat pizza crusts to try out. So, I topped one simply with sliced muenster cheese and a drizzle of fresh pizza sauce and cooked it up until the cheese melted and caramelized in an old toaster oven in the break room of the office suite at Johnson & Wales University where I work. Pretty unfair to the crust, I agree, but it was a spur of the moment idea and I wanted to see how my office mates would react to the crust, especially if I didn’t tell them it was made with only pure sprouted wheat mash and starter. Lo and behold, everyone who tried it loved it and asked for more. They especially loved the complex tangy flavor and the way it crisped up — and in a creaky old toaster oven, no less!!  Yeah, it was definitely a hit, so I invited Doug to share a little bit of his story with us here on Pizza Quest, and invited him down to Charlotte for the upcoming International Symposium on Bread on June 12th -14th, to meet other important and creative bread innovators. I’ll report on this gathering, our third annual Symposium, in an upcoming post. But, for now, here’s Douglas Michael to tell us his story (see contact and catalog info for the bakery at the bottom of the article; they ship a lot of their product by direct mail order):

Can Bread Made Without Flour Be Better? We Think So.

Anyone following baker blogs and industry predictions on the next big trends in baking will know that sprouted grains has been right up there with clean labels and locally sourced flour. We made the decision ten years ago to hew to sprouted grains only. And, by making that commitment, we weaned off flour entirely, then nurtured a unique sprouted sourdough starter.

Our bakery is located in rural PA; an area of rolling hills, covered bridges, and small river towns born of old mills and granaries, but where, nowadays, micro breweries are endemic, while artisan bakers remain something of an anomaly. Yet here we are, making it work even if the bulk of what we bake – bread, crackers, pita, and pizza crusts – gets shipped off to customers far and wide. 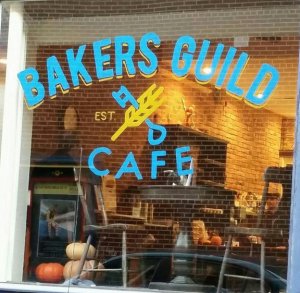 Our flourless process is fairly simple, yet seemingly difficult to master, so I’ll start with what I consider the organizing principal behind what we’re doing. And that is this: the wheat berry is the only grain I know of that can be transformed into something as delicious and sustainable as bread with just one added ingredient – water.

By soaking wheat in water, a process kicks in that begins the transformation of grain into that of a nascent plant – wheat grass. After about 24 hours of soaking and rinsing and soaking again, we look for what’s called the radial or small white nub that soon appears, and what would, in time, become the plant’s root system. This white dot tells us that the grain has come to life. Within that transformation, a number of things are taking place, including the release of sugars that then instigate the activity of microflora – bacteria and wild yeast. We can see this in the water the wheat is soaking in, as it turns foamy. Fermentation has begun. 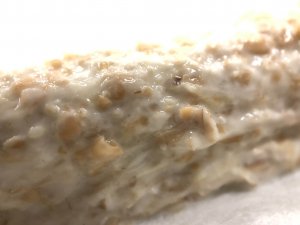 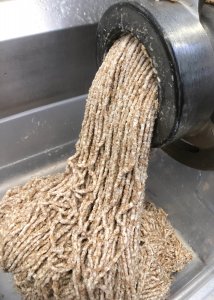 Mash made from sprouted wheat berries run through a meat grinder.

At this point, we drain the sprouted grain and run it thru a pair of grinders that process the berries into a coarse sprouted mash. We then boost the rate of fermentation by adding our starter – the very same ground mash that we make everyday that has been set aside and allowed to culture and ferment over time. Again, even here, all we’re working with is wheat and water. Then, we do add a small of amount of salt. Salt not only helps capture the natural flavors, but also creates electrostatic bonds within the dough’s structure so that the dough has a better chance of remaining stable and holding its shape. If you were to walk into our bakery at this stage, we’d look pretty much like any other bakery, except where you would expect to see bakers dusting their work bench with flour, we’re misting everything down with water spray bottles. 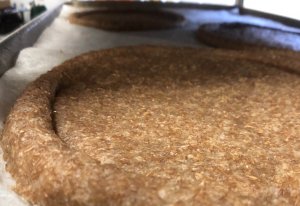 To create our pizza crusts, we section off 8-ounce rounds that are pressed and formed. The dough is then docked and sent into the ovens for a quick par bake, then cooled and packaged. The crusts are delivered to our café where they are topped with customer choices, then baked to a golden crispness. One of our favorites is a breakfast pizza – our crust topped with lightly scrambled eggs, artisan cheddar cheese, fresh tomatoes, kale, and our own unique “bacon.” We say “bacon” because we find that our sprouted bread dough, when properly seasoned, rolled thin, then baked and cut into strips, produces an amazingly and tantalizing unique alternative to the real thing. For us, it really is all about the sprouts. 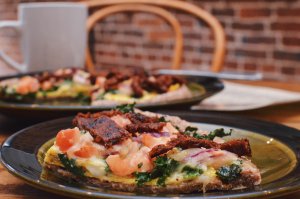 From Peter: For more information, check out the Columbia County Bread website at: https://www.columbiacountybread.com/  Try their granola and crackers, as well as their pizza crusts and breads. Their products are unlike any other sprouted dough products I’ve tasted, so do let us know here in the comments section what you think. 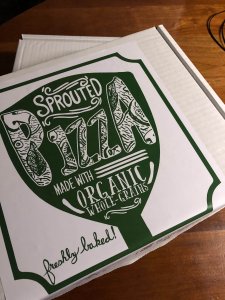