Note from Peter: This month, our regular guest columnist, John Arena, continues his exploration of pizza authenticity in its broader context. As you read the description of his recent “Dream Team” experience in Naples, if you are at all like me (and many of you are), you will wish you could have been there with him. If you’d like to meet John in person, come to the Global Pizza Summit in NYC on Jan 11th and 12th (https://3cc1ec20.campgn3.com/Caputo-Cup-2 ). I plan on being there too.

So, what do you say when you get a call from the premier Italian flour company to visit their mill in Naples and make pizzas with three of the worlds best pizza makers? How about if they up the ante by also inviting Scott Wiener, America’s top pizza historian?

Well, my first thought was that if you have the “Three Musketeers,” Giulio Adriani, Michele D’Amelio and Tony Gemignani , with Scott playing the role of D’Artagnan, why would you want to have me tagging along? Of course my next reaction was to start packing my bags.

You see, if the pizza world had a baseball team this is a line up the likes of which hasn’t been seen since the Murderers Row of the 1927 Yankees. To start with Giulio, the guiding force behind a wide array of pizza concepts, is a double threat, combining creative genius with an amazing palate. Tony stands alone as the most versatile and talented pizza maker America has produced. Scott Wiener brings tireless energy, disciplined research, and broad knowledge of the American pizza scene. Lastly Michele, who is an International champion in his own right, quietly works his magic, observing, helping, and then offering strategic observations at exactly the right moment. 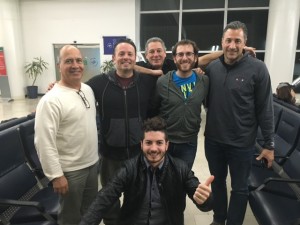 Clearly this was an adventure with epic potential. What I hadn’t realized up front was that Antimo Caputo and his family-run flour company in Naples, was actually giving us an opportunity to make pizza history. Exaggeration? Nope, let’s think about it. Pizza, at its best, is the collaboration between the pizza makers and a host of farmers, producers, millers, importers and distributors. Before your pizza gets to the table a lot of things have to go right. In the old days most of our choices were dictated by availability, so the possibilities of what your pizza could be were somewhat limited. In the last few decades the world has become flatter, with high quality ingredients much more widely accessible. The problem is that in the 100+ years since America had embraced pizza, the Neapolitan original, and its American pizza descendants, had become like a group of feuding relatives with each faction refusing at times to acknowledge the merits of the other. Over the course of that separation, communication between American pizza makers and Italian producers became challenging. Sure, Americans could buy Italian products, but rarely did the producers make an attempt to craft products that acknowledged the contributions and influence America has had on the international pizza scene.

Here is where it all starts to come together. Over a year ago I received a call from Fred Mortatti and Carlo Orlando of Orlando Foods. These folks, who import Caputo flour, had a very intriguing proposition: They wanted to develop flour that will produce dough combining the pure flavors of European wheat with the crispy textures of American pizza that much of the world has come to love. As they said “Let’s bring Italian back to American pizza”

The thing that makes this proposal so unique is that, on this rare occasion, the Italians were recognizing that American pizza at its best is a valid expression of the pizza maker’s art. In effect what they were saying is, “American pizza is great, now let’s see if we can make it even better.” To achieve that aim we were given an opportunity to work side by side with Mauro Caputo, the young scientist/magician behind the wheat blends that give all of the Caputo flours their unique characteristics.

From the minute we arrived Mauro was zeroing in on the methods, equipment and characteristics common to American pizza and American pizza makers. Of course, that’s where I come in. You see, I am nothing if not common. For this new flour to succeed it had to be flexible enough to satisfy uncompromising pizza artisans like the above mentioned “Three Musketeers” and still be workable by guys like me who tend to stick to direct mixing using basic equipment. What made the whole project come together is that, once the folks at the mill were able to see how we worked and understand how an expert like Scott evaluated a proper American-style pizza, everything quickly fell into place. In fact, by day two we were pretty close and by day three we had world-class American artisan pizza coming out of the ovens. 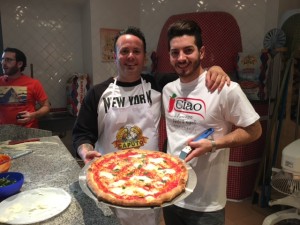 Now here’s the best part: the Italians loved the result. By the last day the word was out that something special was happening at the mill. The tiny test kitchen looked like the winning team’s locker room after the World Series. The Neapolitan press was there and people were driving in from everywhere to watch and taste. So they tasted…and then they tasted some more. Little by little you could see the nods, and then the smiles of approval and then the pizzas started to disappear.

As one old time Neapolitan food journalist said, “This tastes like a good loaf of crispy Neapolitan bread.” In a test kitchen near the Bay of Naples, the gap had been closed and the old world had acknowledged, and embraced, the new.