On Friday September 18th, 2015, still buzzing from an extraordinary day of filming with Anthony Magieri at Una Pizza Napoletana, our Pizza Quest crew reassembled at Talbott Vineyards in the hill country just outside of Salinas (“Tortilla Flats” country for you Steinbeck fans), the host site for the Forno Bravo Expo. In the past, Forno Bravo has held similar gatherings but this was my first time and also the most ambitious Expo they’d ever held. It was conceived as a two day event (Saturday and Sunday) but, really, for us it was three days, as Friday was not only a set-up day for our film crew but also a chance to do some pre-Expo filming, before the crowds arrived the following day. So, in this post and the next, I’ll describe a little of what we did on Day One, much of which we filmed and will show you in future webisodes (they are still in the process of being edited, so they’re a number of weeks and months away from showing, but there will be lots of them!). 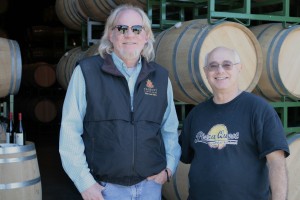 Legendary Winemaker Dan Karlsen gave us a Master Class in how to “not screw up the grapes!”

Talbott Vineyards is located in the Santa Lucia Highlands of Carmel Valley. It is about 20 miles east of Monterrey, California, so it is also influenced by the coastal climate as well as the Salinas farming belt that produces some of the great artichokes and garlic crops of the world in nearby Watsonville and Gilroy. I won’t get into too much of the winery’s history here, but if you want to learn more about Talbott Vineyards go here: http://www.talbottvineyards.com/index.cfm?method=pages.showpage&pageID=BCAC4F8E-CD73-2DB8-CD3D-F3BF8C687C92 .  When looking out over the scenic rolling hills and recently harvested grape vines from the vineyard’s guest house porch I could have easily imagined myself in Napa or Sonoma (or Provence or Burgundy, for that matter). The winery’s owners were kind enough to allow Forno Bravo (FB for short from here on) the use of the guest house and it’s surrounding buildings and grounds, where FB set up five wood-fired ovens to create a series of “demo stages” for the various cooking presentations planned for Saturday and Sunday. While all of this setting-up was taking place, our Pizza Quest team was granted the wonderful privilege of interviewing and filming with Talbott’s famous winemaker, Dan Karlsen, who took us on a tour of the fields and the winery. He also, much to our delight, took us through a tasting of the delightful Chardonnays and Pinot Noirs for which Talbott is best known. The soil and coastal climate — or terroir as the winemakers call it — is ideally suited for these particular grapes, so Dan gave us a mini master class in how he transforms these grapes into wine (we’ll show that conversation in the webisodes).

I shared with Dan what I call “the Bakers’ Mission,” which I’ve written about a number of times here in these blog postings: “To evoke the full potential of flavor trapped in the grain.”  Dan concurred that his mission is exactly the same, except his challenge is to evoke the full potential of flavor trapped in the grapes. This conversation, much of which you will see when we post the webisodes, elaborated on the notion that had emerged the previous day with Anthony Mangieri in San Francisco, the idea that cooking is an act of transformation in which ingredients are transformed (that is, radically changed), whether by the application of heat (fire, for sure!) or through fermentation, into something totally new and, perhaps, even transcendent or, for lack of a better description, a wow! This would, in fact, be the recurrent theme of the next few days, as each of our guest chefs held and expressed a personal piece of this fascinating transformation puzzle.  In this instance, my favorite moment with Dan (and there were many favorite moments with him) was his explanation of his wine making philosophy. As background, Dan first made his bones in the wine making world over thirty years ago, when California wines were just emerging and being taken seriously on the international scene. He won awards at Dry Creek Vineyard in Healdsburg (Sonoma County), also at Dehlinger Winery and again at Domaine Carneros (the Carneros is a unique micro-region on the southern cusp of land that connects Sonoma and Napa Valleys). He then moved south to Monterrey County’s internationally famous Chalone Winery, before taking the helm at Talbott Vineyards, where he (and also his son, winemaker Rob Karlsen), helped put the winery on the map. This dude’s been making killer wine for a long time (you can read more about him here: http://www.talbottvineyards.com/About/Winemaker-Dan-Karlsen ). But he neatly summed it all up, and I paraphrase here to keep it P-G, when he told us that he views his job as simply taking really good grapes and then not “screwing them up” (use your imagination here, folks but, needless to say, I love this guy!!). 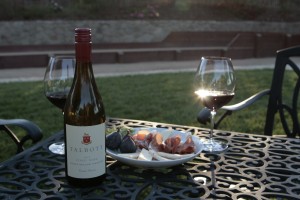 The Talbott wines we tasted were amazingly accessible and unpretentious, yet still complex and multi-dimensional. Like most art, it takes a lot of skill to make it seem so easy.

Chardonnay is not normally my favorite white wine, at least not the heavily oaky versions I associate with Sonoma and Napa, where I lived for twenty years and tended to favor the Sauvignon Blancs. But Dan’s versions were playful, light and still fruity enough to highlight the grape without much or any “oakiness” (if such a word even exists). They are wines that don’t fatigue the palate or demand to be served with food, yet are still complex and multi-dimensional enough to deliver layers of flavor. His Pinot Noirs were, likewise, light and accessible, much more like their French Burgundy role models than their richer, more tannic Napa and Sonoma cousins. We enjoyed a few cheeses and charcuterie with the wines and Dan showed us how the flavors of the wine and food affect and enhance each other (or, when not properly paired, diminish each other). Our whole crew, none of whom were true wine geeks but were happy to be willing wine students, learned a lot about wine appreciation, and got a little buzzed in the process. This was all bonus footage for us — we’d come to the Expo to explore the transformational effects of fire on food (especially on pizza) and, thanks to the generosity of Dan Karlsen and the folks at Talbott Vineyards, we also got a master class in wine making. Things were off to a great start and we still had half a day of filming ahead of us.

In the next post I’ll write more about Day One at the Expo, where we filmed in the afternoon with Vito Romani, the owner of a mobile Forno Bravo oven on wheels, fabricated by The Fire Within (you may recall the many instructional videos we’ve posted from our adventure in Boulder at the Fire Within Owners Conference a few years ago — The Fire Within is one of my favorite companies!). Vito had an amazing story of personal transformation and redemption to tell us, and his job at the Expo was to make lots and lots of pizzas for the guests while the other “celebrity chefs” did demo’s that would provide only small teaser tastings. Vito (and his team), on the other hand, cranked out hundreds of pizzas and he was one of the true heroes of the weekend. We first caught up with him after our wine tasting session with Dan Karlsen, as he was doing all his prep for the Expo, and I’ll share some thoughts about that visit, along with more about the growth of The Fire Within, in my next post. Needless to say, there are a lot of stories still to tell….