Note from Peter: Over the next few weeks I will continue to share my thoughts and memories about the Forno Bravo Expo held in September in Salinas, CA. We left off on  Friday,the day before the Expo was opened to the public, as we gathered with the Forno Bravo folks, our Pizza Quest team, our hosts at Talbott Vineyards, and a growing cast of heroes. We pick up the story at about noon….

After tasting wine and charcuterie with winemaker Dan Karlsen (see Part One) we were all feeling kind of happy, but our day was only half completed. Out of the corner of my eye I kept watching Vito Romani, the owner of his own mobile pizza company, Stella’s Pizza Pie, doing his prep in anticipation of the two big days ahead.  Until we all arrived at Talbott Vineyards, Vito and I had met only via e-mails, kicking around some ideas for what pizzas he would make. Vito, who operates in the San Diego area, is one of many Fire Within mobile wood-fired oven owners around the USA and Canada. He brought along his brother, Derek, and also had the help of a potential new oven owner named Joseph, who was in full immersion mode, testing the waters to see what it would take to get into the mobile pizza business (Joseph is an immigrant from Africa — I believe Uganda — now in search of the American Dream. More about him and his own journey when you see the videos in a few months). Also along were Vito’s lovely wife, Sara, and their beautiful infant daughter named, you guessed it, Stella. It was like a traveling, westward-ho, covered-wagon entourage, only it was all happening around a wood-fired oven on wheels.

What I hadn’t expected to learn, till Vito and I had a chance to get to know each other, was what an amazing journey of recovery and re-invention — you might even say, of resurrection — that he has been on. We ended up filming a long interview with him, that we’ll put up on the site once we get into the Expo webisodes, but here, in his own words, is what Vito told me: 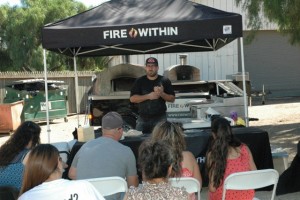 Vito Romani, sharing his journey with the crowd before serving them his superb pizzas.

My journey started as a young kid, cooking with my grandmother in her kitchen. I come from a long line of Sicilians and I learned my craft organically from growing up in a kitchen full of Sicilians. My dad owned small restaurant franchises, where I worked throughout my teenage years. I planned on going to culinary school, but I hurt my back in a snowboarding accident and went through several surgeries and years of physical pain. Through all the pain medication my body became dependent on opiates. In 2007 I decided to go to treatment in Los Angeles, where my journey in recovery began. After getting my life back on track, I decided I wanted to help other people and give them the same opportunities I had in recovery. I became an addiction counselor and worked with young adults and adolescents for 7 years. Wanting to get back to my roots in cooking, in early 2013, I began doing research on what my next step would be. I learned about Fire Within and thought it was a great opportunity for me to be my own boss in an environment where I could work independently at my own pace and still hold down my full time job. In 2014, in a leap of faith, I ordered a wood-fired oven rig from Fire Within and attended their getting started workshop. It was one of the best experiences ever, as it gave me all the tools I needed to go out on my own and feel confident in my business. I decided to name the business after my daughter because she is the inspiration behind it. After about 10 months of owning the oven I was able to quit my full time job and throw everything I had into my passion for cooking and am still able to give back to the community by participating in different events around town.

After we filmed with Vito, he made us two of the original pizzas that he’d be featuring throughout the weekend (of course, we filmed it all so — more teasing, sorry — you’ll get to see these in a few months when the segments run). One is called The Volcano, made with roasted pineapple, spicy soppressata, fresh jalapeno peppers, mozzarella, and Dinapoli-Bianco pizza sauce. Basically, it was Vito’s take on the always controversial Hawaiian Pizza (no matter how many purists pooh-pooh pineapple pizzas, I think some of the best pizzas I’ve had in the past few years turned out to be variations of the Hawaiian. See one of our first webisodes, with Nancy Silverton at Pizzeria Mozza — it’s also featured in the sample video at the top of the Home Page called Pizza and Obsession — in which she blows away some serious food writers (including Russ Parsons, of the LA Times, and Kristine Kidd, of Bon Appetite) with her version of Hawaiian Pizza. Hey, pork and pineapple — it works!!

The other pizza that Vito made for us he calls The Fresh King. It features a topping of fresh arugula tossed in lemon juice and garlic olive oil, on top of prosciutto, ricotta, mozzarella, and more of that great DiNapoli-Bianco sauce. The lemon and garlic olive oil dressing was a revelation, and made all the flavors of this beautiful pizza pop. Throughout the Expo during the following days Vito made these and a few other inventive pizzas, probably cranking out about 200 pizzas each day. His team was clicking like a well-oiled machine and, needless to say, the crowds went wild.

In the next Peter’s Blog I’ll continue recounting some of the highlights of the Expo, including the arrival later on Friday of our beloved friend John Arena, who became, from my perspective, the Yoda of the Expo, sharing a lifetime of wisdom, life lessons, great quotes, and pizza techniques. As I hope you can tell, it was a very special few days, so I’m doing my best to describe some of my memories with you because, well, I wish you had all been there with us. So, thanks for hanging in there with me on this vicarious ride and for being part of this ongoing quest. More soon…. 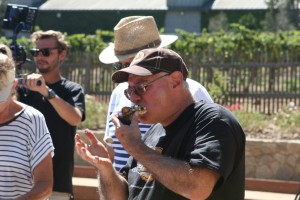